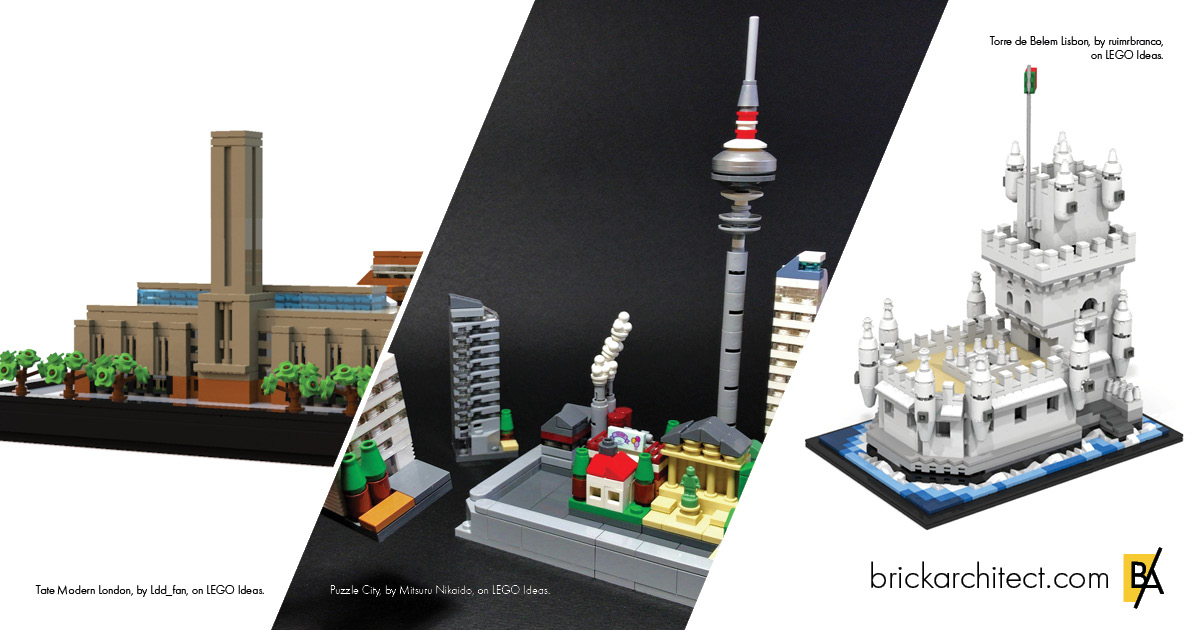 The LEGO Ideas website has many fascinating fan-made LEGO creations. I’ve highlighted my five personal favorite architecture projects, along with a few favorites from other Brick Architect contributors.

This project highlights the front facade of the current Alamo. The builder uses some interesting parts for detail—I particularly like the gears used on the front. The Alamo, by jhlavenka, on LEGO Ideas.

The ground is made by putting slopes sideways and not connecting them, so that it looks like a cobblestone path. The use of hinge pieces to make the arch in the back is also a nice change from normal arch pieces. It is smaller than minifig scale, which is slightly disappointing. It seems really accurate for the actual building and has nice detail, including the flowering tree and flag outside. Back of model, The Alamo, by jhlavenka, on LEGO Ideas.

With the re-release of the Taj Mahal set, is it fun to see a microscale version of the building. It is only 12 studs by 12 studs. While it doesn’t have as much color as the large set. It does look nice for its size. Taking after the LEGO Architecture Skylines series, this idea includes five different buildings: Abu Simbel, Philae Temple, Heliopolis Obelisk, the great Sphinx of Giza and the stepped pyramid of Djoser. The Nile is also depicted like other rivers in Skyline series. Since it is of ancient Egyptian buildings, it is mostly monochromatic, so the color from the Nile is a very nice addition. Egypt, by Micro_mini, on LEGO Ideas.

I think this a gorgeous model with a lot of detail. I like the waves in the water. Using white cheese slopes in different directions make convincing waves crashing against the structure. The towers are well done with the nose cones upside down to make the interesting shapes of the actual towers. The original Torre de Belem isn’t shaped like a square and this model captures it very well. All the details of this model are amazing.

While this set is not based on any particular building. It is a LEGO built base with buildings built on 4×4 or 2×4 plates and then placed on the base. The buildings can be rearranged and turned different directions to make different city layouts. I think the fun of rearranging buildings works well with LEGO. Those were some of my favorites. Here are some favorites from other Brick Architect writers…

Tom: “This is an excellent re-creation of the repurposed power plant that is now the iconic Tate Modern Art Museum.  I love that the model also includes the brand new addition behind the repurposed building in front.  The color palate, and faithful re-creation using a small number of parts makes this a winner in my book.” Michael: “This one is pretty special to me. I lived in Boston for many years, and my wife worked at the MFA. I love the use of panels for parts of the roof, and for low walls around the building, and the somewhat unusual choice of 1×1 bricks for trees. The Japanese garden at the back of the museum is recreated wonderfully, as is the green Chihuly glass sculpture in an interior courtyard, made by stacking Plate, Round 1 x 1 with Flower Edge (33291).” Museum of Fine Arts, Boston, by DavidBowman01, on LEGO Ideas. 7 Wonders of the Ancient World, by Ymarilego, on LEGO Ideas.

Michael: “Two projects that go together: Both the Ancient and Modern Wonders of the world. The Colosseum is a little chunky and not quite round enough, but I think the other 13 structures are very well done!” The New 7 Wonders of the World, by Ymarilego, on LEGO Ideas.

Christine: “Chaosville is a proposed LEGO board game which features some great little buildings. What I like about these sorts of Ideas is they give LEGO Architecture fans something to do with their builds and to encourage them to make a greater range of buildings including the everyday buildings of a city.” I hope you enjoyed this selection of Architecture models on the LEGO Ideas site. Visit LEGO Ideas to find even more great Architecture creations, and share your favorites by leaving a comment below!