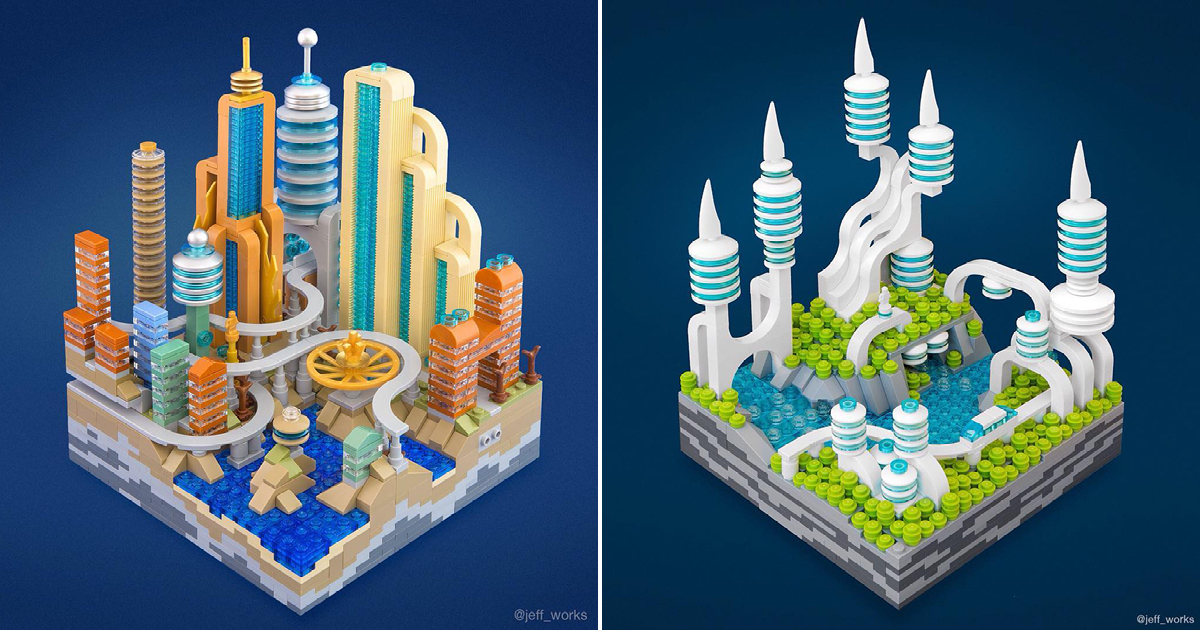 Jeff Friesen first burst on the LEGO scene with his United States of LEGO series and his recreations of the works of street artist Banksy. Now, his incredible microscale cityscapes have captivated the AFOL community — Brick Architect spoke to him about his work.

I don’t remember where I first saw the image but it was a city, filled with circular towers and elegant buildings with rounded edges. The raised roadways were constructed with curved tiles, and it all sat on base in which you could see the strata of rock and earth. It was beautiful from bottom to top, and I immediately clicked through to find out who had created it. I was taken to the Instagram account of Jeff Friesen, and I was hooked. The first of Jeff’s cityscapes that I saw. (Photo Jeff Friesen, Instagram)

What I love most about Jeff’s work is that, while intricate and detailed, they are microscale, which is an eminently do-able LEGO style, thanks to relatively low piece counts. However, working in microscale also requires finding unusual and interesting ways to use pieces, something that Jeff does so well.

When I joined the Brick Architect writing team, my very first thought was to interview Jeff. I reached out to him, a little nervous and star struck. Jeff’s friendly response came quickly, so I began to write down all of the questions I’d been dying to ask him.

Creativity and the Early Years

Jeff’s early LEGO work included The Great LEGO North, one vignette for each of the ten Canadian provinces. This was followed by United States of LEGO®: A Brick Tour of America featuring a scene for each U.S. state, which was collected into a book in 2014. BA: You are an acclaimed, widely published photographer. Does building with LEGO scratch a different kind of creative itch?
Photography is essentially arranging things with a particular vision in mind, so in that sense it is similar to other art forms including LEGO. What is different about LEGO as an artistic medium is that it’s made with precisely engineered pieces that only fit together in a specific way. That makes LEGO much different than other 3D art forms such as pottery or wood-carving, which allow for open-ended forms. With LEGO you have to find the right piece or compromise. In that sense LEGO is both an artistic medium and an engineering puzzle. It’s creative in the way architecture itself is creative. The limitations form part of the work.

LEGO is both an artistic medium and an engineering puzzle.

BA: Tell us about your LEGO career. Early building? Did you have a dark age? If so, what got you back into building?
LEGO was my favourite toy as a kid, and my childhood intersected with the original space LEGO era of blue, gray, and trans-yellow pieces. As a child, the actual LEGO building is just the beginning of the fun, and then you get to play with what you’ve made.

As an adult I’ve replaced the play phase with photography. I did go through a long dark age, though there were occasional days of light when the moment presented itself in the form of some bricks. I always remained interested in LEGO, but photography took up most of my creative energy. After my daughter came along the house filled up with toys, including lots of LEGO. My daughter was playing with “big kid” LEGO before she was 2, since she wasn’t all that into eating LEGO as some other toddlers are. When she was a bit older I used LEGO and other toys to teach her photography. After a while I started making my own builds for photography, centered around the new mystery bag minifigure series.

BA: My childhood was also filled with Classic Space sets, and they remain a favorite of mine today. Is there one particular set you’re nostalgic for?
Definitely #6970 — Beta 1 Command Base which was the centre for a lifetime of adventures.

After creating minifigure-scale vignettes for years, Jeff posted his first microscale creation on New Years Day in 2016, and created nine more in 2017.

BA: Your recent microscale cityscapes are simply stunning and are the toast of the AFOL community. What prompted the switch from minifigure scale to microscale?
As I was collecting bricks for minifigure-scale builds, they started to take up a lot of space. Also, the bricks took up some of my mental space–which is a precious commodity–because I keep a rough inventory in my head. I tend towards minimalism so microscale was a logical choice both as an art form and a storage solution. All of my microscale cities are on a 20 x 20 base (about 6 inches square). BA: Some of your buildings are futuristic, some are modern, some art deco. Is there an architectural style you prefer? Any others you’d like to try?
There is something to like in almost every architectural style. I’m working on a new style that lets LEGO brick shapes dictate the architecture rather than trying to duplicate existing architecture with bricks. LEGO can do things regular building materials cannot, so I’m trying to let the bricks point the way.

BA: How do you start thinking about a new microcity MOC? With a vision of the whole city? Imagining a piece used in a particular way?
The first stage is visualizing a certain style for the city. It’s a nebulous process, and I usually have way more ideas than can possibly be used on a 20 x 20 base. Then I start building, and often the first building that I’m happy with will change the course of the build. It may also change the landscape of the build, which is then rebuilt. From there each building must harmonize with the other, and a lot of individual builds do not survive that test. It takes a lot of experimentation both with colors and proportions. I’m not very technique oriented, but I’m very concerned with how each piece affects the look of the whole city. There comes a point in building every microcity when I just want to take the whole thing apart. There is always a difficult stage to get through. (So far I’ve only taken one apart.)

BA: Your cityscapes have incredible color palettes, which use some of the rarer colors that are only available in a small number of parts. Do you build with the colors in mind, or do the city’s imaginative shapes and forms come first?
The colors are in my mind from the very beginning. Since there aren’t many LEGO colors it’s easy to test how they relate to each other. There is something about traditional LEGO green that does not work well with digital cameras, but lime works great. I also don’t use black because it attracts dust in ways that defy the laws of physics.

BA: Do you have a favorite LEGO color?
Hmmm. It’s a tough choice. I like gray and white for the variety of parts, and rare colors for the challenge of making something with limited parts.

For a deeper look at the LEGO Color palette, check out the article Hard-to-Find LEGO Colors (and what to do about it).

BA: Are there any real world inspirations for the buildings in your cities?
Yes, it’s a massive list, but I never set out to replicate a specific building. I often think of New York when building a LEGO city, and after a while I realized it’s because New York has a very LEGO-friendly grid street layout. BA: Do you prefer building at minifig scale or microscale?
These days it’s all microscale, but the minifigures are patiently waiting for something to do.

BA: What kind of LEGO creations can we expect from you next?
For 2018 it’s all microscale cities. I going to take 20 x 20 cities as far as they can go, hopefully figuring out some new microscale window techniques along the way.

Many thanks to Jeff for being so generous with his time, and for answering all of my questions! Be sure to follow Jeff’s Instagram account to see what he comes up with next.

What kind of city would you create on a tiny 20 x 20 stud canvas? Share how Jeff’s work has inspired your own LEGO creations by leaving a comment below!