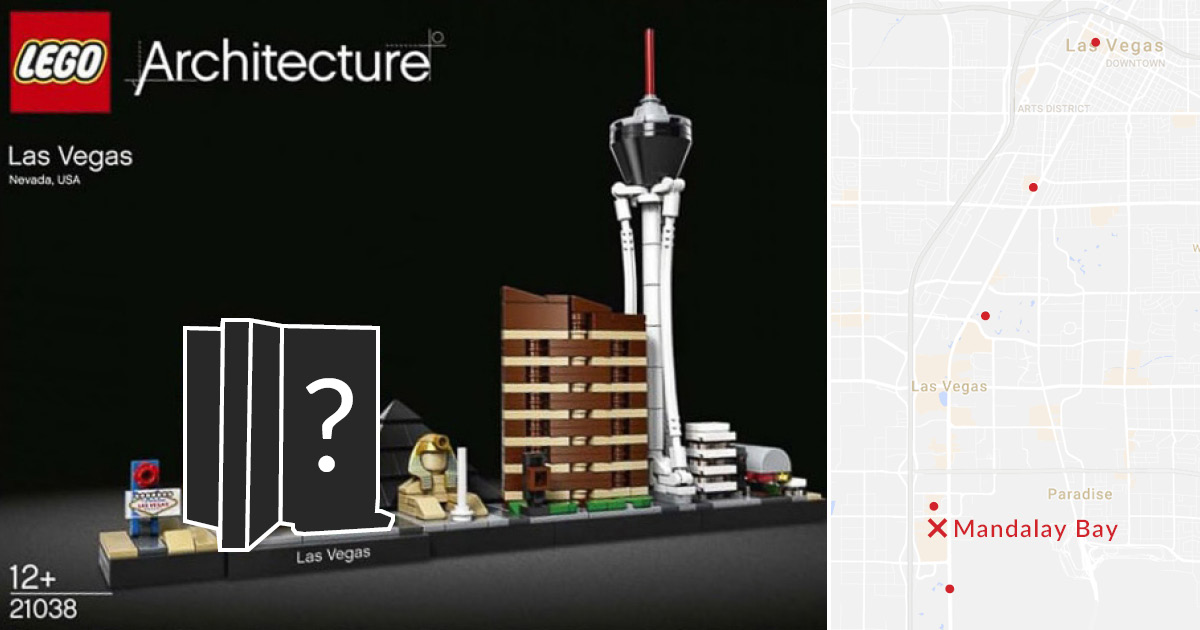 Update September 7, 2019: Brick Architect acquired one of only a few dozen copies of the original version of this set. Check out our in-depth review of #21038 Las Vegas Skyline.

Update August 11, 2018: An updated Las Vegas Skyline set was released with a new set number. Read our review of #21047 Las Vegas Skyline, and you will find out which Las Vegas landmark replaced Mandalay Bay in the final model!

The LEGO Group has a long history of avoiding polarizing subjects like Religion, Politics, or Adult Themes. They have been averse to including graphic violence, and guns have been restricted to themes set in the past or distant future.

Their aversion to more complex subjects is one of the reasons I had a hard time believing that Las Vegas would be released as a LEGO set when first rumored last year… The ‘Sin City’ is probably most famous as a destination for gambling and adult entertainment, with the catchphrase “What Happens in Vegas, stays in Vegas.” (That phrase was used by the tourism board starting in 2003.) Admittedly, the city has grown a lot in recent years to become a destination for trade shows or families with a wide range of fine dining, theatrical performances, and family-friendly entertainment.

NOTE: This article tackles adult topics pertaining to recent tragedies in Las Vegas, and the cities salacious history. This isn’t a common topic for a LEGO website; please use your best judgement before sharing this article with younger audiences. Unfortunately, Las Vegas was also the site of a horrific mass shooting during an outdoor concert at the Mandalay Bay Hotel on October 1, 2017. There were 59 fatalities and almost one thousand injured. (Suffice to say, this event sparked another wave of debates in the United States around gun rights, semiautomatic weapons, and mental health issues, but a LEGO blog is not the right place to be discussing such issues.) #21038 Las Vegas Skyline is being redesigned.

Not only did this tragedy put Las Vegas in the spotlight under upsetting circumstances, but the Mandalay Bay Hotel was one of just five buildings featured in the model. In fairness to The LEGO Group, they could not have anticipated this since the model was designed well before the mass shooting event took place. While there wasn’t an official announcement of the delay since the Las Vegas set had not been publicly announced yet, It was pretty clear that it wouldn’t be released in January when the press photos and promotional materials for the Shanghai set were released, but we heard nothing about the Las Vegas set. My best guess is that they wanted to wait and see how the political landscape responded to the Las Vegas shooting, with the options of delaying or cancelling the set.

On January 21, 2018, Promobricks shared this official press photo, and indicated that the set would be available at the end of January after all. The photo showed no obvious changes in the design from what was rumoured before the shooting took place, and the Mandalay Bay had not been removed or replaced. Just over a week later, we have learned that the set is being redesigned for a fall 2018 release. Promobricks learned that a last minute decision was made to remove Mandalay Bay from the model and replace it with a different building.

Considerations for the redesign

In addition to the high-profile mass shooting at the Mandalay Bay, we have also recently learned that there are allegations of misconduct by Wynn hotel owner Steve Wynn. This is part of a wave of revelations of similar misconduct by powerful men across many industries. Should the LEGO Group revisit the design for this model, they might or might not also replace the Wynn hotel. I suspect they will not remove the Wynn since these allegations were only raised a week ago, and I suspect that the LEGO Group has already nearly finished the redesign work. Let’s start by looking at a map of the Las Vegas Strip, to see where each of the buildings in real life. As you can see, the buildings are not actually all that close to one another—it’s a 6.5 mile drive from the Las Vegas Sign to the Fremont Street Experience in Old Vegas. That said, I’m also quick to point out that the buildings do appear in roughly a linear arrangement on a map, and they appear in the correct order in the model as well.

What also stands out is that there aren’t very many interesting buildings which you could add in the same position as the Mandalay Bay since it is one of the southernmost iconic hotels on the strip. As such, I think it is fair to assume that the redesigned model will be significantly different than the one which has been cancelled.

The following analysis is based on my experiences visiting Vegas a couple times:

All told, I think the MGM Grand is the most likely choice, but the Bellagio is probably more iconic. That said, they could surprise us by picking one of the classics instead. Either choice would require them to re-arrange the order of the buildings in the finished model. Almost all of the examples cited would go between Luxor and Wynn based on the existing model.

What do you think will replace Mandalay Bay in the revised model? Let me know by leaving a comment below!