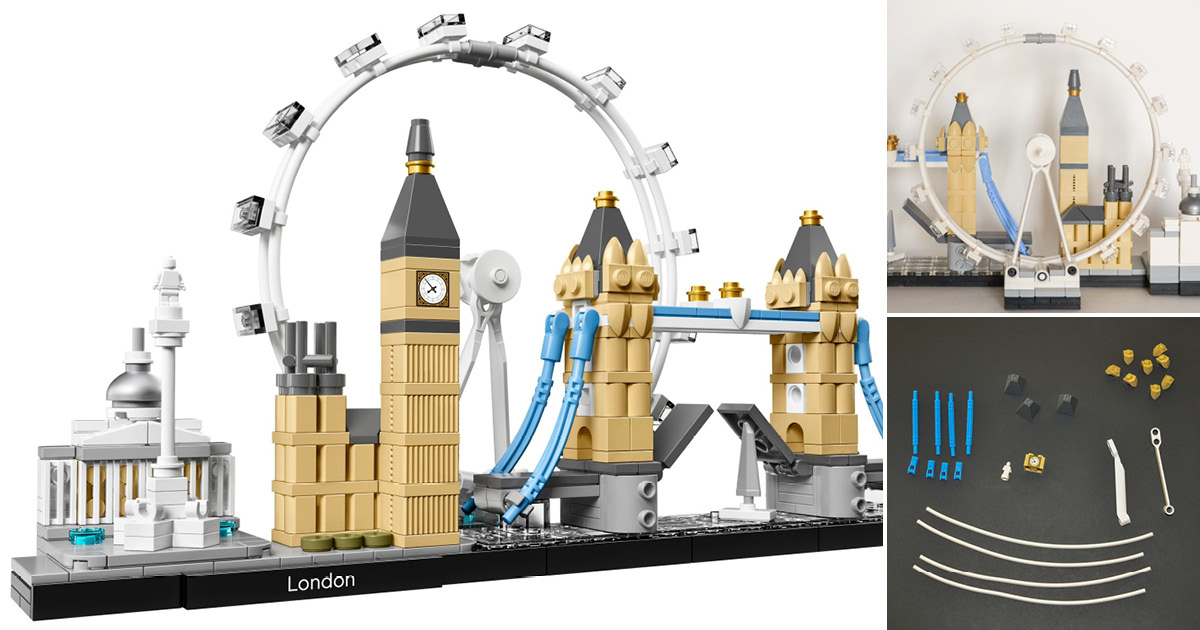 #21034 London is one of three LEGO Skylines released in 2017, featuring well known London landmarks like the Tower Bridge, Big Ben, and the London Eye. Let’s see how well the model captures these iconic buildings.

November 7, 2018: Brick Architect now includes numeric ratings. The original review did not have a rating, a few sentences were changed to add a rating for this set. —Tom Alphin As usual for the Architecture series, the box is nicer quality than most LEGO kits. The instructions seem to be almost the same paper quality as other LEGO sets, although they are bound instead of being stapled. The instructions include interesting facts that you learn while you build the model.

The model is about 10 studs side wide, and 36 studs long. The London Eye is the tallest section of the model at about 15 bricks high.

The model is built on a sturdy base which includes a space in the back to attach the London Eye.

In a previous article, Tom calculated the scale for the model to be about 1:900; that’s 900 times smaller than the real buildings.

This set contains 468 parts, plus a few extras. At a retail price of $39.99, it is less than .09 cents per piece. While most of the parts are small and common, I think that the few rarer parts makes this set a good value. Rare and interesting parts in this set.

My personal favorite parts include the clock printed on a 2×2 brick, the white flex tubes, and white statuette.

Buildings featured in the Model

There are five builds in the set, including the Tower Bridge, National Gallery, London Eye, Big Ben and Nelson’s Column. Let’s see how well each building was captured in the LEGO model…

This is a very decent micro scale version of the bridge. Since it was so small, they added color to show detail. I thought adding the medium blue to the top walkway, where they couldn’t add a fence was very beneficial to the overall appearance.

I think this was my least favorite build. It is very small and not the best representation of the building. Although the dome on top does make it recognizable, it just felt really small. Making it a bit larger would more accurately represent the shape of the building. This is a fun and eye catching part of the set, although it isn’t built to scale with the rest of the buildings. Putting it in the back helps make it appear father away. This makes it appear to scale even though it isn’t. (This technique of manipulating scale is called forced perspective.) It was a little hard to get all the capsules on right. They included a graph in the instructions to help you get them evenly spaced, which really helped. The wheel is held to the base with two Technic pieces, which allows it to move from side from side a bit. A guide in the book is required to space out the capsules evenly.

It is easy to tell if you don’t keep it completely straight because of the gray connectors on top. Since there is no way to rotate it, I wish they had a white piece to connect it. I don’t think there is a white Lego piece that would work, but it is disappointing that the connector stands out so much. The smallest build and really just 13 pieces. It looks fine for what it represents and the white statuette on top is a useful piece for micro building. This model includes five very recognizable landmarks from London, and they look great put together. I also appreciated that the back looks reasonable. The fun facts throughout the instructions, fairly rare pieces, and a decent price per parts ratio are also great. The colors for all of the buildings were well chosen, and I feel they reflect the actual buildings fairly accurately.

That said, the river bothers me a little. With transparent tiles on top of black plates, it doesn’t look like much of a river, just dirty water. I would have preferred if they used transparent blue tiles, or a different color plate underneath to make it appear more like water. However, adding the river is appropriate since three of the buildings are on the Thames River. The other negatives is the scale of the buildings compared to each other isn’t very accurate, and the gray connectors used on the London Eye.

This set is very appealing for anyone who enjoys London or it’s architecture. The model would also be a nice addition for anyone who enjoys learning about the architecture of different cities. Lastly, It’s also a good set for people who want some unique pieces, particularly in White or Medium Blue. For the reasons outlined in this review, the set earns our “Very Good” (3/5 star) rating.

If you want to remember your trip to London, or complete your collection of LEGO Architecture skylines, don’t forget to add #21034 London Skyline to your collection.