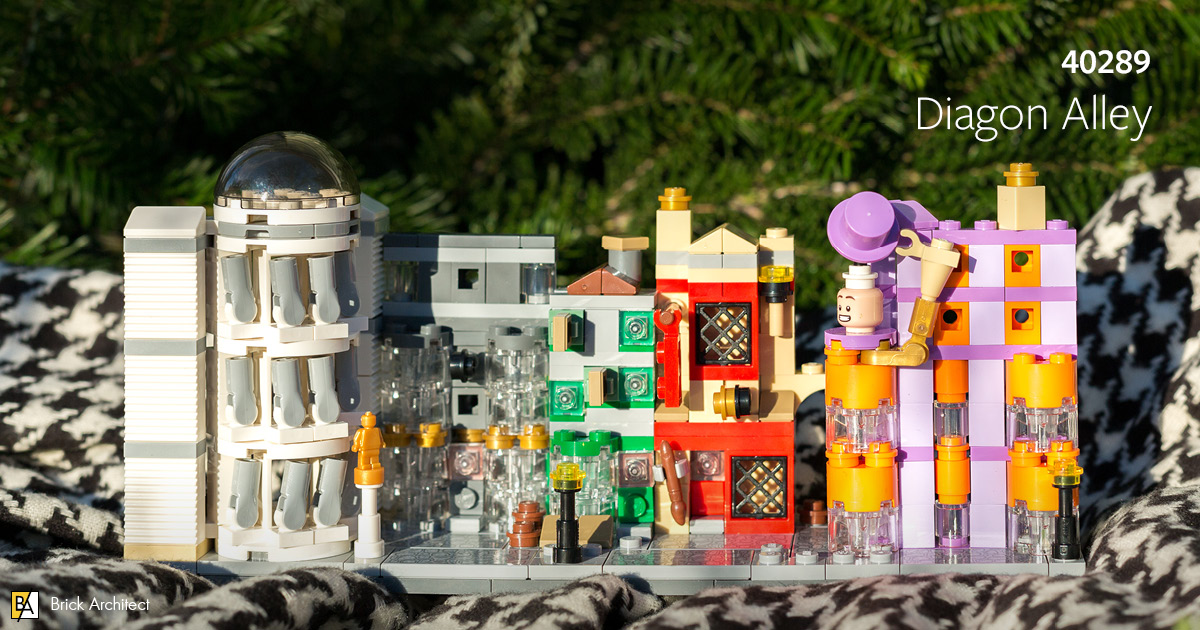 Other than Hogwarts Castle, what location in the Harry Potter universe is more iconic than Diagon Alley? Let’s see what 17 years of LEGO innovation can offer in this delightful microscale re-creation of Diagon Alley.

As a fan of the Harry Potter universe, the moment I learned that the product line was returning to coincinde with the release of the Fantastic Beasts films, I knew I had to get sets that I once missed. The intricately detailed film provide for a perfect opportunity for LEGO designers to tap into their creative palette and build some amzing new sets.

With the 6000 piece #71043 Hogwarts Castle recently hit the shelves as a direct to consumer set, there was no better way to compliment that fantastic looking set than to have a miniature version of Diagon Alley be released at the same scale. With this nano figure scale set being provided as a free gift it is no surprise that it was an immediate hit with fans of Harry Potter and LEGO. Having been fortunate enough to pick up this gift I am excited to share my impressions of this small yet quirky set.

Built at the same scale as #71043 Hogwarts Castle, This model of Diagon Alley is also in microscale. It features Gringotts Bank, Ollivanders Wand Shop, Flourish and Blotts, Quality Quidditch Supplies and Weasleys’ Wizard Wheezes. To top off this build, a minfigure of Mr. Ollivander is included in the set. Modeled after the buildings from the Harry Potter movie franchise (which you can now visit at the Wizard World of Harry Potter at Universal Orlando), this is a very accurate nanoscale model.

The first Diagon Alley set was released back in 2001, what feels like an eternity ago. Back in the days when LEGO still had yellow faced figures in the Harry Potter line, this set is a relic of the past and a prime comparison to show how far LEGO has come over the years. Coming with 80 pieces, a cardboard backdrop and a figure of Hermione Granger #4723 Diagon Alley was a very simplistic build with lots of playability and charm. Having been sold at 10$ (£8.99) you would be lucky to find this iconic set sealed in a box for any less than $100, showing the desirability and charm of Diagon Alley builds, especially when compared to other sets of this period. If we fast forward to 2011 we saw #10217 Diagon Alley, a direct to consumer minifigure scale model of Diagon Alley featuring Gringotts Bank, Borgin and Burke’s and Ollivanders Wand Shop. This set coming $149.99 (149.99 euro, 132.99 pounds) with 2025 pieces and 12 minifures made it a wonderful set for price per part, seemingly a trend in the Diagon Alley sets. The set was a hit with customers, and remains highly sought-after set to this day due in part to the exclusive figures released in that set.

Nearly half a decade later, with Fantastic Beasts: The crimes of Grindelwald hitting the theaters, there is no better time to revive the Harry Potter LEGO line, with the first wave of sets having been released in 2018 and more to come next. #40289 Diagon Alley is a much-welcomed set, whether or not you are a fan of Harry Potter universe.

I often expect free with purchase sets to be small, quick to assemble, rely on standard building techniques, and feature no unique parts. This set is very different. Even at first glance you will notice the many fine details and building techniques. LEGO has stepped up their game for this set!

Fans of Harry Potter will quickly identify each of the buildings. There’s a lot going on in this set, which is built using a plethora of building techniques, and lots of different colors—a magical (pun intended) sight to behold! The front of the box displays a detailed close-up of the set , while the back shows details explaining what each of the structures in this build represents. When you open the box, you will find that it is filled to the brim with LEGO parts and 72 pages of instructions.

Breaking the set down into two stages, the first focuses on building the minifigure along with the base of each of the structures, before building up the details and height of each building. Even after just building the base you can see some of the smaller details packed into this set, including a unique cobblestone printed 2×4 flat tile piece, that is exclusive to this set. These six tiles add a lot of atmosphere to the set, even when the structures are at such a small scale.

As we start to build the structures, we see that each building features a unique color palette and different building techniques. Most interesting is how Gringotts Bank is built to angle inwards towards the street. Using a turntable fixed into the ground we are able to get a cylindrical structure built, juxtaposing the other squarer structures. By the end of the first bag the buildings start to make shape, transporting us to the magical place Harry Potter first stepped foot in during his first wizarding year in Harry Potter and the Sorcerer’s Stone.

As we start to build up the second bag, the full details of the structures start to spring into light. We start to recognize each building directly from the way they were designed in the movies. From the bright orange and lavender from Weasleys’ Wizard Weazes, the crooked angled pillars of Gringotts Bank, to the green and red of the bookstore and Quidditch Supplies, all of it starts to take shape as the build comes to completion. It is very difficult to capture so many fine details at this small scale, but what was done with the limitations of available LEGO parts is astounding. Most recognizable, and stand out when looking at this build is the face of one of the Weasley twins tipping his hat above the entrance of the store. A very memorable scene from the later movies. Despite using mostly bricks, studs or modified studs, a variety of details adorn the façade of the buildings, with signage littering the walls. Smaller details that are easily missed also are meticulously placed around the build, ranging from a minifigure brush outside Quality Quidditch Supplies representing a broom stick, to a nano figure golden goblin statue standing on a plinth in front of the bank.

This set is a must have for fans of the Harry Potter franchise. Even for those who are not fans of the franchise, it is a great set for fans of LEGO due to the diverse building styles, the bright and varied colors, and fun build experience. It might be fun for all ages, but the lack of playability in this set makes it more appealing as a display piece for Adult Fans of LEGO.

Despite being a promotional gift and being a reasonably small set, this comes with a surprisingly large number of unique pieces. The immediate stand out is the custom printed cobblestone 2×4 plates in my eyes, which are surprisingly detailed. I am sure we will be seeing this piece in many sets in the future. A few of the parts unique to this set.

Despite being a nano scale set, just like with #71043 Hogwarts Castle, this comes with an exclusive minifigure making this already desirable set even more desirable. As is a trend with the last Diagon Alley set, the minifigure to be included in this set is Garrick Olivander, proprietor of Ollivanders in Diagon Alley, the store where many wizards and witches buy their wands. As with other Harry Potter minifigures, Ollivander comes with a set of 2 dark brown wands, fittingly giving you a spare for his store.

This minifigure comes almost entirely with exclusive parts, with the torso and the head being exclusive just to this set. This minifigure comes with a dual printed torso and head adding to the detail of this figure. Ollivander’s face print comes with two expressions, with the front of the head displaying a slight smile and the back displaying a concerned look on his face. His unique torso is printed on two sides, adding yet more detail to this figure, with the front displaying a brown over coat over a medium stone grey waist coat, adorning details such as a neck kerchief around his neck. The back of this torso, albeit having only minor print shows the back of the overcoat, giving a small bit of detail showing textures in the outfit being worn rather than being plain without print. Ollivander Minifigure is unique to this set.

I hope you were able to pick up this set while it was free-with-purchase, as it represents an amazing building experience. It far exceeds the stated $20 value, as is evident in the secondary market due to desirability and number of parts. With so many unique parts, a desirable minifigure and innovatively detailed buildings, this set is a must have for Harry Potter fans. Should you also be picking up #71043 Hogwarts Castle, then adding this set to your collection is a no brainer. With the variety, detail and overall wonderful building experience this set earns our top marks: “Must Have” (5/5 stars). It is without question a wonderful set for its price and size, and a wonderful display piece for any fan of Harry Potter or LEGO alike.

Average rating for this set from brickinsights.com #40289 Diagon Alley is a fantastic addition to any Harry Potter fans’ collection, but with great new parts in new colors and a fun and detailed build, this is a great set any fan of LEGO. The exclusive set is out of print, but you may be able to find it at Amazon.

Unless otherwise noted, photos in this article are by Koen Van Der Hoeven.