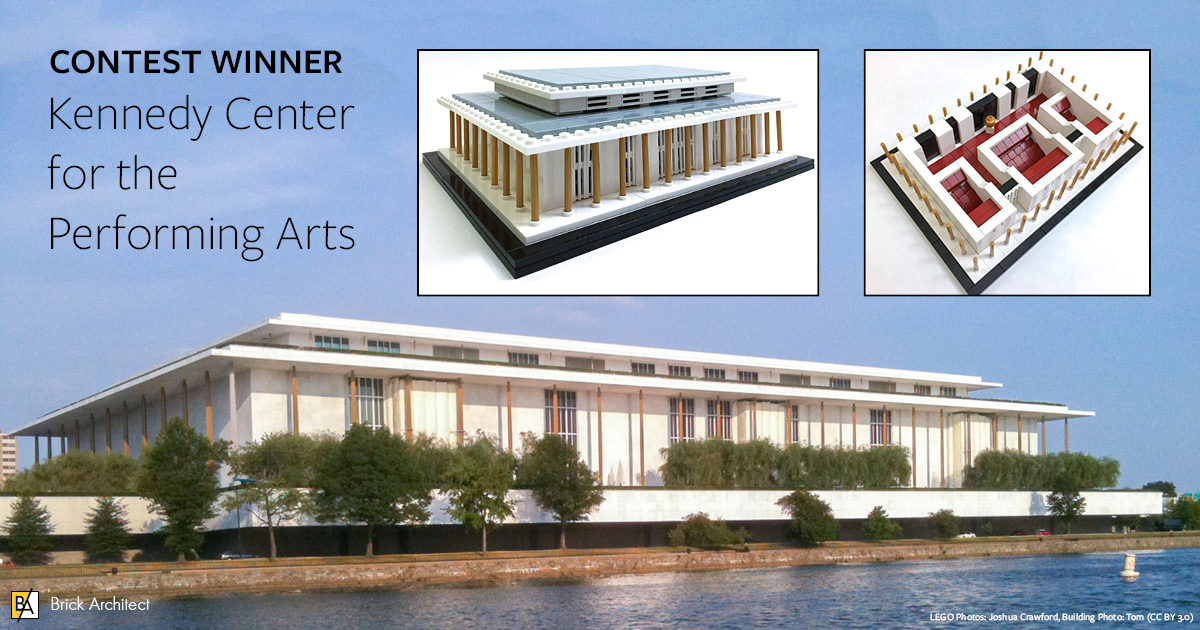 Brick Architect’s Hometown Landmark Contest brought in several great entries, and we have chosen a winner. Let’s take a closer look at the winning model!

Thanks to everyone who entered Brick Architect’s Hometown Landmark contest and built a replica of a local building. The Brick Architect writers have voted, and it was close, but we’re pleased to announce the winner.

Congratulations to Joshua Crawford, whose Kennedy Center for the Performing Arts is our winner! Joshua lives in Washington, DC. (In addition to the winning entry, he also submitted his MOC of the Jefferson Memorial.)

We especially loved all of the details Joshua packed into his microscale version of the building. If you remove the roof, you will see that all three of the building’s main theater spaces are represented. Seats are represented using 1x1x2/3 Slopes (Part 54200), and the curtains are made with 1×2 Bricks, Modified with Grille (Part 2877). Another nice detail is the use of Minifigure Head (Part 3626c) in Warm Gold (Pearl Gold), which is an excellent stand-in for the large bust of John F. Kennedy in the lobby. Joshua says, “…this build, along with other Washington DC MOCs, are a great way to use pieces from the Architecture Studio set, because those white pieces are great for all of DC’s Neoclassical (and otherwise largely white-colored) buildings.”

Coming in a close second in the voting was Lorren Loveless and his MOC of the Richland County Courthouse in Sidney, MT. We were impressed with Lorren’s attention to the building’s many architectural details, but we especially enjoyed all of the fun elements he added. See if you can find Batman, the hot dog vendor, a newly married couple, and the Gorilla Suit Guy who thinks he’s King Kong. Thanks again to all who entered Brick Architect’s first contest. Let us know what you think of the winner and runners-up, and watch for more contests in the future!

The LEGO Group provided the prize for this contest. Visit the About page for more info about our journalistic standards and affiliate programs.