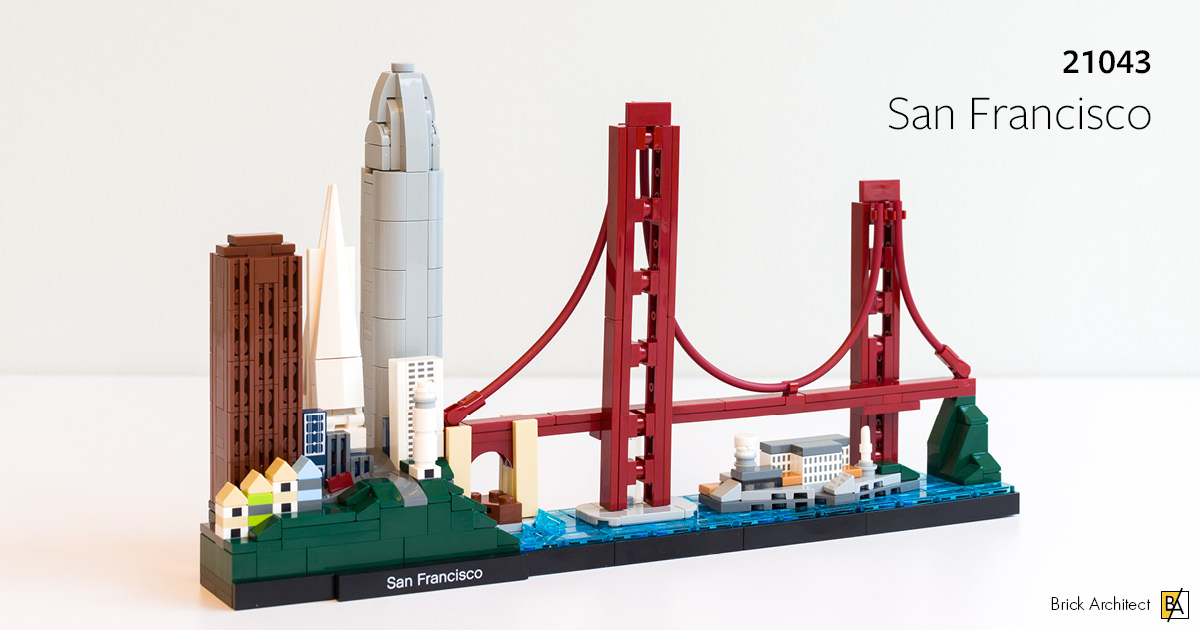 Can the LEGO Skyline series capture the spirit of the city best known for bridges and hills, rather than the buildings? Let’s find out!

Updated February 4, 2019: I updated the article to reflect a few details from LEGO Architecture designer Rok Žgalin Kobe (who we interviewed last summer). This includes a correction that the vehicles are actually cable cars, and wanted to make sure we noticed the waves beneath the bridge.

When I saw photos of #21043 San Francisco for the first time, it was clear that it will stand out from other sets in the skyline series. For one, it is the first set in the skyline series to feature prominent terrain features. With a significantly smaller tower on the right side of the Golden Gate Bridge, this is also the first model to use forced perspective to give an enhanced sense of depth. Other initial impressions before building the model included an appreciation for the clever parts usage to build the Transamerica Pyramid, ambivalence towards the Salesforce tower (which I am not familiar with since I haven’t visited the city in several years), and curiosity in the overall composition which pushes the buildings very close to one another. I didn’t expect it to be my favorite in the series, but was excited to build it and see if it could exceed my expectations.

#21043 San Francisco comes in the same premium flip-top box used for the rest of the Architecture series, with a bound softcover instruction booklet. #21043 San Francisco and #21044 Paris Skyline are the 9th and 10th additions to the Skyline series which debuted in 2016. Sets in the series seem to keep getting bigger—both of the 2019 sets are larger than most of the sets from previous years.

Upon opening the box, I was pleased to see that the box contains three numbered bags. (Most LEGO Architecture sets up to this point did not include numbered bags at all.) Numbered bags are hardly necessary in a set around 600 pieces, but they do reduce the time required to find each piece and allow you to build the set on a smaller table. The build process is broken into three bags.

As expected, the first bag begins by building the base of the model. This begins with a long row of brackets along the front, followed by blue and black plates forming the structure of the base.

The model includes a large section of water, which is re-created using a lot of trans-light-blue tiles. Most of the tiles are placed over Bright Blue plates, which really intensifies the blue color. Unfortunately, some of the tiles along the front are placed on top of black pieces instead of blue pieces. The black studs are clearly visible through the trans-light-blue tiles. This is unusually sloppy, for an official set, and could have easily been fixed using slightly different parts. (They could have used blue brackets to eliminate this unsightly effect, or used black plates beneath all of the water for a uniform effect.) While we don’t build any of the architectural features themselves, we do build some of the support infrastructure including part of the hill on the left, and the concrete platforms the bridge piers. We also see clever usage of clips, which various structural elements in the latter steps will be attached to.

It’s finally time to build the city! In this bag, we build all of the skyscrapers that appear on the left-hand side of the model. They are assembled from right-to-left: Salesforce Tower, Transamerica Pyramid, and 555 California Street. We also build a steep street with 140Earth BlueDark Blue and 154Dark Red cable cars on it, although they are mostly covered when the model is finished.

Unfortunately, the least pleasing building in the model is the tallest one. Built in 2017, Salesforce Tower is an uninspired phallus with rounded corners that tapers near the top to a rounded tip. Making matters worse, the LEGO re-creation doesn’t capture the buildings rounded form very effectively; the real building tapers more gradually than the LEGO model, and the top of the tower isn’t smooth enough to capture rounded shape of the real building. (I’m not saying that I could have done a better job, but rather that it isn’t an easy building to re-create in LEGO at this scale.) This LEGO model comes down to a cleverly used LEGO element: Tooth with Flexible Tip (part #61406). This is an effective facsimile of the real building using an economy of parts. I think this is the strongest of the three skyscrapers in the set. This is a passable reproduction of an underwhelming building. The buildings grooved exterior is simulated using a lot of 1×2 Grille Tiles (part 2412b) in 192Reddish Brown. In the third and final bag, we build Alcatraz Island, finish assembling the landscaping and smaller buildings on the left side of the model, and wrap up the project by building the Golden Gate Bridge.

I’m impressed with the microscale rendition of Alcatraz, which includes the main cellhouse, water tower, lighthouse, and outbuildings. The buildings in the model are larger than they appear in real life, but the overall composition is effective. I appreciated how many smaller details were included on the left-hand side of the model. The tiny Victorian homes working their way up the hill add a sense of scale and whimsy to the overall composition. (The brightly colored homes are sometimes referred to as the “Painted Ladies”.) At the top of the hill we have a microscale rendition of Coit Tower, which is adequately represented as a stack of 1×1 round bricks.

The most prominent structure on the front of the box is also the most satisfying part of the model to build. Artfully perched between two hills, the Golden Gate Bridge features a new technique for the LEGO Architecture series—Forced Perspective. When building a real suspension bridge, the towers and cables are built before the road surface.

What’s that? Forced Perspective is a technique whereby you create the illusion of depth through optical illusions such as making one section of the composition look further away by making it smaller. That’s why the rightmost tower of the bridge is smaller than the leftmost tower, to create an illusion of depth. I’m pleased to report that the illusion works remarkably well. The subtle detail where the suspension cables attach to the front on the left and the back on the right reinforces the effect.

Just below the left span of the bridge, you will see a tiny re-creation of Fort Point, which has guarded the Golden Gate for over 150 years. It’s built out of two 2×2 Cut Corner Plates (part 26601) in 192Reddish Brown. You will also notice tiny waves crashing against the sea wall.

The set contains 565 pieces with a likely retail price of $49.99. That would be just under $0.09/piece, which is pretty good, although the set features lots of relatively small parts. (I’d prefer to see architecture sets under 0.08$/piece since they are unlicensed sets, and they typically use a lot of small pieces.)

#21043 San Francisco includes three different printed elements, but only one is unique to this set. Printed parts are not calibrated consistently.

I need to mention that the print quality is not very consistent with these parts. Stacking bricks side-by-side reveals very inconsistent alignment of the printed patterns. This is fine in isolation, but extremely noticeable when placed side-by-side.

There are only a couple parts appearing in new colors for the first time in this set.

#21043 San Francisco has a wide range of highlights and lowlights, making it more difficult to summarize than most of the other sets in the series. On the one hand, we have a convincing suspension bridge that explores forced perspective to achieve a greater feeling of depth than past sets. We also have a lot of lovely smaller details including an intricate rendition of Alcatraz Island, an attractive house-lined hilly street, and an inspired but simple design for the Transamerica Pyramid.

Unfortunately, we also have some disappointments in this model, most notably the boring and poorly captured model of Salesforce Tower. The fact that it is a brand-new building that many people don’t yet associate with the city doesn’t help. I really do not like that the water appears patchy because it has a mix of black and blue plates beneath it. We also can’t forget that the model relies a bit too much on printed parts for my taste, and the printed parts weren’t printed very well. In my original draft of this review, I gave the set a “good” rating because the negative aspects of the build were noteworthy and they were fresh on my mind. Having spent more time with the finished model, and seeing the extremely positive way that other people are responding to the completed model, I have decided to give it a “Highly Recommended” (4/5 star) rating. I’m comfortable recommending the set despite its misgivings because it represents an innovative step forward for the Skyline series, and the completed model really stands out on the shelf.

While a fantastic re-creation of many of the city’s most iconic landmarks, #21043 San Francisco takes the series to new heights and depths, while ultimately missing the mark in a few places too.
The LEGO Group provided this set for the purposes of this review. The opinions in this article are strictly my own—providing sets for review does not guarantee a positive review. Photos in this article are by Tom Alphin unless otherwise noted. Visit the About page for more info about our journalistic standards and affiliate programs.