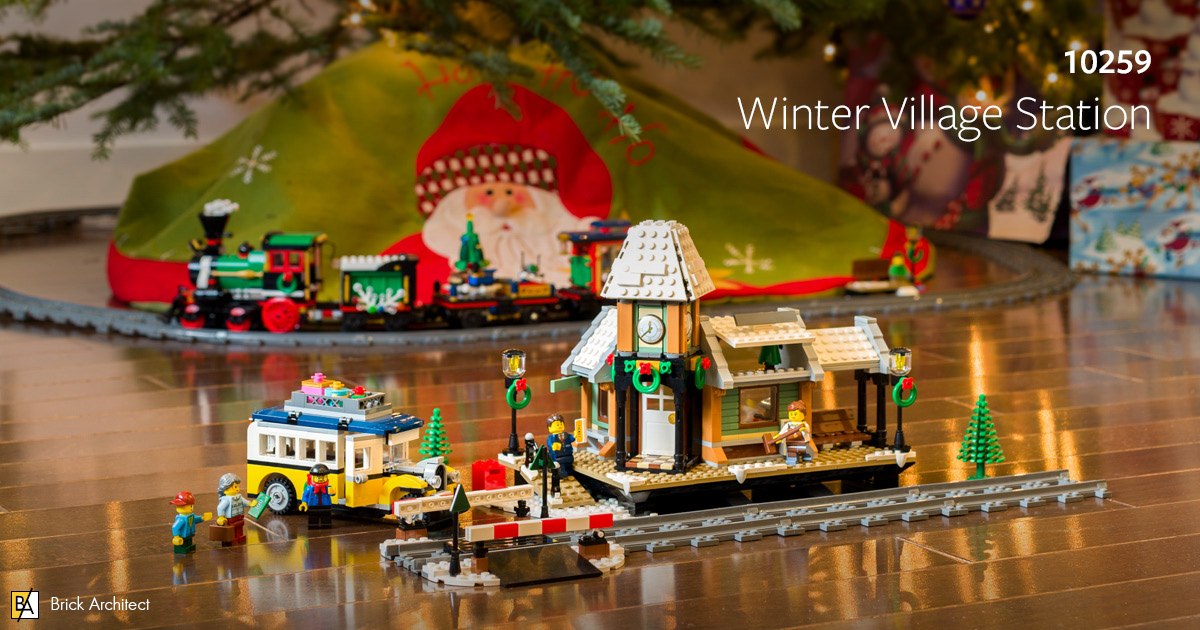 The Creator Expert Winter Village keeps growing! Now that it has a festive Winter Train, it needs a great Train Station. Let’s find out if this set is up to the task.

#10259 Winter Village Station adds a much needed train station to your growing Winter Village, but I couldn’t help but worry that the cute vintage yellow bus would steal the show. I am hopeful that the station itself has more to offer than we can see on the front of the box. #10259 Winter Village Station costs $79.99 (69.99€ / £74.99), and contains 902 pieces. The set includes 5 minifigures and three smaller models—Train Station, Railroad Crossing, and Vintage Yellow Bus. One of the advantages of sets containing multiple models is that you can share the building experience with your family.

After excluding the re-release of #10249 Winter Toy Shop in 2015, there are a total of 9 sets in the Winter Village series (including 2018’s #10263 Winter Village Fire Station which was released after this set.) Unfortunately, most of the sets in the series have already been discountinued.

Historically, each set has been available in stores for two consecutive holiday seasons, but #10254 Winter Holiday Train was available longer, presumably because it was selling well and fit nicely alongside this set. While both the Train and Train Station remain easy to find, it is unlikely that they will still be available next Christmas.

I always appreciate when a LEGO set over 500 pieces includes numbered bags. It makes finding parts less frustrating, and makes it possible to build the set on a much smaller table. While three bags would have been even better for a set of this size, we thankfully get at least two numbered bags.

By contrast, the vintage yellow bus is a nice build which employs come creative building techniques. The front end of the bus is especially nice, with well-shaped wheel wells, and a realistic old-timey front grille. Throw on some wreaths and you’ve got a good-looking ride into town for your winter vacation. The second bag contains parts for the entire building, although calling it “Bag 2” is a bit of a misnomer since there were 6 bags with the number 2 on them, comprising way more than half of the parts in the set.

The construction begins by assembling the base of the Train Station. The platform is raised 2 bricks and two plates off the ground, in order to line up nicely with the incoming train. This step is fast but not all that exciting. The most interesting part is when you leave a square shaped hole on the left side of the platform which is turned 45 degrees, and a 4×4 turntable base in the hole. That hole is for the entrance to the building which is turned from the rest of the model. Unlike most LEGO models with rotated sections, this does not use hinges at all. Instead, the central portion is built at the same time as the rest of the model, and they are carefully interleaved using plates which fit into the small notches present between two 1×1 round plates. This creates a tight fit and is a clever technique that I haven’t seen before. Round 1×1 Plates make it possible for the entrance to interlock with the rest of the structure.

As we complete the building, the tower continues to use the most interesting building techniques. It leverages a lot of half-stud offsets, gentle sculptural details using 2×2 round elements, clever use of a window element around the clock faces, and SNOT construction techniques near the top of the building.

The 902 piece set is $79.99 (69.99€ / £74.99). That’s a little under $0.09 cents per piece which is generally considered reasonable, but unlicensed sets and sets with lots of tiny pieces are usually cheaper than this. Fortunately, there are four pieces of train track and some relatively rare colors in this set, which might entice part collectors.

The color palette used on the Train Station is not pleasing to my eye, but it does leverage two less common and sought-after colors. Based on my earlier analysis 151Sand Green is what I determined is an ‘Uncommon’ color, and 312Medium NougatMedium Dark Flesh is ‘Rare’.

None of the 151Sand Green parts are especially rare. That said, 1×2 Masonry Brick (part 98283) is sure to please some part collectors, even though it is readily available for about $0.10 online.

We do however get two unique parts in 312Medium NougatMedium Dark Flesh in this set.

This set is a great complement to your Winter Village Train. The train station and railroad crossing will help you connect the train to the rest of your growing Winter Village layout. The set also includes a well-designed vintage yellow bus, which looks good and features some interesting building techniques. It is difficult for a relatively small set like this to include more than one major design element without sacrificing details in the main structure. The interior includes modest detailing at the ticket counter and barista stand, but both the interior and loading platform feel cramped—There isn’t enough space for a minifigure to actually walk around the front entrance to reach the loading platform!

While the railroad crossing adds a little atmosphere, and the vintage bus is well designed, the set would have been stronger if more of the attention was placed on the Train Station itself. For these reasons, the set earns our modest “Good” (3/5 star) rating. While it isn’t as good as I had hoped, it is still a nice addition to your Winter Village, and fans of the theme should get it soon before it’s gone.

While #10259 Winter Village Station isn’t a great standalone set, your Winter Village will benefit from a nice looking station, a simple railroad crossing, and a festive vintage bus.
The LEGO Group provided this set for the purposes of this review. The opinions in this article are strictly my own—providing sets for review does not guarantee a positive review. Photos in this article are by Tom Alphin unless otherwise noted. Visit the About page for more info about our journalistic standards and affiliate programs.

Subscribe to receive the latest Brick Architect Articles and Reviews in your inbox.