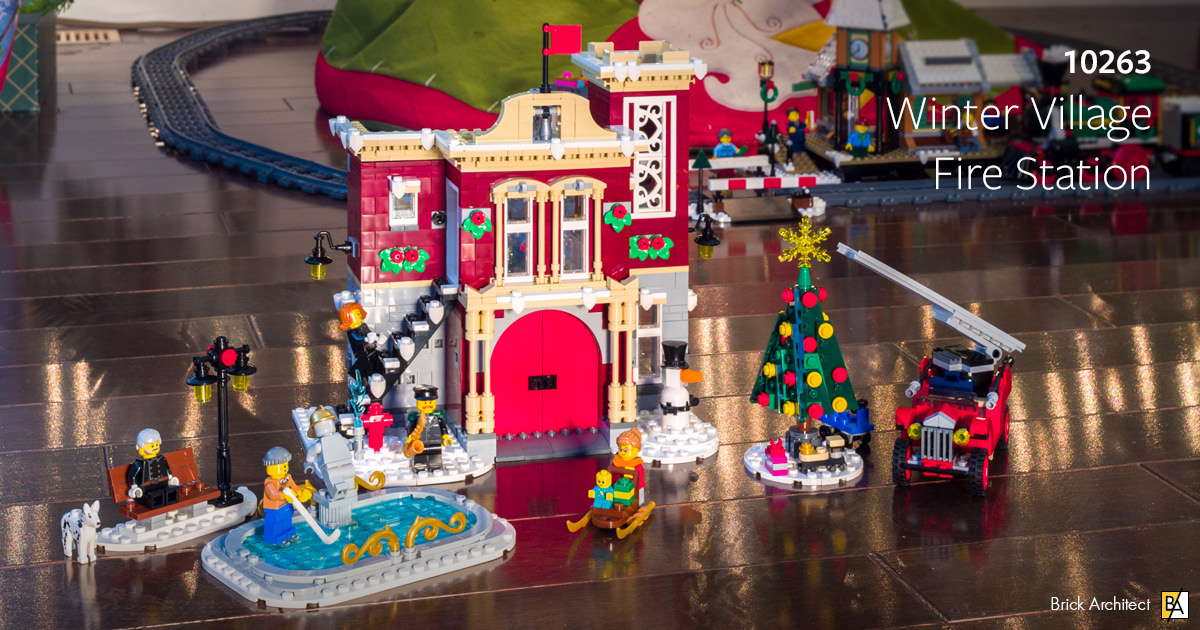 This year, residents of the growing Winter Village are a little safer thanks to a brand new Fire Station. Let’s find out if this set is hot enough to add to your collection.

The Winter Village keeps growing… a Toy Shop, Bakery, Market, Cottage, Santa’s Workshop and both a Winter Train and Train Station. Our little village has grown so quickly that it needs a Fire Station to keep everyone safe. Let’s take a closer look at #10263 Winter Village Fire Station.

As is common to sets in the theme, you don’t just build one main structure, but rather several ancillary models to help expand your winter village scene. In this case, we also get a tiny frozen fountain, Christmas tree, a bench with a lamp, and a ladder truck. You also get 6 minifigures, and one tiny baby on a sled.

My initial impressions are mixed on this set, as I like the truck, frozen fountain, and Christmas tree more than the building itself. My main concerns with the building are the overly regular snow patterning on the roof, an architectural style which doesn’t fit in very well with the rest of the Winter Village theme, and the curling art deco railing piece used for windows on the tower on the right hand side of the building. Let’s see if the finished model can exceed my mixed impressions.

The Creator Expert Winter Village was established in 2009 with the Winter Village Toy Shop. Since that set was re-released with minor changes in 2015, and there has been one set per year, this is the ninth unique design in the series. (I can’t wait to see what they have planned for next year’s 10th anniversary of the theme.) I always appreciate when a LEGO set over 500 pieces includes numbered bags. It makes finding parts less frustrating and makes it possible to build the set on a much smaller table. The use of three numbered bags is great, as it breaks up the fire station build by floor. The first bag comes with a separate smaller instruction booklet and is smaller than the other two bags. That’s because this bag includes all the ancillary structures which are placed around the Fire Station. This includes a bench, icy fountain, Christmas tree, and a ladder truck.

Each of these are fairly easy builds, which coupled with the decision to include a separate smaller instruction booklet leads me to believe they have designed this set on purpose to allow for collaborative building between a younger and older builder. While the set as a whole is rated ages 12+, I would guess that the first bag is feasible for ages 8+. (Maybe they should explore dual-age sets in the future?) Of the three models, the vintage ladder truck is the most satisfying with its curved red wheel wells and rotating ladder. The Christmas tree ended up looking better than I had expected, after seeing that it is built using four identical brick-built panels set at 90 ° angles from one another.

In the second bag, we build the first floor of the Fire Station. The build process has some nice details which were not obvious on the box cover, including a well designed garage door which mimics a wood door painted red, and an emergency call box on the right hand side of the building. Interior at the end of bag 2.

We also get some nice interior detailing, especially the area on the right hand side of the garage door which includes firefighting equipment such as a gold lacquered helmet.

In the third bag, we build the upper floor of the fire station. For whatever reason, the architect who designed the firehouse decided to shift from a stone exterior on the first floor, to a red brick for the second floor, while adding a mission-style accent and bell on the top, and a tower with ornamental windows. In Architectural terms, this building’s style would be described as “eclectic architecture”. While the exterior is a bit weird, it is well designed. I especially appreciated the clever use of clips to attach the two sections of the tower which are built using SNOT techniques. The third bag is also when we add the special Light Brick, which has a button on top that you can press to light up the second story interior. It’s not a bright light, but it’s sure to entertain younger builders. While the set contains only one existing part in a new color, it is a good source for 154Dark Red pieces; a popular color for building architectural models. The other prominent colors are 26Black, 194Medium Stone GreyLight Bluish Gray, 21Bright RedRed, and 5Brick YellowTan.

I am pleased to report that the Winter Village Fire Station slightly exceeded my expectations, just barely earning our “Highly Recommended” (4/5 star) rating. This is despite a building with an exterior design that is architecturally inconsistent and the overall form looks a bit weird from a distance. That said, the set really shines in the details, such as the emergency box on the building exterior, the well-designed compact kitchen upstairs, the red garage door, attractive exterior lamps, and the Crenellated Cornice details. For these reasons, it feels closer to the level of detail I expect for sets in the Modular Building Series. It stands out compared to other sets in the series—whether that is a good thing or not is up to you to decide.

Brick Architect recommends that you keep your Winter Villagers safe by building this Fire Station. If you agree, be sure to add #10263 Winter Village Fire Station to your collection before it is discontinued! Please consider using our referral links; it helps support the site!
The LEGO Group provided this set for the purposes of this review. The opinions in this article are strictly my own—providing sets for review does not guarantee a positive review. Photos in this article are by Tom Alphin unless otherwise noted. Visit the About page for more info about our journalistic standards and affiliate programs.