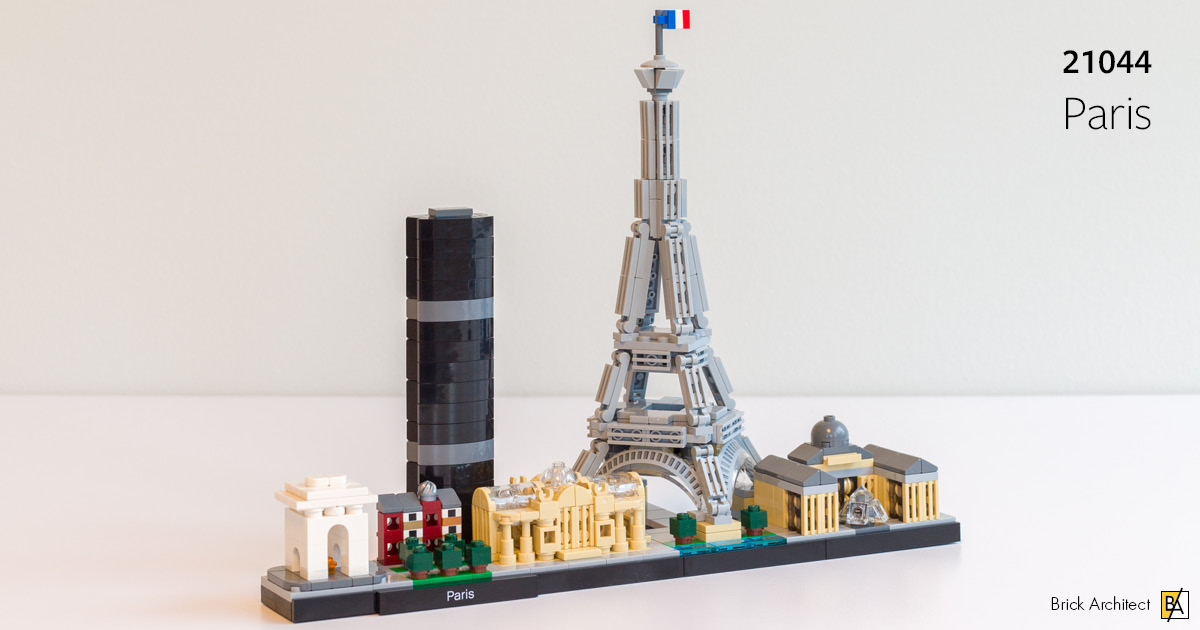 Does this cute microscale rendition of the City of Lights shine as brightly as the real thing? I hope so!

Paris is a vibrant city, best known for the iconic Eiffel Tower, but also for a rich culture of fine arts, delicious food, and beautiful low-rise architecture. The city has already been well represented in the LEGO Architecture Landmarks series in #21024 Louvre, #21036 Arc de Triomphe, and #21019 Eiffel Tower—all of which are captured in the new Paris skyline set. My first impression of the new Skyline set was positive. I was immediately impressed with this smaller re-interpretation of the Eiffel Tower, which remains faithful to the landmarks gracefully curving form despite the small size.

My eye then jumped to the immediately recognizable microscale Arc de Triomphe on the left, and the tiny re-creation of the Louvre on the far right. The rest of the model required a bit more effort to recognize: with a tiny rendition of Avenue des Champs Elysées, the infamous Tour Montparnasse skyscraper, and the Grand Palais.

While the overall composition is less dynamic than #21043 San Francisco (the other new 2019 skyline set, see review), my initial impressions compare favorably to other sets in the series because the microscale models look good.

The set comes in the same premium flip-top box used for the rest of the Architecture series, with a bound softcover instruction booklet. #21043 San Francisco and #21044 Paris are the 9th and 10th additions to the Skyline series (which debuted in 2016). Sets in the series seem to keep getting bigger—both of the 2019 sets are larger than most of the sets from previous years. The build process is broken into two bags.

In the first bag, we start by building the base of the model. Fans of the Skyline series will notice that the base is weirdly shaped with many protrusions in the back. Judging from the front cover and the position of the four 2×2 gray plates, this is clearly needed to accommodate the Eiffel Tower.

The first structure we assemble is the Grand Palais des Champs-Élysées, a massive exhibition site and museum which was built for the Universal Exposition of 1900. The curvy Beaux Arts style building has an iron, steel, and glass vaulted roof which allows light to fill the interior. This is tastefully re-created in the LEGO model using trans-clear 2×2 round bricks. The buildings curvy Beaux-arts style exterior is artfully captured using a selection of round elements. I do want to call out a few caveats: The model is fragile due to a lot of one stud connections. I wish the Sand Green arch above the main entrance was captured in the finished model. Lastly, the left and right end of the building isn’t particularly accurate to the real building which terminates with a curved roof, instead of an arched roof.

Next, we build a tiny representation of the famous tree-lined avenue which connects the Arc de Triomphe with the rest of the city. The real avenue is many blocks long, so we only get a taste with this charming selection of brightly colored buildings and the tree-lined avenue. Too bad they weren’t able to include some tiny cyclists racing to win the Tour de France at this scale!

Famous for inspiring the city of Paris to outlaw buildings taller than 8 stories in the city center, Tour Montparnasse is an uninspired black tower in the middle of an otherwise beautiful city. The building has two gently curved sections that meet with a narrow v-shaped wall. This is effectively re-created using a stack of 1×4 double bow elements, joined using a column of cheese slopes. The subtle stripes in the building are caricatured in the LEGO model using Dark Gray. The LEGO model is well designed, and thankfully placed in the background so we can focus our attention on the more architecturally interesting models. With the base and supporting buildings already complete, we can focus our attention on the three most iconic buildings featured in the model.

This LEGO rendition the Louvre is more expansive in scope than the dedicated LEGO set which only shows one of the three wings surrounding the Pyramid. This version is very small, but you can clearly see that the museum actually surrounds the pyramid on three sides. That said, a more accurate rendition would have seven towers instead of just one, and the towers would have a mansard roof instead of using a dark gray dome. I’m not going to lie, but this model is pretty dissapointing. The real building is rectangular, with a larger arch on the long side and two smaller and lower arches on the sides. This version is square, with the same part (1×3 Arch) used on both the front and the sides. Using a 1×4 on the front would have been a much more effective and realistic choice. I do like the roof detailing, though. This version of the Eiffel Tower gets the building’s curvaceous shape and overall proportions almost exactly right, but it loses some of the building’s elegance since the supports are too thick. I also deeply dislike the choice to use a printed clear brick to re-create the arches at the bottom of each leg. The LEGO Architecture series has always been rooted in the creative use of classic system elements, and having a clear part that isn’t meant to mimic glass feels disingenuous. (Why they didn’t use a short section of flex tube is beyond me.)

The set contains 694 pieces with a price of $49.99. That’s right around $0.07/piece, which is really good even though the set features lots of relatively small parts. (I believe architecture sets should be well under 0.08$/piece since they are unlicensed sets, and typically use a lot of small pieces.)

The set includes two different printed elements, but only one is unique to this set. The base of the Eiffel Tower relies heavily on printed parts.

While this set reflects a set of fairly safe choices based on the history of the LEGO Architecture Skylines series, I feel like they missed the mark in a couple key areas. The worst offense is the square Arc de Triomphe, especially since it could have been fixed so easily. Even though this version of the Eiffel Tower expertly captures the shape of the building, it is too chunky and relies on disingenuous printed parts to achieve the curved supports on the base. It’s too bad that the two most iconic landmarks of Paris weren’t quite right, as the rest of the buildings in the model are quite satisfactory. Given this mix of highlights and lowlights, I’m left wanting to give this a stronger recommendation, but ultimately giving it a “Good” (3/5 star) rating. It contains some clever building techniques, a wide variety of interesting parts, and the finished model looks good. It also represents a great value at nearly $0.07 per piece.

#21044 Paris won’t dissapoint fans of the Architecture series, or tourists who want to revisit past trips to the city, but I’m left wishing it was a little better.
The LEGO Group provided this set for the purposes of this review. The opinions in this article are strictly my own—providing sets for review does not guarantee a positive review. Photos in this article are by Tom Alphin unless otherwise noted. Visit the About page for more info about our journalistic standards and affiliate programs.