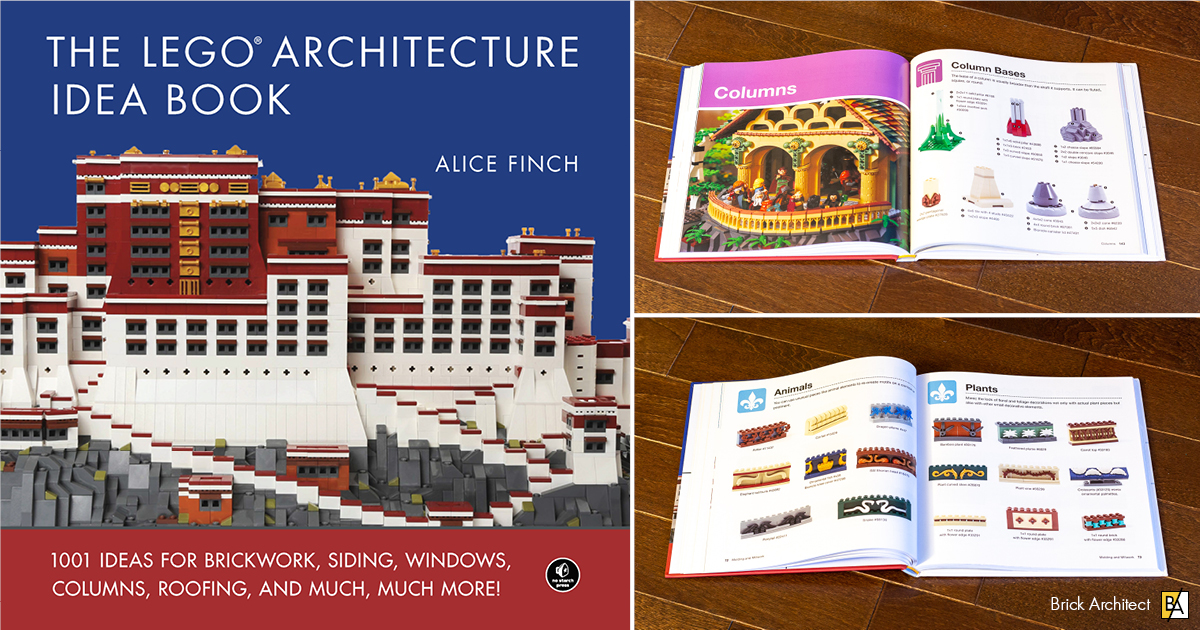 Alice Finch is probably best known within the AFOL community for her 400,000 piece Hogwarts MOC, which won Best in Show and People’s Choice at BrickCon in 2012. She was a featured builder in A LEGO Brickumentary, and is a LEGO Serious Play certified facilitator. She has traveled around the world giving talks and demonstrations on building with LEGO. Alice contributed to several previous books about LEGO, and co-wrote 365 Things to Do with LEGO Bricks. The cover of The LEGO Architecture Idea Book features Alice’s 2012 model of The Potala Palace in Tibet. The build is intricate and beautiful, capturing the details that make the Dalai Lama’s former residence such a striking building. This cover, however, may lead you to believe that the book is filled with huge builds that showcase the various architectural techniques. Instead, what you get is a mind-boggling number of small, brick-built sketches, each depicting a different technique. The subtitle claims 1,001 ideas. While I didn’t count each entry, I’d have to estimate you’re getting at least double that. The book is divided into sixteen major sections such as Curved Walls, Simple Windows, and Domed Roofs and Spires. Each of these sections contain several subsections, exploring many different ways to re-create that architectural feature using LEGO. Need twenty-three different designs for pediments? Alice has you covered. (Need to know what a pediment is? She’ll tell you that too!)

The Table of Contents gives you a sense of the wide range of architectural elements which Alice explores in this book.

Flipping through the book’s 200+ pages, you’ll quickly realize that there’s seemingly no LEGO element that Alice can’t turn into window, roof, wall, or decorative element. From Minifigure Legs (Part 970c00) and Crutches (Part 24077), to Hero Factory Handcuffs (Part 98562) and Carrot Tops (Part 33183), she uses them all. Duplo food elements are even called in to serve as domed roofs.

Learn how to use unexpected elements to create intricate architectural details.

Since it’s easy to see how the majority of the builds were constructed, they are show completed, rather than with the step-by-step instructions LEGO builders are used to. Particularly complicated constructions, like curved towers and shingled walls, are shown fully built, and also shown partially assembled with each different kind of brick color coded. This makes it easy to see how everything comes together.

In the more complicated builds, all elements shown and referenced are identified by name and by part number; otherwise, the key elements of each build are identified. For some printed pieces (mostly windows), the number of the set it came from is also included. Nearly all of the pieces used in the book are official LEGO parts, though Alice does use some custom pieces or LEGO pieces with custom printing. Those are all identified by name, and the company that created the piece is listed as well. A corrugated roof design might finally use up your excess supply of Technic pins.

After looking through The LEGO Architecture Idea Book, you may be tempted to think that Alice Finch has thought of every possible way to combine LEGO pieces into architectural elements, but remember: six simple 2×4 bricks can be combined in over 915 million ways. Ms. Finch’s hard work in the pages of the incredible book will serve as inspiration and jumping-off points for builders everywhere.

The LEGO Architecture Idea Book is perfect for experienced builders looking to add new details to their buildings, as well as for those searching for ways to recreate particular architectural details. It’s also just a great book to flip through for inspiration in general, even if you’re not working on a building. That being said, many of the ideas use rare pieces, making those builds possible only for those with extensive and diverse LEGO collections, which limits the audience somewhat. For these many positive traits (and one slight negative), The LEGO Architecture Idea Book earns the Brick Architect’s ‘Highly Recommended’ (4/5 stars) rating. If you want to add The LEGO Architecture Idea Book to your collection, the 222 page book has a retail price of $24.95, but you can probably get it for less at Amazon.com.

The LEGO Architecture Idea Book is well worth picking up, and will be a great addition to many AFOL’s reference and inspiration shelf.

Penguin Random House provided the copy of the book that I reviewed. The opinions in this article are strictly my own—providing books for review does not guarantee a positive review. Images in this article by Alice Finch / No Starch Press unless otherwise noted. Visit the About page for more info about our journalistic standards and affiliate programs.