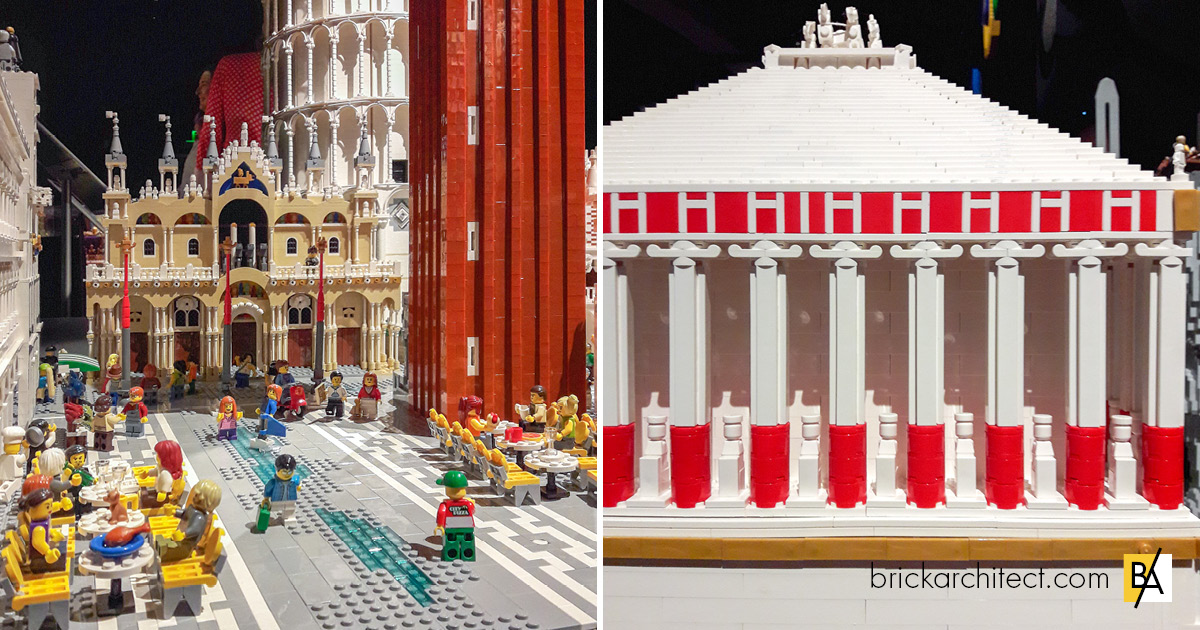 Review: ‘Wonders of the World’ exhibition by The Brickman

What’s more inspiring than a huge exhibit featuring two million LEGO bricks? Let’s join our newest contributor Christine for a tour of “Wonders of the World”, the latest show from LEGO Certified Professional Ryan McNaught (aka The Brickman).

Wonders of the World premiered in 2016 in Brisbane, Australia. After touring main centres in the Brickman’s homeland, it has landed in New Zealand. Christine attended Brickman®: Wonders of the World at the Auckland War Memorial Museum, and shares highlights from the show. We’ll also explore a a broader question about what we can learn from large-scale models at events like this.

The exhibit has 50 models constructed by a team of six LEGO artists using two million LEGO bricks which took a total of 4,944 hours to construct.

In addition to the many models on display, the exhibit contains interactive areas which encourage visitors to create something inspired by a specific models on display such as pyramids, towers, vehicles, statutes, and fish. (In case you are wondering, the fish are for the Great Barrier Reef which is one of the natural wonders of the world.) The Brickman often includes this sort of interactive component to provide events which engage and involve the visitors.

The exhibit features a range of wonders from ancient to natural, modern and industrial. Rather than an in-depth look at all of the models featured in the show, we will focus on three of my favorites.

This is an amazing model of the famous cathedral in Red Square in Moscow, Russia. It was designed and built by Mark Curnow in 720 hours using 71,689 pieces. As Mark shares in his notes, he quickly discovered that there is little repetition in the towers and domes of this highly decorated building. This made for a difficult and challenging build. There are some really creative uses of LEGO parts; I really love seeing all of these intricate details. It shows too how a building can be very cohesive through style and colour even though its form is very disorganized.

The model of the Arc de Triomphe in Paris, France was built by Ryan McNaught and Centuri Chan. It took 170 hours and contains 30,000 pieces. The overall shape of the Arc de Triomphe is relatively simple building, but that doesn’t make it easy to construct with LEGO. The form of the arch did pose its designers with some challenges, although they have beautifully resolved those issues. They even captured details of the inside of the arch in keeping with the real monument. Relief sculptures on the Arc de Triomphe in Paris, France, model designed and built by Ryan McNaught and Centuri Chan.

I was excited to share the intricate design for the relief sculptures. This is not something commonly done with LEGO, as it is hard to re-create these details in small models. Because of the model’s large size, these details are possible. In addition to being well designed, they also include a touch of humour and artistic license.

Mitchell Kruik designed and built the model of the Mausoleum of Halicarnassus. It took 65 hours and has 13,312 pieces.

This model represents one of the long lost wonders of the ancient world. It was built around 350BC and stood for over 1,500 years. The mausoleum was exactly square with lots of geometric details including the stepped pyramid roof. Since most details about the design and appearance of the building have been lost to time, the designer combined the best ideas of what the mausoleum might have looked like while matching known specifications of the building’s form. I appreciated the additional skills which goes into a model such as this, where there is no definitive record to copy, and research and reconstruction skills must be employed. This model stood out from the surrounding ancient wonders due to its bold, white colour scheme and red accents. There is also a nice juxtaposition of the large clean walls at the lower levels with the stepped pyramid roof made from many layers of jumpers.

The landscaping surrounding the mausoleum also look great – given what I say below about showing buildings in everyday use, I liked the fact that this model shows a small crew using a scaffold to work on one of the statutes. It is recorded that each side of the mausoleum was decorated by a different Greek sculptor. The artistry of these sculptures was reported on for hundreds of years afterwards. The mausoleum looks like the perfect canvas for such sculpture given its imposing but simple appearance.

Other models in the exhibit

With 50 models on display, we can’t talk about them all here. That said, I did take a look at the places featured in the LEGO Architecture Series to compare how many of these were also in the Wonders of the World exhibit. Big Ben is featured in the show, as well as these three official LEGO sets.

I was surprised to see relatively little overlap, although we did see:

Seeing how LEGO artists design and build large-scale models with the LEGO brick palette is very inspiring, but often it does not convert well to the scale that you are used to building at home. I appreciated the creativity of these models, but feel that there are relatively few direct lessons to be taken home due to the vast difference between which bricks work at which scales. Large-scale models often show incredible detail, but these simply can’t be replicated at home without creating serious scale distortions.

I have therefore focused on some broader inspirations of concepts which can add interest and enjoyment to your builds.

Showing Buildings in Everyday Use

All too often we construct models of the “perfect” version of buildings based on how they appeared on opening day when all the best photographs and publicity shots are taken. Yet what often connects us with great architecture is the feelings and memories which come from experiencing the building in its everyday use.

At Wonders, I found there was a natural connection and layered response to those models which portrayed places that I have actually visited in person. I found a few of the models to be particularly evocative, and I wanted to better understand what was unique about these models that gave me a visceral connection to the places being captured.

One example was the model of St Mark’s Square (Venice) which shows flooding in the square. For those that don’t know, Venice is sinking and St Mark’s Square in particular can resemble a lake pretty regularly. Seeing those translucent blue tiles atop the grey plates on the piazza immediately spoke to me. I remembered being piggy-backed across the knee-deep waters of the piazza coming back from dinner one warm spring evening. It is finishing touches such as this which can really elevate a model. And all because little glimpses of what it is like to actually experience a place in everyday conditions were included.

So please consider adding in some small touches which get to the heart of experiencing a place rather than sticking to the purity of the building’s blueprint.

I loved the towering model of a partially completed building at Wonders. I assumed it showed the finished product on one side and an earlier stage of construction around the back. I really liked this as a concept for a model. Several other models in the exhibit featured “inside/outside” viewpoints of a building or machine, and this seemed like a similar approach of taking the viewer on an informative journey. I wasn’t familiar with the building and it wasn’t until reading Ryan’s design notes that I understood what the model was actually showing. This building is in North Korea and was begun in 1987 and is still incomplete 30 years later. It exists in real life as it is shown here i.e. complete on one side, for appearances sake, whilst incomplete and derelict around the back.

Despite the political commentary embedded in this particular example, I liked how they captured two different time periods in a single model (one side is complete while the other is under construction). This works particularly well for those buildings which have interesting stories relating to their engineering or construction.

Often when we look for our next project, we are focused on individual buildings or particular cities. It is a great idea to take something like a list of Wonders of the World and use that as inspiration for a series of projects. If you choose a list which suits your own interests you can have a run of good builds without having to do too much research and decision-making around project selection.

Here in New Zealand we don’t get many chances to visit exhibits such as Wonders of the World. You may have the chance to visit these large-scale model shows more often. If so, appreciate the awe and detail of these models, but also try exploring some of the broader inspirations that you can try at home after visiting a large-scale model show.

Unless otherwise noted, photos in this article by Christine Coste.