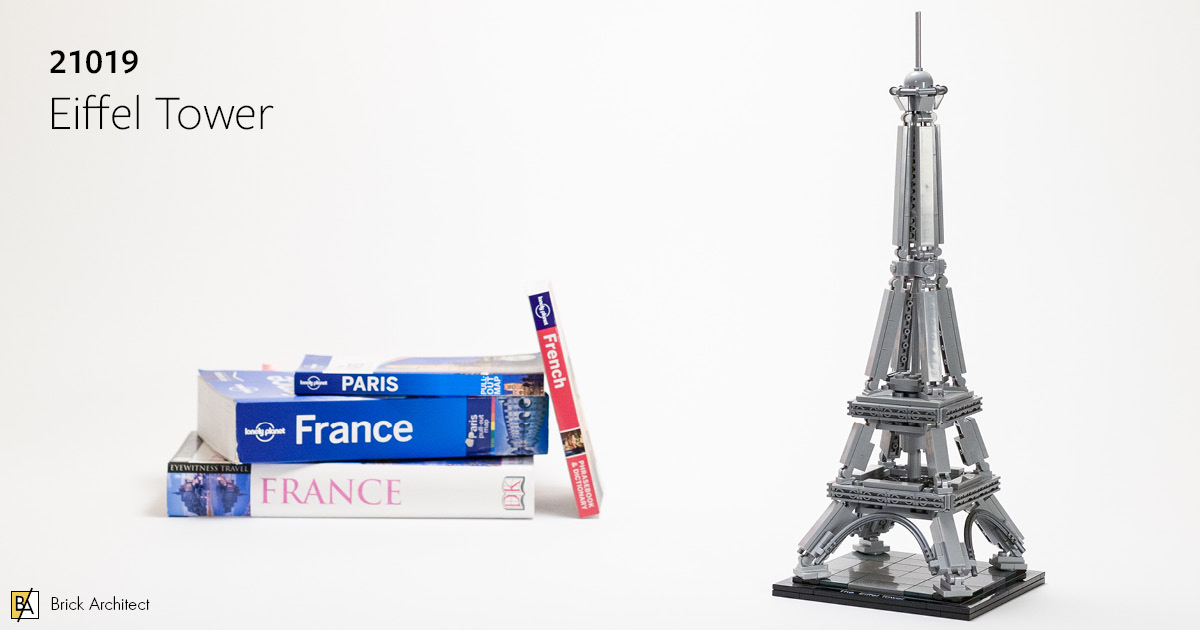 Paris is a classic destination for summer holidays. Let’s look back at recently retired LEGO Architecture set #21019 Eiffel Tower to see if it’s worth adding to your collection.

This is the second of several reviews looking at retired LEGO Architecture sets. It’s in our shorter review format that focuses on the most important details. 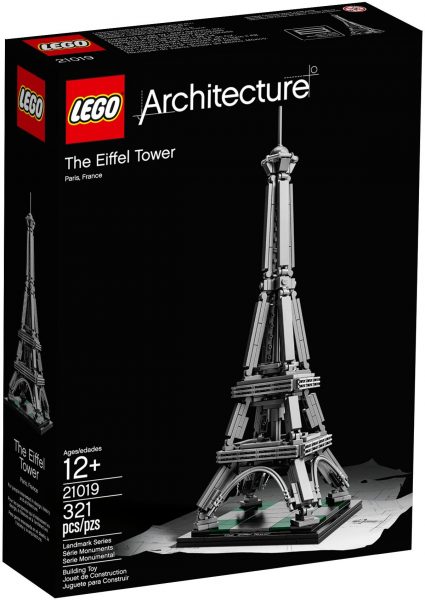 Like all Architecture sets, you begin building #21019 Eiffel Tower with the base, however it’s not long before something is different. In each corner of the 14×14 base is a 2×2 Turntable Plate (parts 3679 & 3680). While building with LEGO usually consists of placing elements at right angles, these turntables hint at the diagonal placement of several pieces all the way up this iconic Parisian landmark. 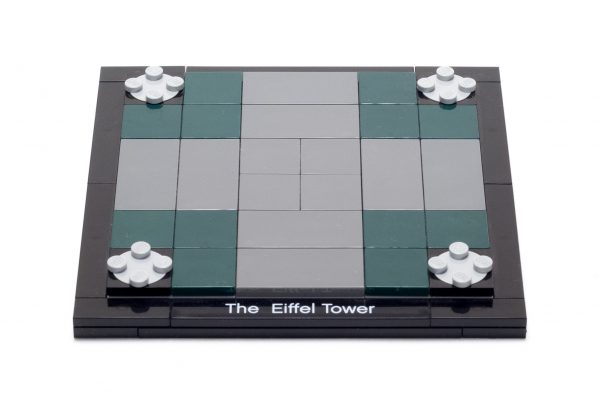 2×2 Turntables on the base allow the model to be assembled at a 45° angle. (Photo: Tom Alphin)

The tower itself is built in two parts, and soon after starting the first part, 1 1×1 Plate with Horizontal Clip (part 61252) is placed diagonally pointing outwards from each corner of a 6×6 Plate (part 3958). The first of two horizontal platforms is topped off with an 8×8 Plate with Grille (part 4151b), a piece that seems tailor made for this purpose. A central Technic column begins between the two platforms and helps to stabilize the model. Though there’s no such pillar in the actual Eiffel Tower, the model designer can easily be forgiven for adding this small bit of support. 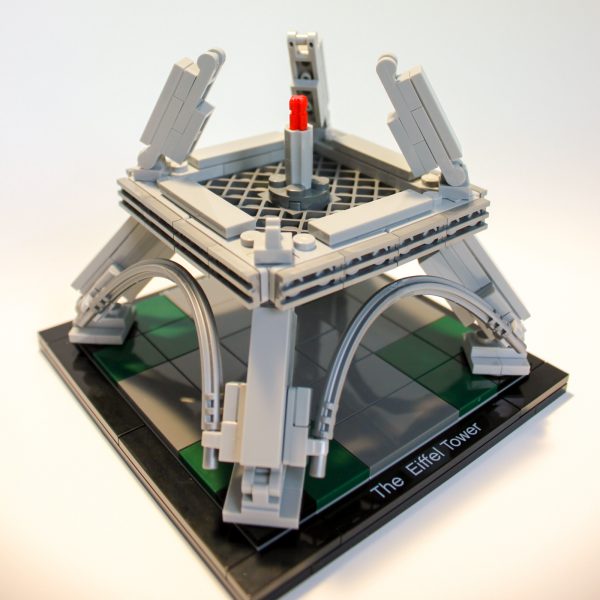 The sides of each of platform are decorated with Silver Metallic 1×2 Tiles with Grille (part 2412b), giving the model a texture similar to original’s ironwork lattice. After placing the bottom half of the tower onto the base, one 12L Hose, Soft Axle (part 32200) is clipped into place on each side, between the structure’s legs, forcing the hose into a perfect curve. 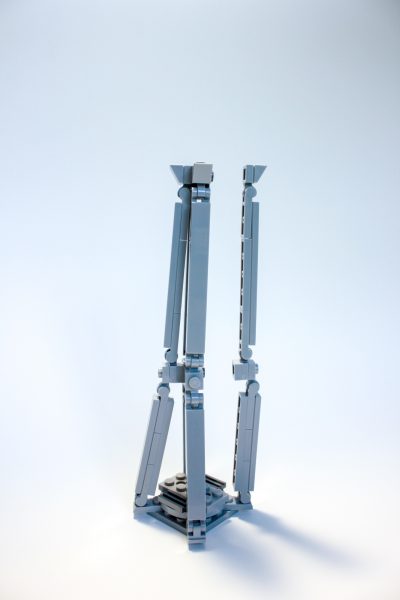 The final section of the tower consists of eight struts connected to each other via 1×2 Plates with Handle on End (part 60478), 1×1 Plates with Horizontal Clip (part 61252), 1×1 Bricks with Studs on 4 Sides (part 4733), and tiles of varying lengths. A few simple parts create the observation deck and antenna (more on those in a moment), et voila, c’est finis!.

Like most of the recent sets in the Architecture series, the set features creative parts usage and several noteworthy techniques.

A few of my favorite techniques featured in this model:

Other than the two 1×8 Tiles with “The Eiffel Tower” printed on them – one in English, one in French – the only element that has appeared in a small number of sets is 12L Hose, Soft Axle (part 32200) in Silver Metallic, which is only available here and in #41346 Friendship box. Obviously, if you’re parting out this set, you’ll be getting mostly 194Medium Stone GreyLight Bluish Gray pieces.

The Eiffel Tower has such a classic silhouette, and is the kind of landmark that lends itself so well to recreation in LEGO form. If there’s one less-than-perfect aspect to this model, it’s that the smooth tiles that make up most of the outward facing structure don’t capture the latticework that is such an iconic element of the original. LEGO’s earlier Eiffel Tower set (#10181), which was released in 2007, does a better job of this, but that set was 42.5 inches (108 cm) tall and had 3428 pieces. At fewer than one-tenth the number of pieces, #21019 does just fine. 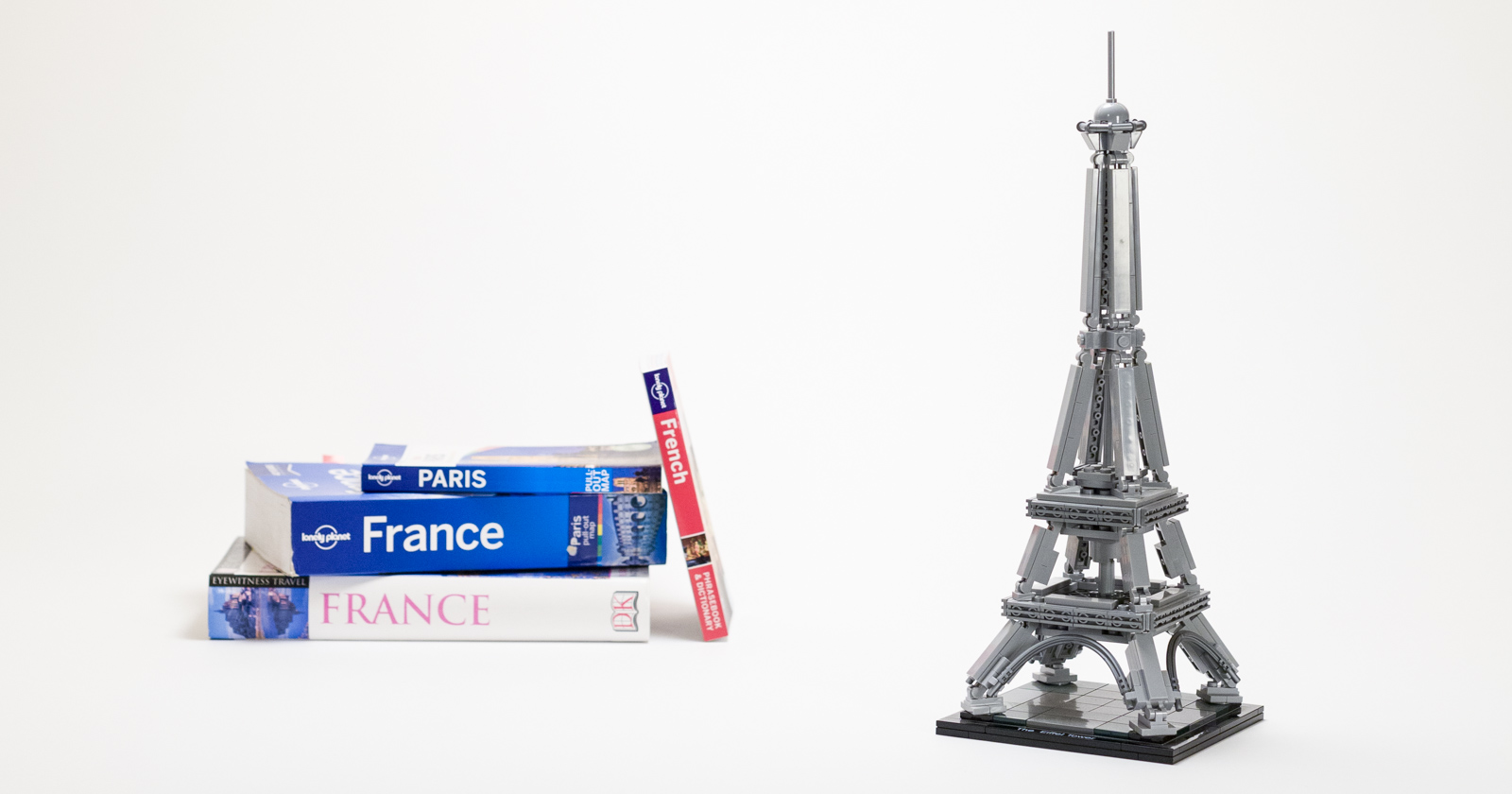 I can’t imagine many settings where this set wouldn’t look wonderful. It’s instantly recognizable and shows non-AFOLs the versatility of LEGO. For these reasons, this set earns our Must Have (5/5 star) rating. You can still find a new copy of #21019 Eiffel Tower for under $50 on the secondary market—it’s worth it.

#21019 Eiffel Tower is a set that belongs in every LEGO Architecture fan’s collection. Do you have it yet? Will you be picking it up? Let us know in the comments below.
The LEGO Group provided this set for the purposes of this review. The opinions in this article are strictly my own—providing sets for review does not guarantee a positive review. Photos in this article are by Michael Kindness unless otherwise noted. Visit the About page for more info about our journalistic standards and affiliate programs.