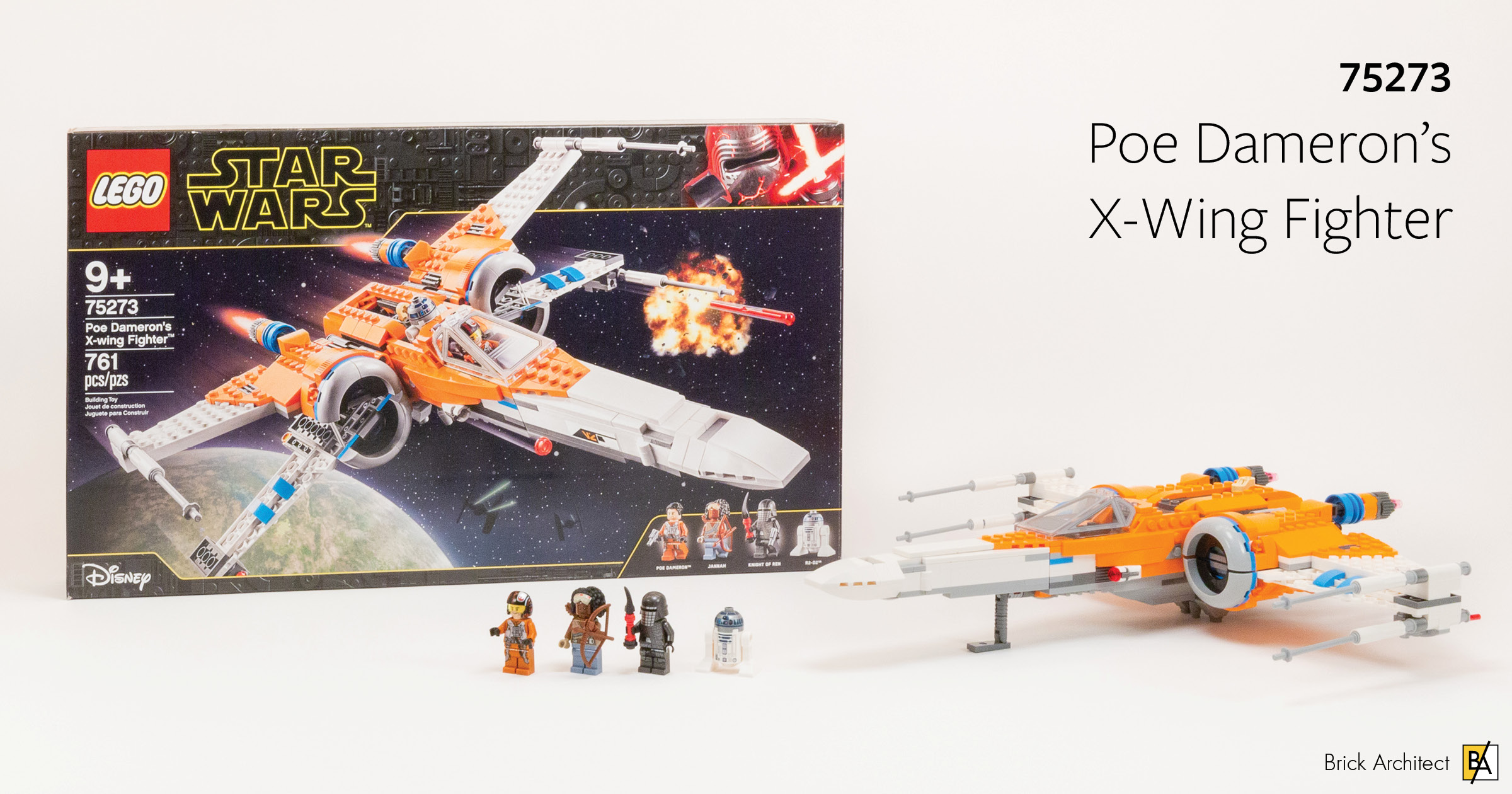 Should you add a sharp-looking X-Wing decorated in resplendent orange and azure accents to your Fleet? Let’s take a test drive and find out! 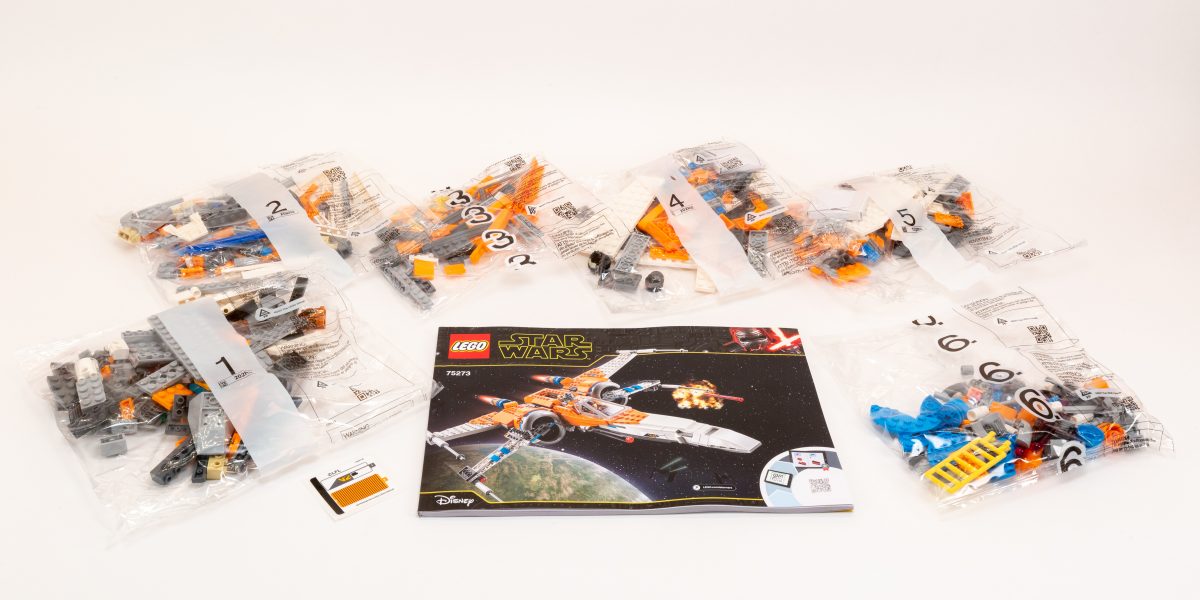 Bag 1 is quick to build, and has some fun, interesting components. In this bag, it appears that we’re building the front, pointy part of the ship, along with two minifigures: R2D2 and Poe. Poe’s minifig comes with two optional head coverings, which increases his playability. 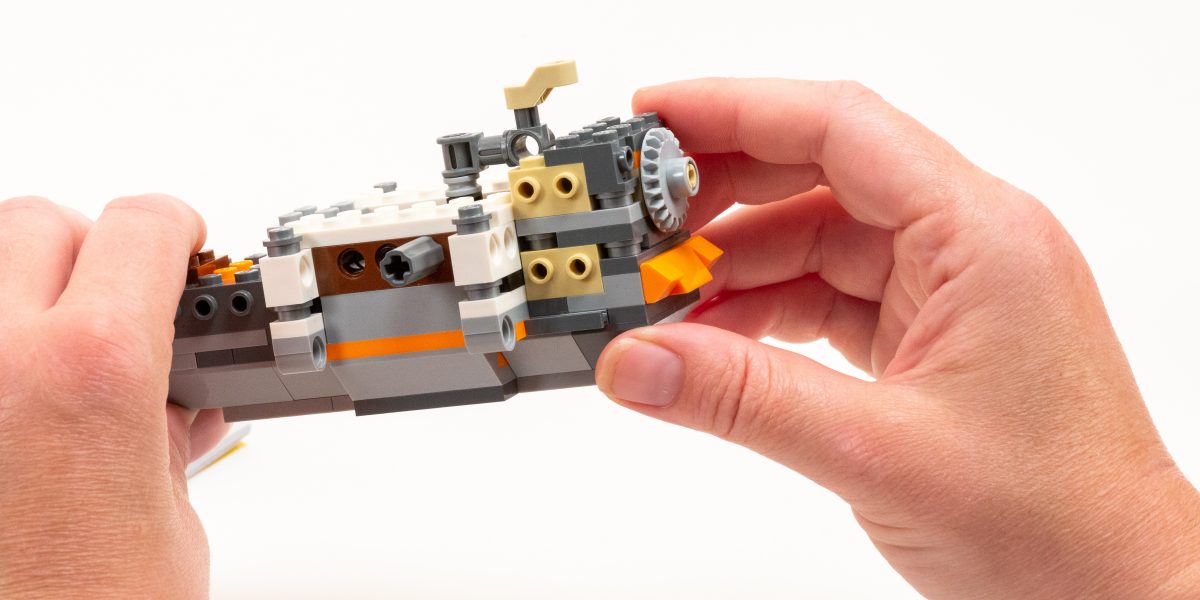 Both Technic and regular bricks used to create the central assembly,.

The most interesting part of this bag is how simple Technic pieces are incorporated with traditional bricks. I’m interested to see how they help the model come together. 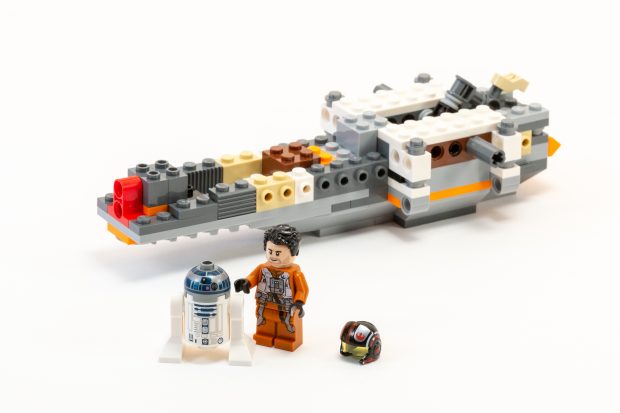 Progress at the end of Bag 1.

In Bag 2, the bulk of the center of and front of the ship really come together. The nose is more complex than it looks from the outside, and has some fun part usage in order to achieve the slight curve from the middle to the nose of the ship. There is a reasonably complex Technic structure in the center of the ship, where the wings and landing gear attach. There is an axle which protrudes from the base of the center, which when pushed down by the weight of the ship, rotates the upper mechanism where the wings will attach. I’m excited to see the movement that this adds to the ship once complete.

Progress at the end of Bag 2.

Bag 3 adds some nice finishing touches to the rear and sides of the ship. Two matching modules on the sides add some lovely lines, which really help define the form. Curved pieces in the back add some nice dimension around the rear engine. 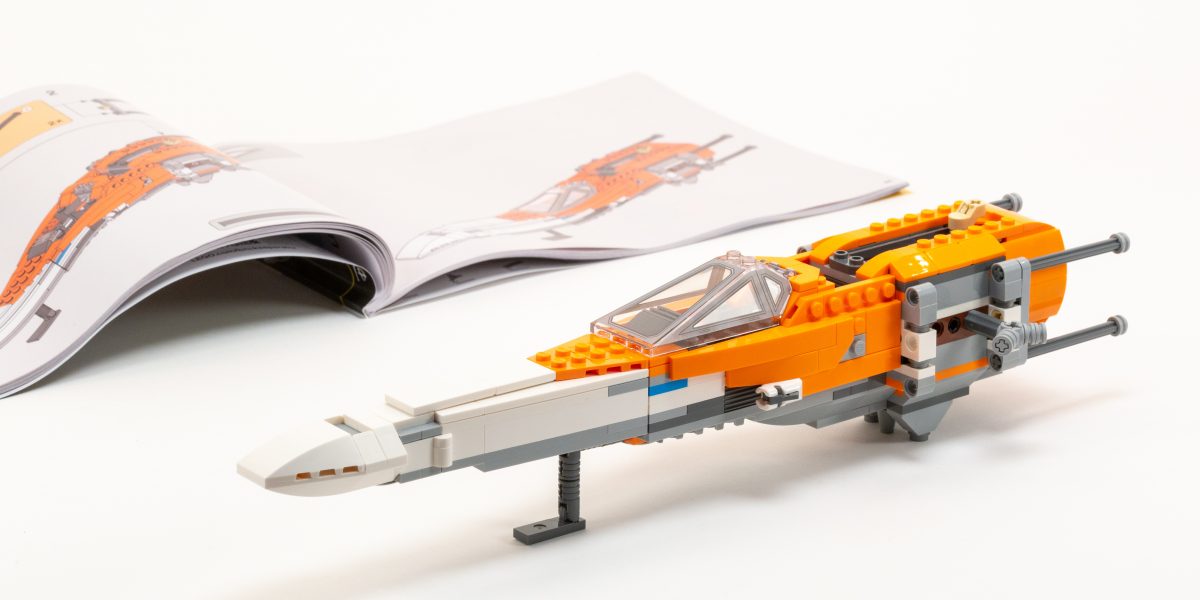 Progress at the end of Bag 3.

These two bags add the wings to either side of the ship, giving the iconic X-wing shape. This part of the build wasn’t too challenging, and mostly involved stacking plates rather than some of the other sections of the ship, which integrated technics mechanisms and pieces. I do like the continuity of the bold color usage that appears to stream down the top and sides from near the nose to the rear engines.

The left wings are assembled in Bag 4.

There is also some interesting part usage with studs facing outward where I anticipate the wing engines will attach in Bag 6. The top and bottom wings are held together with rubber bands, and the technic lever in the center of the ship turns an axel which then forces the wings open. The bands seem tight though, and it takes a bit of force to open the wings into the X-shape. So far, there is not an obvious way to keep the wings open, though hopefully there will be in the last bag!

This bag adds all the finishing details to the X-wing: the front and rear engines, final wing details and play features such as guns and an entry ladder. The finished product is a very nice-looking X-Wing with a satisfying shape and color palette. 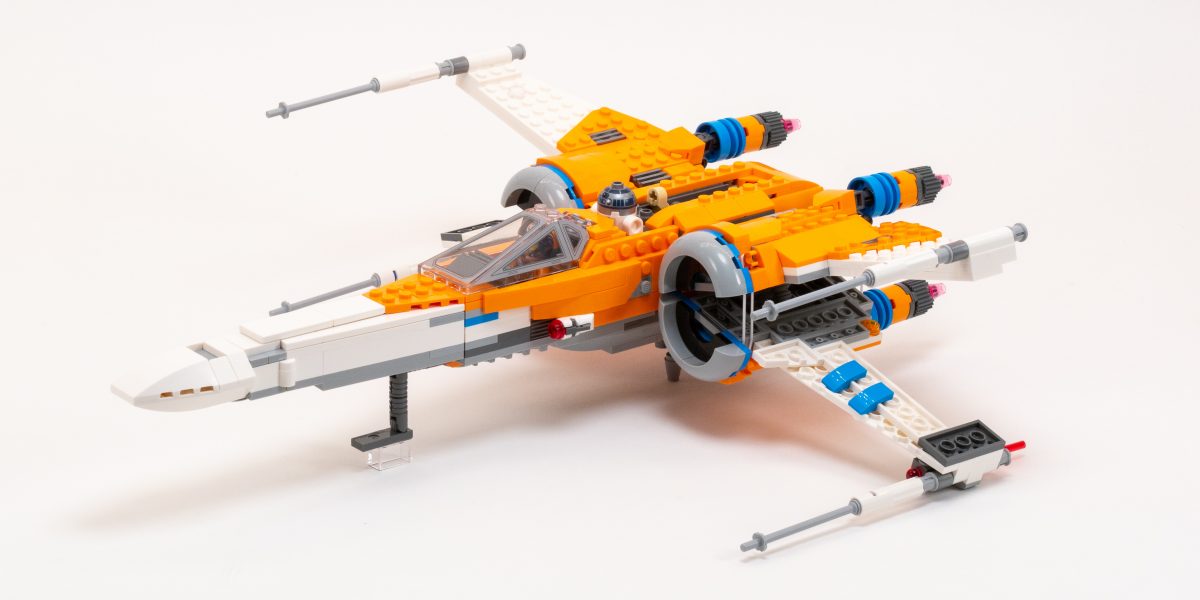 The big discussion with this set is an exciting new rounded corner part. This set also includes a ton of relatively common parts in 106Bright OrangeOrange, a color which has become a lot more common in recent year. This set takes full advantage of this wide selection of orange pieces, and includes an existing part in orange for the first time. 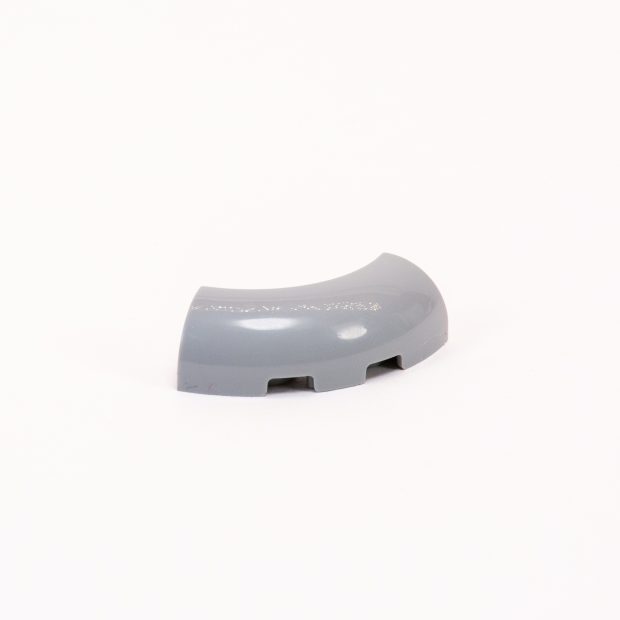 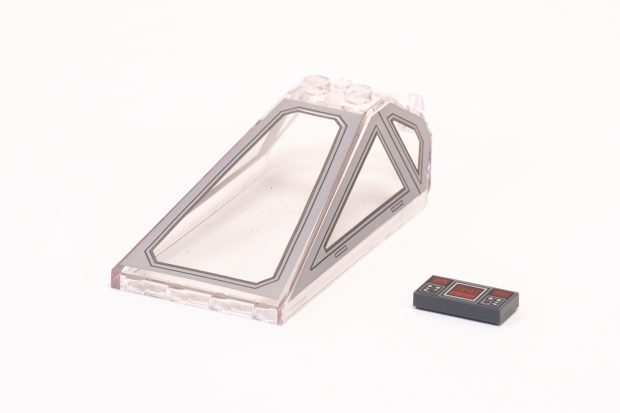 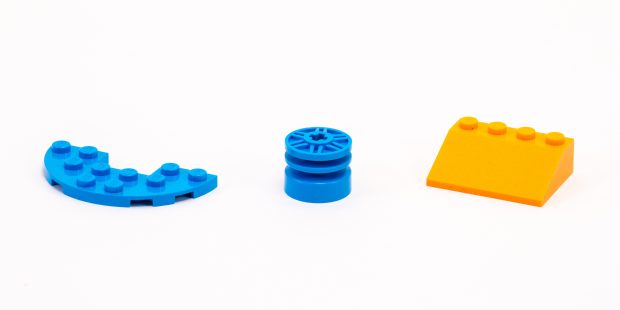 The model comes with a very small sticker sheet. It doesn’t feel necessary as the finished model looks great without the stickers. 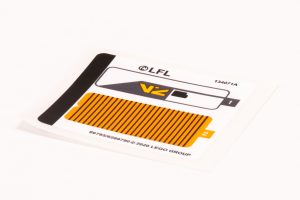 Including R2D2, there are four minifigures in this set, including two which are exclusive to this set. 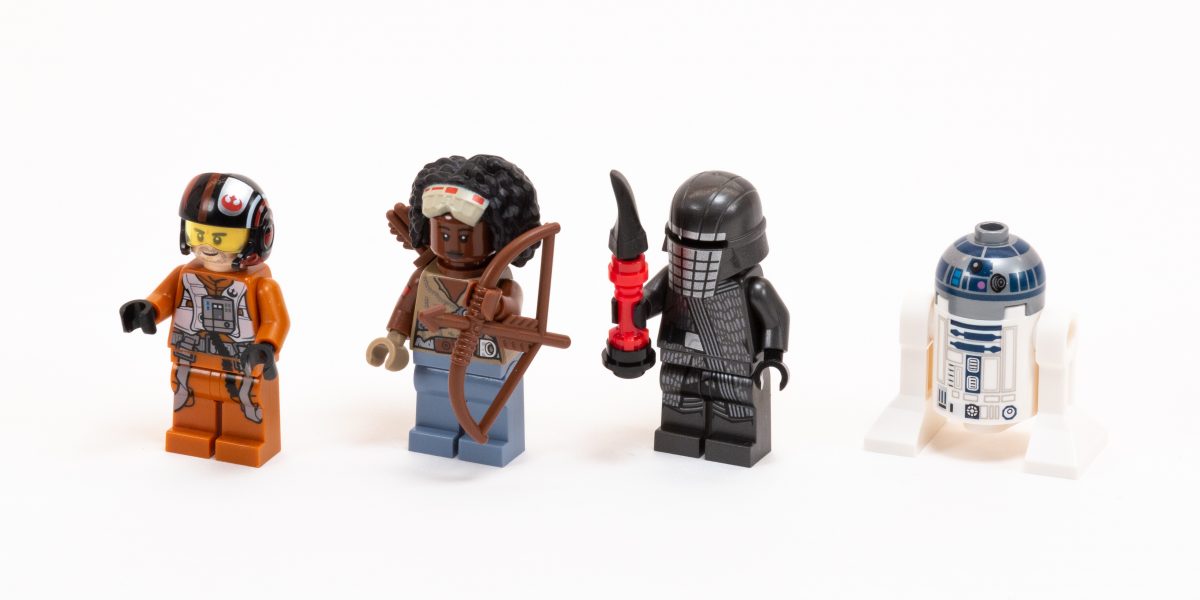 Jannah is wielding a Bow and Arrow, and a Quiver on her back. Her face, Hair, and Torso are new prints. Vicrul is one of the Knights of Ren, featuring a new printed Helmet, Torso, and Legs, all in 316Titanium MetallicPearl Dark Gray. Each of these two unique Minifigures sell for about $15 on BrickLink.

As noted earlier, #75273 Poe Dameron’s X-Wing Fighter is a really good looking X-Wing, with a strong color palette due to the Orange and Azure accents. This makes it easy to recommend this set if you plan to display it on a shelf. 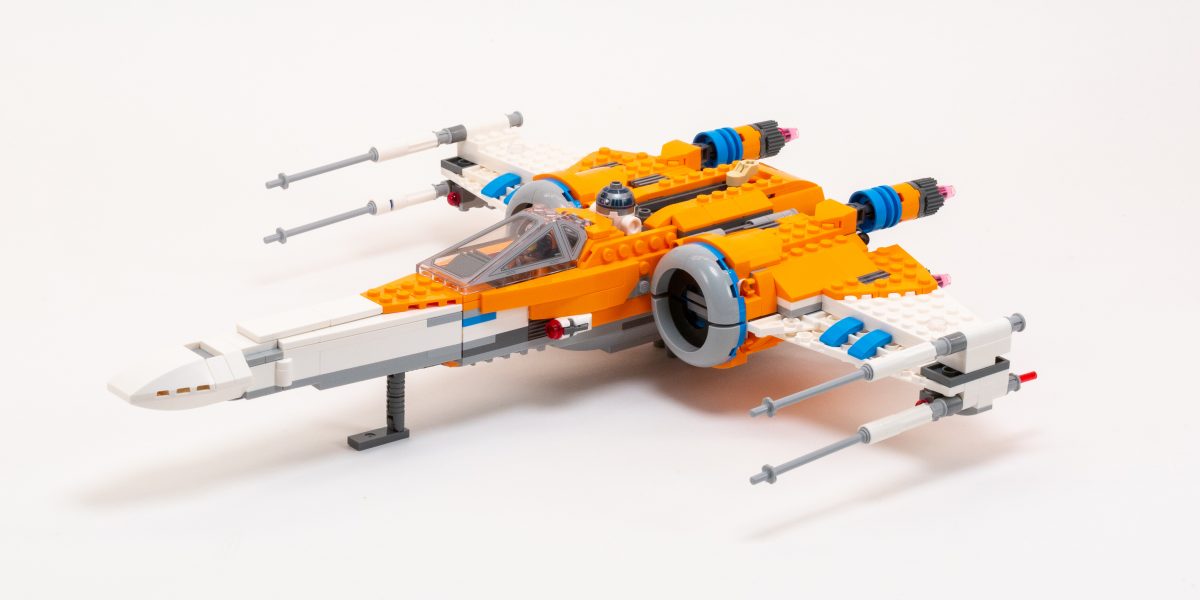 True to the films, the wings return to a flat position when placed on a table.

While this ship does have play features, I found them almost impossible to use. It lacks “swooshability”, as there is no real way to hold the ship that does not cause the wings to retract, the guns to fire, or random landing gear to fall off. While this may make the ship feel more true to Star Wars canon (where the rebel ships were a mishmash of parts held together with duct tape and hope) it leads to a model that neither Tom nor I could figure out how to hold.

When we factor in the overall aesthetics, good-looking minfigures, interesting new parts, and the flawed play features, we have a set that’s pretty average overall. That’s why it earns our Good (3/5 Star) rating. That said, it almost earned a higher rating, and is an especially nice display model.

Should you decide to add this great-looking ship to your fleet, please consider buying #75273 Poe Dameron’s X-Wing Fighter using our referral links to Amazon.
The LEGO Group provided this set for the purposes of this review. The opinions in this article are strictly my own—providing sets for review does not guarantee a positive review. Photos in this article are by Tom Alphin unless otherwise noted. Visit the About page for more info about our journalistic standards and affiliate programs.