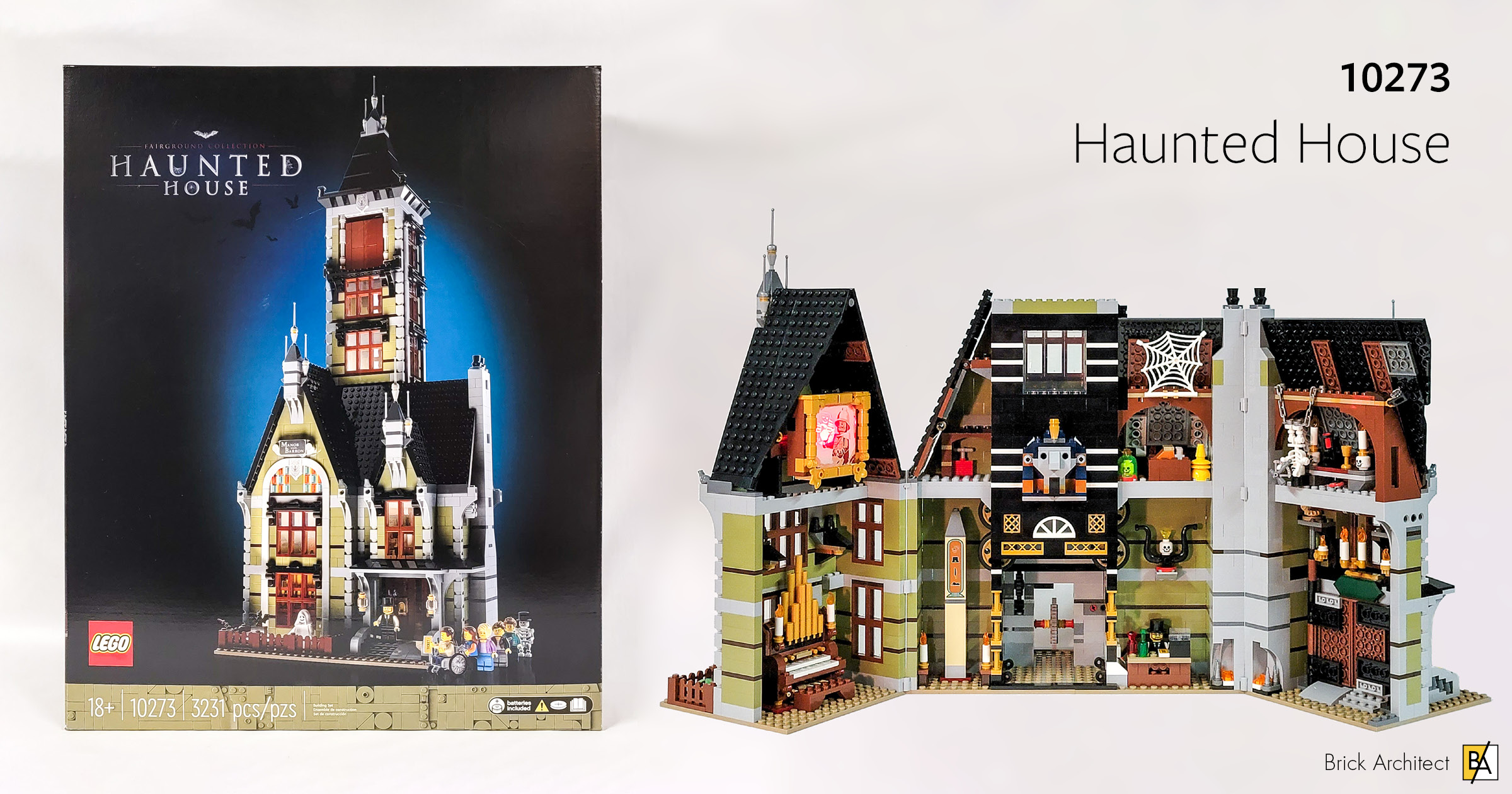 A spooky LEGO set based on a popular amusement park ride — yes please! 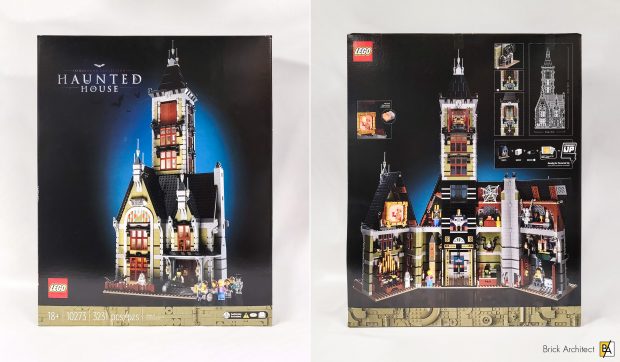 It was released in May 2020, so this review might be getting close to the set’s retirement. That said, if it remains available through the new year I expect that they won’t retire it until after Halloween 2022 at the earliest.

The set touches on two themes that LEGO fans love – the Monster Fighters theme that retired in 2014, and the Fairground Collection that is ongoing. Other recent theme park attractions include #10261 Roller Coaster (released in 2018) and #10247 Ferris Wheel (2015-2018). From the Monster Fighters theme, the obvious comparison is #10228 Haunted House, which is considered a classic set by many fans.

When they announced the latest edition to the theme park rides was a Haunted House, I was skeptical. However, Haunted House themed attractions are favorites with theme parks the world over. Disney has had such attractions at some of their various parks including The Twilight Zone Tower of Terror since 1994 which is similar to our LEGO version as in it’s a free-fall drop ride that is just shy of 200’ in height but look little like our LEGO rendition. They also have the Haunted Mansion ride in an antebellum style which architecturally the LEGO set is much more akin to, but that is more of a ride than a thrill. 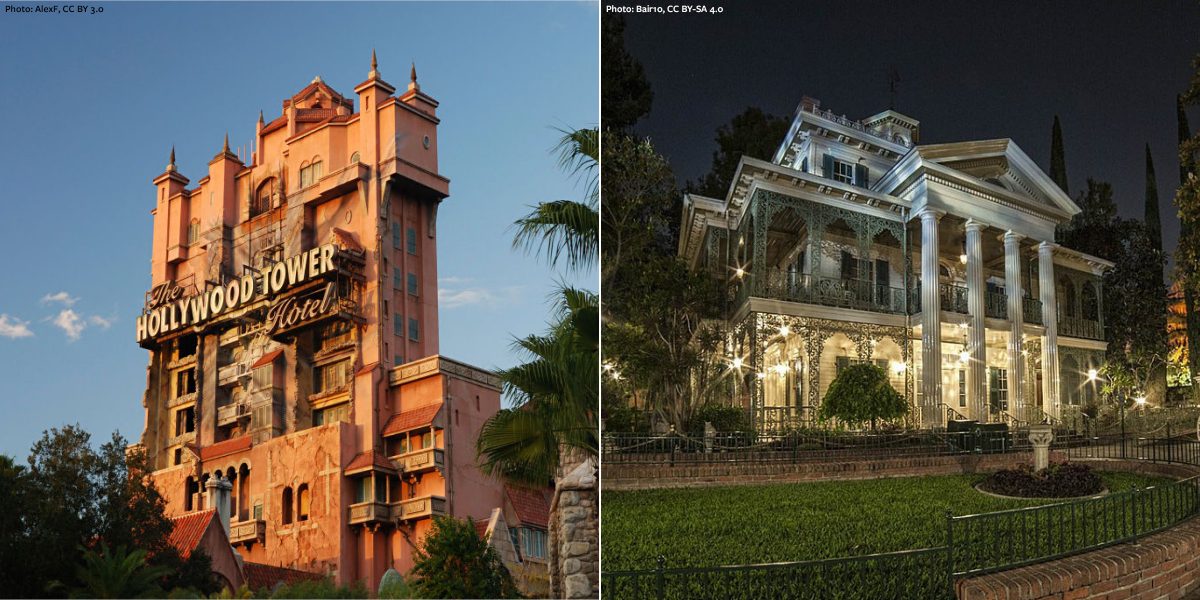 Haunted mansions, ghost rides, and free-fall drop rides have been around for a long time with Disney’s first Haunted House opening back in 1963 and first generation free-fall rides becoming popular back in the 90’s.

We have identified a bunch of different influences that may have shaped how this set was designed – Let’s see if a single set can effectively bring together the best of Haunted Mansion (starring LEGO’s dastardly evil Samuel von Barron), the free-fall ride of Tower of Terror and (for those old enough to remember it) the architectural styling of the original Addams Family House. Read on if you dare! 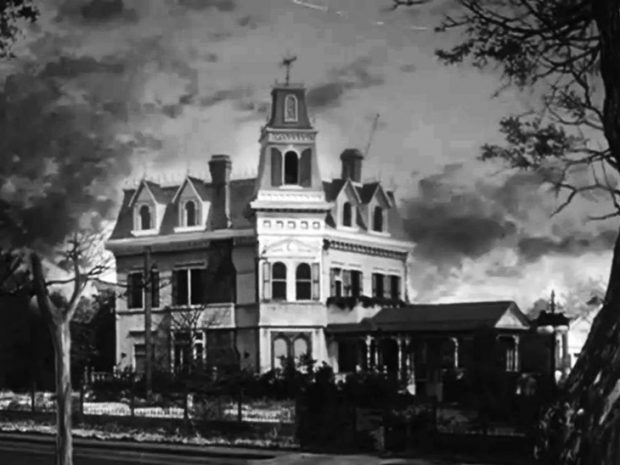 Addams Family House, as it appeared in the 1964 TV Series (Photo: MGM Studios)

First up, we find that LEGO has created a backstory for this project. On the first couple of pages we’re introduced to that backstory and have a photo of the folks who worked on the set done up as the Barron. Sadly, the Barron isn’t actually one of the minifigs included in the set. Throughout the book as you build stolen artifacts and other goodies left behind from the Barron they have included some fun tidbits of backstory and you’re encouraged to go look up more but it’s nothing but an ad for the set that we already have purchased. This is a fail in my book.

The various objects throughout the building are fun — you can imagine yourself going through the ride and seeing the various objects seen throughout the house. This includes how the Barron built the mansion around the Face of the Sphinx (as explained on pg 147), except it is hidden in the attic where no one in the house would be able to see it. If they didn’t make a big deal about this in the instruction booklet, I wouldn’t have minded this as much. 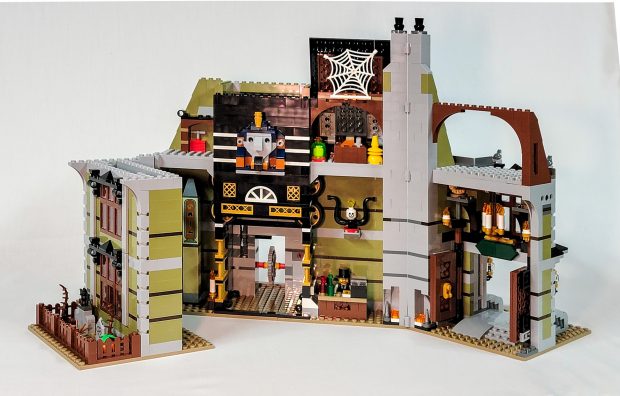 The next issue is of a similar vein. There is the Portrait of Samuel von Barron (pg 227) which is super cool, and has light up functions. You might think minifigures would be able to see it through large 5×6 window in the ride, but it doesn’t actually line up. This is a missed opportunity. When looking through the rear windows as the ride goes up you just see the back of the roof. That said, the designers seem to have realized this and stuck an easter egg in that spot; a camera catching a photo of you screaming as you plummet.

The front section of the building is bilateral (two sides) while fully opened it functions as a triptych (two hinges and three panels). If they designed the model so that it opened up on the side instead of down the front, both of these issues could have been addressed, and they could have created a more convincing ride. 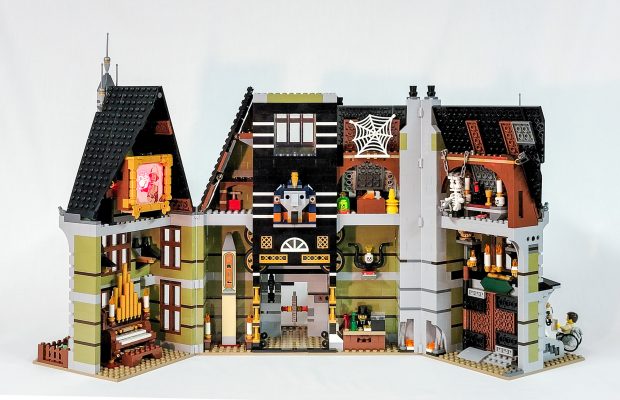 Haunted house complete, with only the tower to go.

On the plus side, the main room contains the Heads of Anubis (pg 132) which frame the main front windows nicely looking in. Also within this space is the Organ of Catarino (pg 101) and the Obelisk of Evil (pg 94). The height of the room is designed for the massive organ and obelisk but from an interior designer perspective the organ blocks any view out those two story tall windows. Switching these two items around would make for a more livable interior and let you look out the windows to enjoy the views of the two family tombstones. 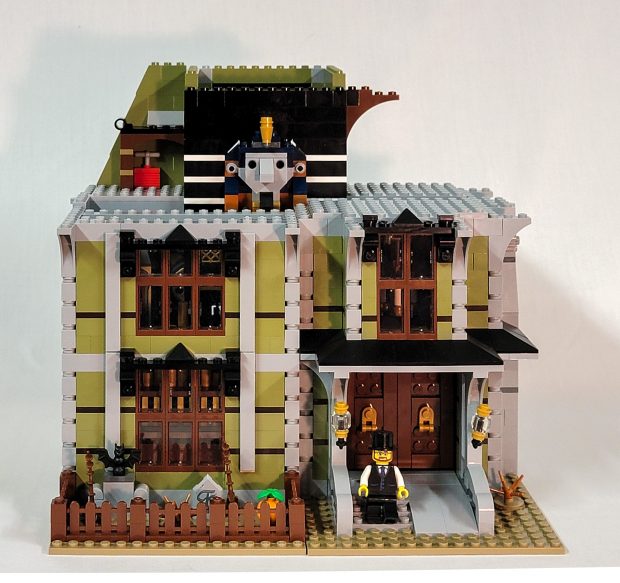 Front of the partially completed model.

Now, as for the ride itself? I wasn’t sure what to expect even as I built it. It wasn’t clear what all the gears and wheels were going to do, but it works perfectly. The elevator goes up, reaches the top, the doors open to look out and then… whoosh — completely awesome! The ride falls down the equivalent of 7 stories; you can see just how tall the mansion actually is by showing it next to the Statue of Liberty. 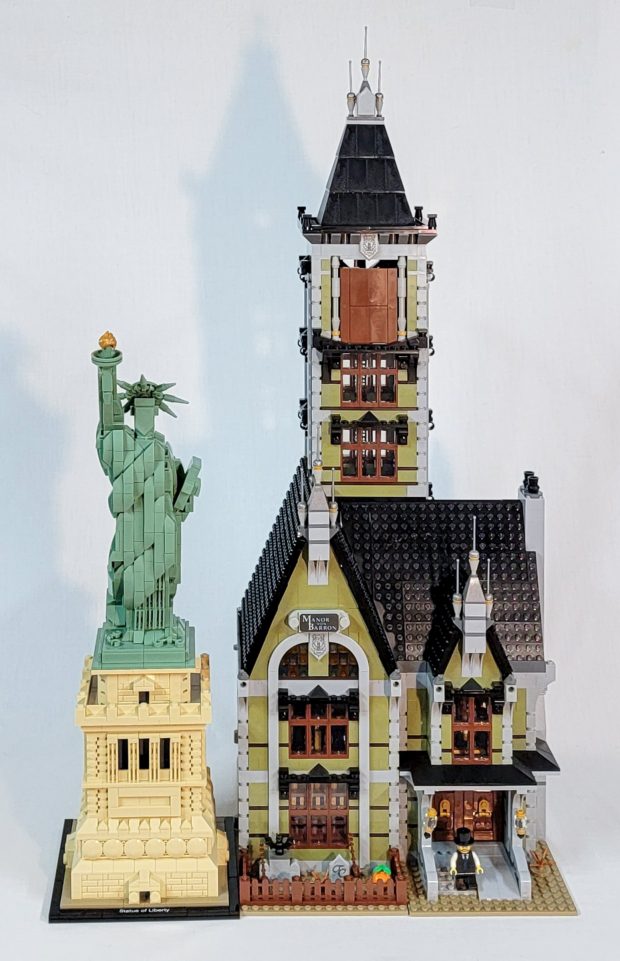 Wheels are hidden in the second floor that connect to a set of flywheels that take up energy from the falling car, slowing the car down enough to rest gently on the rubber stoppers for just a moment before the next cycle takes the car back up again. Audibly, the sounds it makes are so pleasing to hear: the gears turning, wheels spinning, and car moving with the clickety clack sound of an old coaster.

The entire mechanism scores a perfect score in my book. Not sure how they could have done it better, although I do have some extra links so I may just have to see if I can make this another couple stories higher! 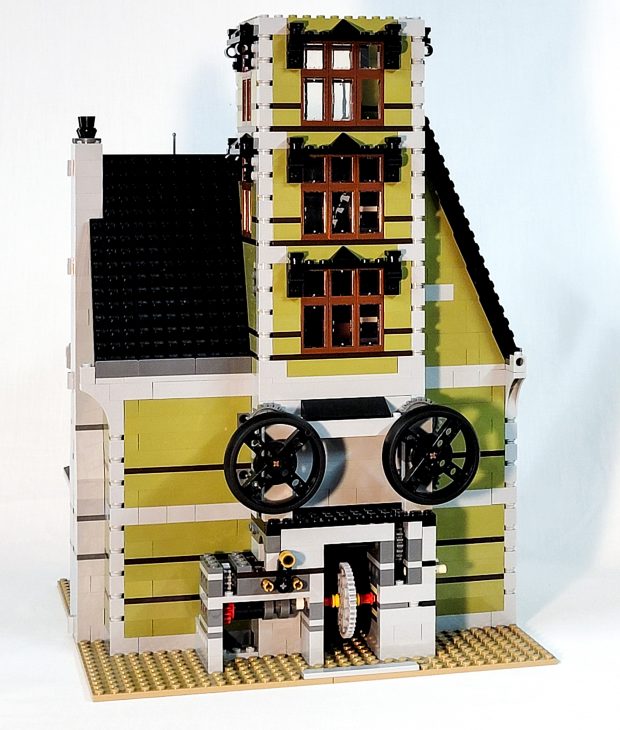 Flywheel on back of model.

Unfortunately, after playing with it for a short time, the bottom gear started to slip. The chain wasn’t tight enough any longer to maintain contact at the bottom of the ride so instead of lifting the car, the chain slipped on the gears. I was able to remove a single link and with a bit of persistence get the links aligned again with the gearing. After that it was running mostly smoothly. You can hear in the video below the gear slip for a second in the fifth run and I’m not certain I’ll be able to remove another link and still have there be enough to close the loop.

Lastly let’s look at the architecture of the build. A key feature in most architecture is repetition within a building. Our mansion uses this throughout with the window treatments utilizing mullions to delineate a double height window with a single height window on top, the frieze above and at the sides of the windows remain constant throughout as well. Trim work including the alternating block and pip in light grey at all the corners and the brown striping around the building help coalesce a uniform look. 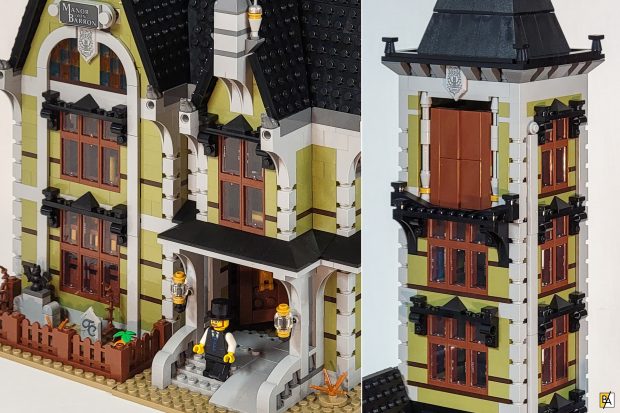 Roof peaks have a prominent triple mini minaret atop each roof made from foils and lightens what is otherwise a rather heavy architectural style. There are also various scupper outlets on the eaves for water to come out of with grey frogs being used as gargoyles. However, while the other items repeat, LEGO skimped and only use 4 frogs while we have 6 scupper outlets. I saw this the moment I first saw the box and was a little disappointed by that.

One of the only things that I see missing in the architectural stylings here is a widows walk which would have fit in nicely along the roofline parallel to the front of the building. On the exterior there is little that can be found lacking otherwise and I like how it looks. I just wish I could fit this into the rest of my modular city scape.

Alas, it can’t fit into a modular city as designed, because in order to open we have four 16×16 plates rather than using a single 3×32 plate. For this reason, it’s slightly higher than the surrounding buildings so a sidewalk won’t work and the hinges on both side of the building stick out precluding it abutting your neighbors building. (However, the HOA might have something to say about the lawn needing some water.) 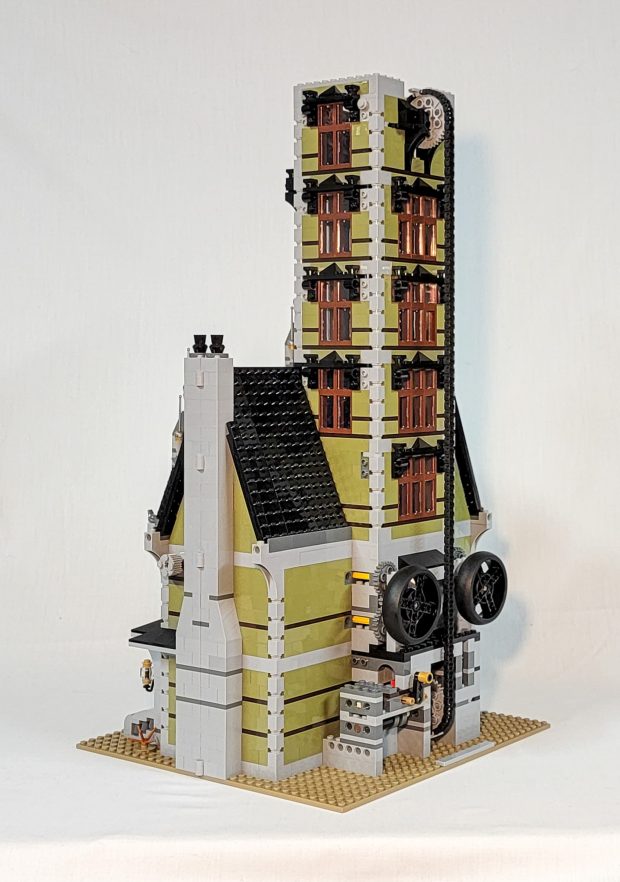 The hinges along the side interfere with adding this to you Modular street.

All told, I really like this build, and while there is finger numbing repetition in connecting all 148 chain links together, the build flows nicely for a 3,231 piece set and the commentary throughout the 300+ page book is enjoyable. I should note here that this set actually has two different versions. The second version was redesigned to add an extra link to the chain in step 440 which makes little sense to me as more links only means additional slipping. There are also no unique pieces in this set and most pieces appear to be relatively inexpensive on Bricklink. 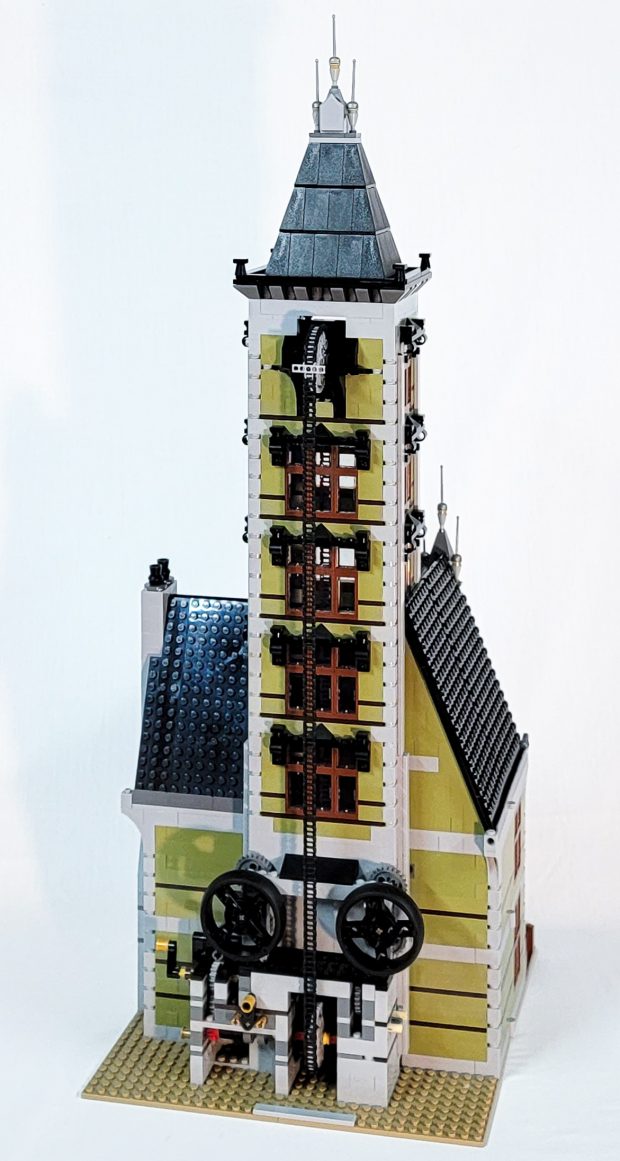 #10273 Haunted House – Completed model, as viewed from the back.

The set is broken into bags numbered 1 thru 18 with some having two bags per number and some of the steps being fairly quick and easy to complete. All told I put this set together over the course of a couple of evenings so it wasn’t a super lengthy build, but I liked watching it come together.

Keep in mind that if you put down the $249 for the set and want it so you don’t have to spin the crank yourself, you’ll have to add an additional hub (part 88009) for $50 and two medium linear motors (part 88008) at $17 each, but those are currently out of stock and when back in stock all three items will be an additional $84, however I see no reason why you couldn’t use an older PF battery box and a couple of PF motors to run this setup for way less cost if you have the parts.

Haunted House in all of it’s spooky glory!

All said, The set earns our 4/5 Stars (Recommended) rating due to the excellent play functions, but we will have to lower that rating if the mecanism continues to strip gears more as I continue to play with it.

#10273 Haunted House is perfect for a haunted LEGO scene, and can be adapted to fit in your Modular city — have you added it to your collection?
The LEGO Group provided this set for the purposes of this review. The opinions in this article are strictly my own—providing sets for review does not guarantee a positive review. Photos in this article are by Jeannie Jonas unless otherwise noted. Visit the About page for more info about our journalistic standards and affiliate programs.