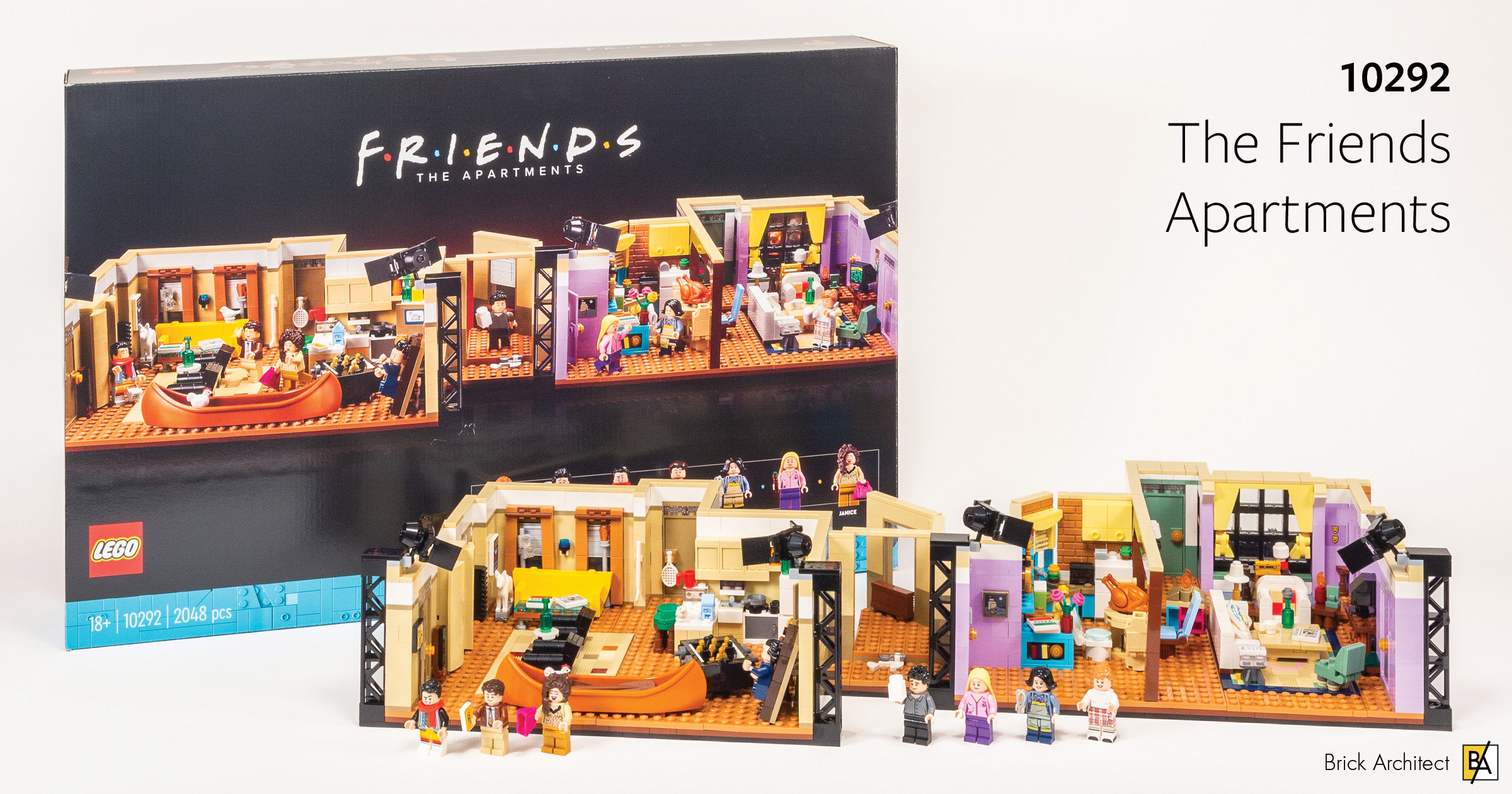 At double the size of the wildly successful LEGO Ideas set based on the classic 90’s sitcom, The Friends Apartments captures many more details for die-hard fans.

#10292 The Friends Apartments will be released worldwide on Wednesday May 19th at LEGO.com and LEGO-Brand Retail Stores (or Tuesday, June 1, 2021 without VIP membership).

Just looking at the front of the box is enough to make the Friends theme song start playing in my mind, as my eyes struggle to drink in all the tiny details packed into this set. There’s the giant poking device they use to poke Ugly Naked Guy! There’s the Etch-A-Sketch on the back of Joey and Chandler’s door! There’s the foosball table! Is that a cheesecake on the floor of the hallway? Yes, yes it is. And what is Joey’s minifig wearing? “I’m Chandler, could I BE wearing any more clothes?”. These are just some of the Easter Eggs waiting for the builder to discover.

When I just look at the front of the box, the two apartments, joined by a hallway, seem a bit too cluttered with Friends ephemera. It’s as if the designer wanted to put all of their favorite elements from their favorite episodes into one set, regardless of season or continuity across the two apartments. Once I spin the box around, it seems as if this is meant to be more of a play set, where pieces can be added or removed to create various beloved scenes. The minifigures break this assumption a bit though, because many wear specific costumes strongly associated with specific episodes. For example, Joey’s minifigure is dressed for the episode “The One Where No One Is Ready”, and doesn’t really work for other episodes. Obviously these minifigures could be swapped out with the previous Friends set if that bothered the builder.

It appears that this will be a fairly straightforward build, though there are some elements that I’m excited about. I’m curious about the angled walls and the prominent ceiling beam in Monica and Rachel’s apartment, and I’m excited about the cabinets and floor insert in Joey and Chandler’s apartment. I anticipate this being a relatively fast, enjoyable and nostalgic building experience.

The box is pretty large and heavy, which is not surprising given that it includes more than 2000 pieces. (The LEGO Group is getting better at reducing empty space in the box to cut down on shipping expenses.) 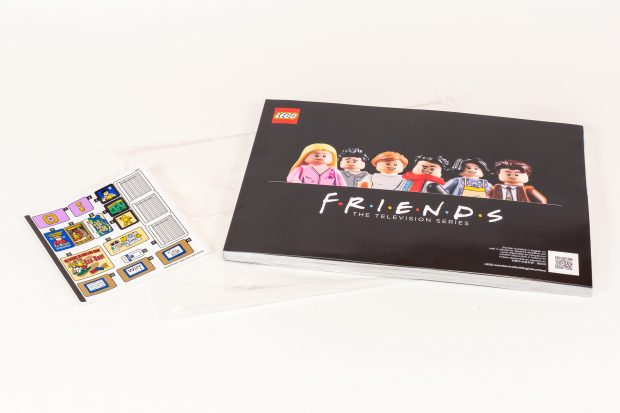 The build process takes place over 15 stages, although it is easy to take a break halfway through since each of the two apartments takes about half of the overall build time. 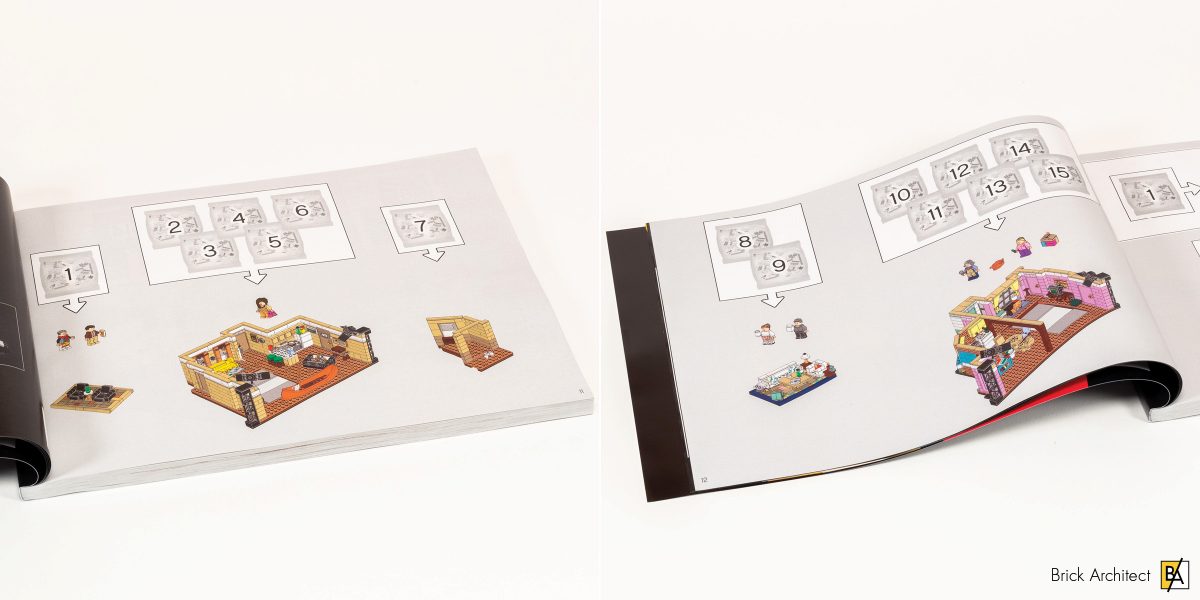 Joey and Chandler’s apartment would not be complete without their signature recliners, so it is fitting that these are included in the set. Both chairs “double recline”; they rock back a little, stop, and then rock even further. The first recline is achieved using technic parts built into the floor, and the second using a bar and clip connection at the back of the chair. Both chairs move at the same time and cannot be reclined independently.

While this re-creates scene in Season 2, Episode 15 where Joey and Chandler “double recline” in their new chairs while groaning with pleasure, the play feature does not work well recreated in LEGO. There isn’t quite enough clutch power to hold the minifigures into the chairs after the first recline, and the minifigures tend to tumble backwards if you don’t hold their legs down for the second recline. Nevertheless, the movement is engaging, and it’s a nice Easter egg for fans.

In bag 2 we build a rigid base for the apartment. The base is three plates thick, with a recessed area where the module built in the previous bag will slide in. While this stage doesn’t offer much for fans, you will find 2×2 Round Plates (part 4032) in the show’s iconic red, yellow, and turquoise colors hidden within the base. 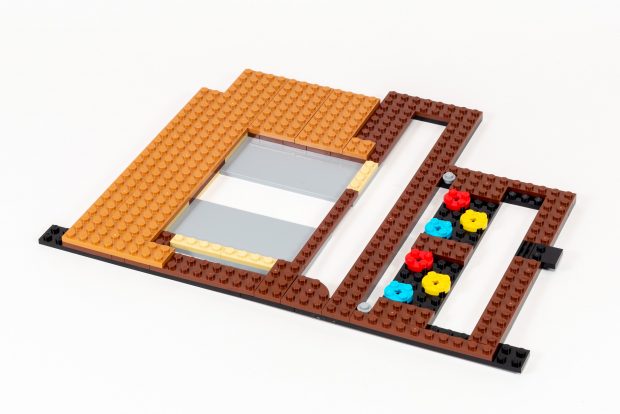 Near the end of bag 2, you will find Friends colors hidden in the base.

In bag 3 we build the kitchen and back walls of the apartment. The kitchen is rich with details from the show, such as the green bar stools, red coffee mug, wall hangings and appliance locations. There’s some nice parts usage for making the bar stools using telescopes for legs, and using new part 1×2 ½ (part 68013) in 1White to create the sink. The cabinets are created using opaque window panels and matching 1×2×2 Windows (part 60592) in 5Brick YellowTan. 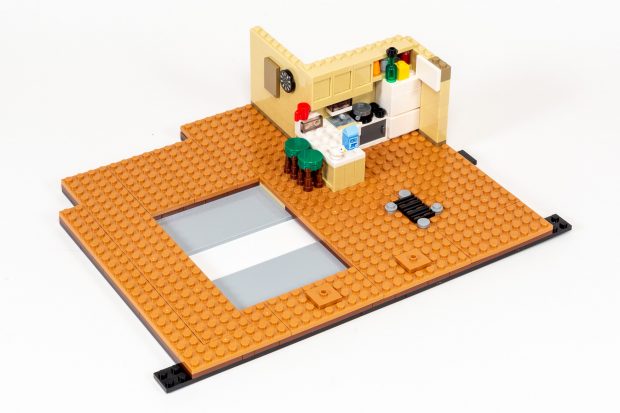 The richly detailed kitchen is built in bag 3.

In bag 4 we build the doors to the apartment and to the bathroom, along with the back and right-side walls. We also add a side table, some fun posters, sports equipment, and the foosball table. The foosball table cleverly uses nanofigs (part 90398) to represent the players and was the most engaging part of this bag for me to build. I enjoyed how it was placed at a slight jaunty angle in the apartment, rather than having all the elements on a 90-degree angle. 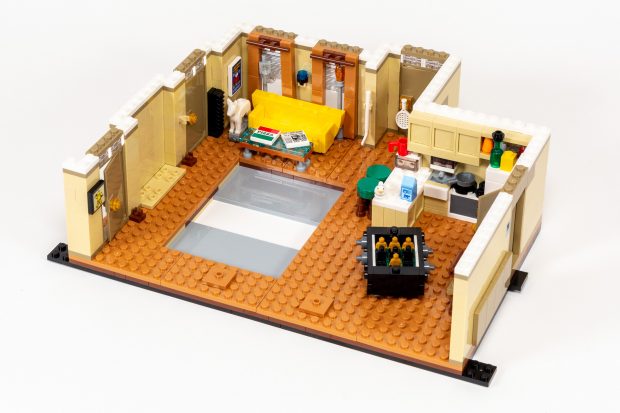 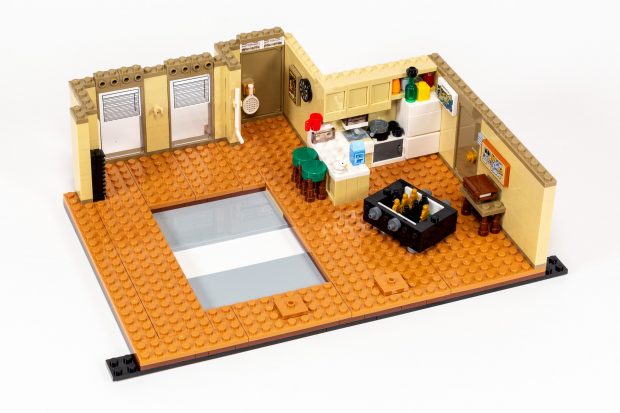 A cleverly built foosball table is the highlight of bag 4.

In bag 5 we build the doors that lead to Joey and Chandler’s bedrooms, along with the bright yellow couch, the coffee table, (complete with a pizza box, of course), and some lighting. The biggest Easter egg detail in this bag is the ridiculous, large, white dog that fans will recognize from when Joey’s option was picked up from Days of our Lives.

Lots of details and easter eggs for fans in bag 5.

In bag 6 we put the finishing touches on the apartment, adding the tv consul the tops of the walls, the lighting rigs, and fan details such as the canoe from The One With The Cat (Season 4, Episode 2) as well as the chick and the duck from The One With The Chick and The Duck (Season 3, Episode 21). I found the tv console fun to build, and it was very satisfying to finally slot in the recliner module. 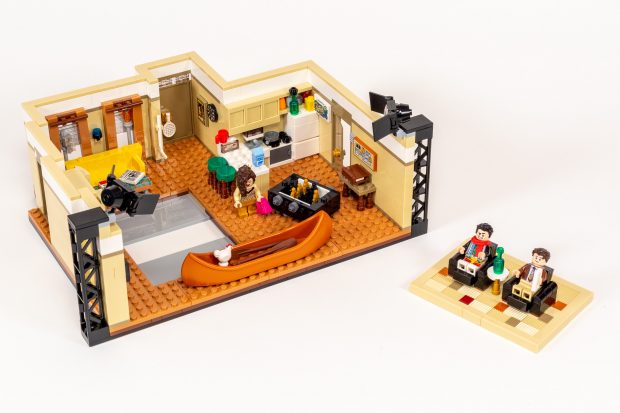 Finishing touches of Joey and Chandler’s apartment in bag 6.

In bag 7 we build the hallway between the two apartments. It is angled to the left so that when viewed straight on, it seems as if it continues to the stairwell. The radiator is somewhat awkward to add because of this angle. This could have been left empty, but instead includes the detail of the half-eaten cheesecake on the floor, complete with spoon, from The One With All The Cheesecakes (Season 7, Episode 11). 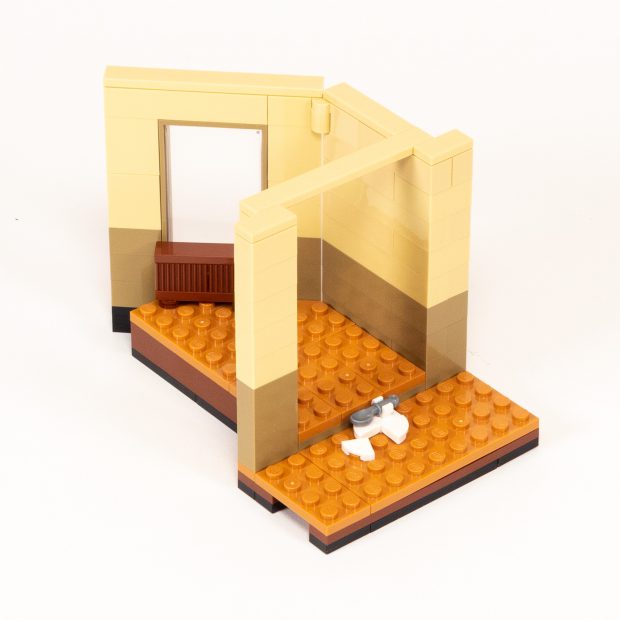 Bag 7 adds a simple hallway which bends to the left.

In bag 8, we build the floor insert for Monica and Rachel’s apartment. It has more color and a more intricate design than Joey and Chandler’s floor, though it comes together much more quickly because it doesn’t have the reclining mechanism. There are a few exposed studs for attaching the chairs and couch. 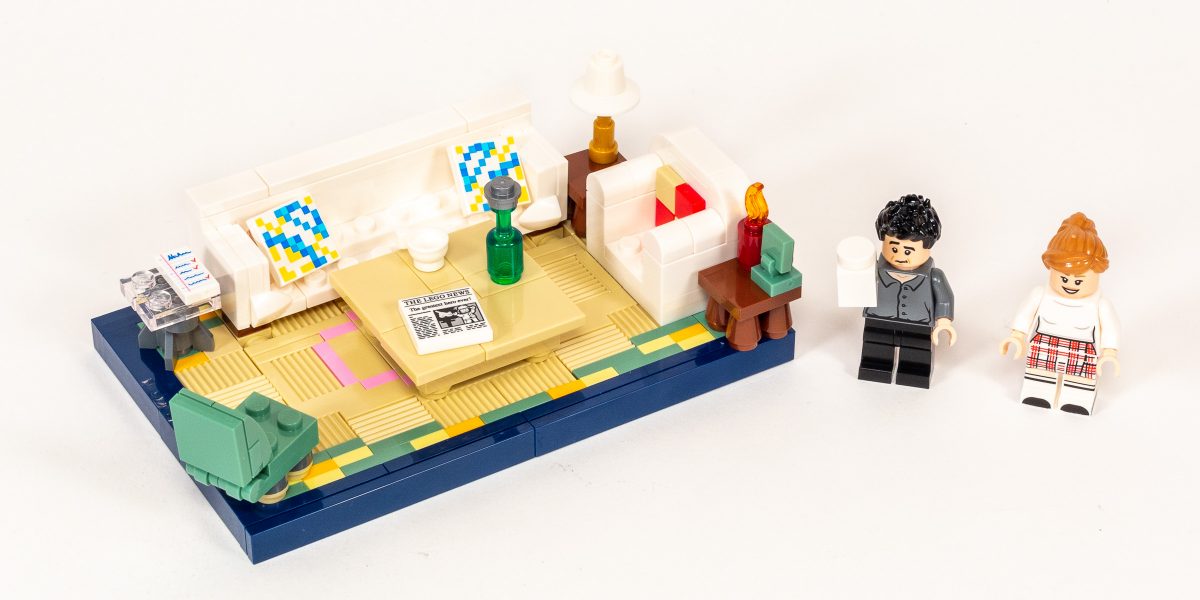 The couch and table insert sits on an intricate rug pattern.

In bag 9, we build the couch, chairs, tables, and various ephemera. The pillows on the couch and chair are good approximates to those in the actual apartment, as is the glass-topped table with Monica’s message pad. It is clear that the designers attempted to replicate the floral pattern from the rug in the show, but I don’t think it quite comes through in the Lego model. The best part of these two bags for me was building the couch. I especially like the piece that attaches the pillows, which really gives it dimension.

In bag 10, we build a stable base for Monica and Rachel’s apartment. I found this to be the most finicky bag of the build thus far, but it is quick, and like Joey and Chandler’s apartment, includes the iconic red, yellow and turquoise dots under the flooring as a nod to the show’s logo.

In bag 11, we build the first sections of wall in Monica and Rachel’s apartment; the side with the doors to their respective bedrooms. We also build the base for the bay window, along with the entertainment center, small corner table, and some various odds and ends. The TV was especially fun to build, as it has some creative SNOT work, and the corner table is cleverly crafted from a quarter round stud perched atop a telescope. The fan details in this bag include two art pieces, and a football game being broadcast on the TV, which is a nod to The One With The Football (Season 3, Episode 9) where the friends watch a pro football game to avoid helping Monica in the kitchen.

In bag 12, we build the balcony, (which cleverly uses black sausages to create the curved tops of the fire escape), the closet, the exterior walls, and add some fun fan details. Four white telescopes are stacked to create the giant poking device used in the appropriately named The One with the Giant Poking Device (Season 3, Episode 8) to check on the well-being of Ugly Naked Guy. A tiny cat is also perched on the balcony railing, poised to ruin Ross and Rachel’s kiss from The One With The Blackout (Season 1, Episode 7). 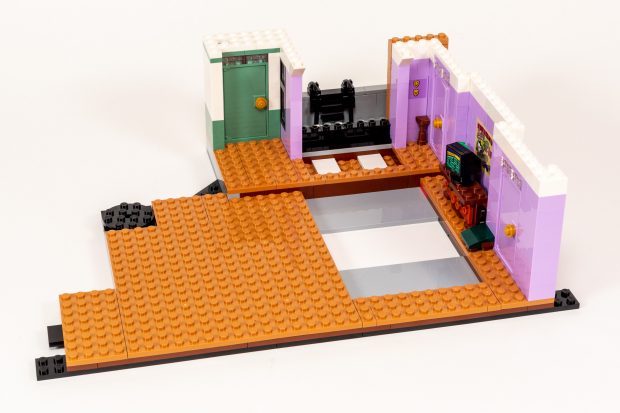 In bag 13, we construct and slide in a desk and floor platform by the window and begin constructing the kitchen. The latter plays a key role in many episodes, so it will be interesting to see how much detail the designers manage to sneak in. The corner sink is achieved through clever use of a spinning circle part, which allows the studs of the sink to be offset from the rest of the apartment, granting a nice level of realism. 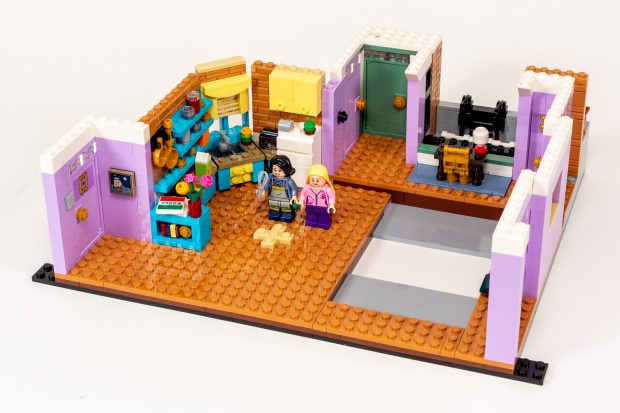 The kitchen comes together nicely in bags 13 and 14.

In bag 14, we build more details into the kitchen by adding the stove, spice rack, bookshelf, cabinets, refrigerator, and window dressings. We also add the front door with its iconic gold frame, (though I wish this were done with a brick rather than a sticker). Monica’s kitchen is full of color, knickknacks, and cookware, so it’s nice to see so many little pieces included in the model. I especially liked how the curtains and blinds were built with some nice SNOT work. 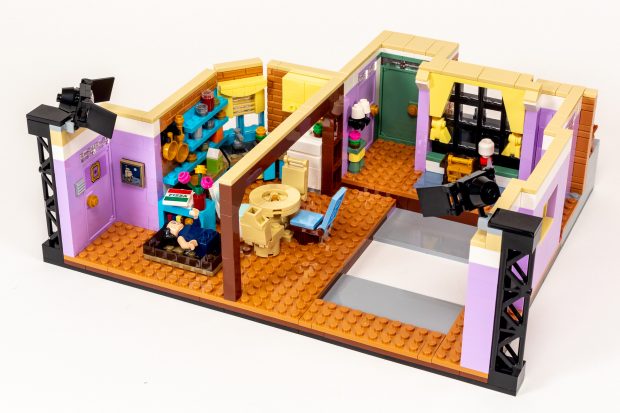 In bag 15, we add the table and kitchen chairs, the caps for the walls, the large, hinged bay window with their yellow dressings, and the light rigs that mirror the other apartment. A few last fan details are also added, like the “junk” in Monica’s secret closet revealed in The One With The Secret Closet (Season 8, Episode 14), and the hideous ugly painting from The One With Ross’ Grant (Season 10, Episode 8). Finally, we slot in the floor, and the apartment is finished!

This set was super fun to build. The techniques were challenging enough to keep me engaged, but never so hard that a casual builder like me felt overwhelmed. All of the fan details are fun, though it’s a bit discordant to have elements from so many different seasons all in one box. It could have been interesting to have just the two apartments as a set, then have different seasons be “expansion sets” to add on to the apartments. That said, the details added a lot of whimsy and made me smile while building.

I give #10292 The Friends Apartments a Recommended (4/5 star rating) for being a fun, relatively quick build chock full of nostalgia. (It also helps that it’s a good value with anice selection of parts and minifigures.) If you are a Friends fan, you will have a good time building this one!

Like what you see? You can add #10292 Friends Apartments when it is released worldwide on Wednesday, May 19, 2021 (with VIP membership) at LEGO.com (and LEGO-Brand Retail Stores).
The LEGO Group provided this set for the purposes of this review. The opinions in this article are strictly my own—providing sets for review does not guarantee a positive review. Photos in this article are by Tom Alphin unless otherwise noted. Visit the About page for more info about our journalistic standards and affiliate programs.