This review is a bit late (since the set is no longer available), which is why I’ve taken a more casual look at this cute, but flawed set.

I work really hard to ensure that articles/reviews on the Brick Architect website are meticulously edited and have amazing photos.  Whenever possible, this includes getting someone else to proofread an article before it is posted. This attention to detail is part of our brand, but it’s also exhausting at times! That’s why I’m trying something a bit different – a very casual review of a smaller LEGO set that we wouldn’t usually bother reviewing on the site. 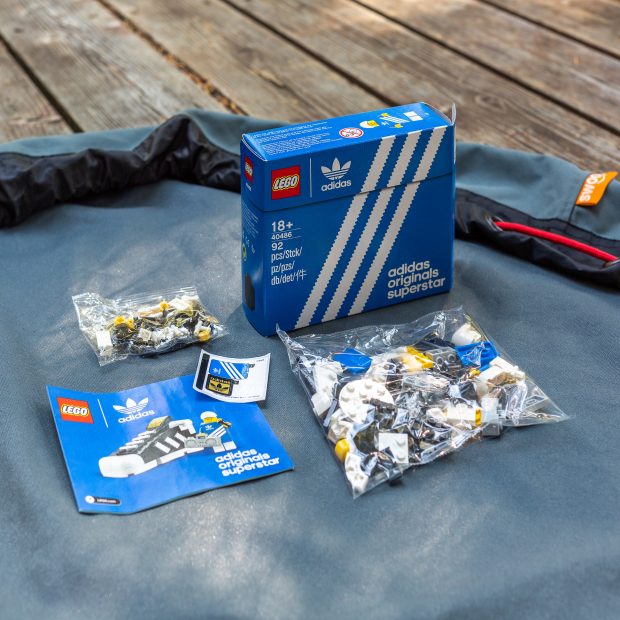 This small box was intended as a gift-with-purchase coinciding with the release of its larger cousin, but that promotion was ultimately poorly executed due to higher minimum purchase thresholds than made sense, and some other availability issues.

#40486 Adidas Originals Superstar contains 92 pieces, and the same 18+ age rating as the full-sized shoe.  It was only available as a “free” gift-with-purchase, but has a nominal value of $12.99 on the LEGO.com US Website. While no longer available, I do want to highlight that a lot of fans were frustrated to discover that the minimum purchase amount to get the “free” set was greater than the cost of the #10282 Adidas Originals Superstar, forcing people to add additional items to their cart to qualify.  (I’m sure this was intentional, but it’s an obnoxious pricing strategy.)

The 92-piece set shows a blocky but recognizable ‘superstar’ shoe in black, alongside a minifigure dressed in a blue Adidas shoe box. The minifigure seems like the star of the show, holding a microphone and 80’s style cassette boombox.

I was spoiled in advance of this review to learn that the logo is a sticker and not a printed 2×3 tile.  This immediately tarnished my opinion of the set before opening the box, since I hate stickers in general, and find them completely unacceptable on Minifigures. (While the very first minifigures had stickers, they started printing directly on torsos in the early 80’s.)

The building process itself offers a few small surprises.  The first is the inclusion of quite a few relatively new parts including the new 2×2 rounded corner part and the 4x4x 2/3 rounded part introduced in the Mario sets – both of which are new parts for my collection. 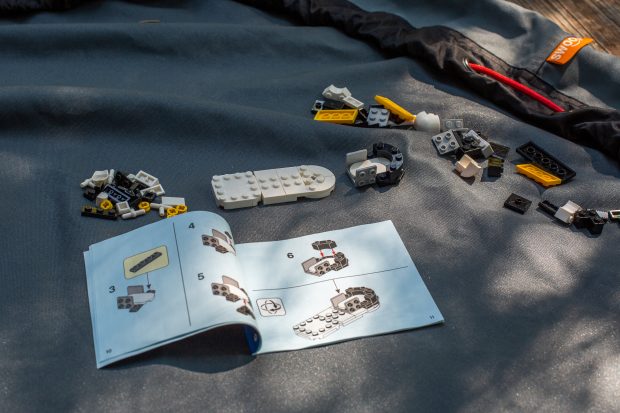 The other surprise is the way in which the laces are attached using a 1/2 bush from the Technic line which simply slides over one of the three connections of the pneumatic ‘T’ part.  This is a somewhat wobbly connection and it is hard to get the laces aligned perfectly, but it seems sturdy enough. 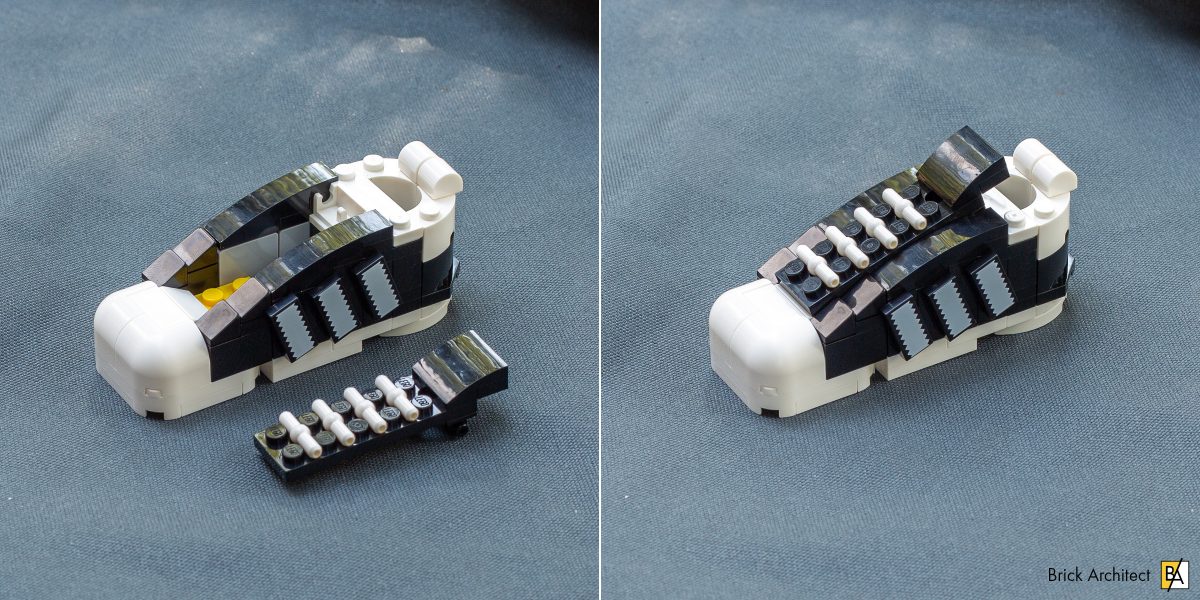 Adding the tongue to the finished shoe.

The final result is good enough, but far from great. Relying on a sticker for the tongue of the shoe reduces the final effect, especially if you also refuse to use stickers. It’s also a bit blocky compared to the larger set which captured the shoe shape much more effectively. (Then again, my expectations wouldn’t have been as high if the larger set wasn’t so good!)

The star of the show for many LEGO enthusiasts will be the minifigure.  Several reviewers have praised the figure for the whimsical accessories and the choice to place the figure inside a show box.  In fact, the 2×3 ratio is pretty close to that of a real shoebox, albeit a bit too thick. 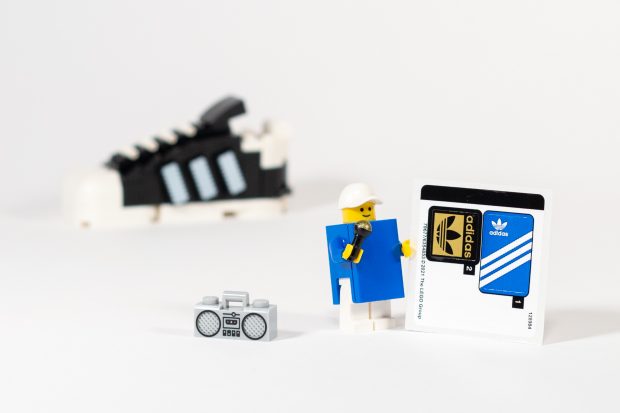 Why is my existential purpose constrained to a sticker sheet?

The problem is that stickers are completely inappropriate for Minifigures.  The crazy thing is that the figure itself does not need to be printed in this instance, since a 2×3 Blue title is attached to the front of the figure.  Now I’m sure collectors will still flock to the figure despite this definitely, as it is a very cute figure that will appeal both to Minifig and Shoe collectors.

I have heard that this has to do with brand guidelines at The LEGO Group, since they do not want to have an official Minifigures with another corporate logo on it because it could erode their patent and/or copyright protections on the Minifigure itself.  I have not heard this in an official capacity, so it’s probably only part of the story

Ultimately, this is a pretty average gift-with-purchase that could have been great if they chose to actually include a printed tile for the Minifigure and shoe.  Instead, the set earns our 3/5 star (average) rating. 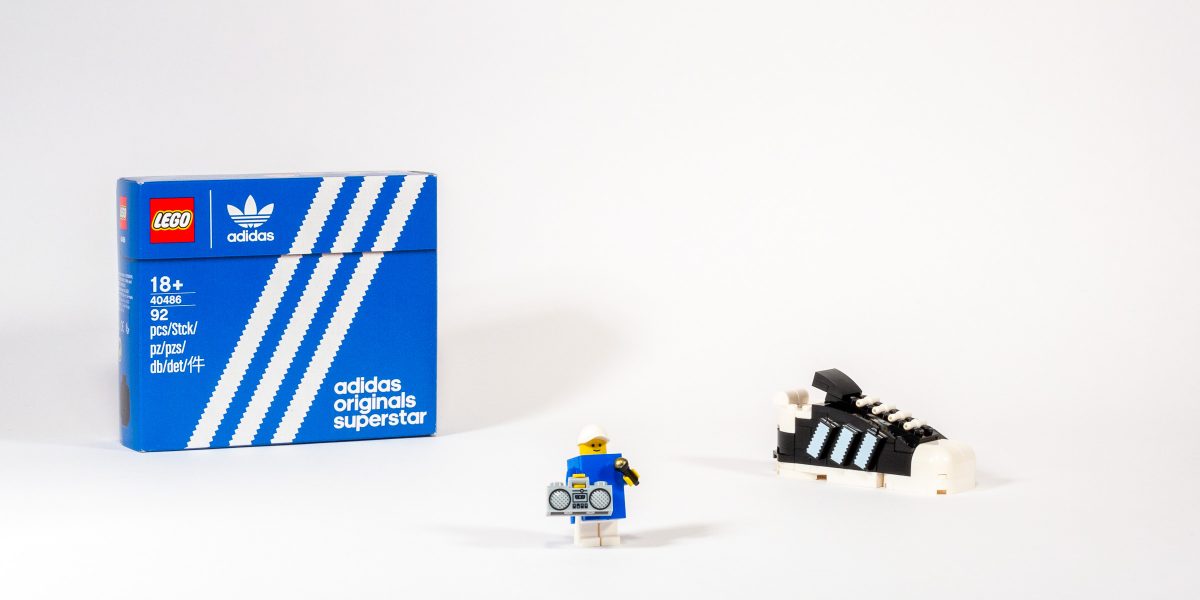 Its already out of stock, so it’s up to you to decide if it’s worth acquiring at aftermarket prices—currently about $25 with shipping on eBay or BrickLink.