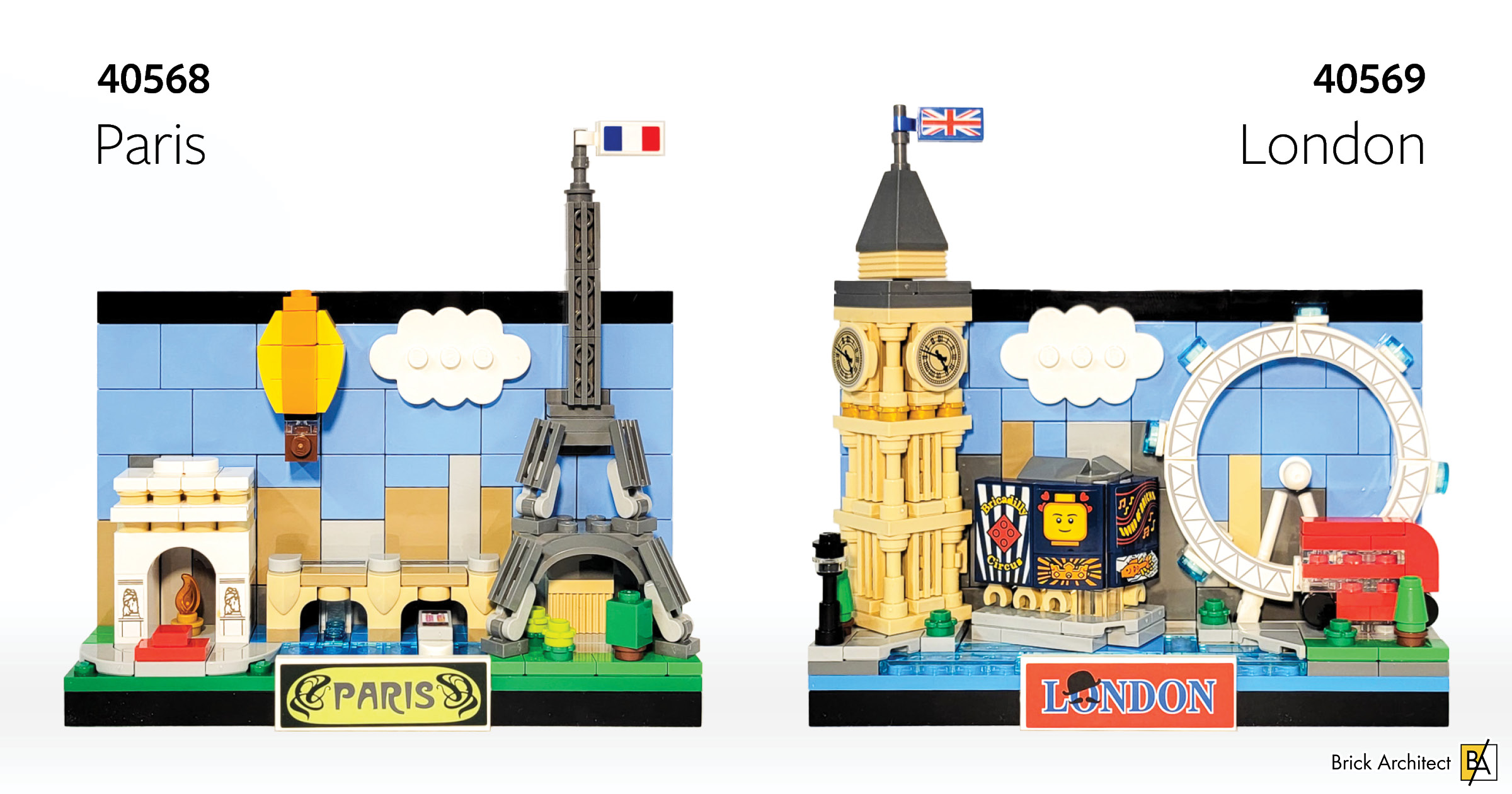 Let’s take a closer look at the next two additions to the growing ‘Postcards’ series — inexpensive mini skylines for a younger audience, and let’s figure out which one rises above the rest!

Upon receiving these sets I was a little underwhelmed by the boxes. While I am deeply interested in architecture, I don’t purchase many LEGO Architecture sets because they offer limited play value and shelf space is limited (what with giant UCS sets taking up much of my shelving). 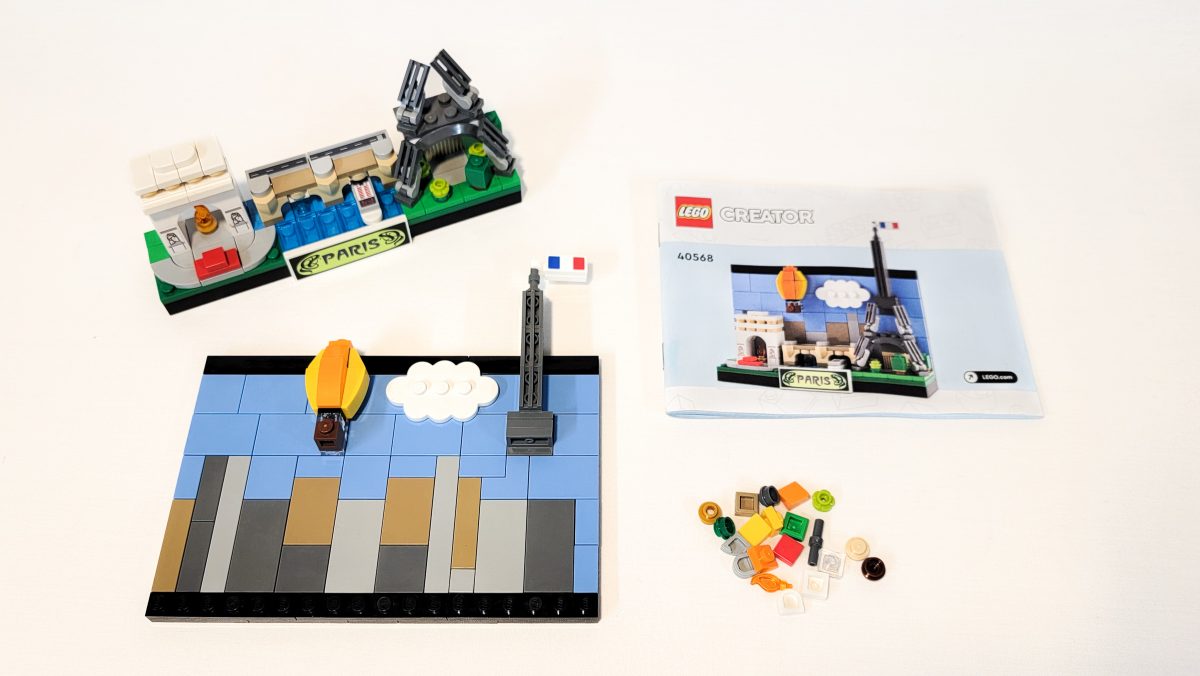 These simple ‘postcards’ offer a decent building experience and a low price.

As I started to build them, I quickly saw the appeal… These are small sets with lots of detail that can be placed on your desk at work or even put on the fridge by attaching a magnet on the back. At just $15, they are easy items to toss in the cart to enjoy a surprising amount of detail and a fun talking point.

As is always the case when building at a microscale, every element must be there for a reason — and having things comparably scaled is super important as something out of scale is very noticeable. With the bright colors and instantly recognizable landmarks, do these sets measure up to the challenge? Let’s find out! 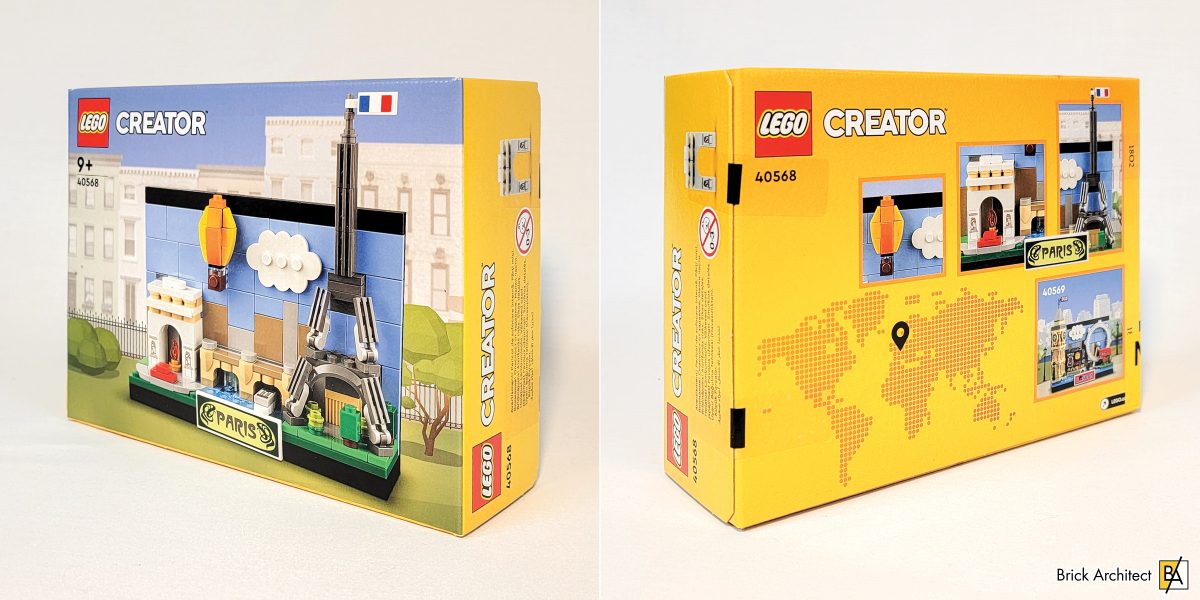 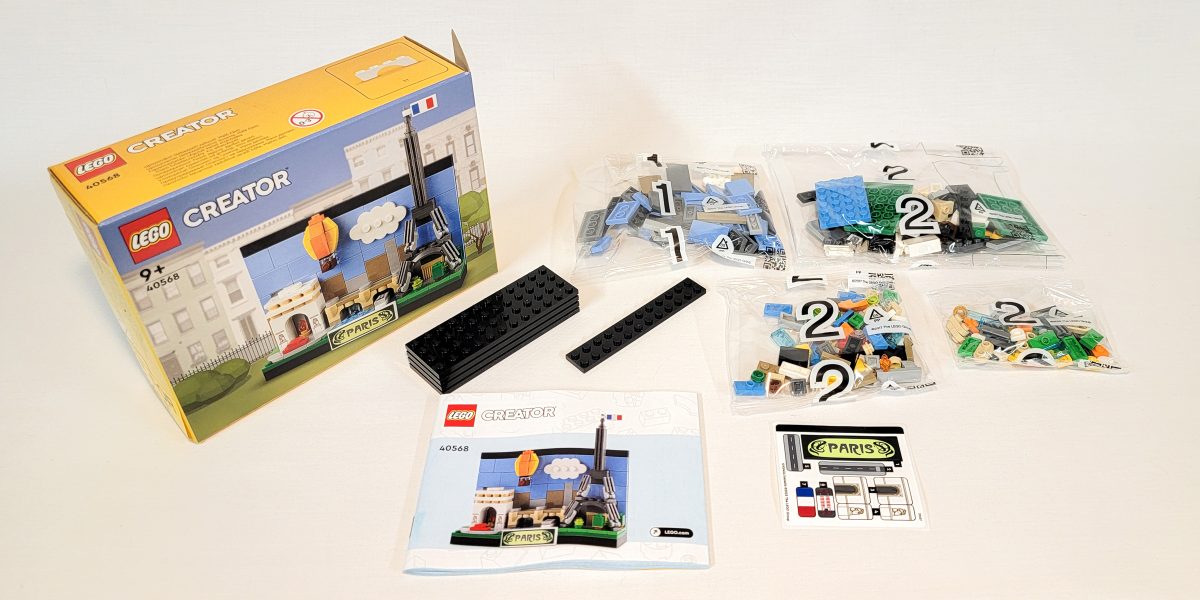 Stage 1, just like with Beijing and New York postcards, the background for Paris is a flat generic representational cityscape. It would be neat if it was a real point of view from the city, but I doubt that it is. You might notice a single stud to hold the hot air balloon from part 2 of the build, and one of the newish 2×2 bracket plates (part 6250018) that is used to build the top of the Eiffel Tower.

The Second Stage brings the city of lights to life. With minimal parts a familiar scene of the Seine with it’s Bateaux Mouches comes to life alongside the Eiffel Tower., and a hot air balloon floating above. Many may not realize, but the first hot air balloon and the first lighter than air balloon flights were both started in Paris. (While the balloon in our model is reminiscent, it would have been nice had it paid further homage to those original intrepid flights and shown in either of the original color schemes.)

As part of the scenery, a small red car is included driving the roundabout in front of the Arc de Triomphe, and here the color is rather jarring in red. However, let’s consider the scales on these included items. A car is about 5’-6’ tall. So, that puts a plate at around 2.5’ to 3’ thick. The Arc de Triumph is 162’ and is built at 13 plates high. That makes the scale height of a plate for the Arc come in around 12.5’ high, so that means the scale of the arc to the car is off by 500%! I think I can forgive this one, even with the huge disparity, but it does show the stark difference in heights and how these are icons of their real structures. 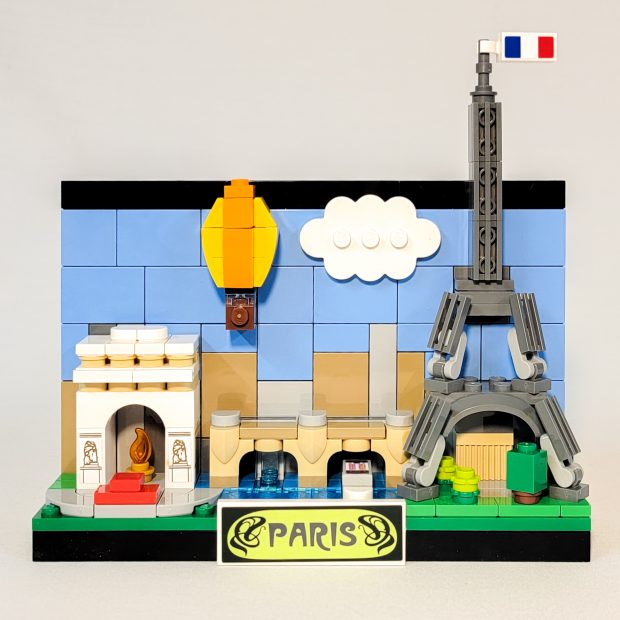 For reference, a hot air balloon is around 80’ tall, and is built about the same height as the Arc, so there’s a 2x difference there as well. As for everyone’s favorite iron monolith. The Eiffel Tower stands erected at a finalized height of 1083’ and while it looks huge compared to the Arc de Triumph as it sits majestically next to the Seine, it’s nothing as to what it’s real scale would be. Let’s go back to that 12.5’ per plate. At 1083’ tall, that’s just shy of 87 plates tall, or 29 bricks tall.

By comparison, most of the modular buildings come in around this height, so I think we have to give the LEGO designers here some leeway as an Eiffel Tower that would stand 3 times the size of the one included would look really out of place in a small diorama such as this. However, it really puts into perspective just how tall it actually is!

I think, despite the obvious scale issues, that this set if a fun set to grab to take you over the next purchase to get that gift with purchase in your cart. I find the top half of the tower is a bit finicky — it wants to pop off at the slightest touch as it’s held by a single stud. Otherwise, the build is solid, colorful, and would look good sitting on your desk as you dream about your next European vacation! 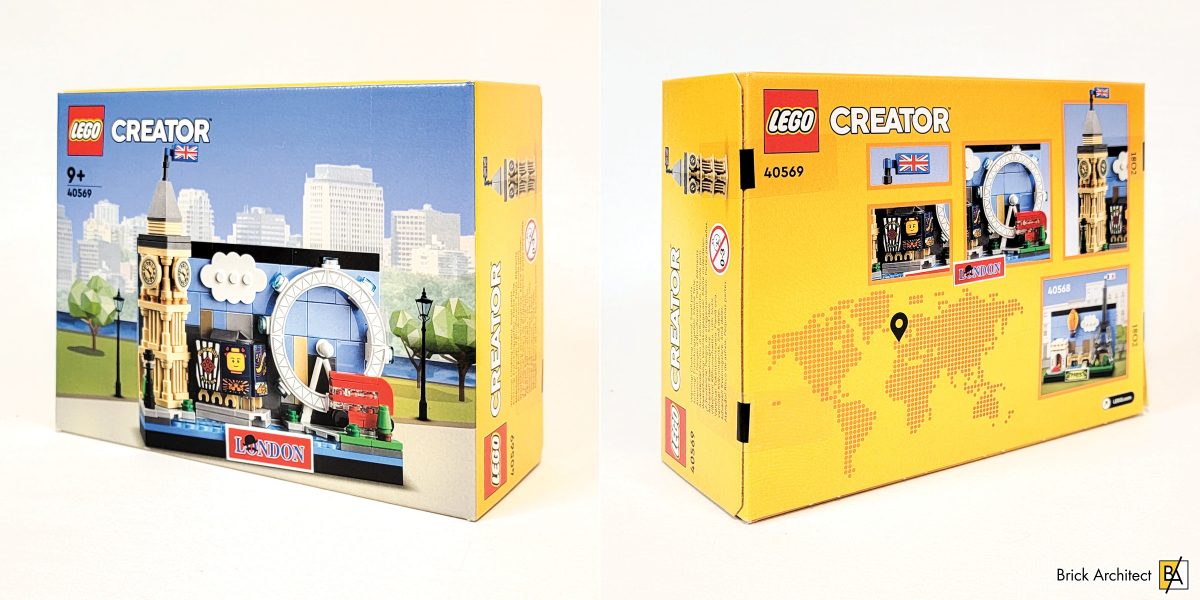 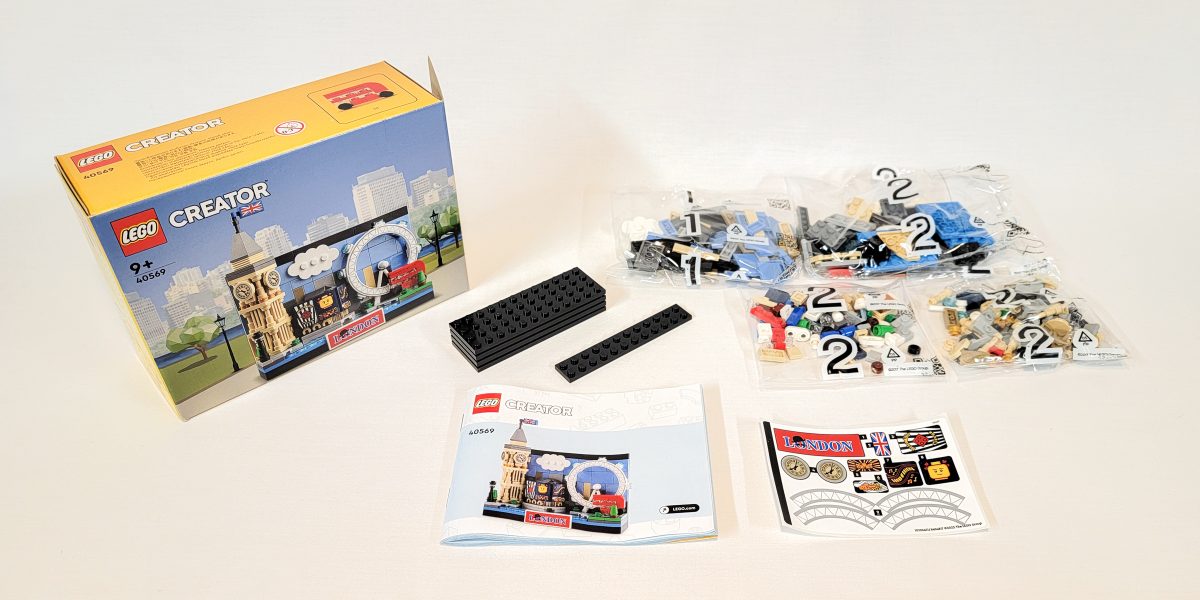 Stage 1 of the London set also has a flat look, but there are more studs on the backdrop than any of the other sets… They will help hold in place the various elements that you need to build in the next stage, including The Eye and the only connection points for Big Ben.

In Stage 2, London bursts forth as the vibrant city that it is. But that’s where reality stops, and iconography begins here as well. It’s clear to most folks the bright red bus, the giant Ferris wheel called The Eye, and the rest of the represented buildings all shout – this is London!

With Paris, the extreme differences in height work to create a proper feeling of the city but let’s crunch the numbers on this one. Big Ben stands a paltry 315’ as compared to the Tower in 40568, and yet it’s actually taller in the set by about 1 plate. Ben is 37 plates tall which means each plate here is equal to 8.5’.

The Eye however, is 443’ tall but come is in only at 22 plates high, meaning a plate there is over 20’ thick! That’s a bit of a difference. Also, Big Ben and The Eye are on opposite sides of the river. Here again, I can understand why they made the size of The Eye and Big Ben the way they did do to the parts we have available. The problem is size differentials like this is it teaches kids the wrong ratios. 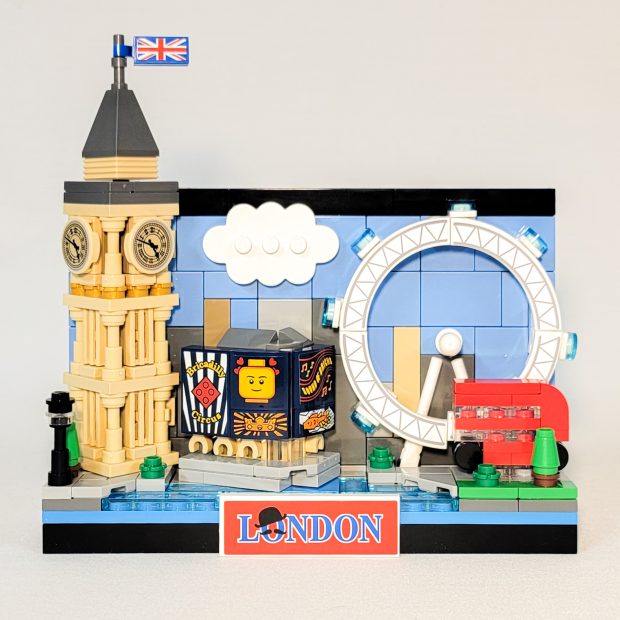 Where it really breaks down though on this set is the streetlight in front of the clock tower, which comes in at a staggering 60’! The real streetlamps here are closer to around 20’ tall. I think in this case seeing as it would be difficult to depict such a small scaled light, it might look better to simply remove it from the scene. Also missing is that old Ben is a part of Westminster Hall, which is not even depicted on the 2d backdrop and is a missed opportunity. The tower itself consists of 5 sections topped with the clock section whereas the build only shows two of these sections but even with just that, it’s clearly still everyone’s favorite timepiece.

I am less thrilled with the London set as compared to gay Paris. Perhaps Piccadilly is something that folks from Britain or the European Union are more familiar with, but for this states side gal, I wouldn’t have a clue what the building was without more information.

Also, while both sets come with a sticker sheet, the London postcard needs extra stickers to make Piccadilly pop, and the stickers for The Eye are impossible to align which negatively affects the overall look. While all the postcard sets come in around 20-23 minutes of build time, the stickers on London delay that by a good deal if you decide to try and to get them aligned correctly. Between the two, I’d jump for the Paris set before I decided on the London set.

I like these sets for what they are, cute representations of a scenic city. They are inexpensive coming in around 7 cents a part and at the $14.99 price point, they are well worth the cost to pick up. 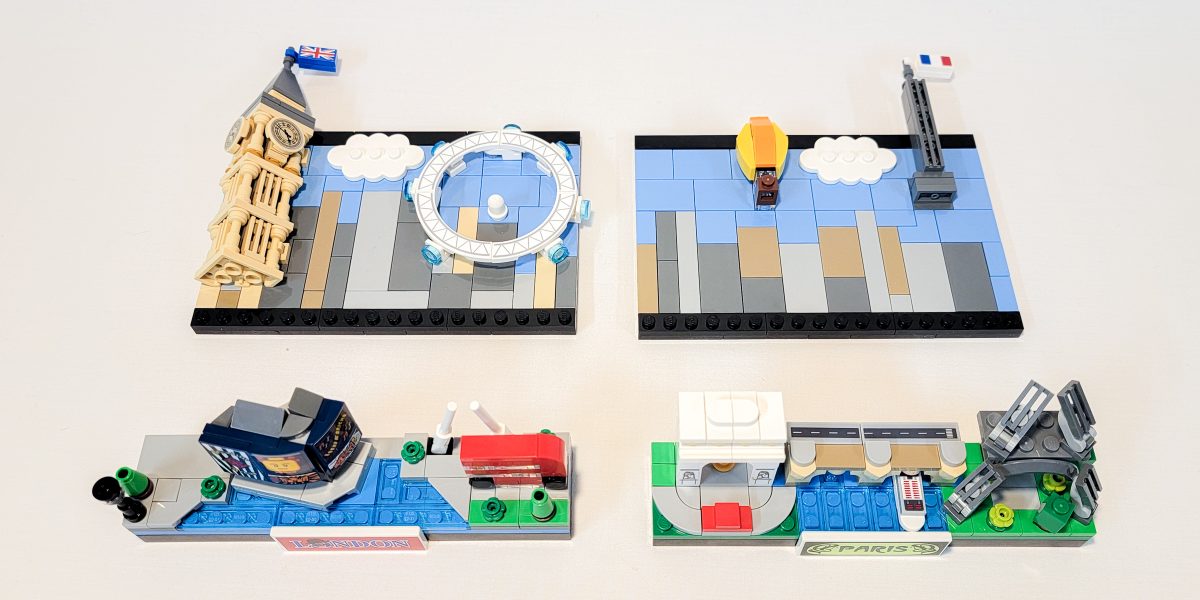 It is also worth noting that these sets offer a good value based both on price-per-part and price-per-gram analysis. #40568 Paris Postcard is just $0.070 per piece / $0.117 per gram. #40569 London Postcard offers an even better value at $0.054 per piece / $0.101 per gram. At well under 10 cents a piece, this looks like a great value, although our price per gram analysis is pretty typical – reflecting the fact that these sets rely on a lot of very small parts.

Are these inexpensive “postcards” growing on you, or do you continue to prefer the higher realism (and higher cost) of the LEGO Archtiecture Skylines? Let us know your thoughts by leaving a comment below!
The LEGO Group provided this set for the purposes of this review. The opinions in this article are strictly my own—providing sets for review does not guarantee a positive review. Photos in this article are by Jeannie Jonas unless otherwise noted. Visit the About page for more info about our journalistic standards and affiliate programs.