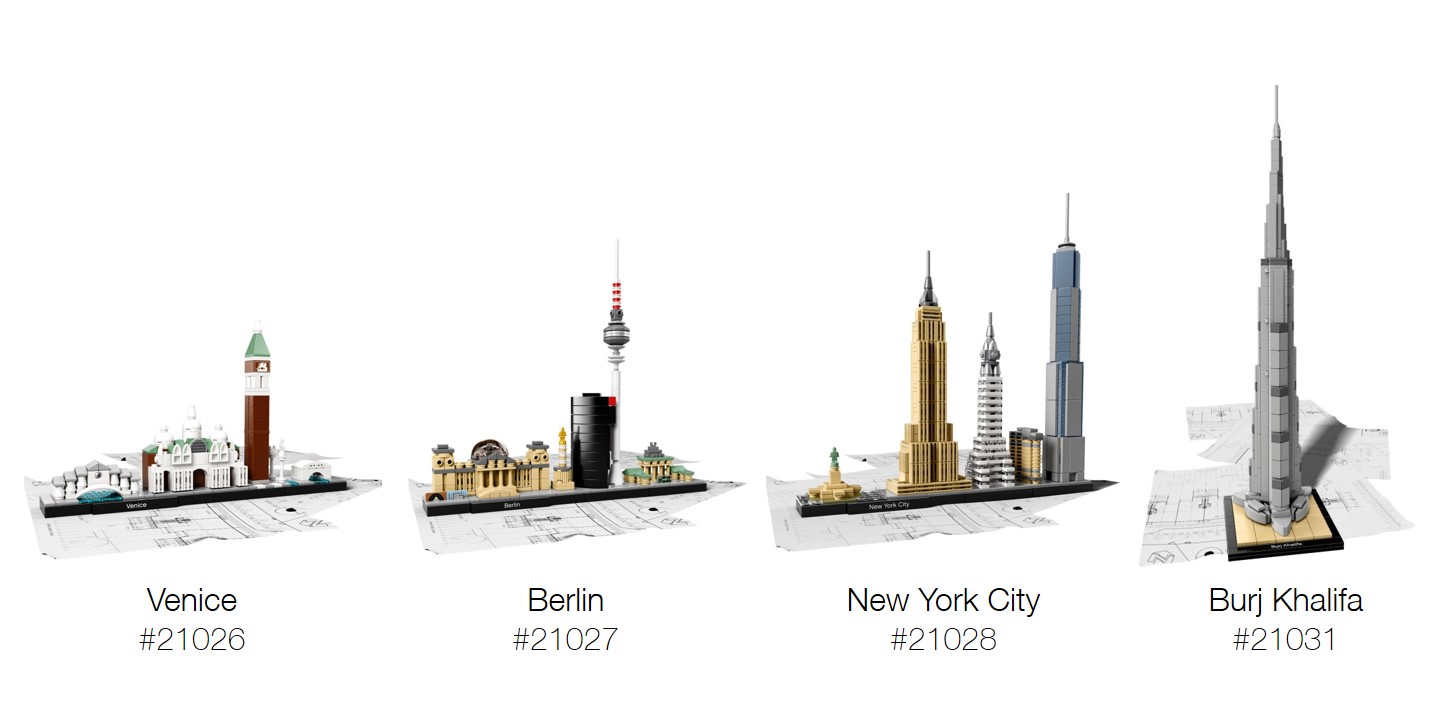 With 2015 winding down, The LEGO Group is preparing the first LEGO sets for 2016. Based on the information I’ve seen online, including this list at brickset.com, it looks like we will see no fewer than 6 new sets in 2016. That’s more than any other year! Not only do we have at least 4 sets to look forward to, we have a new type of LEGO Architecture set. The first three models aren’t a single building at all, but rather whole “cityscapes” including several iconic architectural features! Further, the one large model announced so far is the first remake of an earlier set in the series, a larger and more intricate remake of #21008 – Burj Khalifa.

While a bit confusing, the LEGO Architecture sets released up to this point were officially categorized as either the “Landmarks” or “Architect” series. The Architect Series is comprised of the four Frank Lloyd Wright buildings, Farnsworth House (Mies van der Rohe), Rockefeller Center (Raymond Hood), Villa Savoye (Le Corbusier), and Sydney Opera House (Jorn Utzon). The rest are officially referred to as “Landmarks”.

The 2016 release marks a third designation, “Cityscapes”. The first three cityscapes are Venice, Berlin, and New York. I created the photo above showing the four new sets to scale, so we can see that the Venice and Berlin sets are a little smaller than the New York set, and I expect that they will be a little less expensive.

Venice is one of the most iconic tourist destinations in the world, and it is neat to see it captured in this cute scene. The LEGO Model features three landmarks of the city – The Rialto Bridge, St. Marks Cathedral / St. Marks Campanile (tower), and on the right what looks like the Bridge of Sighs. To be clear, this is not a literal recreation, since all of these landmarks can not be seen from a single vantage point. I think we are looking at a model which is 4 studs deep, 32 studs wide, and 15 bricks tall. Black tiles facing outward are attached to the front, and possibly the back as well, increasing the depth a little. (I’m pretty sure part #99206 is generously employed here.)

P.S. This tiny model of St. Marks Cathedral might be the first “official” LEGO re-creation of a church since 1957. I suspect they decided to allow it, since it is at a ludicrously small scale that it is more accurately a model of the city than any specific building. I hope this is the first example of LEGO loosening this policy, there a lot of interesting churches, mosques, synagogues and other places of worship which would make interesting LEGO Architecture models.

I already built this model using my own LEGO bricks. See a preview at https://www.instagram.com/p/-ek28MjjKD/?taken-by=tomalphin.

I must apologize in admitting that I’ve only visited Berlin once, and more than 15 years ago! That said, this little model is quite nice, despite the aggressively simplified rendition of the Brandenburg Gate (which already has dedicated LEGO Architecture set #21011). From left to right we have: Reichstag (Parliament) building with the transparent dome added in the 1999 remodel by Norman Foster, the Berlin Victory Column, what I think is the Bahn Tower, the Fernsehturm TV Tower, and Brandenburg Gate. I did not take the time to estimate parts quite as precisely, but I think we are still looking at around 250 pieces. (Also 32 studs wide, and 4 deep) I *think* the painted tiles represent sections of the Berlin wall which are still standing. I’m pretty sure it is the back of a 1×2 panel, since they look too thin to be upright tiles.

This is by far the largest of the three cityscapes, with taller models for the skyscrapers. Having visited New York twice in two years, I’m pretty confident that we are seeing the Statue of Liberty, Empire State Building (very similar re-creation to retired set #21002), Chrysler Building, Flatiron Building (also featured in currently available standalone set #21023 – Flatiron building), and the recently completed One WTC building. This one also looks like it is 4 studs deep, and 32 studs wide. It seems like this is the “formula” for a cityscape. I would expect this model to be nearly 300 pieces, and i’m excited to try the build as it has a lot of SNOT work on both One WTC and this updated take on the Empire State Building. (I think we can now understand why the old Empire State building set was retired in October 2014.)

Many of the people share my opinion that the original #21008 Burj Khalifa set was the weakest set in the whole series, both in building technique, and the literal weakness of the model – it falls apart really easily! I’m not going to dwell on this model as I am more excited by the new cityscape sets, but wanted to offer some initial analysis… At 829 meters (almost 1km!), the Burj Khalifa has remained the tallest building in the world since 2009. The LEGO model appears to be on a 12×12 base, and clearly uses hinge plates and a lot of SNOT techniques to achieve the building’s unusual triangular form. I like that the designer included darker gray to signify the five darker bands in the real building. I should be honest and say that the real building’s architecture does not excite me, and neither does the LEGO model, but the LEGO model is cleverly designed and looks liek it will be a lot of fun to build.

I like how much more colorful a scene containing several buildings is than a single monochromatic building, but my overall response to the new Cityscapes line is mixed. On the one hand, I think the models will be very approachable and drive interest in the LEGO Architecture line, but on the other hand the models are fairly simplistic and are less focused on “Architecture” per-se, and more focused on the appearance of buildings in a broader scene. Logically, I understand that respect for neighboring buildings and surrounding city is critical in a building’s success, and this is often overlooked in the design of buildings, but I would be disappointed if the Cityscapes series was the future of the LEGO Architecture product line.

Thankfully, we have at least one new “large” LEGO Architecture set to look forward to, the remake of the Burj Khalifa, and the home of two more models in the series.

I created this table to show that the LEGO Architecture series is as strong as ever!