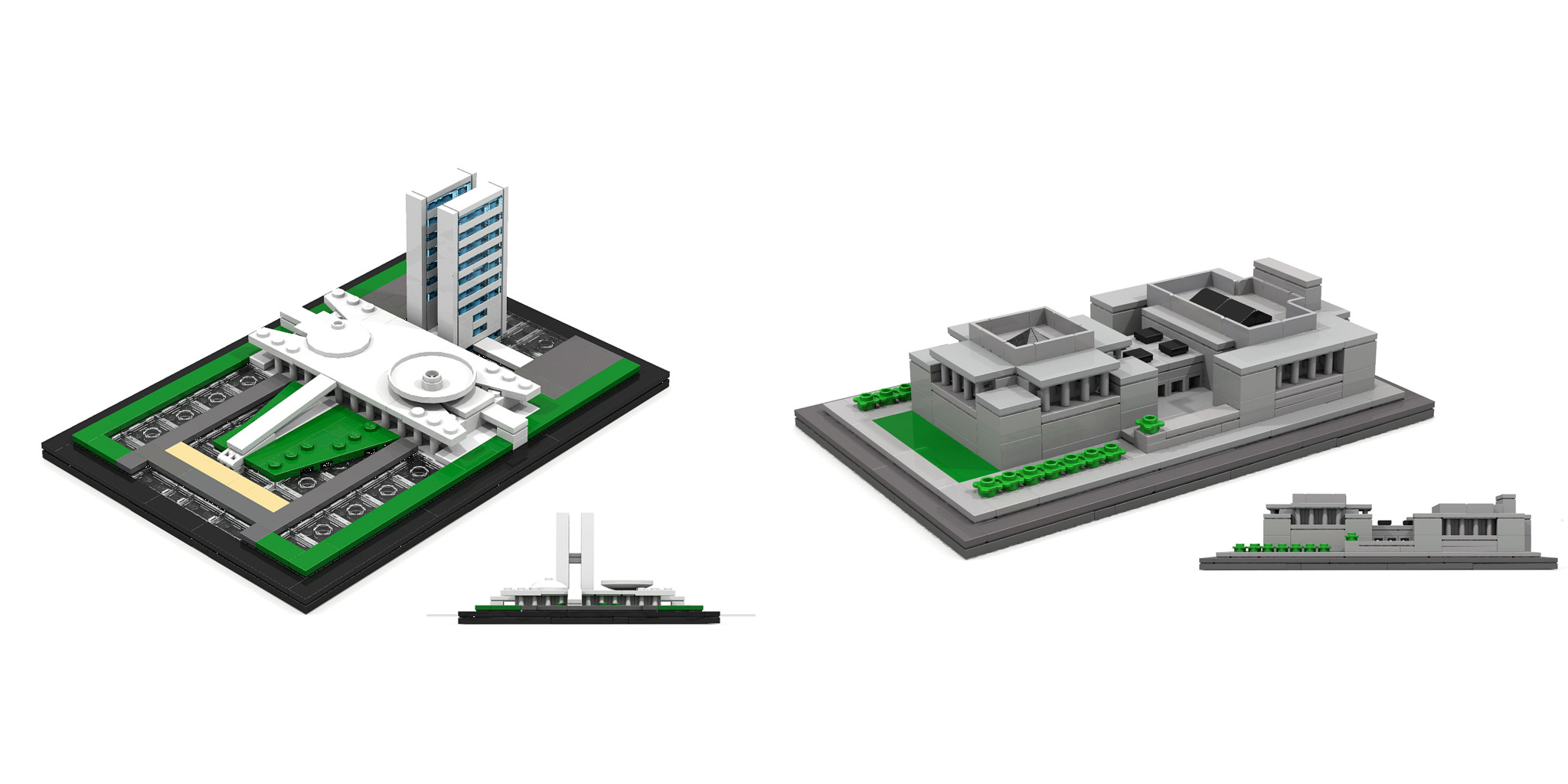 Let’s meet Paul Wellington, whose model of the National Congress of Brazil by architect Oscar Niemeyer is featured in my book ‘The LEGO Architect’. We will also learn about his excellent microscale rendition of Frank Lloyd Wright’s Unity Temple.

My upcoming book The LEGO Architect includes 50 different LEGO models by 38 different LEGO artists. I’m excited to talk with many of the artists featured in the book and share their stories here. The first artist is Paul Wellington, whose model of the National Congress of Brazil by architect Oscar Niemeyer is featured on page 78. I also wanted to feature his excellent new microscale rendition of Frank Lloyd Wright’s Unity Temple. I asked Paul to tell me more about his model:

The scale of the National Congress of Brazil model is solely based on the sides of the towers, which use 1×8 tiles. I wanted to maximize the number of windows (trans-light blue plates) therefore the tiles could only be connected in one place. The original model was completed in November 2013. The updated model, completed in January 2015, features more coherent towers and a variety of color. The first model took several attempts to design while the updated version took only a few hours.

The designing of the model heavily relied upon Google Maps and exterior images of the National Congress of Brazil. Besides choosing the scale, the most difficult part was designing the landscape. I spent a couple of hours just thinking of different possibilities. Though I wanted to use all tiles, I have to settle for wedge plates (that’s why I would love wedge tiles).

It was a pleasure to feature this intricate, small-scale model in the book. I especially appreciate when LEGO builders can capture a buildings essence with an economy of parts. Unity Temple was conceived by utilizing 2×2 medium stone gray bricks as the corners of the building. Next I imagined creating the columns out of 1×1 bricks with handles. Everything after that essentially fell into place. Unity Temple is now the first building in Brick City Scenes, and is one of the few designs to be modeled both physically and digitally. Ironically my favorite elements of the building are the plants, which provide contrast and detail to a relatively gray palette. Paul also built his Unity Temple design out of real bricks, and hid a small minifig-scale scene based on the real building in the base.

Paul is a talented LEGO artist with a focus on microscale architecture. He is probably best know for his fictional microscale “Brickville” and “Brick City” cityscapes, but he also creates LEGO models of real buildings.

Paul has gone through four main phases of building LEGO architecture: He started off working in Minifigure scale. In 2005, he began building microscale cityscapes, culminating in his “brickville” project from 2010-2014. Brickville was a very small scale city, focusing more on “form rather than detail. Since the scale was so small I was limited in my variety of designs.”

In 2014, he tore down Brickville in favor of a new project, “Brick City, which is about double the scale. The jump in scale allowed me to focus more on detail; which is even more apparent in Brick City Scenes.” His most recent project is what he calls “Brick City Scenes”. In this project, his focus is the creation of intricate microscale creations of real buildings, which minifig scale vignettes hidden in the base. The Unity temple model (featured above) is part of this project.

Paul explained that “While I strive for detail, form is still a very important aspect for me.” I asked him to tell me more about how scale factors into his models:

Back in 2005 I was still building in Minifig scale. I wanted to build a white house but did not have enough bricks in that color. In a moment that would define by building preference, I did the unthinkable and spray painted both the inner and outer walls of the home. The house lasted about a week, but there were other things I wanted to build. Since all I had were white bricks, I was severely limited in building options. Coincidentally this was around the time the Skyline (5526) set was released. I realized the potential for using plates and a limited number of bricks in designing buildings. Ever since then I have built in microscale.

With the rare exception I find it difficult to build anything outside of microscale. I don’t plan on ever returning to Minifig scale, though I recently have shown an interest in vignettes. Brick City Scenes continues to utilize my passion for architecture but allows Minifigs to become part of more detailed scenes.

Paul’s model of the National Congress of Brazil has the unique distinction of being the only 3D model featured in the book – all of the other models in the book were photographs. I asked Paul to explain how he uses 3D modeling in his design process:

Until recently Brick City utilized most pieces in my LEGO collection. Occasionally I have the urge to design actual buildings in microscale, yet I never have any available pieces. This is where CAD programs, such as LDD (Lego Digital Designer), comes in. While it is nice to have an unlimited parts selection in digital programs, I generally prefer a physical model. Some of my buildings have connections that are not possible in such programs. As far as deciding what buildings to model, is really is just whatever comes to mind. I can envision myself designing it in microscale then I will build it.

Currently I use LDD to POV-ray, a program that takes LDD models and renders them at a high quality. Depending on the building I sometimes also use Photoshop for added effects.

Dealing with the limits of LEGO

The LEGO system as an artistic medium has some inherent limits – there are only so many different LEGO elements, and there are a limited set of colors. I asked Paul if this limits his creativity:

For the most part I don’t have a problem with the selection of LEGO, just deciding what to build. I like to come up with new uses for pieces, as I rather focus on what LEGO does have rather than don’t. Some of my favorite and most commonly used pieces include headlight bricks, cheese slopes (1x1x2/3 slopes) and brackets. Using just these three parts alone I can create numerous designs from LEGO.

Some of Paul’s dream parts include 1×1 Grille, 1×1 Door Rail, Triangular tiles, and 1×1 brick with studs on 2 adjacent sides.

That said, I also asked Paul for his lost of “Dream Parts” that LEGO does not make. He was quick to provide this short list of parts which any LEGO Architecture builder is likely to agree with :

Thanks again to Paul Wellington for allowing me to share photos of his LEGO creations and his story here at brickarchitect.com