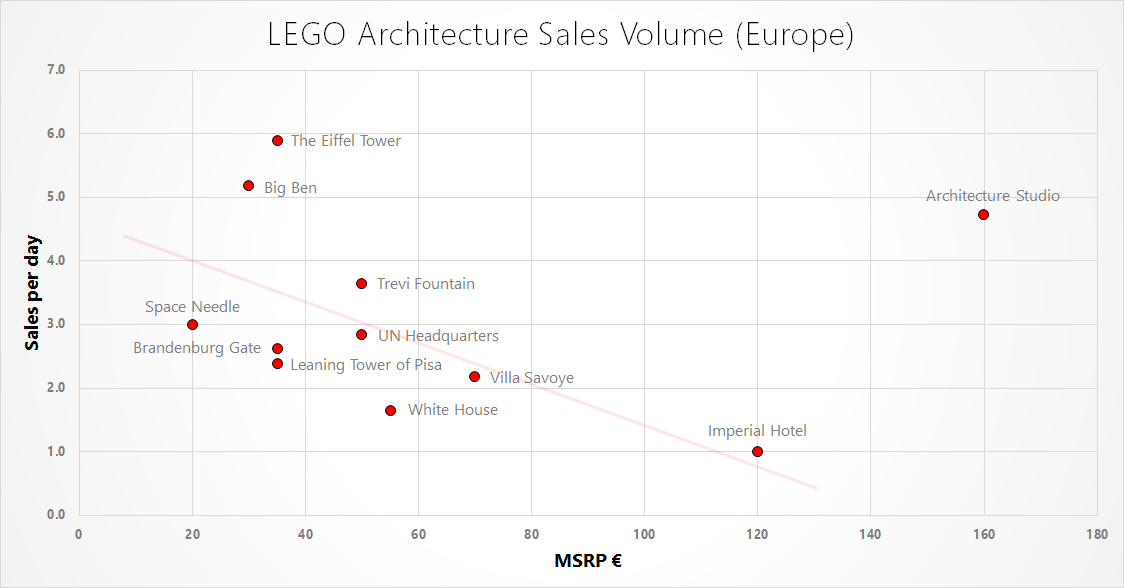 Can we estimate the popularity of different LEGO sets by analyzing inventory data over time? Let’s try, and see what we learn!

For reasons that are completely unclear to me, it seems like the LEGO Group has decided to make a lot of information about sales in the European market public. In the past, they have exposed availability information to 3rd parties like brickset.com website, but they have expanded this information to giveinformation on the quantity of units in stock each day. Inventory of 21050: Architecture Studio through LEGO Shop in Europe. (Image from brickset.com)

While it would be really difficult to extrapolate global sales trends from this data, it does serve as an interesting way to learn about the relative popularity of the various sets in the LEGO Architecture series. It is a little tricky to parse, because we do not know why inventory went up or down on any given day. Restocking events are pretty clearly visible in the data, but it is also possible that a sudden drop in inventory is due to relocating of inventory to a different retail environment instead of large sales on a given day.

Hypothesis: I predict lower sales of the large sets (over 500 pcs), lower sales of less famous buildings, and higher sales of those buildings located within Europe. I don’t have a good idea how well Architecture Studio will sell compared to the other sets in the series, but given that I’m writing a book which complements the set well, I hope it is a top seller!

I’ve removed the outlying data that looks like restocking or moving inventory, and here is the resulting data…

As expected, models outside of Europe aren’t selling well in that region. The expensive and relatively unknown Imperial Hotel is the lowest seller in terms of units, with just 1 unit/day. The White House is a poor seller in Europe. This is also probably exacerbated by the fact that the set has been available since 2010. I expect the Space needle only reaches the middle of the pack in terms of units sold since it is by far the least expensive set currently available. The outlier is the UN Headquarters set, which is selling quite well in Europe. I suspect this is due to excellent part selection and a low price/part, but it also may relate to the international nature of the building.

Not unexpectedly, the Eiffel Tower, Big Ben, and Trevi Fountain sets are also doing very well. While a low volume, Villa Savoye sells better than I would have expected, since it isn’t a widely known building (at least here in the US). I am sure that the LEGO Group is intimately aware of this type of data, and is using it to inform product development. It was interesting to see that the higher-cost sets really are selling well enough to bring in similar daily sales to the smaller sets which move more volume. I am not terribly surprised to see which sets are selling the best and the worst in that geography.

This does bode extremely well for the future of the Architecture Studio set. It’s amazing that it is selling in similar volume to sets that cost 1/5 the price!

I hope you have found this analysis interesting. What do you see in the data? Leave a comment below!