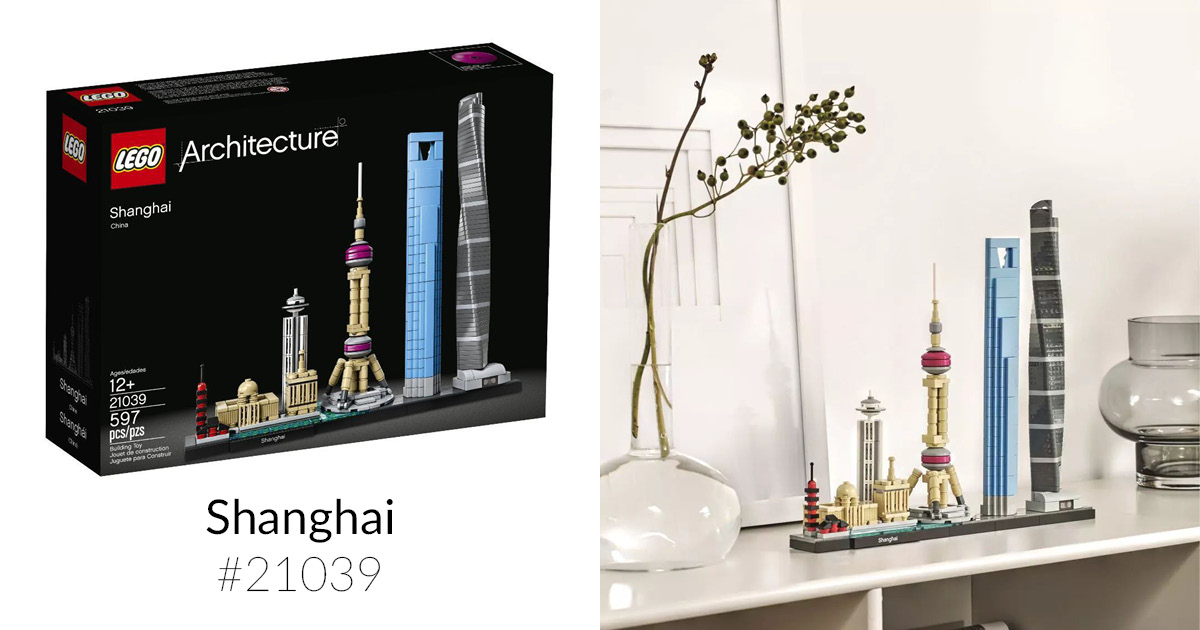 See some of the new parts and building techniques in upcoming LEGO Architecture set #21039 – Shanghai Skyline.

Several months ago, we learned that there would be two additions to the LEGO Architecture Skylines series in 2018: Shanghai and Las Vegas. We don’t have official photos of the Las Vegas model yet, but #21039 Shanghai Skyline was recently announced! Unless you happen to live in Shanghai (where it will be available starting December 2), the set will be sold in stores around the world on January 1, 2018. At first glance, this is a nice looking model which includes several well-known buildings that are immediately recognizable. I have not had the pleasure to visit Shanghai yet, but it feels like a good variety of buildings given my limited familiarity with the city. I look forward to hearing from peopel who live in Shanghai, or have visited several times! Highlighting some of the parts which are probably used in this model.

Want labels like these?
You can download and print the labels used in this image to organize your LEGO collection. LEGO Brick Labels contains over 1000 labels for most LEGO bricks!

I wanted to call out some of the less common LEGO colors used in this model to make the model really stand out. The brightly colored spheres on the Oriental Pearl TV tower appear to be created using 3×3 Dishes in ‘124. Bright Reddish Violet’ (BL: Magenta). I’m pretty sure that the Shanghai World Financial Center uses ‘212. Light Royal Blue’ (BL: Bright Light Blue). I expect we will see several parts appear for the first time in this color.

While I haven’t had a chance to build the model yet, I analyzed the photos and highlighted some of the interesting parts usage. The Shanghai Tower is clearly made by stacking Technic Thin Liftarms. (You can tell because Thin Technic liftarms are 1/4 thicker than a regular LEGO plate.) Flex tube along with additional parts going through the center of the tower are probably used to achieve the gently twisted shape. Further, it would be a missed opportunity to not use the new #34403 Double Jumper on the Shanghai World Financial Tower building. (This would be only the second color in that new part.)

While it’s hard to predict the exact baseplate design without using the instructions, I was able to count the number of studs on the base, and it looks like it has the same 36-stud with as the #21034 London set. (Most of the other Skylines have a width of 32 studs.) Minor errors on the box photos.

Lastly, I noticed yet another error on the photo on the cover of the box. There is definitely a discrepancy between the box cover and the other photos released so far. On the box, the stack of 1×2 round bricks changes orientation in the middle, but in the sample photos, all four have the same orientation. Either they made a mistake while assembling the model for press photos, or more likely, the photo on the cover includes some minor errors which were addressed just before finishing the instructions and releasing the set. (I noticed a similar inconsistency in another recent set – #21036 — Arc De Triomphe.)

I’m, pretty excited, but what do you think… Will you be buying it on January 1st?