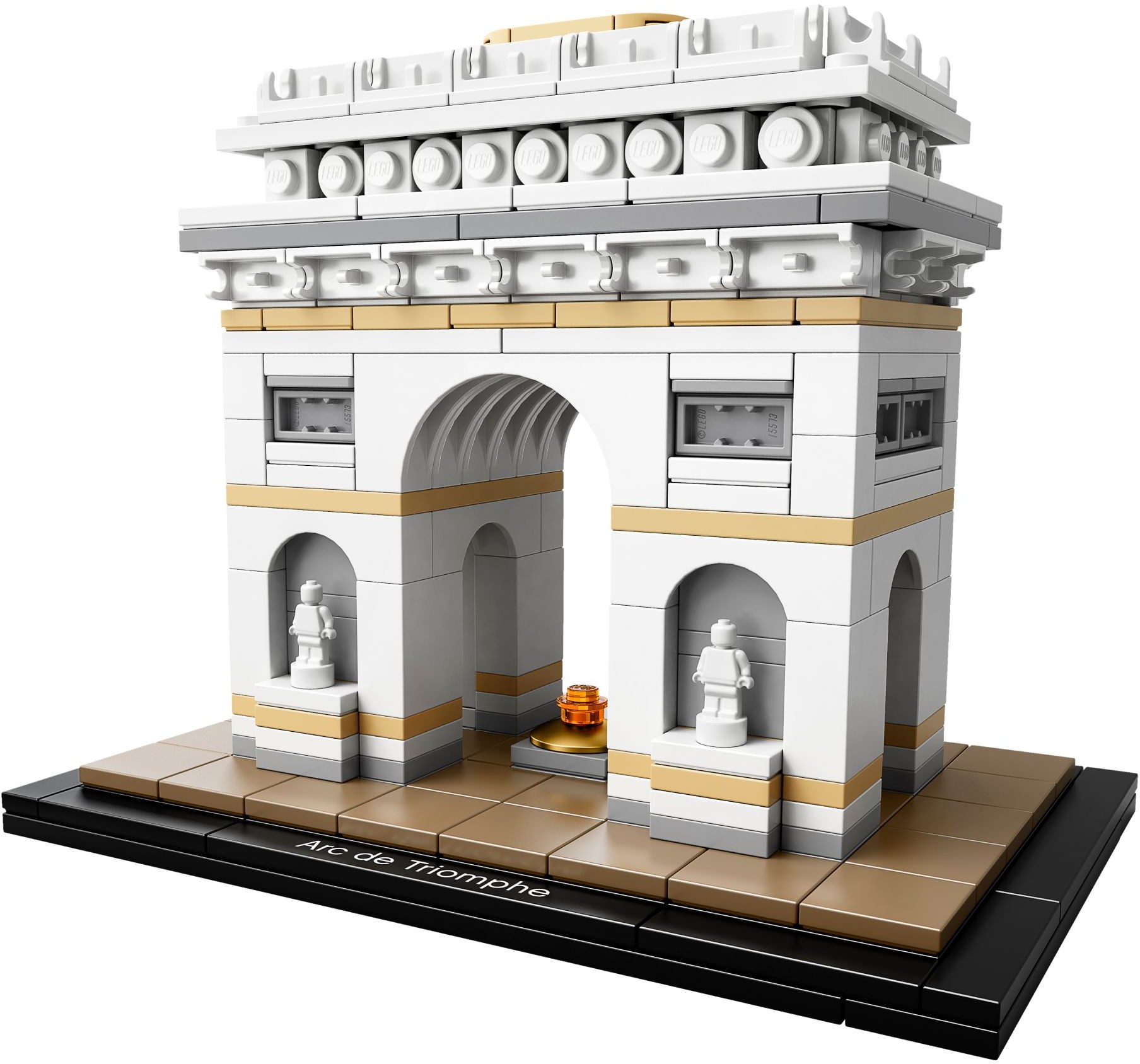 Paris is one of the most popular cities to visit, so it’s no big surprise that the latest addition to the LEGO Architecture series is the Arc de Triomphe. Let’s take a detailed look at the set and see how it stacks up.

November 7, 2018: Brick Architect now includes numeric ratings. The original review did not have a rating, a few sentences were changed to add a rating for this set.

NOTE: While I’ve tried to approach this review with an open mind, my initial impression when the set was first announced was not very positive. I wasn’t alone; other fans of the LEGO Architecture series agreed that the model should have been a little larger, allowing it to be a lot more detailed. The Arc de Triomphe is one of the most famous landmarks in Paris besides the Eiffel Tower (which has already been captured by a model in the LEGO Architecture series.) It isn’t designed to be a functional building; it’s in the tradition of “triumphal arches,” a type of monument following in the Roman tradition of massive ornamental archways to commemorate famous people or events. They were often built spanning across a major roadway, making them prominent landmarks in each city. The Arc de Triomphe was built between 1806 and 1836, commemorating those who died in the Napoleonic wars and French Revolution. The eternal flame to the unknown soldier was added in 1920, following World War I. The building was designed by Jean Chalgrin and Louis-Étienne Héricart de Thury in a “Neoclassical” style. (The Neoclassical style describes buildings built in this period which were designed to follow the guidelines established by ancient Greek and Roman architects such as Vitruvis.)

The first stage of the building process is the same as every other set in the Architecture series; you assemble the base using black plates, black tiles, and put the custom printed tile in the middle. Rather than following the instructions right away, I like to reverse-engineer as much of the design that I can using only the photo on the front of the box. The base is assembled using basic plates and tiles.

Without using the instructions, I was able to assemble the base, the main design for the arches, and the statues. I also figured out how to construct the first of two levels of cornices below the roofline before consulting the instructions. As you can see, the building’s overall shape starts to take form once you assemble the two bays of arches. It was easy to assemble the two sections of archways based on the photo.

One of the reasons that I had to consult the instructions so quickly was due to an error in the photo on the front of the box — it should have included a layer of gray plate which was missing in the photo. There is a missing gray plate in the photo on the cover.

This issue is also reflected in the instructions, which are correct for all three corners except the back-left corner. The instructions also have an error. Notice that the identical module appears on the left without the bottom-most gray plate.

Once I consulted the instructions, I finished creating the building’s foundation using plates and jumpers. The 1/2 stud offset for the statues is clever, but easy to assemble. The two layers of archway assemble quickly, leaving you with about 1/2 of the pieces remaining for the buildings staggered roof and detailed cornices. The cornices are attached with SNOT Techniques and hidden blue bricks.

The model relies heavily on using the bottom half of the 1×2 hinge part to re-create moulding. It is reasonably effective, although I prefer other techniques as this approach looks a bit too rough for my tastes. We also see a row of alternating 1×1 square and round plates which I think works pretty well in re-creating the shield and sword pattern of the building. The SNOT Techniques used to achieve the roof section are clever and hard to guess without using the instructions. I was able to figure out the lower part of the roof on my own, but not the top section.

The finished model has reasonably realistic proportions: Matching the real building, the central archway is about 1/3 of the model’s’s width, and the model’s height is about the same as it’s width. The model also includes simple details which are representative of the buildings critical design details such as the four main sculptured panels, the smaller panels above them, and intricately detailed cornices. It’s easy to see why this scale was chosen, since there are only a few different arch sizes within the LEGO system of parts. Unfortunately, I can’t shake my initial impressions — It’s one of my least favorite models in the series. I’ve tried to explain what I think went wrong using clear architectural terms…

In architecture, “Form” describes the broader shapes of a building; the primary shapes you might still see if you squinted at the building. In the case of the Arc di Triomphe we have a very simple primary form, a rectangular block with a big arch cut out of the middle across the longer side, and a smaller archway cut out of the middle along the smaller side. The building’s most basic form is easily captured using just three LEGO bricks and it remains fairly recognizable.

In the case of Neoclassical architecture and many other styles, the building’s form is complemented with a layer of “applied ornamentation”. These are the smaller details that you might not notice from very far away, but make the building more interesting when you step closer. The Arc de Triomphe may have a very simple primary form, but it has a lot of applied ornamentation. This includes roofline with it’s double cornices, and the various carved panels on each side. If you went underneath the arch, you would also notice additional details like the ribbed vaulted ceiling, and the names carved on the walls.

The set contains 386 pieces for a price of 39.99$. Recent sets in the Architecture series have had a price of less than 0.10$ per piece, so this set feels a bit overpriced. It doesn’t include any particularly large parts to justify the price, and I don’t think it includes any rare or expensive parts either.

Ultimately, I believe that the model is not as strong as it could have been due to the scale chosen for the model. If the model were much smaller, I wouldn’t be looking for elaborate applied ornamentation as it is not practical at that scale. If the model was a bit larger, it would have been easier to include a lot more sculptural detailing, better capturing both aspects of the buildings design. At least it comes in a nice box!

Unfortunately, not only is this one of my least favorite recent additions to the series, but it is not a great source for parts either. The price per part is high, and the set includes a lot of incomplete hinges which are not especially useful in creating other models. For these reasons, the set earned our ‘Acceptable’ (2/5 star) rating.

Unless you love Paris, or have every set in the LEGO Architecture series, I would strongly suggest that you try the Eiffel Tower, Louvre, US Capitol Building, or any set in the Skylines series before buying this set.

What’s your impression of 20136 – Arc de Triomphe? Leave a comment below with your thoughts. I’d also love to hear what you think of the review, the bug in the instructions that I discovered, or the assembly video.
If you decide to purchase a LEGO Architecture Set such as 20136 – Arc de Triomphe, please consider using these referral links. It helps.