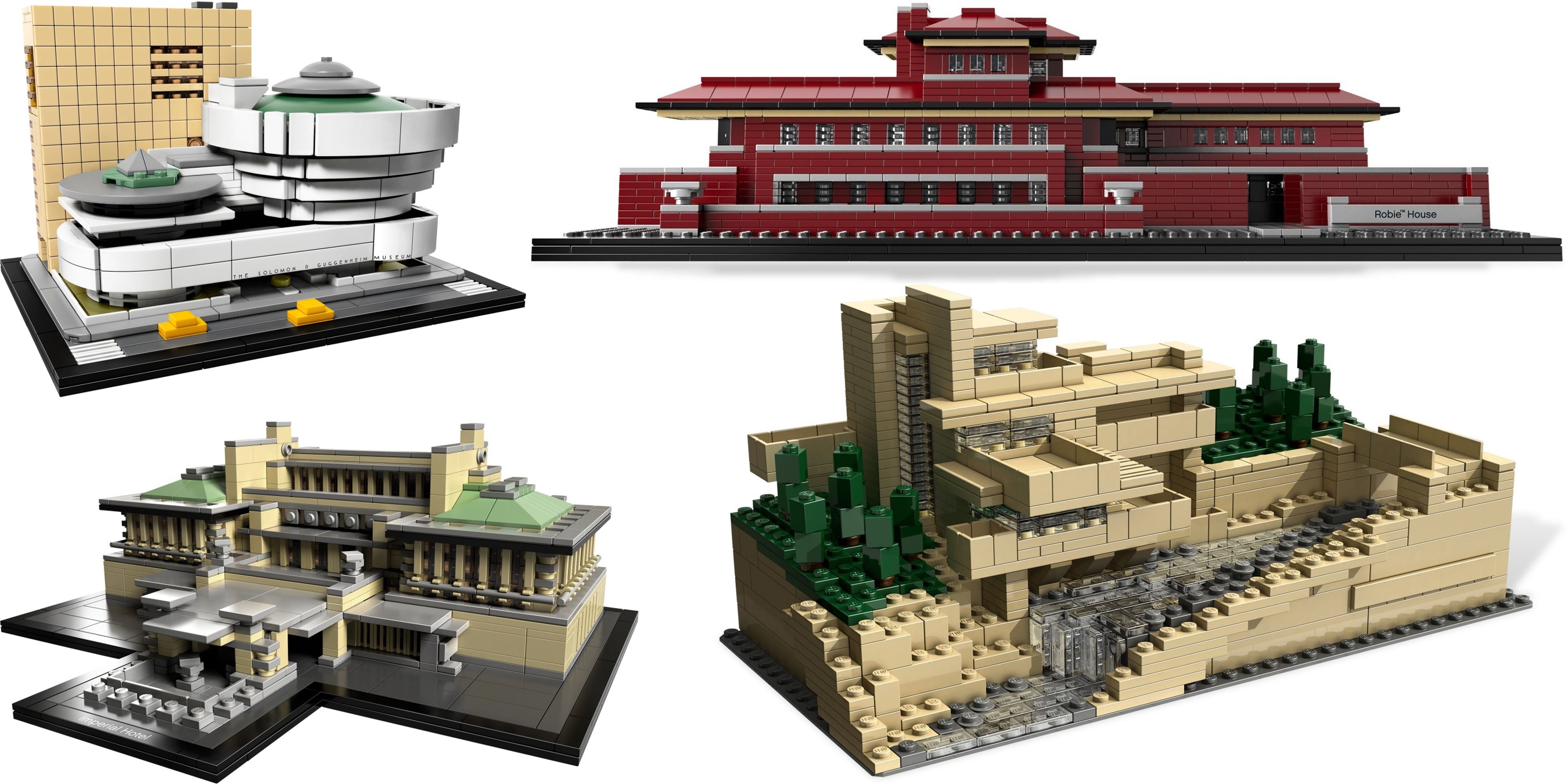 150 years ago, the greatest American architect was born. Let’s explore Frank Lloyd Wright’s life and legacy using LEGO bricks. We will look at the 5 official LEGO Sets, and creations by other LEGO artists.

Frank Lloyd Wright was born in a small farming village in Wisconsin. Growing up in a struggling family, one of the few constants in Wright’s young life was his mother’s conviction that he would grow up and become a great architect. His family moved a lot since his father was a Baptist Minister: to Massachusetts; to Spring Green, Wisconsin; finally settling in Madison, Wisconsin. Wright’s prairie upbringing would later be expressed as a whole new style of architecture. While Wright is widely regarded as the inventor of the Prairie style, his later projects contributed to a wide range of styles including Modernism and Brutalism.

At 19 years old, Wright started taking classes at the University of Madison – Wisconsin; he left after just two years with no degree as he was ready to begin his career in architecture by moving to Chicago. Undeterred, he quickly found work as a draftsman in the office of architect Joseph Lyman Silsbee. Just a few years (and a few jobs) later, he demanded employment as a draftsman at the most respected firm in town, Adler & Sullivan. The firm was pushing the limits of architecture in this period, which exposed Wright to new techniques such as curtain-wall construction. The firm also showed a willingness to explore designs with slightly less applied ornamentation. This is where Wright refined his craft as a draftsman and began developing concepts for a new residential style of architecture. Instructions to build a Sullivanesque Building. From my book, The LEGO Architect.

True to form, Wright wanted more, so he started moonlighting by designing homes for affluent clients in the Chicago suburbs. The first of these homes (the “bootleg” homes) were just streamlined interpretations of popular architectural styles such as the Queen Anne style. Nonetheless, this is where he began a lifelong quest to discard superficial decoration began. (Arguably, the way he reduced ornamentation in his bootleg homes mirrors the efforts of the much later Postmodern era.)

After being fired by Louis Sullivan, Wright’s career as an independent architect began. He moved to Oak Park with his wife and young kids, and built a beautiful home which allowed him to experiment with some of his new ideas. This is where the defining aspects of his Prairie Style emerged: A relatively flat roof, long overhanging eaves, beautiful art glass windows, and the overall horizontal emphasis (that he believed reflected on the vast open spaces of the American West). Of all of Wright’s Prairie style homes, the Robie House is usually cited as his masterwork. Due to the strong horizontal emphasis in the design, the home appears to be a reasonable size, but it is actually a massive 9,062 square feet (841.9 m2). The exterior feature absolutely perfect brickwork, but it is the interior which really shows off with: beautiful Stained Glass, intricate woodworking, and custom furniture designed specifically for the home.

Robie House, 1910. With no fewer than 2276 pieces, LEGO set #21010 expertly captures the horizontal feel of one of Wright’s later Prairie style Masterpieces.

Unfortunately, A combination of a scandalous personal life and changing styles caused Wright’s Prairie style to fall out of favor in the United states by around 1914. Wright found a few commissions in Southern California where he explored the use of “Textile Blocks” (richly decorated concrete blocks) which can be stacked like LEGO bricks to build a large home such as Ennis House (1923). Unfortunately, none of his Textile Block homes have been re-created in LEGO yet. Imperial Hotel, 1923, Tokyo, Japan. The central portion of this immense hotel is captured in this LEGO set with 1188 pieces.

Wright also went on to build a number of projects in Japan, including a few residential projects, and the massive Imperial Hotel complex in Tokyo. The building famously withstood both a huge earthquake a few months after it’s completion and the great fire that ensued. While it received a lot of attention when it was built, the building slowly feel into disrepair and most of it was destroyed in 1967. (The central building was preserved by disassembling it and moving it to a new location.)

While Wright’s Prairie style is still celebrated today, it had fallen out of favor by the 1920’s as attention shifted first to Art Deco, then to Modernism. Wright finally found the perfect client in Edgar J. Kaufmann, a department store owner from Pittsburgh, Pennsylvania. Kaufmann offered Wright an quiet forested building site with a waterfall, and was crazy enough to allow Wright to build the home right on top of the waterfall. The triumphant result was Fallingwater, one of the most elegant homes in the world. Architecturally, Fallingwater is not in the Prairie tradition; it combines the architectural simplicity of Modernism with the comfortable, open-plan interior spaces he had perfected while designing Prairie-style homes. Fallingwater, 1937. Captured in the first large model in the Architecture series, Fallingwater is a really unique model as you can take it apart to see the various floors.

Fallingwater received overwhelmingly positive press, which helped Wright re-enter the architectural mainstream. This kick-started the most productive period of his career, creating countless designs exploring a wide variety of new materials and forms. In addition to client work, this period began a long period of architectural experimentation at Taliesin West, his winter home and studio in Arizona. Wright’s latter works deviated from the sterile rectangular prisms embraced by the International Style of Modernism. His buildings are very geometrical, employing triangles, circles, or spirals to give rhythm and visual interest. This mirrors themes in Modern Art, especially Geometric Abstraction. Solomon R. Guggenheim Museum, 1959, New York City. Captured in not just one, but two official LEGO Sets, the Guggenheim is a masterpiece in Wright’s late career. The Concrete construction and curvaceous form are a precursor to Brutalism.

While it wasn’t has last project, Wright’s final masterpiece was undoubtedly the Guggenheim Museum in New York. Wright envisioned a whole new type of museum, placing the art collection into a massive spiral, allowing visitors to take an elevator to the top of the spiral, and ensuring that museum visitors would experience the exhibit in the order that the curators had intended. The linear presentation is perfect for the museum’s charter – visiting exhibitions are often retrospectives of a single style or artist, which can be ordered chronologically to help viewers follow the story. While large concrete buildings became common with the Brutalism style by the late 1960’s, Frank Lloyd Wright was well ahead of his time with this design.

At the same time that Wright’s larger commissions explored a range of expressive forms, from the simple beauty of Fallingwater, to the angular forms at Taliesin West, and the simple curves in the Guggenheim, he also wanted to reinvent mainstream domestic architecture.

Having had now the experience going with the building of seven hundred and sixty-nine buildings, it’s quite easy for me to shake them out of my sleeve, and it’s amazing what I could do for this country.

By the 1930’s, Wright didn’t just design buildings from scratch, he established a system to create beautiful homes based on a unique building site, and needs of the family. Wright gave this system to create beautiful American homes a catchy name — Usonia. The system was based on simple grids (typically square, rectangular, or triangular) that he could adapt to a given project.

Wright used his deep understanding of modern living, and his Usonian system to quickly create drawings for a client. He was skilled at understanding how to optimize the design for a home site to factor in the angle of the sun, seasonal changes, and interesting landscape features. In some cases, he did this without visiting the site at all, using just a site plan instead. Many homes (including some which were fairly modest) were built all over the Untied States based on his Usonian system. Two years before his death, Wright was famously quoted that “If I had another fifteen years to work I could rebuild this entire country, I could change the nation.” Beyond the egotistical nature of this comment is the truth that he had spent most of his career designing homes for the American people, and in a way he did rebuild America — The classic “ranch” style home owes a huge debt to the work of Frank Lloyd Wright.

It’s hard to decide if Frank Lloyd Wright should be celebrated most for inventing the Prairie style, designing Fallingwater, or contributing the architectural styles that followed. Either way, I hope you enjoyed this exploration of Wright’s work and Legacy.

I tried to keep this article fairly short, but may readers may want to learn more about Frank Lloyd Wright or the Prairie style.

Did you learn something? Have you built a LEGO model of a different Wright building? — Please leave a comment below!
If you decide to purchase one of the official Frank Lloyd Wright LEGO Sets, please consider using these referral links. It helps.