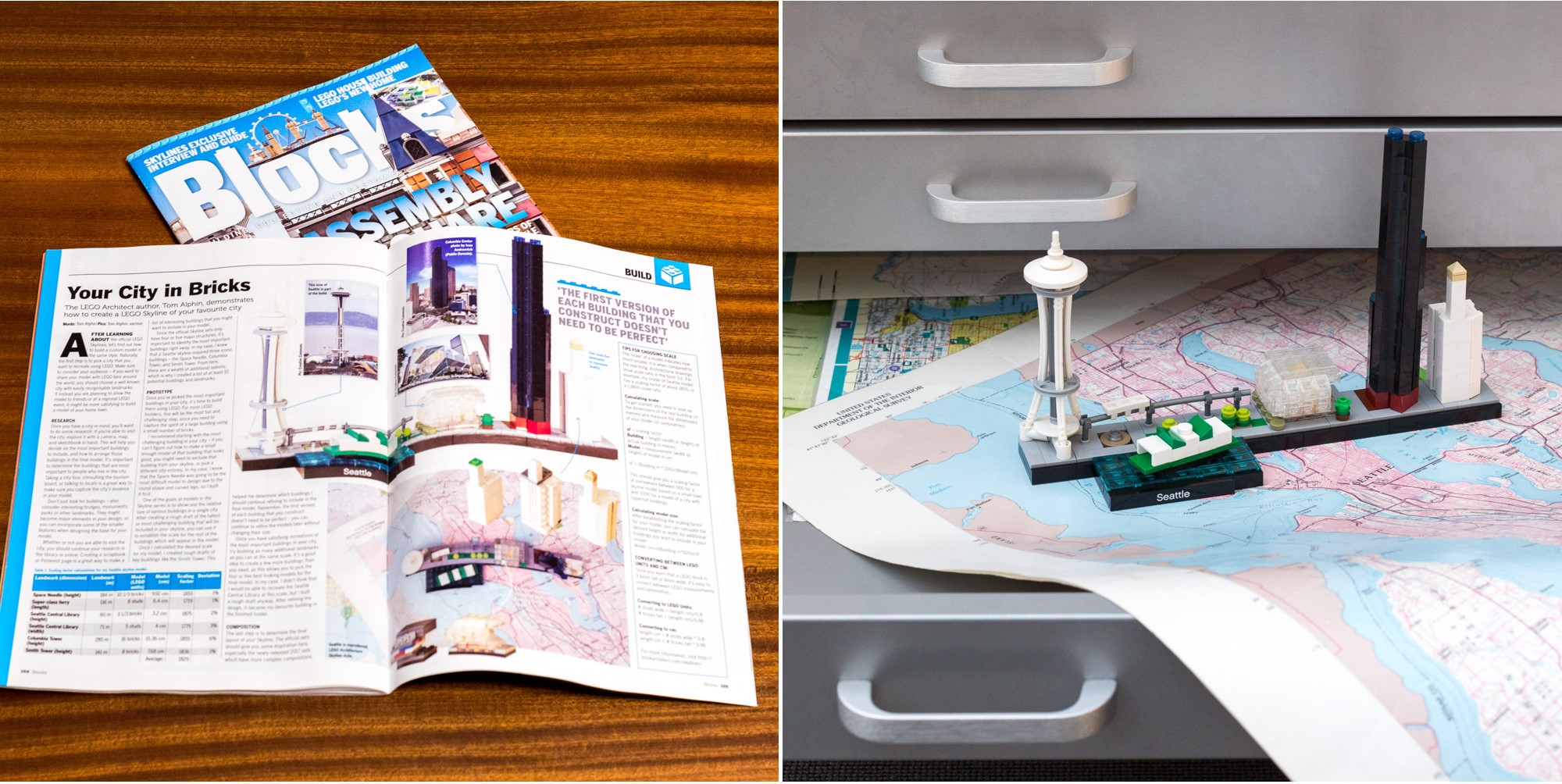 Learn more about the LEGO Skyline series in Issue #30 of Blocks Magazine. I wrote three articles which teach you how to build your own LEGO Skyline.

Tom Alphin
·
Interviews · MOCs · Skylines
The latest issue of Blocks Magazine includes 20 pages of exclusive content about the LEGO Skylines series. This includes 15 pages of content that I wrote, including look at how I designed my custom ‘Seattle’ Skyline. ‘Urban Designer’ is one of many articles in Issue #30 of Blocks Magazine about the LEGO Skylines series.

Blocks is an excellent magazine that appeals to LEGO builders of all ages. This issue is especially appealing to adult LEGO builders. In addition to great content about the LEGO Skylines Series, this issue talks with Jamie Berard, the LEGO Designer behind the LEGO Modular Building series including the most recent ’10th anniversary’ addition: #10225: Assembly Square. We also get a preview of the LEGO House, the new Visitor’s Center being built in Billund, Denmark.

There are several articles are about LEGO Skylines:

Blocks is a UK-based magazine, but you may be able to find it outside of the UK. (For example, it is sometimes available at Barnes and Noble in the US.) Purchase this issue or back-issues in print or digital format at blocksmag.com.

I was thrilled that LEGO Architecture set designer Rok Žgalin Kobe was willing to answer some pretty technical questions about how the LEGO Skyline sets were designed, and tell us about the ‘making of’ the new series which was introduced in 2016. Make sure to get a copy of issue #30 of Blocks Magazine to read my exclusive interview. I also wrote an in-depth look at the six sets in the official LEGO Skylines set for this issue. I’m really excited to share this analysis with a broader audience, and I hope it inspires you to create a LEGO Skyline of your favorite city! In my article ‘Your City in Bricks’, I explain my creative process in re-creating Seattle in the style of the official LEGO Skyline sets. I’m really proud to capture the essence of my home city in a great looking model, and hope you like it too. If you are familiar with Seattle, you should notice that I selected the Seattle Space Needle, Seattle Central Library, Columbia Center, and Smith Tower. To capture the spirit of the city, I also included smaller details such as the Monorail, International Fountain, and a Washington State Ferry boat.

For a more in-depth look at how to create your own LEGO Skyline, you will need to find Issue #30 of Blocks Magazine. Learn how to create a skyline of your favorite city in my final article ‘Your City in Bricks’.

The article also teaches readers how the issue of scale is central to the design process when building LEGO Skylines.

What do you think of my Seattle Skyline model? Did you purchase a copy of Blocks Magazine so you can read these articles? Please let me know by leaving a comment below.