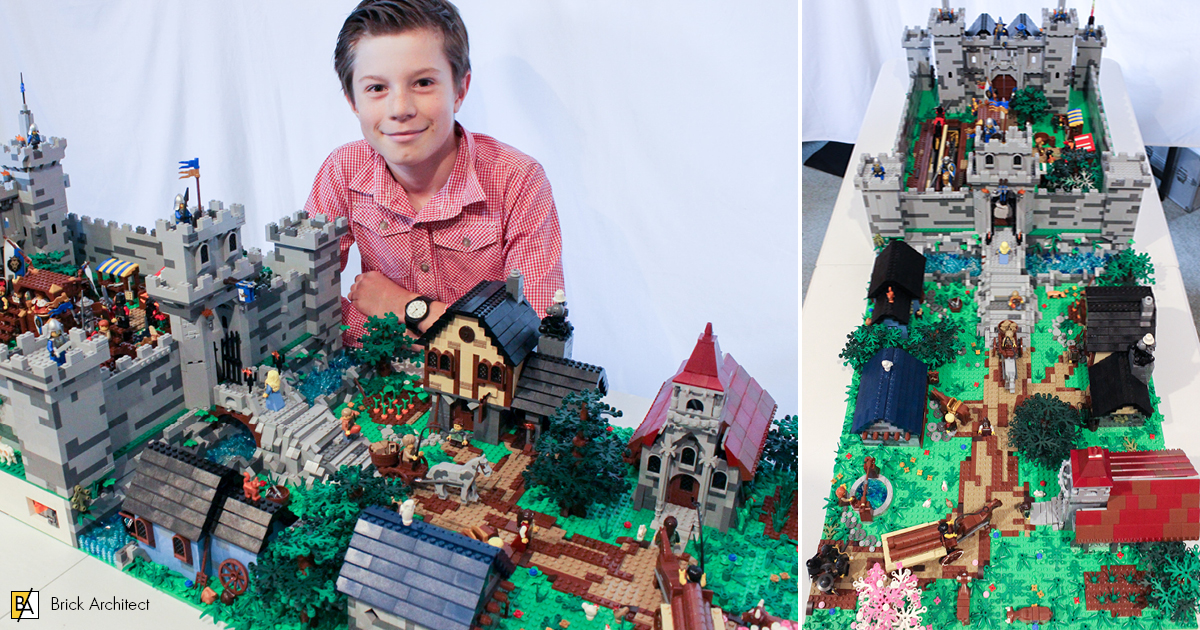 12-year old Matthew Eagles won a national LEGO building competition for his medieval castle. Let’s find out what inspired him to build this amazing creation. BrickIn Castle includes a curtain wall castle with a jousting arena and some market stalls contained within the castle walls. The castle is separated from a neighboring village by a moat and bridge. The village includes a church, a blacksmith’s forge, a stable, a flour mill with water wheel and a well. The model comes to life with power functions including a mechanized joust which uses tank tracks attached to a system of gears, the water wheel powered by a series of cogs and wheels, and lights illuminating the stained-glass in the church.

You can also see a video of Matthew demonstrating BrickIn Castle. I also encourage you to take a look at the creations of some of the other regional winners, as I am always amazed how creative young builders can be.

Brick Architect: Matthew, Congratulations on the competition win! Your entry was very inspirational, and I thought it would be great to share it with our readers at Brick Architect. Do you have any idea of the total brick count for BrickIn Castle?

Matthew Eagles: We ordered 3,305 bricks and parts specifically for the project. I estimated that I used about another 3 thousand bricks of my own. The moat used over 600 1×1 round plates! There was lots of Lego throughout the lounge and playroom when I was building! I used a lot of ice-cream containers to put pieces in that I thought would be useful for the castle build. Because I had to conceal the motor for the joust I had to build the castle on a platform. There would be over 100 supports underneath to hold the castle.

Support structure for the castle and mechanism of the joust (left). Bridge across the moat (right).

Brick Architect: Can you tell us how you came up with the idea for your entry? I know you have stated it was inspired by your first set which you got eight years ago when you were four years old. Yet the difference between LEGO set #6193 Castle Building Set (containing 57 elements and a total of 137 pieces) and your creation is massive. Did you have any other inspirations when developing the idea for BrickIn Castle?

Matthew Eagles: That was my only plan to build a big castle as I like castles and have read lots about them. I knew I wanted to build a village to go with the castle to make it like a whole scene.

LEGO Set designer Justin Ramsden’s design for #71043 Hogwarts Castle was inspired by childhood favorite set #6020. Matthew was inspired by #6193—We can’t wait to see all the great models he builds in the future!

Brick Architect: I like the connection you made between your first set, and your challenge to yourself for the competition entry build. LEGO Designer Justin Ramsden said the total element count for Hogwarts Castle is 6020 elements. 6020 is also the set number of Justin’s first set LEGO System #6020 Magic Shop – which coincidentally also contained LEGO’s first wizard. I know you would love to work with LEGO as a designer one day, what sort of LEGO themes and sets would you like to be involved with and why?

Brick Architect: Let’s talk about the buildings contained in BrickIn Castle… Our audience enjoys hearing about the creative process for designing LEGO buildings. Your creation would have required some research given that it was set in medieval times. How did you research what these buildings should look like?

Matthew Eagles: I Googled pictures of castles, but I got most of the design ideas from my head, or from watching the Lord of the Rings.

Brick Architect: And how do you record your ideas as you research?

Matthew Eagles: I have a big board that is half white board and half cork board to stick and draw ideas. But lots of my ideas evolved from when I was building. I would think of ways I could modify or improve the look of something. Brick Architect: How do you work through your ideas – do you draw your ideas down on paper, use technology or just build from your mind and resolve the design as you build?

Matthew Eagles: I drew tons of plans and went for the ones that were buildable. Interestingly, my initial drawings that I did for the castle are completely different to what I built, this was due to restraints with the pieces I had and then Mum had to start ordering big time on Bricklink as I would have an idea but not the parts.

The last week before the competition closed I was still waiting on a couple of parts to finish the church steeple, they had to come from Australia and I really needed them to have the church looking right. It got quite stressful waiting for parts to arrive. Luckily, they arrived 3 days before I had to put my entry in. I wanted it to look old and realistic. The first thing I built was the joust, then the blacksmith building then the church, the water wheel and then the castle. The finer detail I put in afterwards once I knew how everything was going to fit on the base that I had made.

Brick Architect: I particularly enjoyed the church including the stained-glass windows which you lit. How did you design the church, is it based on any specific church?

Matthew Eagles: It is based on a combination of my family church, the church where my grandparents worship, a generic medieval style church and the church in Godric’s Hollow from Harry Potter. My family’s church is modern but it does have beautiful stained-glass windows which I wanted to include in my church design. The colorful stained-glass windows are a major feature of my design due to lighting the interior. The church is based on a combination of elements from Matthew’s family church, the church in Godric’s Hollow from Harry Potter, and other medieval churches.

Brick Architect: I was particularly impressed by the fact you had mechanized some elements. I know the complexity that this brings to the build to make these elements work and then also conceal the batteries and other componentry. I understand initially you were inspired to mechanize the joust after seeing a jousting re-enactment. Tell us more about that and how you made it a reality.

Matthew Eagles: I wanted a joust because it really bought the castle together. But making it was hard, after building Technic sets I have worked out tips and tricks for building with Technic pieces and then it all started to line up and it worked. It uses tank tracks that I laid on their sides and I had to work the mechanisms around that concept.

Brick Architect: Did you design the church knowing you would light it, or was that an afterthought? If the decision to light it was made later, did you go back and change the church design particularly the windows as a result?

Matthew Eagles: I made the church knowing I was going to put in the lights but I only had one pair of the LEGO lights so I had to get another pair.

Brick Architect: Finally I understand that the water wheel was difficult to mechanize due to the inherent difference in speed between the power function box and a medieval water wheel. Tell us how you went about solving that problem.

Matthew Eagles: It was a big challenge getting the gears to slow the motor down in a small area but after a bit of building I made a system to slow it down, but then there was the challenge of the water parts getting stuck under the water wheel and stopping it, so I made a wall by stacking the water pieces around the wheel. You can’t tell that I have done that as it is within the moat and surrounded by more of the 1×1 round plates. Adding motion to the Water Wheel was challenging because there wasn’t very much space to hide the motor, and it had to be stepped down so it didn’t rotate too quickly.

Brick Architect: Tell us about your current favorite LEGO themes/sets including those on your wish list and/or your favorite elements.

Matthew Eagles: My favorite and most desired theme at the moment is LEGO City because I am currently in the process of making an airport twice the size of my castle for next years (2019) Brick Show.

Some of my favorite LEGO sets at the moment are the Technic Bugatti Chiron (#42083) to go with my Technic Porsche 911 GT3 RS (#42056) and the LEGO City Hospital (#60204) because of its modular ability and an amazing ambulance.
My favorite elements are the new bendable medium legs (for Minifigs as featured in the latest Harry Potter sets), the new snake (Nargini) from Harry Potter and the hot dog bun!

Brick Architect: Your prize as the national winner is a family trip to LEGOLAND Japan, staying at the LEGOLAND Japan Resort. Have you taken the trip yet?

Matthew Eagles: We haven’t taken the trip yet, but Mum is planning it all now. I have mapped out everything I want to do at Legoland… I am so excited about visiting Legoland!

Brick Architect: What does your mum think of all of this?

Leanne, Matthew’s mother: I am extremely proud of what Matthew has achieved. He has loved LEGO for such a long time and is always coming up with builds and ideas that constantly amaze us with the complexity and design. He has always been a very good problem solver and is extremely patient when he is working on a design.

Now that he is older he is doing lots of interesting designs, using more complex ways of achieving movable parts whether with a motor or by using parts to achieve the right effect. LEGO is an amazing product, and we are very grateful to the competition organisers for choosing Matthew’s design. I am so excited to see what Matthew does with his future and his desire to become a LEGO designer.

I hope you enjoyed this look into the creative mind of a young LEGO builder. How has your first LEGO set inspired some of your later LEGO creations? Let us know in the comments.

Photos by the Eagles family unless otherwise noted.