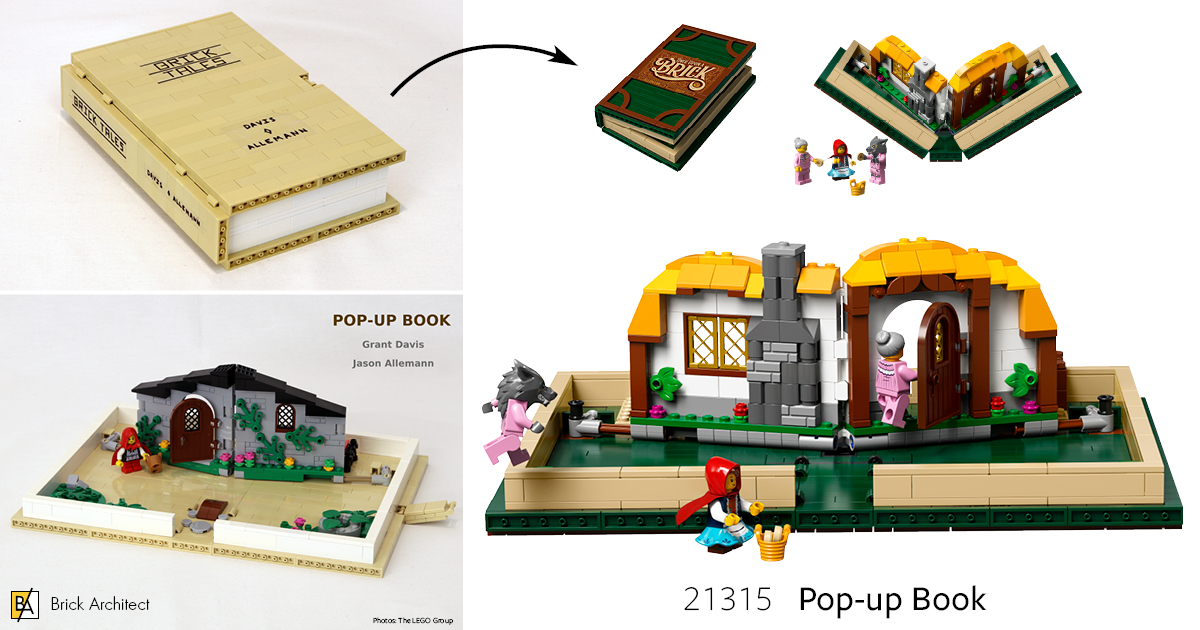 #21315 Pop-Up Book is the newest addition to the LEGO Ideas series, and will arrive in stores on November 1st. Let’s take a look at the upcoming set, and see if it has improved from the original submission.

It can be hard to keep a secret. If that secret concerns something about which you’re passionate, it can be even more difficult. Back in early August, I was lucky enough to take part in the Fan Media Day event at LEGO’s US headquarters in Enfield, CT. One of the day’s highlights was definitely getting to see the Pop-Up Book in person. Now that the set has been officially announced, I’m excited to finally share my impressions.

The Pop-Up Book was posted to the Ideas site in August 2016. (Link to original submission.) It was designed by talented LEGO artists Grant Davis and Jason Allemann (creator of the Ideas set #21305 Maze). The book was shown with four different interchangeable scenes: jungle, castle, western, and cottage – though the cottage scene clearly depicted the Little Red Riding Hood fairy tale. Campaign updates added a steampunk gear assembly, a spooky crypt-based scene, and two more fairy tales: Humpty Dumpty and Rapunzel. The project reached 10,000 supporters just over a year later, in September 2017. It was part of the third and final group of eligible sets from 2017 reviewed for potential creation as an official LEGO set. On May 31, 2018, it was announced that the Pop-Up Book had beat out the other six contenders.

A Sneak Peek: I had the opportunity to represent Brick Architect at the Fan Media Meet’N’Greet in Enfield on August 10th. At the beginning of the day, we were told we were going to see an upcoming unreleased set. That, on its own, was exciting enough, but when the Pop-Up Book was taken out of a plain cardboard box later that day, there was an audible “Oooh” from everyone in the room. The wait is finally almost over!

This set is beautiful, even when the book is closed. The cover is Earth Green (Dark Green) with accents in Reddish Brown. Three new printed tiles, also in Reddish Brown, add the title and authors to the front cover: a 16×8 Tile (Part 90498) says “Once Upon a Brick”, and each author gets their name on a 1×6 tile (Part 6636). The construction of the book itself seems to be identical to that of the original fan design. Each side of the pop-up scene in the book is secured with a Technic Pin, 3L with Stop Bush (Part 32054) placed into a 1×2 Technic Brick with Hole (Part 3700).

Grandma’s cottage has gotten a bit of a makeover since the original set, and now sports a chimney that runs up the front façade, and what looks to be a thatched roof, in Bright Yellow (Yellow). In some of the official photos, we can glimpse a table and Grandma’s bed inside the cottage.

Jack and the Beanstalk

The second scene included is not an update of one of the fan-designed concepts. Instead, the LEGO designers have recreated Jack’s famous beanstalk, along with the Giant’s castle perched at the top. Ingeniously, the Giant is a minifigure, and our intrepid hero Jack is a microfigure. Opening the book unfurls the beanstalk, and that Technic-built mechanism is what most enchanted many of us back in August. #21315 Pop-up Book with Jack and the Beanstalk insert.

This set comes with five exclusive printed figures: four minifigures and one microfigure.

Three minifigures for the Little Red Riding Hood fairy tale, and two for Jack and the Beanstalk.

LEGO has really knocked it out of the park with this set. To be fair, the original design was excellent and did not have to be altered much. This likely explains the quick turnaround time from announcement to release date. I’ve known since I first saw it that I’d be there on the first day to buy the Pop-Up Book, and November 1 can’t come fast enough.

What are your thoughts on the new LEGO Ideas set—will it earn a place on your bookshelves? Let us know in the comments below!

Enjoy 2 classic fairy tales with this brick-mazing pop-up LEGO® book!
Build, play and display the classic fairy tales Little Red Riding Hood and Jack and the Beanstalk with LEGO® Ideas 21315 Pop-up Book! This first-ever buildable pop-up book made from LEGO bricks opens to reveal the famous scene of grandmother’s forest cottage featuring opening door, bed and kitchen area. Recreate the scene when Little Red Riding Hood meets the wolf or swap out grandmother’s cottage for the scene of the giant’s castle in the clouds. This collectible toy features enough bricks to build both scenes or you can even build a scene of your own and makes a perfect creative gift. This LEGO set includes a booklet with a short history of pop-up books, a condensed history of each fairy tale in the set, as well as information about its fan designers and LEGO designers.

• Build and display or recreate your own stories from 2 classic fairy tales with this imagination toy.

• This LEGO® Ideas set features enough bricks to build both fairy tales in the set or you can even build your own scene.

• Includes a booklet featuring building instructions, a brief history of pop-up books, a short history of the 2 fairy tales in the set, plus information about this amazing classic fairy tale’s fan designers and LEGO® designers.

• 859 pieces – LEGO Ideas playset for boys and girls aged 12+ and for fans and big kids of all ages; This LEGO Ideas 21315 Pop-up Book building toy can be built together with all other original LEGO sets and LEGO bricks

• Build and display or recreate 2 of the best known and most cherished classic fairy tales with this LEGO set: Little Red Riding Hood and Jack and the Beanstalk. You can even build your own scene and mount it in the book