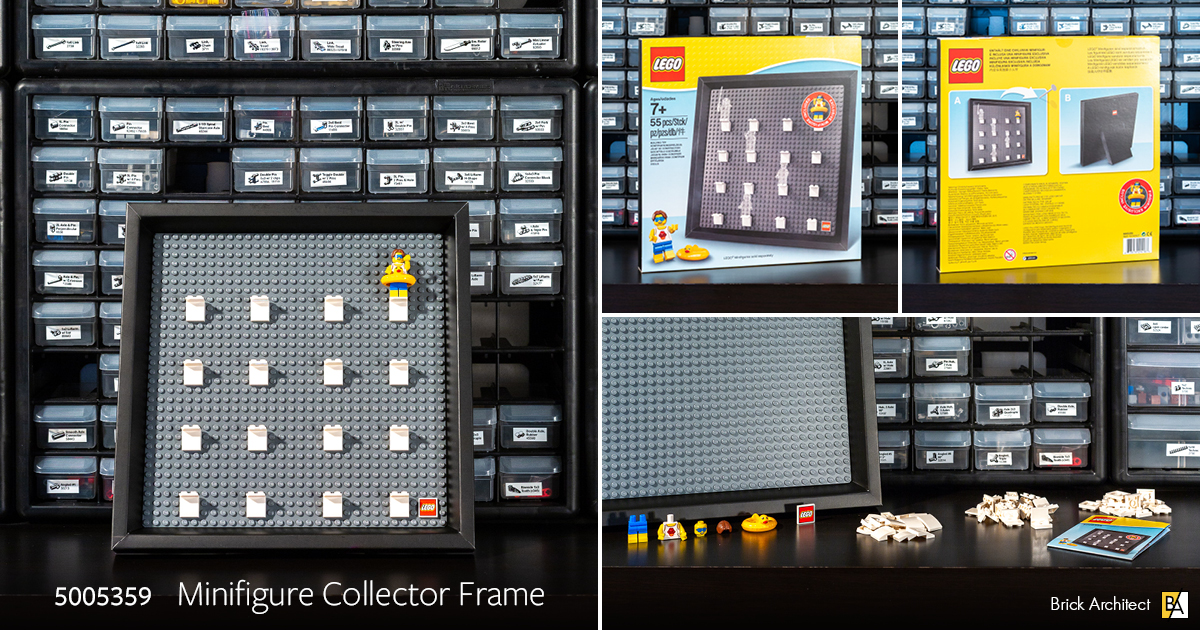 Is the latest free with purchase promotional item a cheap gimmick, or a high quality way to show off your favorite LEGO Minifigures? Let’s find out!

Here at Brick Architect, we don’t just like to build LEGO, we also like to find the best ways to Organize, Sort, Store, and Display your LEGO collection. That’s why we wrote the premiere e-book on the subject: The LEGO Storage Guide. (If you haven’t read it yet, what are you waiting for‽) #5005359 Minifigure Collector Frame is free with purchase at the LEGO Store.

The set contains 55 pieces, which includes a 32×32 baseplate, the brick-built supports which each minifigure stands on, and the 5 pieces used to assemble the exclusive minifigure which is included with the set.

The set does not have an explicit market price since it is not available for purchase separately, but it appeared on my receipt with the same $16.99 price (and associated -$16.99$ coupon) as the similar #853611 Marvel Super Heroes Minifigure Display Frame (2016), and 853638: Batman Minifigure Collector Frame (2017). Both of those sets were sold for $16.99 when they were available in LEGO stores. It’s also worth noting that they decided to include space for only four columns of minifigures in the new version of the Minifigure Display Frame, since both the Marvel Super Heroes and Batman versions held 5 minifigures in each row, for a total of 20 minifigures.

There isn’t much to build, as the 32×32 199Dark Stone GreyDark Bluish Gray baseplate is glued to the cardboard frame. Yes, that’s right—the frame is made of cardboard. It looks a bit cheap next to wooden frames in your home, and it’s not going to hold up to being dropped or used by children. The cardboard frame comes pre-assembled. You can hang it from the wall on a nail, or you can carefully display it on a table with a flimsy cardboard stand which pops off the back.

The set contains 55 pieces, including an exclusive “stud muffin” minifigure.

You do get to assemble a simple stand for each minifigure using three parts. First, you attach a 2×2 plate to the baseplate. A 1x2x2 Angle Plate attaches to that, and a 2×2 Curved Plate holds it together. Be careful, the stand is made of cardboard.

You also get to assemble the exclusive minifigure which is included in the set. The minifigure includes a new custom printed torso showing a tank top with the not-so-subtle image of a muffin with a stud on it. It’s a clever image, albeit a bit poorly timed given the protracted struggle with misogyny underway in the United States. The custom-printed head also appears to be new, featuring sunglasses on one side and pursed lips on the other side. The exclusive “Stud Muffin” minifigure will be the highlight of this promotional set for many LEGO enthusiasts.

Lastly, we get the same Rubber Duck inflatable which was also included on the Batman Collectible Minifigure series.

There is a whole section of the The LEGO Storage Guide dedicated to Displaying and Storing LEGO Minifigures. I wanted to highlight a few other ways to display LEGO Minifigures here… The only readily-available official LEGO minfigure storage solution can be used as a stackable tabletop display case, or wall-mounted like a frame. The smaller model can display up to 8 minifigures, and the larger one can display up to 16 minifigures. It has a front cover to keep the dust out. If you want to display your LEGO minifigures on your desk or a shelf, a display case is perfect. Cases like this which are custom-designed for LEGO Minifigures include a custom riser, allowing you see minifigures in further back rows. Display a huge collection of LEGO Minifigures in a purpose-built display frame like this one. Look for a frame with a glass or plastic door to protect your collection from dust.

It is hard to recommend the LEGO Minifigure Display Frame as a product to seek out, because it is a cheaply made product which won’t hold up to extended use, and I think the uneven gaps in the columns look weird. Further, I strongly recommend storage solutions which keep dust off your prized LEGO Minifigures. Thankfully, this is a free-with-purchase item, and it includes a nice free exclusive minifigure. Even though it is a free item, it only earned the Brick Architect rating of ‘Acceptable’ (2/5 stars) due to the cardboard case, uneven column width, and lack of a dust cover.

Want a free way to show off your 16 favorite LEGO Minifigures? #5005359 Minifigure Collector Frame isn’t a great product, but it includes a nice custom minfigure, and it’s free with purchases over $75 at shop.lego.com through the end of the month.

Photos by Tom Alphin unless otherwise noted. Visit the About page for more info about our journalistic standards and affiliate programs.