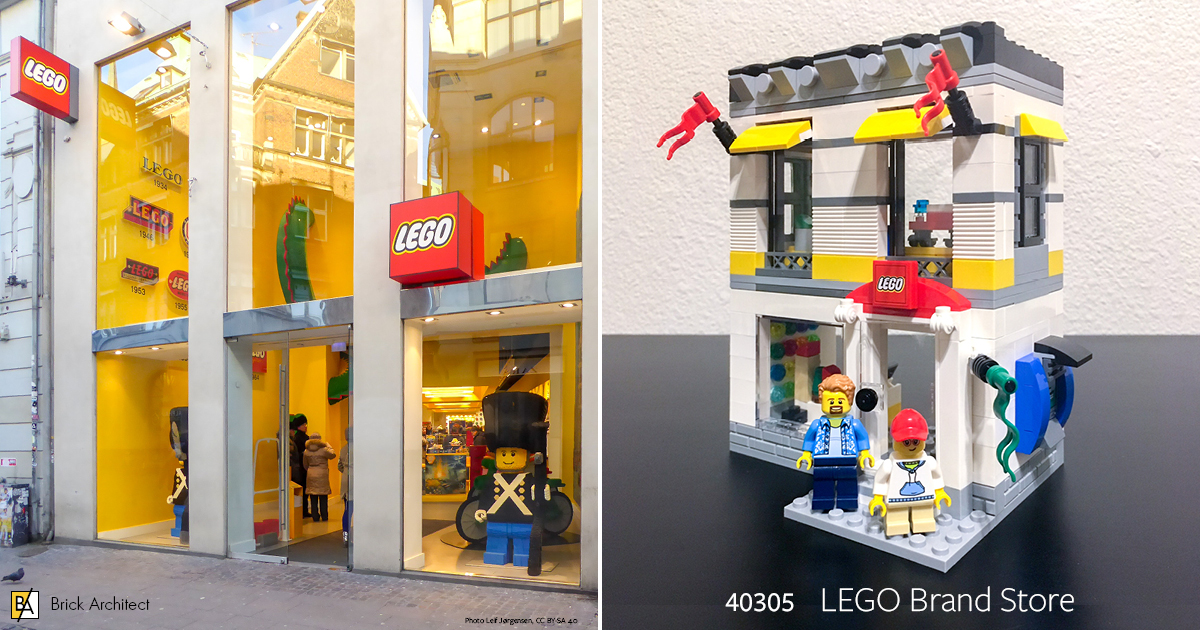 Have you always wanted to add a realistic LEGO store to your growing LEGO city? Let’s find out if #40305 LEGO Brand Store is a satisfying way to bring your favorite store into your home.

#40305 LEGO Brand Store is the latest exclusive brand store set, and was first released as a LEGOLAND Billund exclusive in May 2018. It is now sold exclusively through LEGO flagship stores around the world. As a flagship store exclusive, this set can only be found in the larger LEGO stores around the world and cannot be purchased online or in local LEGO stores as of now. The set retails for $24.99 (24.99€, £21.99) and has 362 parts. That’s just 6.9 cent per part, which is a very good value. This set however, has no exclusive minifigures or pieces, so you may be able to build it from common pieces you already have if you not be able to get access to the set in a store. That said, this set has a wide array of exclusively unique and new stickers that add character and diversity to the build. Despite being a store exclusive set, #40305 LEGO Brand Store is not the first LEGO store built in LEGO form. A trend however with LEGO store sets however are their exclusivity, either being given out as a free gift with purchase, purchasable from LEGOLAND or flagship stores. #40145 LEGO Store was released in 2015 as a purchasable set from brand new LEGO stores, but is now discontinued. Some LEGO stores will still provide this set as a free gift with purchase on opening night of a new store as an exclusive in some parts of the world should you be lucky.

#3300003 LEGO Brand Retail Store was released the same was in 2012, but rather than being a minifigure scale set, this set was released as a promotional micro build. #40178 Iconic VIP Set polybag was a promotional polybag released in 2018 that was a free gift with purchase. This cute little set could only be obtained free for LEGO VIP members and can occasionally still be obtained from LEGO purchases in 2018.

One of the first features of the external architectural structure of this store is the sheer number of windows. With window pieces being among the less common pieces in LEGO builds you get a large number of transparent pane glass windows in a variety of sizes in this set. On first glance this store reminds of the LEGO store in Leicester Square London, with its mix of glass and rustic baroque architecture built by the Abbot of Westminster Abbey in 16th century London. The LEGO store in Copenhagen adopts similar architectural styles in their LEGO store design. The set itself is divided into two halves, built in a modular fashion such that the top and the bottom of the store can be removed. The external walls are built primarily of bricks, but with a variety of colors and textures to add detail and structure to the walls. A variety of flags on the walls of the store represent the store being a flagship store. Awnings and window detailing adds additional detail to the structure, adding variety to the already textured walls, giving a atheistically pleasing look from both close and afar. Despite looking like a simple build, the designers of this set put a lot of thought into external detailing, putting a lot of attention into the roof and window design. Without ruining the magic, all the windows in this set are built separately and modularly slotted into place, allowing for nice curved textures to be visible without adding strain to the parts. Round tiles are used on the ceiling to add texture to the walls, but also to create a replica large LEGO brick on the ceiling. A simple yet nice touch. The brick-built 2 by 4 LEGO brick on the roof adds a special touch.

Paying reference as a joke to the price of LEGO and desirability to purchase more the designer has placed a LEGO brick built atm that is readily accessible to the side of the ground floor wall. A minute yet humorous detail. From the outside a glimpse of the internal details can be seen, giving off the look of a store packed with merchandise. An ATM machine is a cheeky reminder that LEGO is an expensive hobby.

A Variety Of Internal Details

As is common with most LEGO structures, when turned around the back wall is cut away, allowing you to see straight into the store. The first observation, albeit a minor complication is the lack of stairs in the building, posing the question “how do the shoppers get to the second level”. Despite this minor oversight (or intention) the store is full with details across both floors. A selection of tiny LEGO sets are available for purchase.

Along the windows on both floors sit LEGO sets for external passersby to view, including houses and a truck. Inside the store, along the walls on both floors sit boxed LEGO sets, as one would find in a real store. A simple yet detailed brick-built pick-a-brick station can be found on the first floor behind checkout station, mirroring the build of a pick-a-brick wall in #40178 Iconic VIP Set Polybag. Moving to the second floor a build-a-minifigure bin is very accurately yet simplistically built, along with a foam LEGO shield in a create existing in the opposite side. All of the interior details are very minimalistic but adds a nice touch of detail to the store. From pick-a-brick walls, to LEGO sets to build-a-minifigure bins. This store has it all!

Even though this is a small set, it comes with a large number of exclusive stickers that add a nice touch to the shelves of the LEGO store. The stickers are mostly used for packaging of the LEGO sets inside the store, with the themes for the sets varying from City, Friends, Ninjago, Junior and Creator. Normally I am not the biggest fan of stickers, but in order to keep price low LEGO has determined to provide clear backed stickers rather than print exclusive parts, a decision I welcome to have kept the price as good as it is. There are still a large number of printed pieces in this set for those who prefer printed parts to stickers. A unique selection of stickers for sets available for purchase. It’s a bit surprising that a LEGO store employee is not included in this set.

Being a fan of LEGO modularly designed houses, this set is no different to the other wonderful sets in the line. Even if you are not the biggest fan of houses, a LEGO branded store can be the centerpiece of any LEGO cities or collections. A very fun, different and detailed build, with a variety of Easter eggs makes this a fun and affordable set for all. The only thing that immediately stands out that could improve the set is the addition of a LEGO store employee minifigure, which a set of this type needs, however this reason alone does not deter from the allure of this set. As with the other LEGO store sets however it is a shame that this set is exclusive to flagship stores, but hopefully this set makes its way as a promotional set or appears in local stores in the future. At a wonderful price per part ratio, this set is a small set, yet a wonderful one, to which I give it a 4/5 stars (Highly Recommended).

Average rating for this set from brickinsights.com If you have the opportunity to pick up this set from a store near you I highly recommend grabbing this fun and iconic set. Even if you can’t find it at your local store, you may be able to buy #40305 LEGO Brand Store online.

#40305 is fun and detailed build which you are sure to enjoy. It is a Highly Rated set, which comes strongly recommended for serious LEGO collectors.

Unless otherwise noted, photos in this article are by Koen Van Der Hoeven.