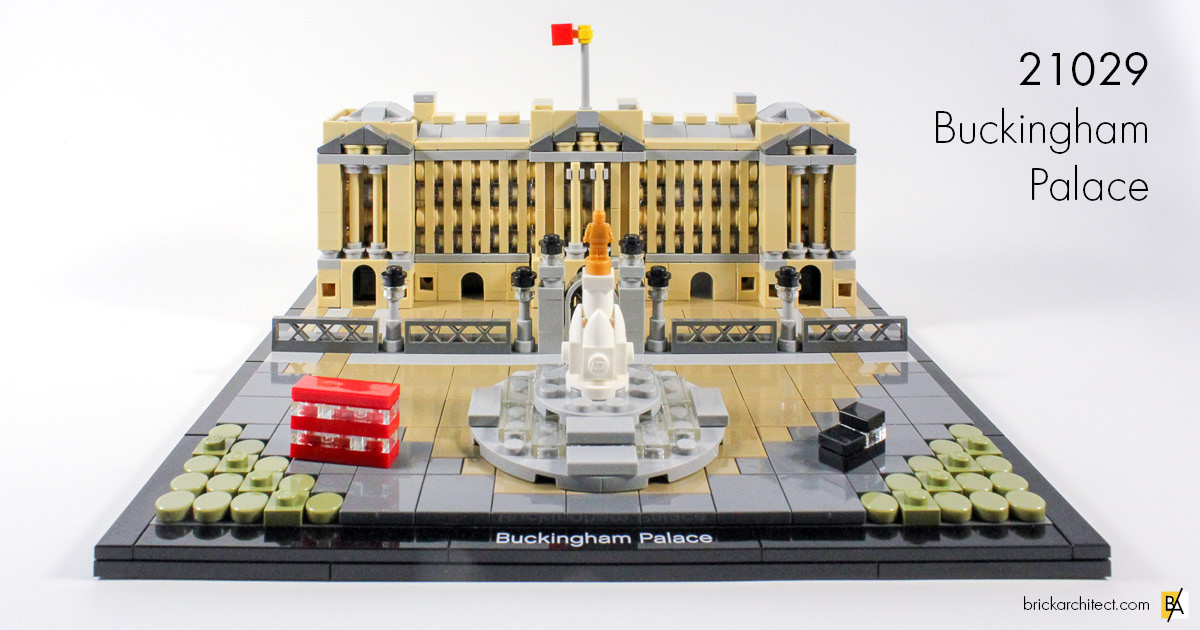 Let’s see if #21029 Buckingham Palace is a good introduction to the LEGO Architecture series for one of Brick Architect’s newer contributors.

Even though I have already built the #21034 London Skyline set, this is the first set I’ve built from the original “Landmark” series within the broader LEGO Architecture theme. #21029 Buckingham Palace (released in 2016) seemed to be the perfect introduction to the core Architecture line — can you tell yet that London is one of my favorite cities?

From the Ground Up

As seems to be the case with all Architecture sets, you begin by assembling the base and black edge with a custom labeled tile. This is followed by the foundation of the building, the forecourt, road, and gardens opposite the palace. I like how a simple mix of 330Olive Green 1×1 plates and round tiles create the visually interesting stylized gardens. The base is three plates thick, with tiles creating a smooth finish.

While I initially thought the gardens (which are filled with flowers in real life) could have used more color, I quickly realized the LEGO designer knew what they were doing; multiple colors would have been too distracting.

The base of the building uses 1×2 jumper plates to slightly offset the building’s middle section from its two side wings. As is common with many LEGO buildings, the backs of headlight bricks are used for windows. Detail showing how vertical windows are made using SNOT techniques.

The remaining windows are created with 40Transparent Trans-Clear 1×1 plates alternated with 5Brick YellowTan 1×1 round plates and sandwiched between 5Brick YellowTan 1×4 plates. These sections – six in total, of varying sizes – are then turned on their side and make up the front and sides of the building. This mixture of square and round elements gives a nice texture when viewed from their edges, hinting at the finely detailed architecture of the neoclassical building. The bulk of the façade consists of this technique, with 4L Bars mimicking Corinthian columns. After finishing the pediments above the columns along with the rest of the roof, the build moves on to landscaping details.

The fence is built using 1x4x1 199Dark Stone GreyDark Bluish Gray fences separated by lampposts made with telescopes. The front is finished by adding a classic red double-decker bus, a black cab, and the Queen Victoria Memorial Monument. The monument uses a 297Warm GoldPearl Gold Minifigure Trophy to represent Winged Victory, and White Horizontal Tooth pieces for the marble statues surrounding the plinth. With 780 pieces and a retail price of $49.95, this set has a price of 0.06$ per piece. This is a great deal for an Architecture Landmark set. In fact, it’s the best deal you can get for this line. Since #21000 Sears Tower was released in 2008, there have been 21 Landmark sets. Of those 21 sets, only eight have been less than 0.10$ per piece, and only two have been less than 0.08$ per piece. It’s likely that the large number of 1×1 plates and small tiles is the reason for this set offering the lowest price-per-part across the entire line.

While this set doesn’t have any new pieces, it was the first appearance of the 1×1 Round Tile in 24Bright YellowYellow Brick, which, surprisingly, has since appeared in only seven sets. The Minifigure Trophy in 297Warm GoldPearl Gold has appeared in five sets, of which this was the second.

For the most part, this set does an incredible job of capturing Buckingham Palace and the area immediately in front of it. I think the only way to improve it would be with the addition of a piece that wasn’t released until 2017 – the year after this set’s release. In real life, the Queen Victoria Memorial Monument is flanked by semicircular pools that could be represented with part 27507 – Tile, Round Corner 4 x 4 Macaroni Wide in 321Dark AzurDark Azure, or possibly 140Earth BlueDark Blue, which would fit the more understated color scheme of this set.

The high quality of the box and thick paper used for the information-laden, perfect-bound instruction book make it clear that the Architecture line is for true collectors, of which I am now most definitely one.

I’m pleased that #21029 Buckingham Palace was my first traditional Architecture set: I truly enjoyed the build, the techniques were interesting, and I love the finished product. I would highly recommend this set for new and established LEGO Architecture fans. Yes, it’s a great value, but more importantly, it’s a great LEGO set!

Have you built #21029 Buckingham Palace yet? If not, have we convinced you to give it a try? Either way, please share your thoughts by leaving a comment below!

Unless otherwise noted, photos in this article by Michael Kindness.