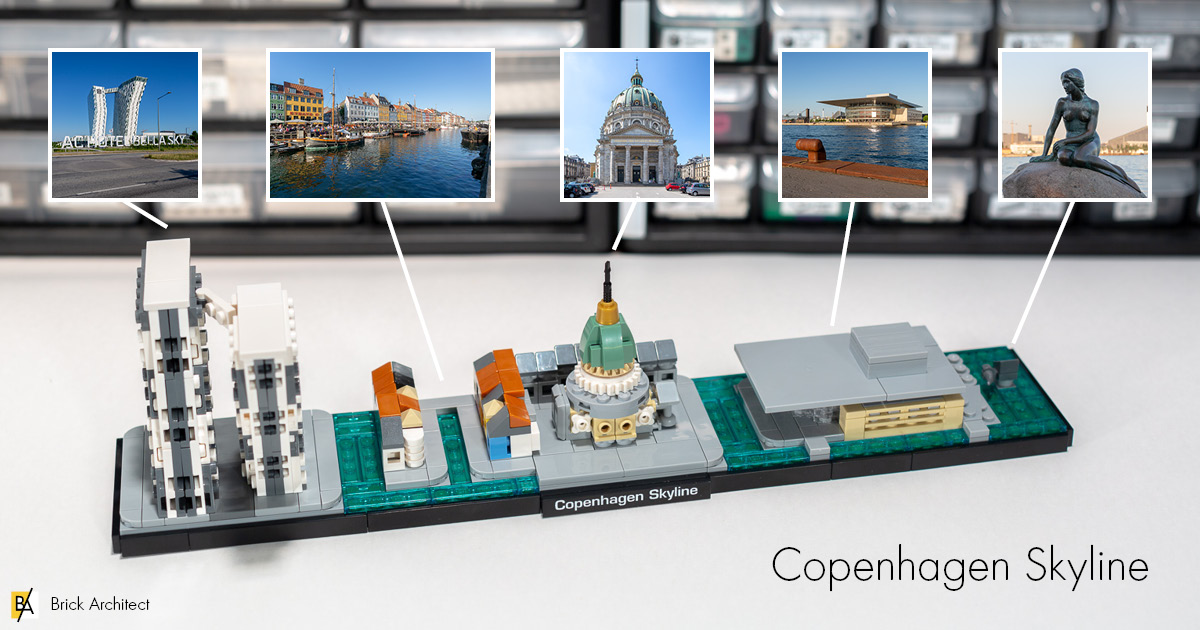 Let’s see one of LEGO Architecture’s most talented builders interpretation of the LEGO Skyline concept in this custom set based on Copenhagen, Denmark. The set comes in a glossy white box. It is a limited release, with just 1000 numbered copies.

Today we’re reviewing a rare LEGO set created for the 2018 Brick World convention in Copenhagen. The set was designed by Rocco Buttliere, the talented LEGO architecture enthusiast most famous for rebuilding dozens of buildings from Chicago and around the world at a consistent 1:650 scale. This time, we will get to see what he can do at a slightly smaller scale. The set includes 527 pieces, which is above average for the official LEGO Skyline series. Only two skyline sets have more pieces: 21028 New York City with 598 pieces, and 21039 Shanghai with 597 pieces.

The building instructions come in a high-quality staple-bound booklet with glossy pages and quality printing. The instructions were designed by Knud Albrechtsen.

The LEGO model features the following buildings and landmarks (in order): The order of the buildings in the finished model roughly match how they appear on a map.

If you have built sets in the official LEGO Architecture series, you will immediately notice that at eight studs deep, this model is significantly deeper than the official skyline kits which are four studs deep unless a small section needs to protrude forward or backwards. You may also notice that all four sides are covered with 1x black tiles using SNOT techniques, whereas the official sets only have tile covering the front face. I believe the reason for covering all four sides with tile is to cover up the 37Bright Green plates which are covered by 42Transparent Light BlueTrans-Light Blue tiles to create the harbor. Unfortunately, the instructions for the base were difficult to follow, and the base is a bit flimsy.

I am afraid that I encountered a few frustrations while assembling the base that need to be explained. The first concern is that the building instructions are hard to see, because the border between each part is far too difficult to see. (Upon close inspection in good lighting, people with good vision should be able to see the edges of each part.) The second challenge is that the instructions ask you to carefully position a lot of parts on a flat surface in one step, then add a second layer of parts in the next step to hold everything together. This works well in theory, but in practice the parts will get bumped as you add the second layer. It would have been better if they added fewer parts in each step. Lastly, I wish long plates were interleaved to make the base more rigid.

Let’s take a closer look at the 5 landmarks featured in the model. I just returned from a trip to Copenhagen where I was able to visit all five sites, so I will also include photos of each building, and my impressions of the LEGO models. The building instructions work from right to left, so we will review the models in the same order.

The model starts off with an abstract representation of the classic tourist destination — The Little Mermaid sculpture which is situated on the harbor about a mile north of downtown. The horn is a creative part usage representing the mermaid’s tail, but I do not like how the sculpture was represented. Realistically, I think it would have been better to remove this element from the model.

The Opera House is an attractive building with a very prominent location in the harbor, exactly opposite from Frederik’s Church. This orientation is faithfully captured in the model, although in reality, the Royal Apartments sit in-between the two buildings. The LEGO model is expertly rendered at this small scale, re-creating the round glass atrium and large overhanging roof very well. This is one of the strongest elements in the model.

Frederik’s church is a beautifully symmetrical building which has a prominent place in the city center. It is in the Rococo architectural tradition, but much more restrained in both the interior and exterior than many buildings of the same style – reflecting a shift towards less decorative Neoclassical designs. The model is easy to assemble using the directions, although I find the finished product a bit underwhelming. The apex of the roof is well designed using 151Sand Green 1×2 bows, but the Technic gears look a bit out of place even though they result in the right overall shape for the building. The instructions for the church were easier to follow.

Nyhavn is absolutely stunning on a sunny summer day like the day I visited Copenhagen. The brightly colored buildings and blue water makes for a picturesque place to enjoy a meal or ice cream cone. The LEGO re-creation is pretty faithful to the real thing, leveraging an array of bright colors and staggered rooftops to capture the feel of the place at a very small scale. I did have some difficulties assembling this section due to the angle used for the building instructions. While technically simple to assemble, you have to guess for certain parts since the angle used for the instructions doesn’t let you see the reverse side.

One of the most unusual looking hotels that keeps showing up in Design blogs is the Bella Sky hotel, which is situated next to a major convention center near the airport. The building looks really striking, even though the form is relatively simple, with two rhombus-shaped volumes connected by a skybridge. The LEGO version was a great pleasure to build. I love how Rocco expertly creates these unusual shapes using common LEGO parts, and a unique approach employing two panels of SNOT construction placed back-to-back. This was definitely my favorite part of the model to build. Assembling each wing of Bella Sky using two panels was the highlight of the whole model.

This set was available during the 2018 LEGO World event in Copenhagen. A limited number of sets were also available online; they may or may not be sold out.

Translated from byggepladen.dk:
“You can order it by sending an email to skyline@lwfanzone.dk with information about name, address, email address and mobile phone number. Due to the limited number, first priority is paid to those who only order one set. The price is 350 DKK plus shipping.”

There is a lot to love about the mini-models included in this set, and the opportunity to learn creative LEGO architecture building techniques from an expert. I especially liked learning the back-to-back approach used on the Bella Sky model to create two SNOT facades for each tower. I also appreciated the clever use of a 6×6 tile to create the massive overhanging roof for the Opera House.

Unfortunately, the building experience is marred by difficult to follow building instructions. It’s also too bad that the base doesn’t match the rest of the LEGO Skylines series, so it won’t look quite right next to your official sets.

This set is recommended for people with a strong connection to the city of Copenhagen, or people who want to learn some new building techniques from one of the most talented LEGO Architecture builders. Either way, be prepared for instructions that are really hard to follow.

All photos in this review by Tom Alphin. This includes both the LEGO photography, and the photos of Copenhagen which were taken June 2nd and 3rd, 2018.

This product was provided by lwfanzone.dk for this review. The words, photos, and opinions in this article are strictly my own. Visit the About page for more info about our journalistic standards and affiliate programs.