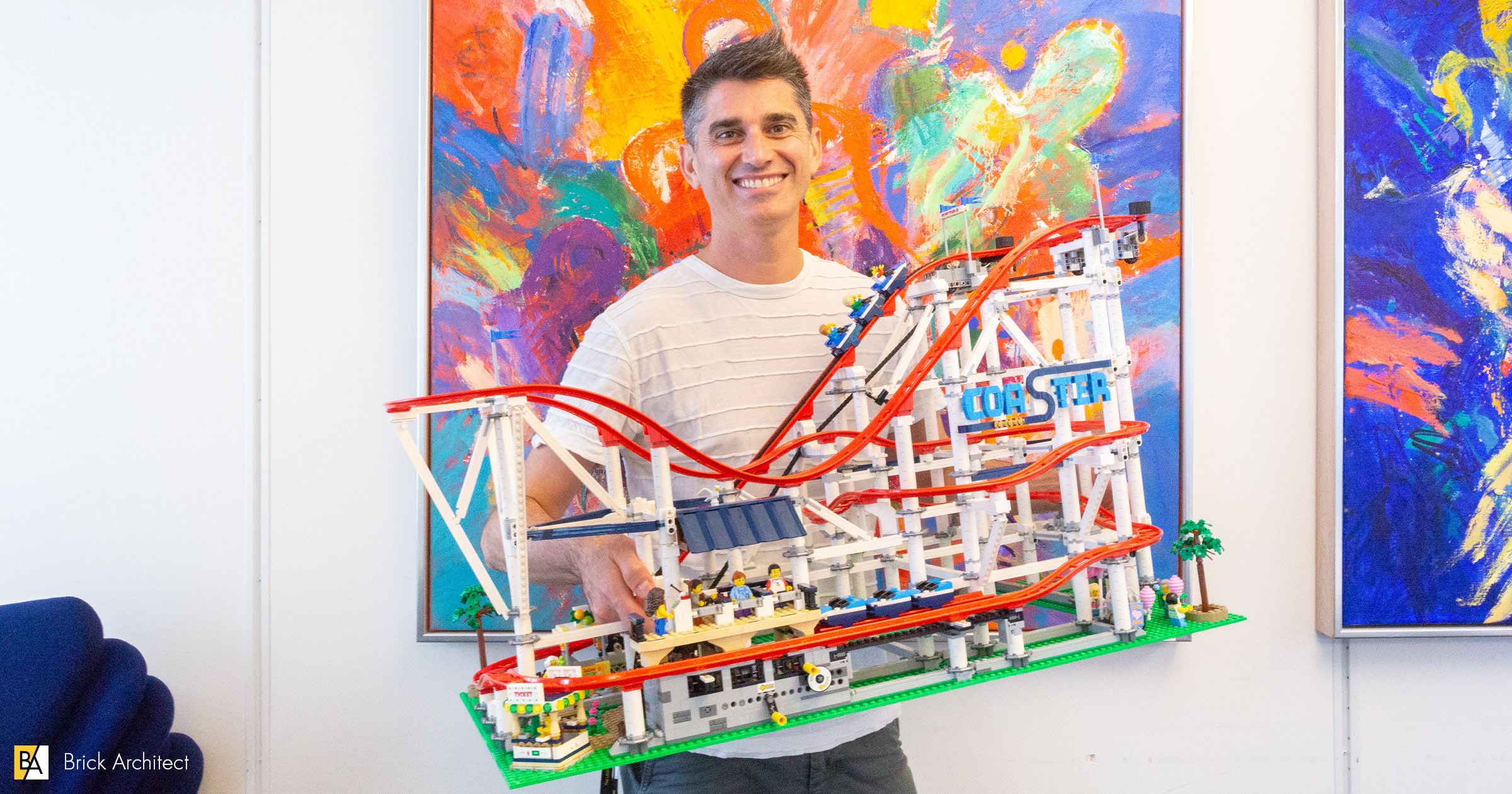 March 4, 2020: If you’re watching the new LEGO Masters TV show on Fox, you may recognize that “Brickmaster Jamie” is one of the Judges!

This interview took place on May 31, 2018 at the LEGO Idea House during the 2018 Fan Media Days event. This is the first of two parts… (The second part will focus on the Modular Building Series.)

Brick Architect: You have been working on the Creator Expert for most of your career, but what did you do prior to that? #10182 Cafe Corner. The set which began the Modular Building Series.

I’ve pretty much stayed in the Creator family since then, with a few loans out to different projects like Aqua Raiders and Friends. Friends had four years of development before the first sets were released — I helped them with the scaling of #3315 Olivia’s House (2012), adjusted expression of one of the airplanes, and gave input on some principle discussions about where that product line could go. Jamie helped establish the scale for #3315 Olivia’s House in the LEGO Friends series.

Other than that, I’ve just worked on 3in1 and Expert which is kind of wild, because most of the designers get mixed up a lot more — It’s unusual to be in the same place for an extended period of time. Most designers tend to get a bit bored building their 6th fire truck or X-wing, so it’s quite normal to rotate them around.

In the Creator team, we are more likely to be happy staying where we are because we do so many different products: one day you are working on a rollercoaster, the next day doing a Winter Village set, a car, an airplane, or a modular building. Because the range of products is so diverse and at different scales, you can be there for a long time and still every day find new challenges.

What Is Creator Expert?

On the role of Creator Expert in inspiring kids:

Jamie Berard: When I was a child, I can remember how inspiring it was to see those few large LEGO sets that were over $100. The fact that we now have such a range of big impressive models—whether you can afford them or not—really sparks the imagination and reminds us that you never have to grow out of LEGO. Brick Architect: The Creator Expert line is unique because the sets cover a wide range of themes.

Jamie Berard: But how do you perceive what makes it Expert? This is an internal question we are trying to resolve…

Brick Architect: To me, Expert requires both a level of complexity and a subject matter that has a more mature focus; I would argue that some of the Christmas sets are borderline.

Jamie Berard: That’s why those are the only ones which are 12+, “bridge” models.

Brick Architect: How do you decide which building or architectural style to re-create for the Creator Expert Buildings series?

Jamie Berard: It is harder for us to accomplish contemporary, clean architecture in a large model, because of our target audience is adults. There is an expectation of detail and authenticity. If you try to re-create any of the well-known architecture that is too minimalist or too clean/simple, in a LEGO version it comes across a bit naïve; where is the interesting stuff? And unfortunately, just building a simple structure out of smaller bricks doesn’t always make for an amazing model.

Brick Architect: Halfway through building the Farnsworth House, I got tired arranging all of the 1×1 Tiles…

Jamie Berard: Exactly, perfect example. it’s a bit of a shame as there is a lot of great stuff to explore, but on the flip side, there’s also a lot of great classic architecture that you can imagine in LEGO and know it’s gonna be great. I’d say anything “old world” looks great in LEGO because we have a lot of opportunities for details, texture, implying different stonework or materials. At this point, I think we have enough colors and shapes and can do a really nice job there. Something like the Sydney Opera House is the closest we came to a Minimalist clean expression, but then you end up noticing all the shadow lines and defects even more, because it is such a clean surface. That was the most challenging to work on of them all, but not necessarily the most well received. It did OK, but it didn’t give people all of the detail bitty fun stuff that they like. And maybe it wasn’t an icon that many people have had a chance to see, I don’t know.

Brick Architect: Maybe being in Australia is part of the challenge… I know it’s one of the few buildings in the series that I haven’t visited.

Jamie Berard: When someone sees a simple architecture model on the box, there’s a risk that they are not feeling like there is enough to discover, but when you see something like Big Ben, you see all these little bitty details, and the clock face is nicely detailed, and say Woah, that’s cool!

Brick Architect: Maybe the difference is that kids build for a challenge, but a lot of AFOLs build to relax?

Jamie Berard: …And the relaunched #10189/10256 Taj Mahal also plays to that. When I first got the original set and built it, I remember the shock of opening it up and realizing that almost 6,000 elements were going to be on my table, unsorted, and I said, Oh My god, and spent three nights sorting those bricks, and then lost interest… so I literally packed up all the plasticware and put it away. It was only months later when a friend visited that I asked if he wanted something to do, and said he could build a LEGO set. Then he saw that I had a Taj Mahal that I hadn’t built, and he started building it when I went to work. And then I came back and realized this is fun when it is all sorted, and we can both be building the same parts, and this is kind of cool. That’s why with the re-released version, we made sure to add prepacks so that friends or partners could more easily build together. It’s strange to think of large complex sets as being relaxing, but with the right flow, they can be. We intentionally try to design the build so that the challenging parts are followed by moments of calm and familiar segments. This allows for those clever moments of “ah cool, I didn’t know you could do that.” Or “that’s interesting”.

Brick Architect: Your designer videos are great… the way you come to life describing the new sets is very genuine.

Jamie Berard: They need to reel-me-in sometimes… That’s actually what happened for the #10234 Sydney Opera House; they wanted us to do these short clips that they could edit together, but I just started telling a story that just kept going and going. By the time I had stopped, 5 minutes had gone by and the production guys kinda shrugged and said ‘yeah, that will work.’

Brick Architect: I’ve also heard about the “Boost” events where you can work on something else for a couple hours. It seems like there’s a sincere desire at LEGO to collaborate to make everyone’s models better in a way that not all corporate cultures are good at.

Jamie Berard: Oh yeah, we have lots of boosts and play tests and sparring session. Yeah, It’s a great process that’s very dynamic. I think we are lucky, to have an international spread of talent that has chosen to come to our tiny village and geek out with LEGO, it’s just fun.

Jamie Berard: I have to be careful answering this; my sense of what’s out and what is not is distorted. I really like the new leaf element, it offers a lot of greenery opportunities, but I have to admit, I still have a soft-spot for the old standbys like the Erling and jumper plate and stuff…

I will have to respectfully pass on this because my current favorite ones are very current, and I’m afraid I don’t know what’s out and available. I would say that within the last year or two (which may mean next year for you), there are some wishlist elements that we have wanted for 10 years… There is a lot of goodness coming out soon.

I hope you enjoyed this behind-the-scenes look at the Creator Expert series through the eyes of designer Jamie Berard. Be sure to come back for Part 2, which will be focused on the Modular Building series.