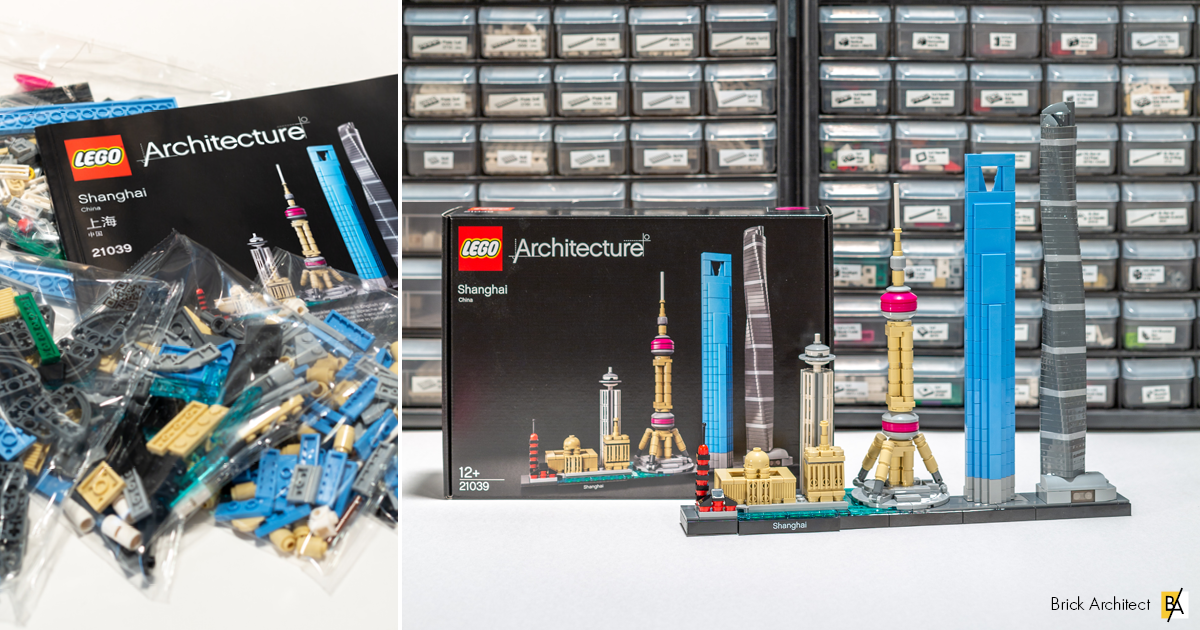 A good looking LEGO model of a fast-growing city, #21039 Shanghai is the latest addition to the LEGO Architecture Skylines series. Can it possibly live up to the hype?

Even though I haven’t visited Shanghai yet, I was immediately impressed when I saw photos of the latest addition to the LEGO Architecture Skyline series. The first thing I noticed were the splashes of 42Bright Reddish VioletMagenta used on the Oriental Pearl TV Tower. The second thing I noticed was the clever use of Technic parts to re-create the twisting form of the Shanghai Tower. It’s also hard to ignore the overall pleasing composition of the buildings included in this skyline set; rising from the shortest buildings on the left to the tallest buildings on the far right.

The set was available for purchase early on December 2, 2017 at the LEGO Store in Shanghai, before the global launch on January 1, 2018. This is the largest set in the Skyline series. While this set has about the same number of pieces as #21028 New York City, Shanghai Skyline set has a larger base and a more complex design. It is comparable in complexity to #21034 London, even though that set contains just 468 pieces. This was one of the most interesting models in the Skyline series to assemble. Each of the buildings is assembled in sequence, with most of them being assembled as sub-assemblies which are attached to the base using several different clever building techniques. As is the case with all of the sets in the Skyline series, you start by assembling the base. The base is 36-studs wide—the same width as the London Skyline. That’s the four studs wider than most of the other sets in the series. Like many of the larger models in the series, a central section is up to 8 studs deep, with the ends matching the typical four-stud depth.

Two things surprised me about the base… I was surprised by the round section which extends from the back of the model—this is the first model in the skyline series to have a curved base. I was also intrigued by the large number of nonstandard attachments built into the base. This includes a similar use of 1×1 clip, horizontal (part #4085) to the way it is used in #21014 Villa Savoye, and a new technique involving two of 1×2 handle, side (part #48336).

The area along the waterfront is called The Bund, which literally means Embankment. This historic area contains a lot of historic buildings, including the two featured in this LEGO Model. The HSBC Building (No. 12) is on the left, and The Customs House (No. 13) is on the right. Both of these iconic buildings were effectively re-created using LEGO despite their small scale. The Longhua Temple is not very big, which is why it is re-created using just 8 LEGO bricks. Behind the temple, we see a diminutive pagoda built using alternating red 1×1 round plate (part 4073), and black 1×1 plate (part 3024). The choice of 21Bright RedRed and 26Black is a good match for both of these buildings. Just behind the two buildings comprising The Bund, we find a taller tower. The Radisson Blu Hotel is a simple looking building which was completed in 2005. The LEGO model is assembled using clever SNOT techniques, and includes a round section on the top which is the rotating restaurant. A bar sticking out of the bottom of the building is used to attach it to clips in the base of the model. Radisson Blu Hotel Shanghai New World, as seen from back of model. I was especially impressed with how beautifully the round platform is integrated with the base of the model. Triangular shapes are nto easy to build using LEGO pieces, and I think this is a really clever solution. Unfortunately, the three diagonal legs are not load bearing, but they look good!

While a great source for the newly released Double Jumper (part 34103 – 1×3 w/ two studs) element, this is my least favorite building in the set. The overall form is fairly accurate, but I don’t love how the angled walls are approximated using a stair-stepped technique. It’s also quite frankly the least fun building in the set to assemble. The 102Medium Blue color which is used for this building looks really good in the finished model, but it’s not especially accurate to the building which is has a dark bluish glass exterior.

The tallest building in the city, Shanghai Tower was completed in 2015. The 127 story building features an unusual twisted appearance; each floor is rotated less than a degree from the floor beneath it. In the real building, each floor is a rounded equilateral triangle. For the LEGO model, Technic 3×3 Thin Liftarm, D-shape (part 32249) is used to approximate the cross-sectional shape of real building. Flexible LEGO Elements are used to achieve the twisted shape.

This set isn’t a great part pack since architecture sets contain a lot of small parts, and this set is fairly expensive at 0.10$ per piece. Nonetheless, the set has a nice variety of diverse parts and a few parts worth highlighting because they are new, rare, or in an exclusive color.

Most notably, this was one of the first sets to include the new Double Jumper (part 34103 – 1×3 w/ two studs) piece. You get four in 194Medium Stone GreyLight Bluish Gray in the set, but that color is available in four other sets already. You also get a whopping 32 of them in 102Medium Blue, and this is the only set where you can get that color.

Some of the new & unique parts in this set.

Also, the 3×3 Radar Dish (part 43898) is only available in 42Bright Reddish VioletMagenta in this set, and you get five of them. Lastly, you get four of the very versatile new part 1×2 Rounded plate w/ open studs (35480) in 5Brick YellowTan. One other rare/expensive part is Bionicle 1 x 3 Tooth w/ Axle Hole (part 41669) in 199Dark Stone GreyDark Bluish Gray – This is one of two new sets to include this relatively common part in this very common color.

The model uses several clever building techniques, most notably how clips are used to attach buildings to the base, and the clever solution to build a curving tower. The set includes several exceptional new elements and includes them in fairly large quantities.

Most importantly, the finished model looks really good. This is the first set in the Skyline series that deserves our top must-have (5/5) rating, due to the excellent build experience and the great finished product. My only reservation is that it is a bit overpriced, so you might want to wait for a sale.

A fantastic model and great building experience—#21039 Shanghai is one of those rare “must-have” sets! It is recommended for anyone who loves LEGO, Architecture, or Travel (even if you haven’t been to Shanghai.) Maybe a set this good will inspire you to visit in the future?

The LEGO Group provided this set for the purposes of this review. The opinions in this article are strictly my own—providing sets for review does not guarantee a positive review. Photos by Tom Alphin unless otherwise noted. Visit the About page for more info about our journalistic standards and affiliate programs.