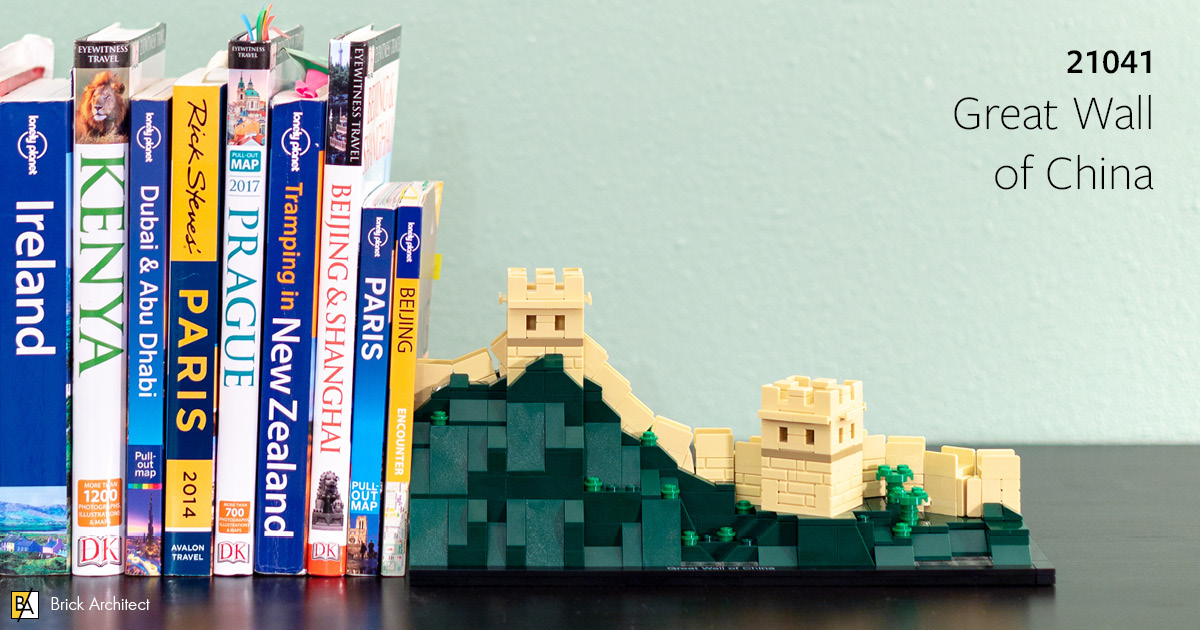 Is it possible to bring one of the largest man-made structures in the world to life using just 551 small plastic bricks? This reviewer is skeptical.

I’m always eager to learn about the latest new additions to the LEGO Architecture series. When #21041 Great Wall of China was announced in April 2018, my first impression was not favorable. It seemed like an odd choice to try to capture something so big and sprawling in a LEGO set, and it seemed likely to fail in that attempt. Spending a little more time examining the images, I could see that the build included some nice angling techniques–both the curving and downward sloping sections of the wall. I also appreciated the restriction of building primarily in only two colors, which gives the site a classic look. So I kept an open mind.

The singular-sounding Great Wall of China is actually a vast number of sections of wall which were built over the course of 2,000 years by many different Dynasties. In the third century BC, Qin Shi Huang became the first emperor of China after conquering the neighboring kingdoms. He connected the existing walls, and added a new one. Walls were added and repaired over the centuries, but the majority of what exists today was built during the Ming Dynasty which spanned 1368-1644. The wall was used as a barrier, but also included thousands of watchtowers, two of which are depicted in the LEGO set.

#21041 Great Wall of China was released on August 1, 2018 (June 2 in Europe). The set contains 551 pieces and retails for $49.99 (49.99€ / £44.99), giving it a price per piece of $0.09, which is a bit less than the line’s average of $0.12 per piece. Fans of the Architecture sets will recognize the usual high-quality black flip-top box and perfect-bound instructions. The first few pages are devoted to the history of the Great Wall, and the information is presented in both English and Chinese. Amusingly, one of the images shows four copies of this set placed end-to-end, showing how easy (and expensive) it would be to extend your model. Great Wall of China stands out from others in the Architecture line in one way: it comes with two title tiles, one in English and one in Chinese. The instructions tell you to choose one or the other, however, as you’ll soon see, this model doesn’t really have a front or a back, so I used one tile on each side.

As with all Architecture sets, the build begins with the black base. What’s different this time is that, instead of using only rectangular plates, this base uses four 3×6 Wedge Plates (parts 54383/54384) at each end. By removing the outer pair of wedge plates, along with the tiles that hold them together, you can connect two or more copies of the set by putting them right next to one another.

There is no other Architecture set that includes so much of the landscape surrounding the building itself. (#21005 Fallingwater is the only one that comes close.) These hills are what give the sections of the Wall depicted here its flow. That being said, two-thirds of the instructions pass before you begin to build the Wall itself. While most of the landscape is built using 141Earth GreenDark Green, The model uses varying colors for interior structure keep these early steps from being too much of a slog.

While building the rolling green hills upon which the Wall will sit, you’ll quickly notice that nearly every one of the hill’s contours is symmetrical from front to back. This is especially evident on the higher of the two hills. Given that this is the one part of the scene that is not man-made, I find it odd and disappointing that there isn’t more variation in the build. It’s especially evident if you place two copies of the set end-to-end to make a longer wall. Clever building techniques are used to position the watchtower at an angle.

The lower hill includes the design feature that will allow the bottom watchtower to sit at an angle. A 1×2 Plate with Towball on Side (part 14417) is sandwiched with other 1×2 pieces including a 1×2 Plate with Handle on Side – Closed Ends (Part 48336). The towball points up, and the handle points down where it clicks into two previously placed 1×1 Tile with Clip (part 15712).

Aerial view of the base.

A few Transparent (Trans Clear) 1×2 Tiles (part 35386) are placed around the bases of the hills, but I’m not sure what they are supposed to be. Some of the photos of the Great Wall that are included in the instruction book show the valleys surrounding the Wall shrouded in fog. Perhaps that’s what the designer intended these pieces to represent, but they don’t really read that way.

Constructing the watchtowers and ramparts consists of many repetitive sub-builds, though the novelty of draping them over the landscape made up for any boredom I might have experienced. Vertical curves are achieved with 1×2 Plates with Horizontal Clips (Part 60470b) connected to 1×2 Plates with Handle on Side – Closed Ends (part 48336), while horizontal curves simply use 1×4 Hinge Plates (part 2429c01). Texture is added with 1×2 Masonry Bricks (part 98283). The groove that was added to tiles in 1976 is used as a design element here, with the 1×1 Tiles (part 3070b) that top the watchtowers bringing even more texture to the build.

The curves that are built into the Wall do lead to some gaps in the structure. Some gaps are filled with 1x2x2/3 Slopes (part 85984), but they aren’t quite up to the job. This isn’t that surprising; despite the introduction of curved and angled pieces, it will likely always be difficult to recreate certain things in LEGO.

Oddly, the illustration of the finished build on the last page of the instructions shows the title tile on the opposite side from what is shown in the photographs of the finished set. Both images are from the same viewpoint, but the photograph shows the tile on the side closest to us, the illustration shows it behind the Wall. Maybe that’s a subtle way of saying it doesn’t really matter which side you display.

The inclusion of so much surrounding landscape means this set contains more substantial bricks than is typical of this line, with the 2x2x3 Slope (part 3684c) and 2×6 Brick (part 2456) being the biggest pieces. As mentioned previously, the set includes two printed 1×8 Tiles with the set name in both English and Chinese.

There are no brand-new parts in this set, however the landscape gives us several common slopes in 141Earth GreenDark Green for the first time.

As I mentioned earlier, I don’t think a structure that spans thousands of miles really works as a LEGO set. While the Great Wall is a historically-important piece of architecture, I’m not sure it compares favorably to more architecturally focused models like #21019 Eiffel Tower or 21029 Buckingham Palace.

That said, LEGO Architecture completists will definitely want to get this set, and it is a good source for new slopes in 141Earth GreenDark Green. For all of these reasons, I give this set a ‘Good’ rating (3/5 stars). I appreciate The LEGO Group’s desire to turn this important piece of world history into a set, but ultimately, it didn’t quite work for me.

How do you feel about this entry in the Architecture series—did it fall short of your expectations, too? If you decide to buy #21041 Great Wall of China, please consider using our referral links, it helps.

The LEGO Group provided this set for the purposes of this review. The opinions in this article are strictly my own—providing sets for review does not guarantee a positive review. Photos in this article by Michael Kindness unless otherwise noted. Visit the About page for more info about our journalistic standards and affiliate programs.