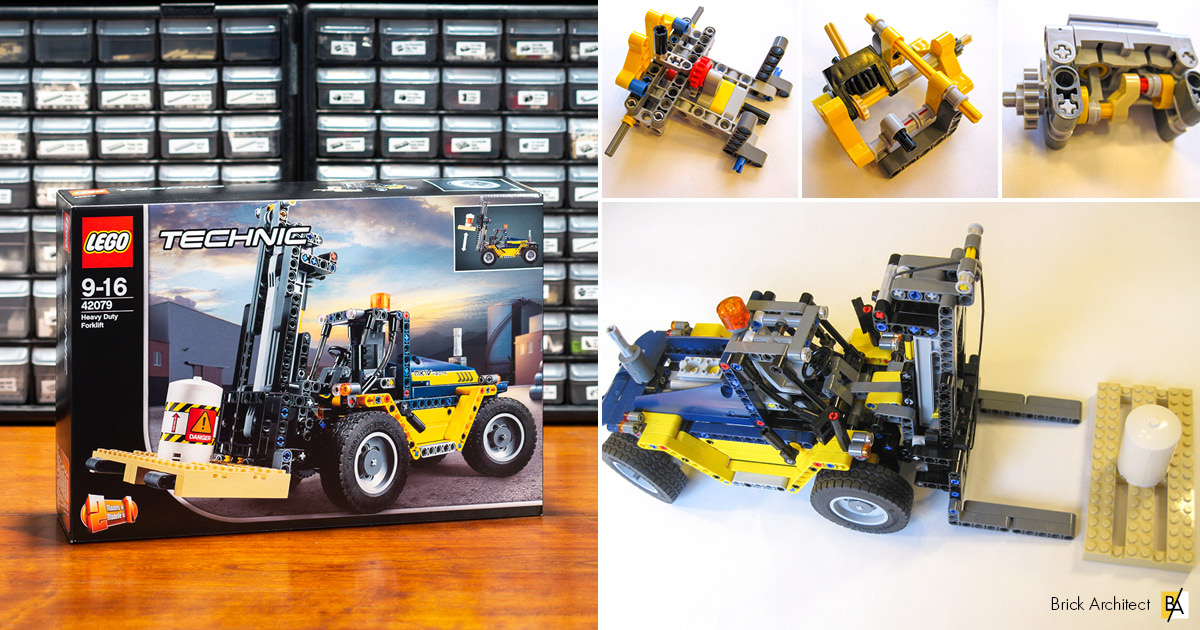 When LEGO Technic started in 1977, one of the first four sets was a forklift. Over the years, there have been nine different forklifts, but the most recent was released in 2005 so it’s about time for a new one! Let’s see if this new version does justice to 41 years of Technic innovation.

It’s great to see a new forklift. Judging by the box art, we have separately-controlled tilting and lifting of the fork, rear steering, and a two-cylinder fake engine. That’s a decent list of functions for a relatively small Technic model. Oh yes, and a brick-built pallet and a drum of hazardous waste to lift! I’m interested to see how these functions are achieved using the latest parts, and more importantly how well they work. Based on the box images, I’m not so excited about the aesthetics of the model, but perhaps I’ll like it better in real life. The color scheme (yellow and dark blue) matches that of #42055 Bucket Wheel Excavator from two years ago.

We jump straight in with this assembly, which will be integral to the two main functions. The universal joints will transfer power to the fork for raising and lowering, while simultaneously allowing it to be tilted backward. The universal joint on the right of the picture is fixed at quite a sharp angle, close to the limit of its functionality. (More on that later). A universal joint is used to power both functions.

The build process is highly modular. Lots of little units to be constructed and then slotted in. This makes for a fun building experience. It is never too repetitive, and there are plenty of “what does this bit do?” moments to keep things interesting.

Lots of small sub-assemblies in this set!

About half way through the instruction manual and the functions of the chassis are mostly complete. There is a front differential driving the fake engine at the rear, and rack-less rear wheel steering. The gear train running from behind the seat to the protruding axle on the right will control the lifting of the fork. There is a four-bar linkage controlled from the just under the seat to allow the tilting of the fork. Over the next few pages we add structural and aesthetic details to the chassis. In many Technic sets it’s all over when the wheels go on, but in this case we still have the fun of constructing the actual fork mechanism to look forward to! The fork itself turns out to be one of the more interesting parts of the model. It is raised and lowered via the 1L worm gear and sliding gear rack parts that were introduced in the last few years. Moreover, there is a lovely string and pulley system that doubles the vertical range of motion. All this is done very elegantly with a minimum of parts, and it works very well. Final model is ready to pick-up the pallet.

Sure enough, the final model does look nicer in real life than on the box. It is solid and sturdy, and modern-looking. Let’s take a look at the functions!

Raising and lowering generally works well, with a good range of travel, although as with any manually operated worm drive system, it is a bit slow to operate. My only slight complaint is that the knob feels quite rough to turn. It never actually jams, but there is noticeable sticking. I believe this is because of the sharp angle of one of the universal joints. The tilting function uses a four-bar linkage. This is a mechanism where Technic designers have really demonstrated their skill over the years, and this one is no exception. When the lever is pulled back, the fork locks into the “tilted back” position, so that the load stays on the forks and doesn’t slide off. Pallet raised in the air.

All this makes for a pleasantly playable and quite realistic model. It’s easy and fun to lift the supplied pallet and deposit it somewhere else.

There are no new parts in this set, but there are a few new colors for existing parts (shared with other 2018 sets). The most exciting for some will be the 5×7 frame (64179) in 26Black (two of them in this set). This is a very useful part, and it’s great to finally have it in the ultimate neutral color. In addition, we get plenty of 140Earth BlueDark Blue parts, some of them previously seen only in the rare set #41999. There is also a curious recoloring of the 3L axle pin (11214) in 21Bright RedRed, and the pin-with-pin-hole (15100) in 23Bright BlueBlue – it’s not clear whether these will be the new standard colors. At 11.8 cents per part with no power functions, the set is a little on the expensive side. The stickers (which I did not apply) provide a few cosmetic details for the vehicle and warning label for the drum of toxic waste!

This is a very nice smaller-midsize Technic set. It has a good list of realistic functions, the mechanisms are interesting and elegant, and they work well, giving a satisfying play experience. It would be a great first set for someone new to Technic, while the serious collector will likely want to pick one up. It makes a decent parts-pack, although perhaps a little expensive. I rate it “Highly Recommended” (4/5).

If you like what you see, give #42079 Heavy Duty Forklift a try. Be sure to read our reviews of all four Summer 2018 Technic sets, and see which one you like most!

The LEGO Group provided this set for the purposes of this review. The opinions in this article are strictly my own—providing sets for review does not guarantee a positive review. Photos in this article are by Alexander Holroyd unless otherwise noted. Visit the About page for more info about our journalistic standards and affiliate programs.