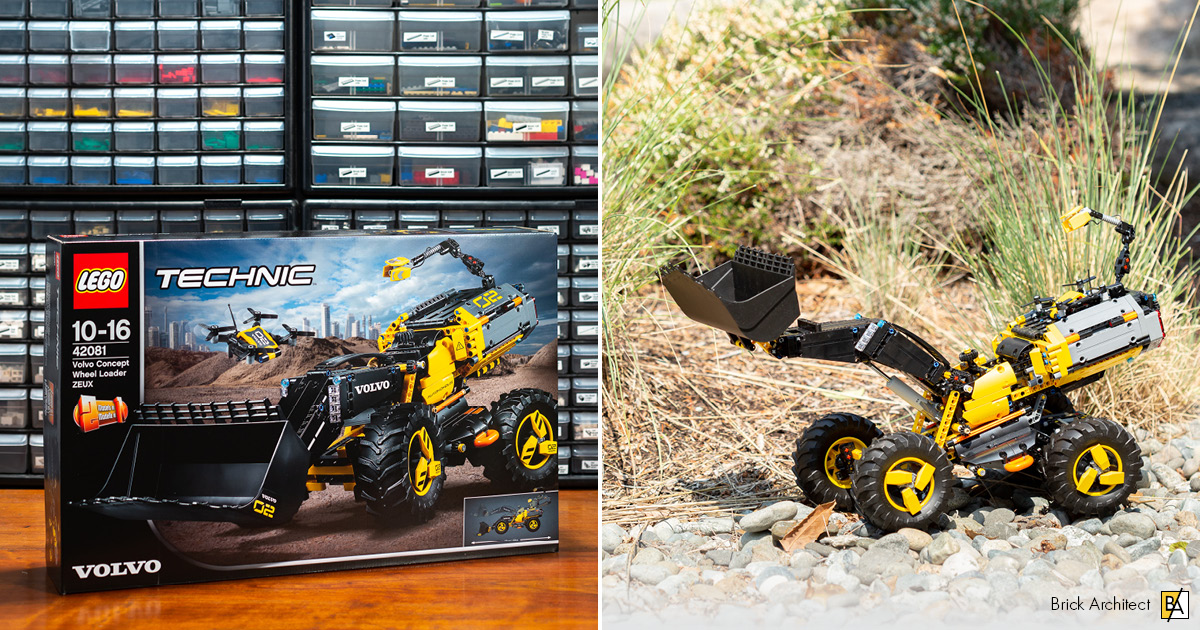 Volvo’s Construction Equipment team has partnered with LEGO designers to explore the future of autonomous industrial machinery. Does this weird bug-shaped vehicle give us a window into the future of heavy industry, or does it lack a satisfying bite? I’ll be honest, I think this is a weird looking vehicle. The LEGO model has the rough feel of a prototype, because that’s what it is—It’s based on a prototype vehicle designed by Volvo to explore the future of Autonomous construction equipment. By removing the need to hold a human driver in a prominent location where they have good visibility, a lot of different shapes are possible. The back of the box shows that instructions for a second model are available online.

Technic fans may already know that this isn’t the first Volvo-branded Wheel Loader… It was preceded by #42030 Remote-controlled Volvo L350F Wheel Loader, which was released in 2014, and is based on a production vehicle instead of a concept design. The earlier set is significantly larger with 1636 pieces, includes remote-controlled power functions, and a much higher $249.99 price.

The set comes in a really large box, and it’s clear that the finished model is going to be pretty big, even though it only includes 1167 pieces. The box highlights the five mechanical functions: steering, Shovel Angle, Arm Angle, Torso bend, and Counterbalance weight position. They are all controlled manually; sadly there are no Power Functions, Pneumatics, or Remote Control features in the set. It seems like a weird set, but I began the build with an open-mind.

Because the parts do not come in numbered bags, I organized the parts on sorting trays.

I was shocked to see that a large set like this didn’t include multiple numbered bags. I took my time organizing my build space to help me find parts more quickly, but I still spent several minutes looking for the right part more than once. I will admit that numbered bags are something of a luxury, but they make the build experience more pleasant and I’m surprised they weren’t used in this set. We start by assembling the central section of the model.

It doesn’t take long to see that this is going to be a pretty large vehicle. We can already see how front and rear steering are linked with a universal joint, and how the model is designed to bend to increase front to rear clearance. The front and rear assemblies are attached in this step.

All four wheels are turned by an axle that runs the length of the vehicle, which turns a gear in both the front and back which pushes the wheels left and right. It is a pretty simple mechanical design which does not take very long to assemble. The model starts to take shape when we add the digger arm.

Adding the digger arm and shovel is the second-to-last major step. This section is covered with a mix of Technic panel elements and some LEGO System parts for lights and other details. The counterweight is assembled separately.

Assembling the counterweight was probably the least interesting section of the build process. The core function is simple; a worm gear causes the weight to move forward and backwards when rotated.It feels overly complicated, with a lot of parts and detail hidden behind the exterior panels.

In the final step, the wheels are assembled along with their yellow accent panels. These details are superfluous to the vehicle’s function, but I think these angular wheel protectors are one of the most compelling design elements in the entire vehicle—the yellow color really stands out to give the vehicle a high-tech personality.

While the set may not have the Power Functions or Remote-control features I would have wished for, it does have five mechanical functions which work smoothly. Each are controlled independently by rotating an exposed gear.

The four wheels can be turned using a gear on top.

Steering for both the front and real wheels is controlled by rotating a gear on the top of the model. The steering works fairly well, although the weight of the model creates a fair amount of friction. You might be tempted (like I was) to try and lift the model using this gear, but the gear and axle will pop off.

The angle of the shovel is controlled by the topmost gear.

The angle of the Shovel Arm is controlled by the middle of three gears.

Not only can we scoop up some dirt, but we can raise the differ arm out of the way of obstacles using the second of three gears. It rotates smoothly across the whole range of angles.

The model bends to create more clearance using the bottom-most of three gears.

Now we get into the two weirder mechanical functions. The first of these functions changes the angle of the vehicle’s torso between the front and rear wheels. In practice, this would both change the balance of the load and counterweight, as well as increasing ground clearance from the front to rear axle. What’s not clear is when the vehicle would actually do this, since it is not mechanically linked to other functions like the counterweight or digger angle.

The counterweight can be extended by rotating a gear on the back of the vehicle.

Lastly, we have the ability to extend the counterweight on the back of the model. In practice, it would be extended to keep the vehicle balanced from front to back when scooping up a big load, or retracted after dumping out the load. Again, I would have liked to see a mechanical linkage between digging and the counterweight, so as to better express how these features would relate to one another in practice.

There are no brand new parts in this set. Because Black and Yellow are two of the most common colors, there are only two examples of new colors for existing parts.

I will admit that I was a bit skeptical about this set from the beginning. The model looks a bit strange, and I was worried that the lack of Power Functions or RC functionality would make it less fun to play with.

In the end, the set matched my relatively low expectations. The build process is somewhat interesting, and the five mechanical functions work well even if they must be individually controlled. I would have liked to see a linkage between the digging function and the counterweight, such that the counterweight moves in response to the digging action, rather than requiring that you control both functions individually.

Since #42081 Volvo Concept Wheel Loader ZEUX is based on an experimental autonomous vehicle, I had hoped to get a deeper glimpse into how automation will change construction equipment, but the conceptual elements weren’t ultimately all that engaging. As just one example, It is hard to imagine how the quadrocopter can actually take-off and land, since the arm-mounted camera is in the way.

The set isn’t terrible, but it isn’t great either, earning our “Acceptable” rating of 2/5 stars. In addition to offering some entertainment while assembling the main model, it may also be a good parts pack if you can find it on sale for a good discount.

#42081 Volvo Concept Wheel Loader ZEUX is based on an ambitious goal—exploring the autonomous future of construction equipment. Between the weird appearance, somewhat awkward play features, and high price, it is not one of our favorites. Be sure to also read our review of #42079 Heavy Duty Forklift.

The LEGO Group provided this set for the purposes of this review. The opinions in this article are strictly my own—providing sets for review does not guarantee a positive review. Photos in this artible by Tom Alphin unless otherwise noted. Visit the About page for more info about our journalistic standards and affiliate programs.