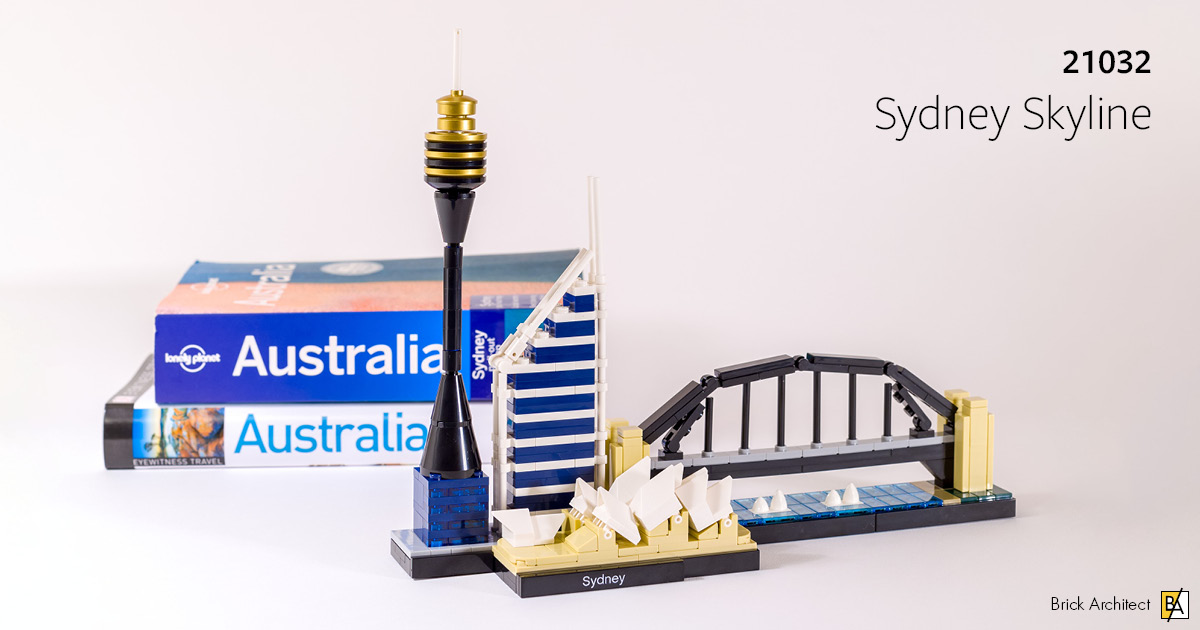 Having just visited Australia for the first time, I was excited to see how well the Sydney Skyline set captures the feel of the harbor city, and it’s iconic Opera House.

One of my greatest joys as a LEGO enthusiast is to build official LEGO Architecture sets of the places I’ve visited. Having just returned from visiting Australia for the first time, I was thrilled to finally build set #21032 Sydney Skyline, and share lots of photos from my trip with you.

This is Brick Architect’s second review looking at retired LEGO Architecture sets. That’s why we’re using a shorter review format that focuses on the most important details of the completed model, with less detail about the build process. 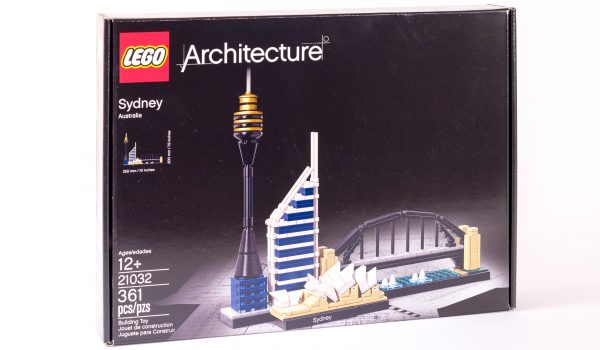 The Sydney skyline set is comprised of just four structures, but is immediately recognizable. This is thanks to the Sydney Opera House which is frequently photographed with the Sydney Harbor Bridge behind it.

The two other buildings are less famous to a global audience, but will be familiar to anyone who has visited the city. On the far left we have the slender Sydney Tower Eye, followed by Deutsche Bank building with it’s unique triangular roofline.

In this short review, we will learn more about these four structures, and take a closer look at how each was re-created using LEGO. While this isn’t a step-by-step analysis of the build process, we will look at each building in the order that they are assembled in the set.

After assembling the base of the model, the first stucture that we build is the massive Sydney Harbor Bridge. The bridge took nine years to build, and opened in 1932. With a span of 503 m (1,650 ft) between the four supporting Pylons. With 8 lanes for traffic (plus pedestrian and cycle paths), it was the widest long-span bridge for 80 years!

Visitors can walk across the bridge free-of-charge, and enjoy beautifult views of the harbor and Sydney Opera House. Other options include climbing 200 stairs to the top of one of the four pylons ($15 AUD), or climbing the arch itself in the costly BridgeClimb (From $268 AUD).

Another way to enjoy the bridge is from below, with fantastic views from almost anywhere in the harbor area including the Sydney Opera House, McMahons Point, and Luna Park to name a few. Even better is an inexpensive harbour cruise aboard the tan and white Transport NSW ferries that will take you almost anywhere you want to go. (from $6.01 AUD with Opal Card).

The LEGO re-creation of the bridge is pretty basic. It uses hinged elements and tiles to re-create the main arch, with Bar 3L and Bar 4L representing the vertical support cables. I would have liked to see the LEGO model more closely match the engineering of the real bridge with the cables attached at both the top and bottom, but concede that this would be hard to do at this small scale.

Next, we assemble the Deutsche Bank Place. It’s an iconic building in the cities skyline due to the assymetrical triangular top, although it’s not a very interesting building to visit as it’s closed to the public beyond the street-level cafe. It was designed by Starchitect Norman Foster, and completed in 2005. It’s becoming increasingly difficult to see and photograph the building, as taller buildings have been going up around it. 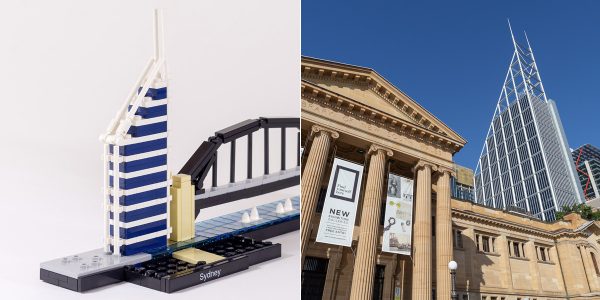 The LEGO model is well done, employing clips and bars to re-create the exposed structural elements of the building. It is definitely a bit of a caricature, as the real building doesn’t have vertical supporting beams extending beyond the ends of the building, but this feels like a fair tradeoff given the scale. It’s instantly regognizable if you are familiar with the real building, which is always a good sign for microscale architectural creations.

Starting from the left, The Sydney Tower Eye is the tallest structure in the city. The 309 m (1,014 ft) tall tower was completed in 1981, and was originally called Centrepoint Tower. The tower and shopping mall beneath was purchased by the Westfield group in 2001, which is why a large Westfield logo appears on the exterior of the four story gold turret near the top of the tower. The gold turret is supported by a black central tower, with a lattice of metallic tubes that connect with the center halfway to the top.

The highest of these four stories is open to the public as a viewing platform. Access to the Sydney Tower Eye is managed by Merlin entertainment (who also runs the LEGOLAND parks), with a entry fee of $29 AUD (about $20). The other floors include a bar, restaurant, and event space. 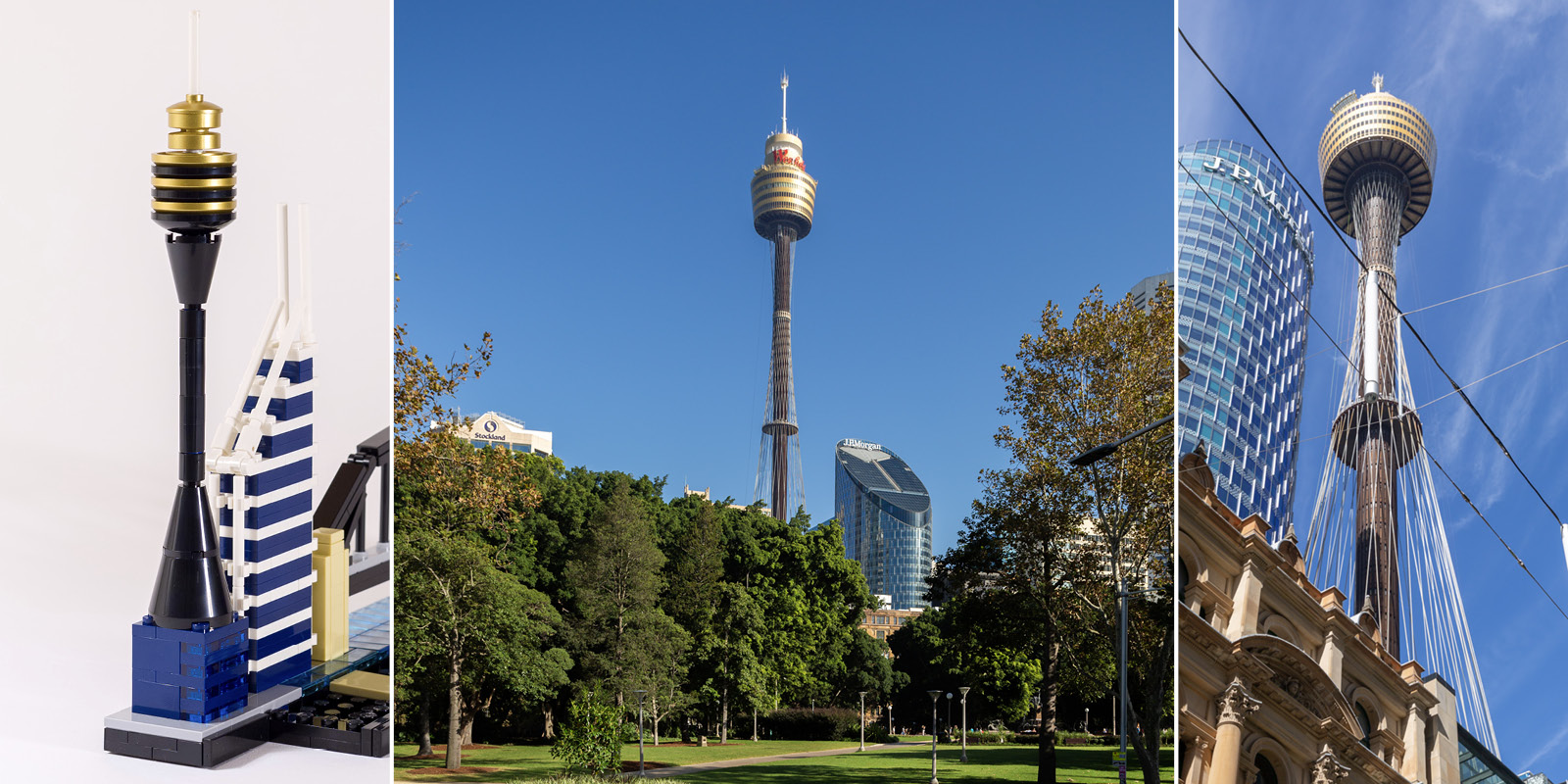 The LEGO version captures the shape of the tower pretty well, but loses the buildings spirit. The real tower looks more like a single slender column, with only a gauzy mesh of metal in the inverted hourglass shape. By using un-decorated black cones and Technic elements, the slender central tower of the real building is lost. Further, the base of the tower is integrated into a large mall complex, so you don’t really see the blue building at the base when you visit it in person. Thankfully, the top of the tower looks pretty good, thanks to several parts in the rare 299Warm Gold Drum LacqueredMetallic Gold color.

Last, but definitely not least, is the Sydney Opera House. Easily one of the most iconic buildings in the world, the building was designed by a relatively unknown Danish architect Jørn Utzon and completed in 1973. As the story goes, his design had been disqualified due to concerns about complexity of construction, but influential Finnish-American architect Eero Saarinen was drawn to the design and convinced the rest of the judges that it was the only truly inspired design.

The judges were right to be concerned; The design was so complex that the team had to invent new techniques in Architectural Modeling and Structural Engineering to build it, including one of the first uses of Computers in the design process. It also led to massive budget over-runs, with Utzon leaving the project in the face of public backlash.

Interiors of the Sydney Opera House.

Ultimately, The building is a triumph; a massive sculpture that can be seen from almost anywhere in the city. In practical terms, it really is a sculpture. The Concert Hall and Opera Houses were designed by another architect, and they sit inside the concrete shells like a building within a building. While they are well designed theatres, they can’t compete with the majesty of the shell-shaped building that surrounds them. (The $40 AUD tour is highly recommended.)

In the LEGO model, the Opera House sits in front of the rest of the buildings, which is accurate to the real geography. It is built on Bennelong Point, which juts into the harbor east of the southern terminus of the Sydney Harbor Bridge. The most obvious part they got right includes having the correct number of shells and the way that the two halls are stacked in front of each other.

Unfortunately, they weren’t able to capture the fact that the Concert Hall is slightly larger than the Opera House. When you visit the Opera House, you will also learn that the two halls are not parallel like in the model, but are set about 20 degrees apart. Re-creating such a sculptural form perfectly using the limited selection of LEGO bricks isn’t a realistic goal, so my hope was that they captured the building’s essence in this tiny model. Thankfully, I think they did a pretty good job despite some unfortunate tradeoffs.

As one of the smaller models in the Skyline series, it’s not surprising that the building techniques are fairly straightforward.

Other than the 1×8 Tile with Sydney printed on it, there aren’t very many unique parts in this set:

I will admit that I wasn’t impressed when I first saw the set. The Opera House looked blocky rather than curvy, the bridge looked a bit simplistic, and the other two buildings weren’t familiar to me. Aside from the triangular roofline of the Deutsche Bank building, it didn’t look like very interesting building techniques were employed in the model. 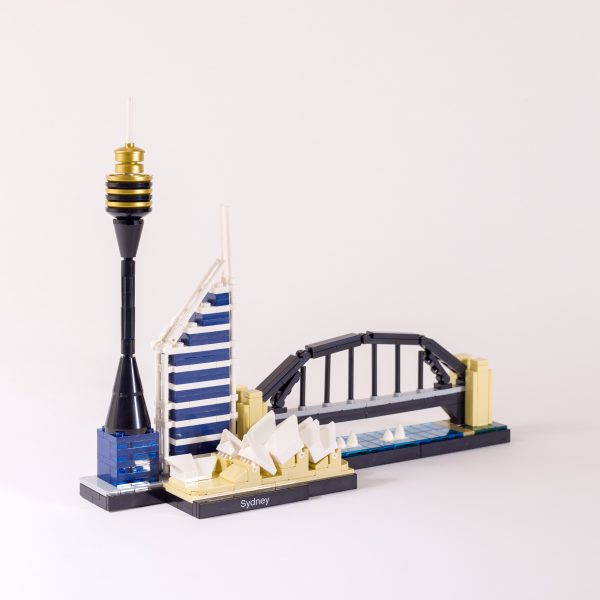 While all of my intitial reservations proved to be true, the completed model is actually pretty satisfying, especially given the lower price point. The main reason for the warmer response to the finished model comes from spending time in the city, and learning that the model does an above average job of evoking the feel of the city. Given this mix of boring building techniques but a nice looking finished model, the set earns our Good (3/5 star) rating.

If you have visited Sydney, or it’s on your bucket list, be sure to add retired set #21032 Sydney Skyline to your collection while it remains available for under 50$.
The LEGO Group provided this set for the purposes of this review. The opinions in this article are strictly my own—providing sets for review does not guarantee a positive review. Photos in this article are by Tom Alphin unless otherwise noted. Photos of Sydney were taken between May 18 and June 12, 2019. Visit the About page for more info about our journalistic standards and affiliate programs.