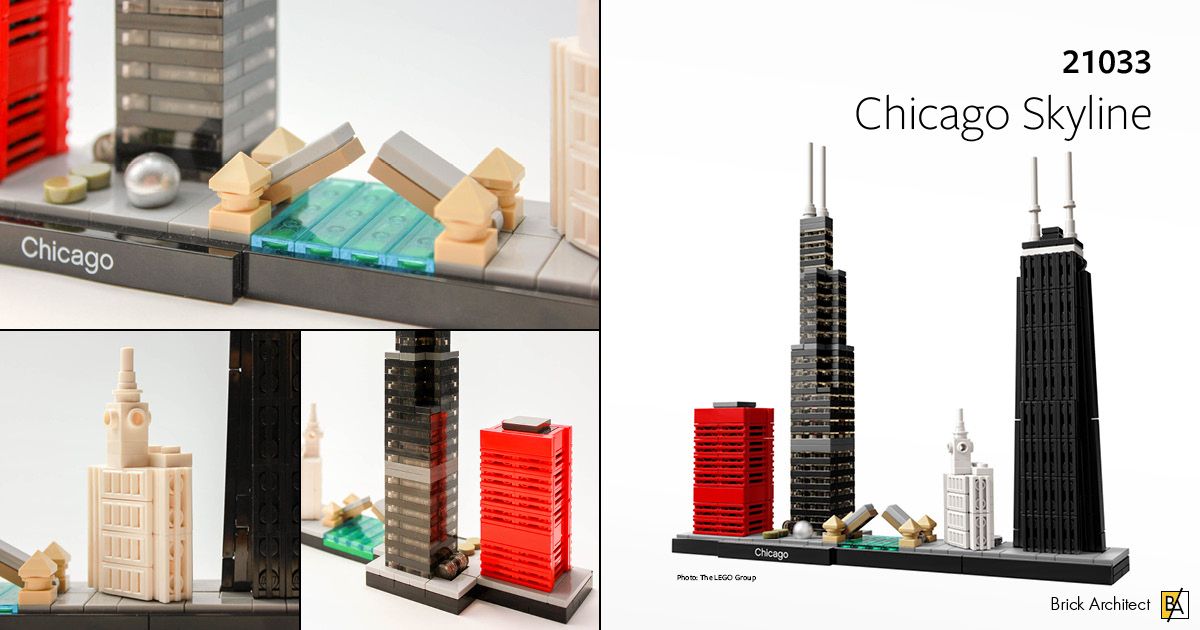 This is the first of several reviews looking at retired LEGO Architecture sets. We’re trying a shorter review format that focuses on the most important details. 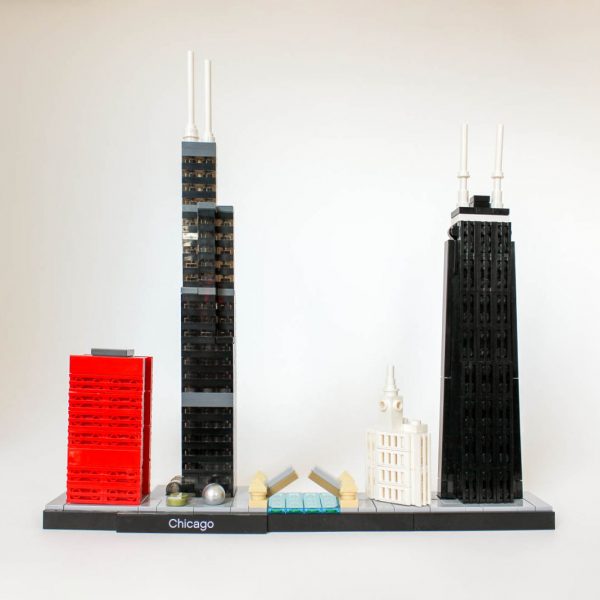 Let’s take a closer look at the six landmarks featured in the finished model.

Starting from the left side of the model, the first building is Big Red. Unfortunately, its representation is also the most problematic. While there is no LEGO color that would perfectly match the reddish-orange façade of this building, the 21Bright RedRed that is used here is a little jarring. Substituting 38Dark Orange would bring it closer to real life, but maybe they decided that no other color could live up to the building’s name. 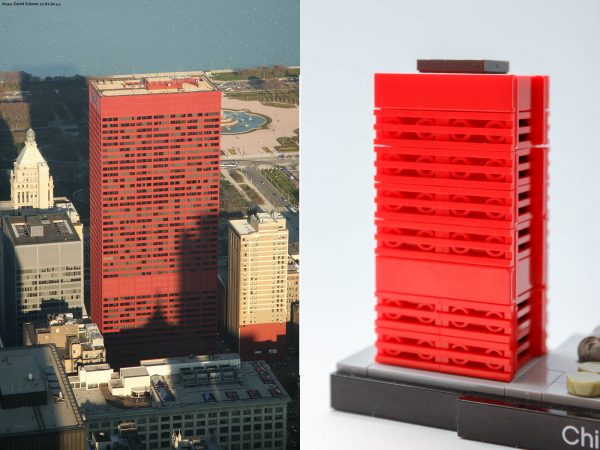 Formerly known as the Sears Tower, this building was previously released in two nearly identical LEGO sets under both names (#21000-1 Sears Tower, and #21000-2 Willis Tower). The new version included in this set is much more nuanced, with alternating 26Black and Transparent Brown (Trans Black) plates mimicking the building’s bronze-tinted windows. This updated version is great, especially considering its small scale. 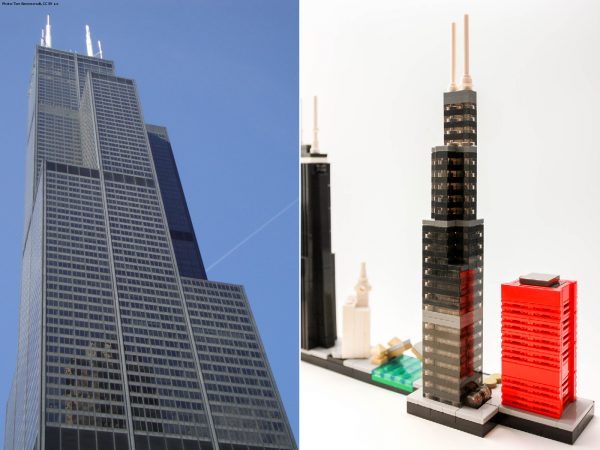 Cloud Gate and the DuSable Bridge

Using a metallic silver Technic Ball Joint to represent the Cloud Gate sculpture – nicknamed “The Bean” – was probably the easiest decision the designer of this set had to make. It doesn’t exactly match the sculpture’s curves, but it’s as close as LEGO is going to get at this scale.

Consisting of just sixteen pieces, this representation of the DuSable Bridge had to capture the Beaux Arts style of the original. There’s no way to add more detail to a model of this scale, but it’s still a bit of a disappointment.

The small 1White LEGO version of this building (the smallest building in this set) is covered with wonderful texture, thanks to 1×2 Grille Tiles (part 2412) and 1×2×⅔ Slopes with Lattice, or “Cheese Graters” (part 61409). I was a little disappointed to read in the instruction booklet that The Wrigley Building actually consists of two towers, though I understand why only one could be included here. 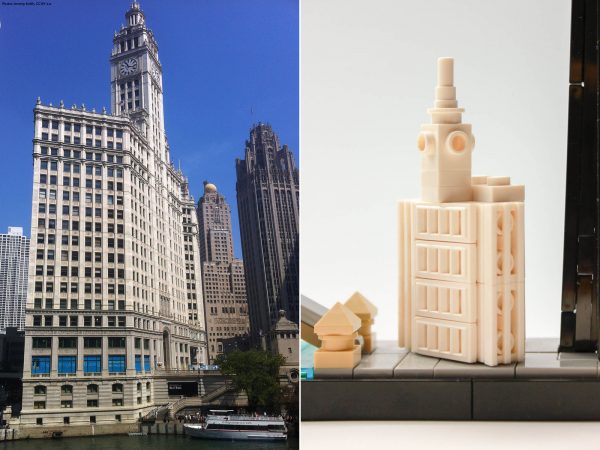 “Big John,” as it’s known to Chicagoans, is done well, and includes the building’s sloping sides (discussed further in the next section), ring of lights around the top, and its texture, mostly. The “X” design that runs up the building is not recreated here, but it’s hard to imagine how that would have been accomplished. 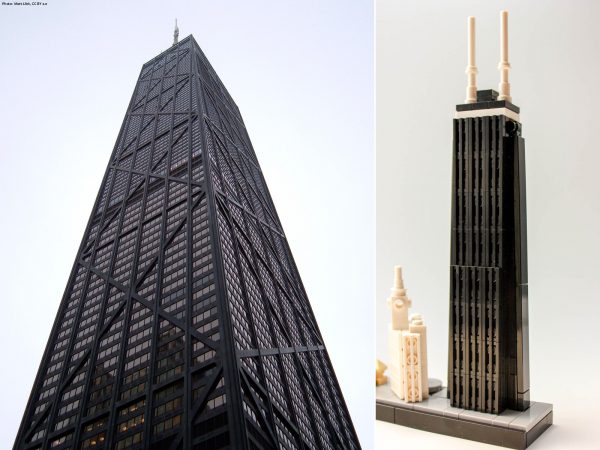 Like most of the recent sets in the Architecture series, the set features creative parts usage and several noteworthy techniques.

A few of my favorite techniques featured in this model:

Other than the 1×8 Tile with Chicago printed on it, there are only 4 elements that have appeared in fewer than 10 sets:

When I first saw this set, I liked the mix of building styles, and could tell that the sloping Hancock Center would use unique construction. All of those elements lived up to my expectations, but I found some negatives that I wasn’t expecting, like the bright color of Big Red, and the lackluster DuSable Bridge.

If you’re a resident of Chicago, or want to commemorate a trip to the city by building the LEGO set, it’s worth tracking down. Otherwise, it’s a nice set that earns our Good (3/5 stars) rating, but not one that needs to be in every LEGO Architecture fan’s collection.

Love Chicago? You’ll definitely want to add #21033 Chicago Skyline to your collection!
The LEGO Group provided this set for the purposes of this review. The opinions in this article are strictly my own—providing sets for review does not guarantee a positive review. Photos in this article are by Michael Kindness unless otherwise noted. Visit the About page for more info about our journalistic standards and affiliate programs.