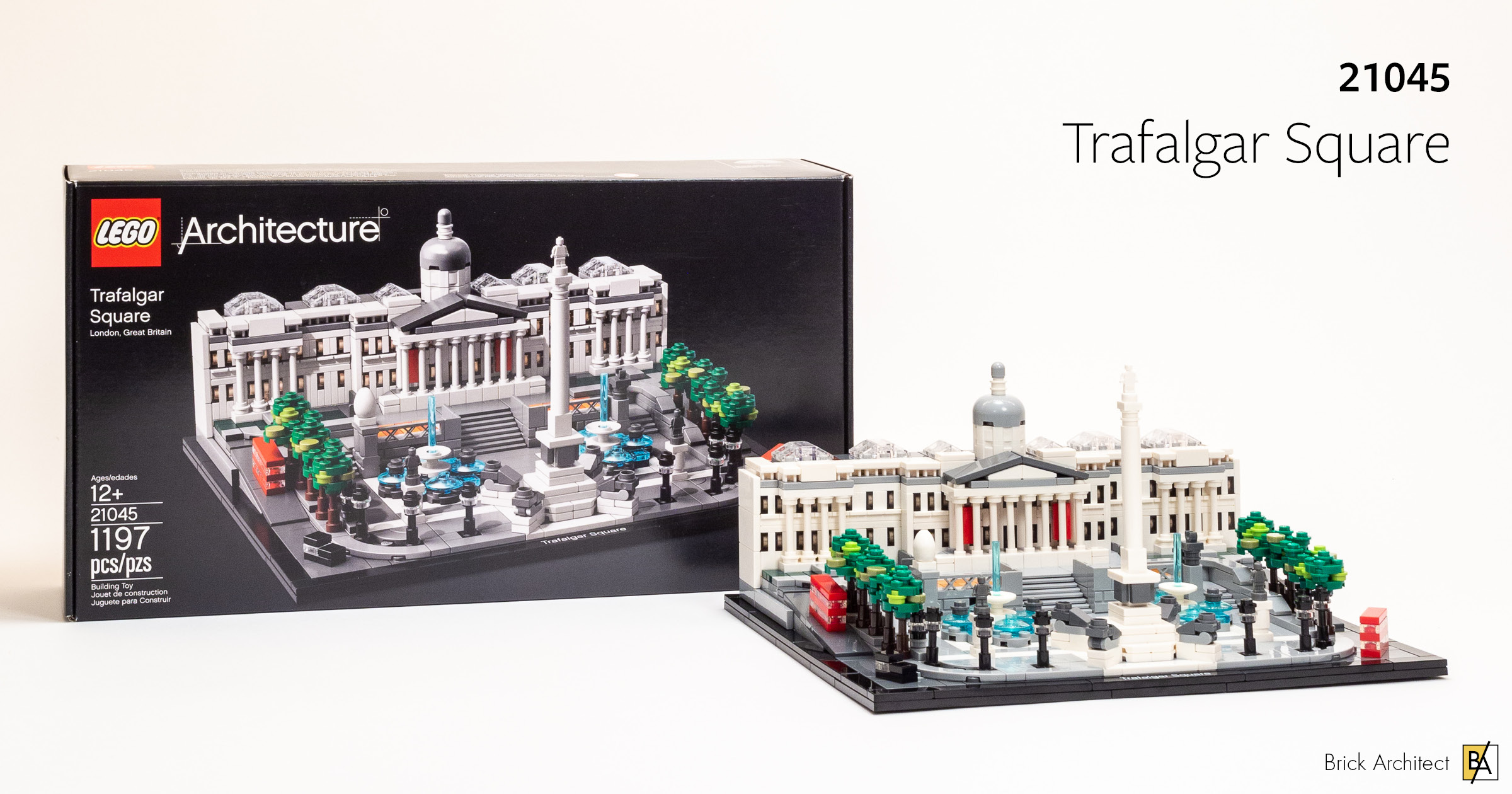 Does a set containing an entire plaza belong in the LEGO Architecture series? Lord Business says yes (since there’s a LEGO Store nearby), but I’m not sure…

I want to say that I was excited to learn that Trafalgar Square was being added to the LEGO Architecture series, but I’m afraid my initial impression was pretty negative. It felt like they hid the primary architectural elements behind statues and trees!

While Nelson’s column (and the four lions surrounding it) is a pretty famous landmark, the National Gallery behind it is less iconic and it is not an particularly celebrated example of Neoclassical architecture.

To be fair, there were a few things that I was excited to see, or at least try… For one, this is the first official set to use an obscure AFOL trick using carefully stacked panels to achieve tiny steps that are just ½ as thick as a standard plate. I was also cautiously optimistic to see if the addition of some topography in the form of ramps leading up to the building would add or detract to the architecture itself.

The set includes four stages, with multiple numbered bags for each stage of the building process. This is typical for larger sets—it helps you find the parts more quickly since at the beginning of each stage you have fewer than 300 loose parts on the table.

Numbered bags make it easier to assemble the model in four stages.

It’s hard to tell, but the two bags marked for stage 1 look bigger than the other three. As anyone who has built sets in the LEGO Architecture series already knows, we begin by assembling a sturdy base with the familiar black tile border and nameplate.

Completed base at the end of stage 1.

The similarity to previous sets ends here, as this is one of the most complex bases I’ve ever seen. It includes intentional holes, mounting points for hinged elements, and exposed smooth elements at the lowest level of the structure. We also see some SNOT elements that suggest elements which will extend over the 1-stud border. I wouldn’t say that the building the base was especially interesting, but I am intrigued to see how these unusual voids and attachment points will be leveraged later. 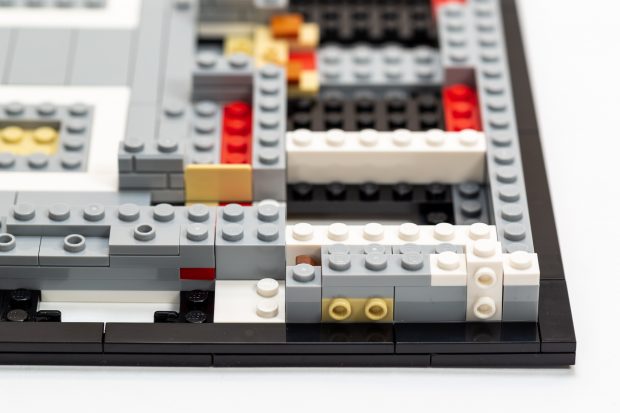 The base is quite complicated, with several clips and outward facing studs.

The second stage of the build jumps right into an advanced building technique that I was excited to see for the first time in an official LEGO set. We build ½ plate tall steps by carefully stacking 1×2 panels placed on there sides. This results in a no-stud connection, locked in place by the topmost panel.

Rather than attach the topmost panel using a standard 1×2 Brick w/ Studs 1 side, they used a 1×2 Technic Brick with two ½ Pins. It is a little known fact that technic pins are a small fraction of a plate higher than the outward-facing pins on a typical SNOT brick. This tiny offset must have been chosen to allow the stack of elements to clear an obstacle. I believe that they were trying to clear the stud of the jumper used to prevent the lower panels from sliding around, but I’m not entirely sure.

The difference in height is 0.12mm (or 3/80 of a plate thick.) This is documented in Stressing The Elements, a presentation by Jamie Berard on illegal buidling techniques. 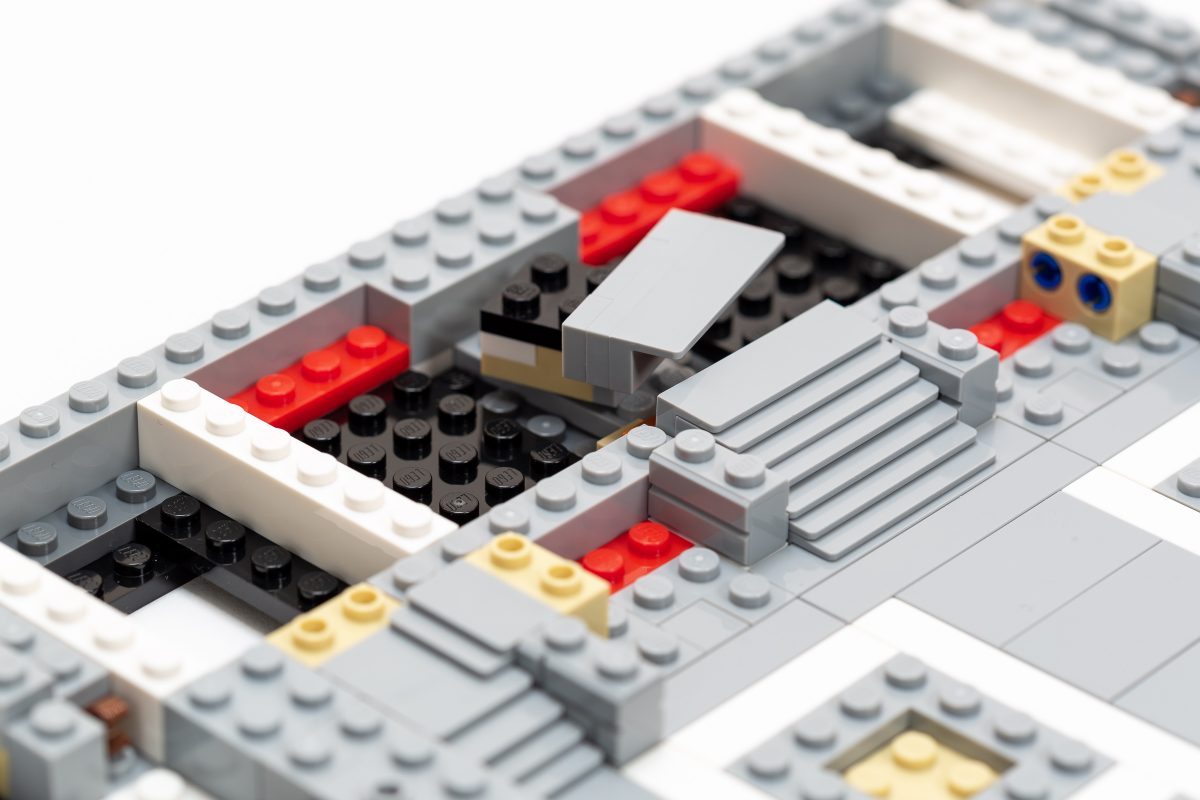 The ½ plate tall stairs are created using panels placed on their sides and locked into place using SNOT techniques.

This stage goes on to include more of the building interior than I would have expected, including several pieces of “art” (printed tiles) attached to the walls. We wrap up this stage by adding additional tile details to the exterior landscaping and grounds, including a time consuming grid of 1×1 tiles in alternating 38Dark Orange and 312Medium NougatMedium Dark Flesh. 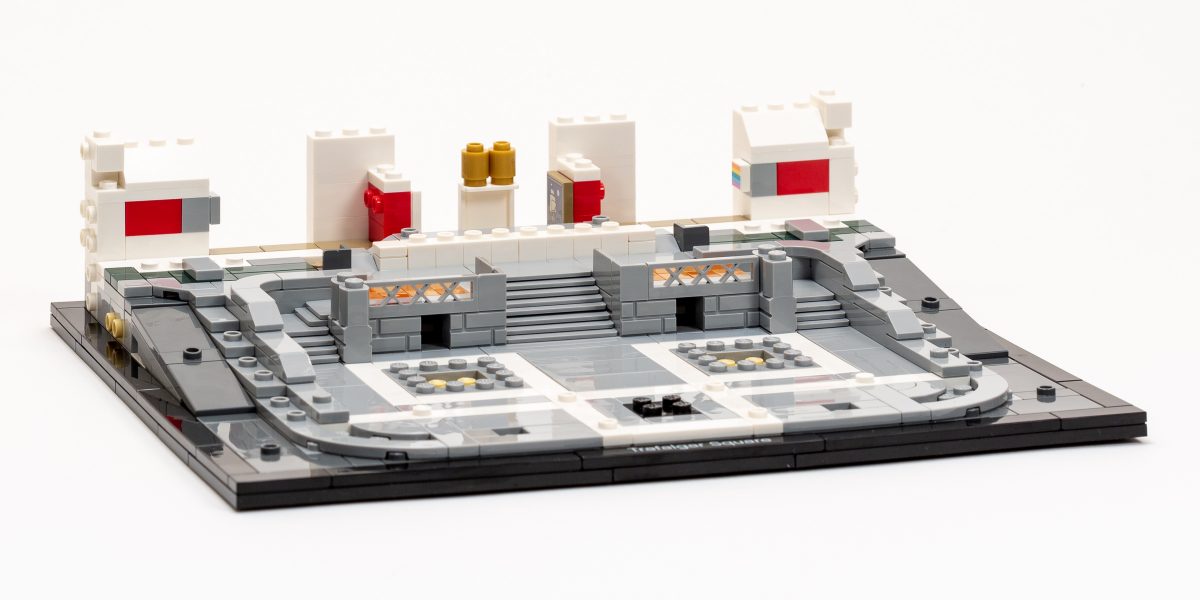 Progress by the end of stage 2.

Aligning all of the precise parts, and carefully stacking pieces resulted in a longer build time for this stage than I would have expected.

I was eager to start this stage of the model, as we finally get to build some architecture. I was pleasantly surprised by the complex building techniques that are employed in this stage. 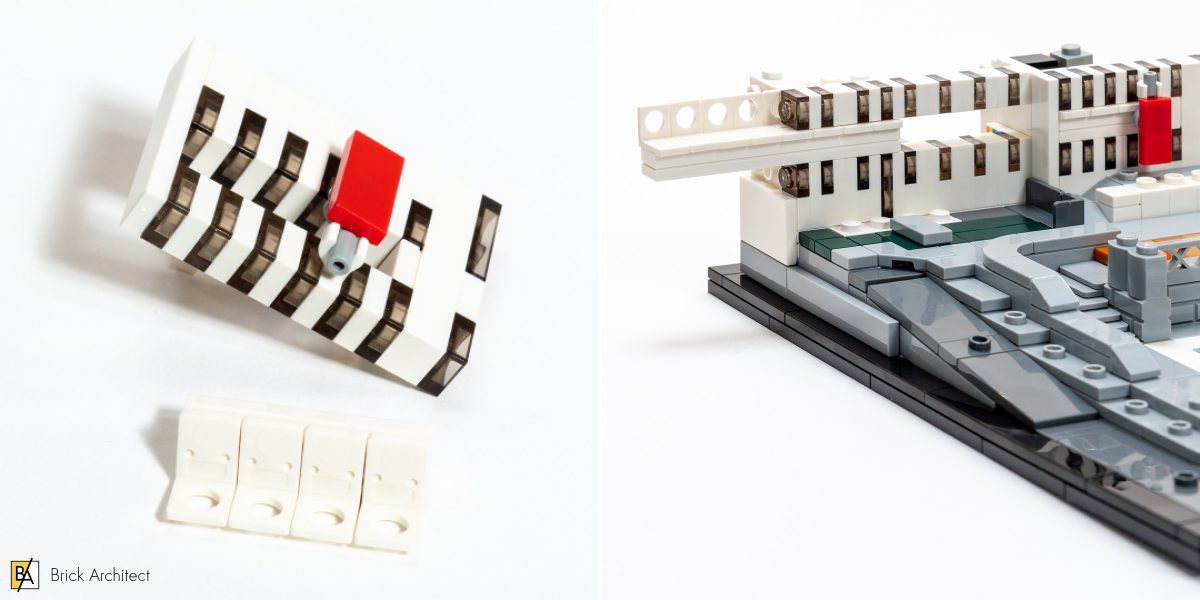 The model achieves a half-plate window sill beneath the upper row of windows. Impressively, this half-plate technique utilizes a different part than the steps in the bottom of the model, the Minifig Bracket (part 28974), which is more commonly used to attach accessories to the back of a minifigure torso. In this instance, they are attached to a plate and a tile, and carefully slotted into a gap the width of one brick (or 2 ½ plates thick.)

Minifig Bracket element was redesigned in 2019 to be exactly ½ Plate thick. This difference was first noticed by New Elementary in their review of 21318 Treehouse. 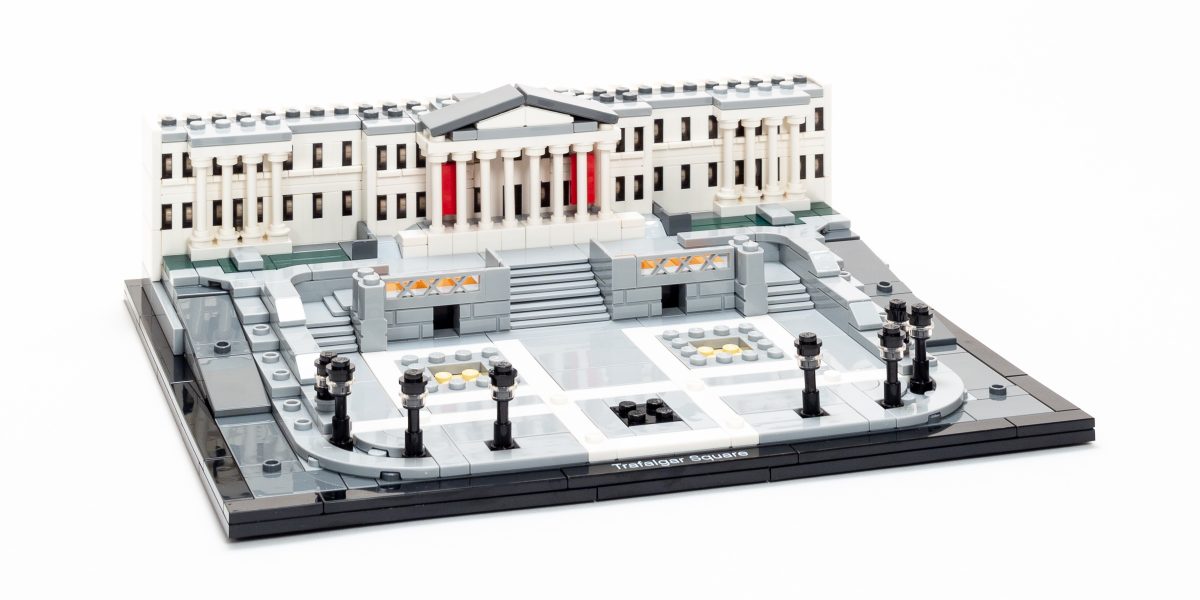 Progress at the end of stage 3.

The columns are similar to what we saw in the Lincoln Memorial set, and we wrap up this stage by creating removeable panels to cover the back of the model, while allowing you easily reveal the art gallery hidden within at any time. We also see some interesting techniques to achieve the angled roof above the pediment, which uses technic elements to allow an arbitrary angle.

Having nearly completed the “architectural” aspects of the build, I hoped that the last bag would quickly add the finishing touches to the roof and finish the project. There was a bit more to the architectural aspects than I had expected, including a nicely detailed cornice below the roofline created using 1×1 clips. This is a nice detail, similar to how 1×1 round plates were used in #21022 Lincoln Memorial, or the bottom of 1×2 hinges were used on the #21036 Arc de Triomphe. 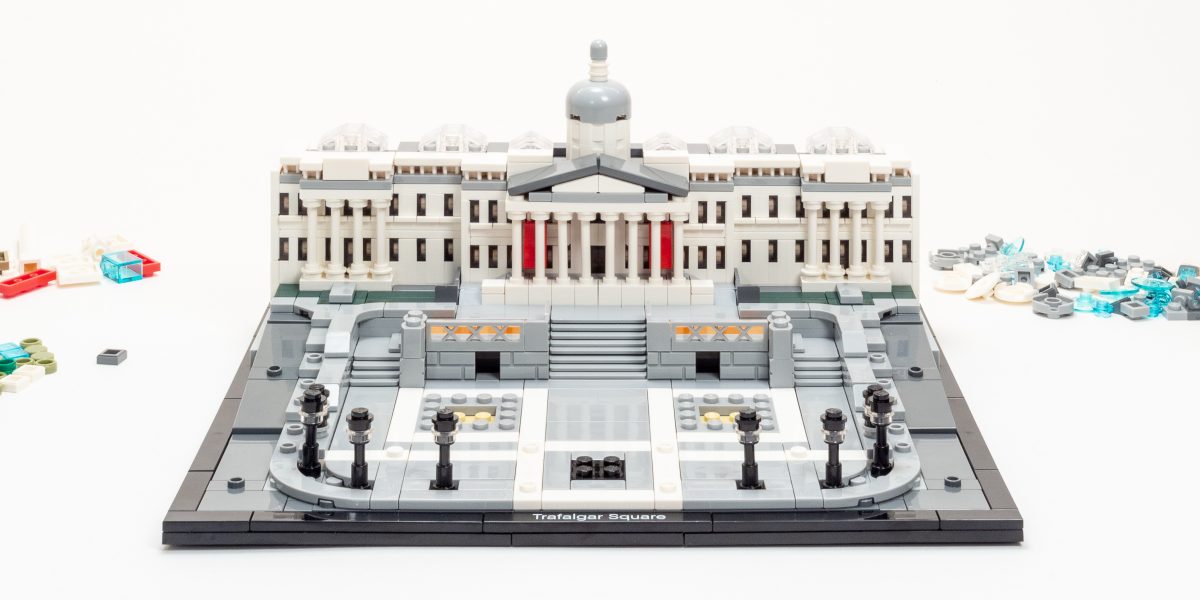 The roof completes the architectural elements of this project.

The roof is completed by the addition of six skylights, and a tall domed roof in the center, which cleverly utilizes Technic elements to achieve an arbirtary angle. 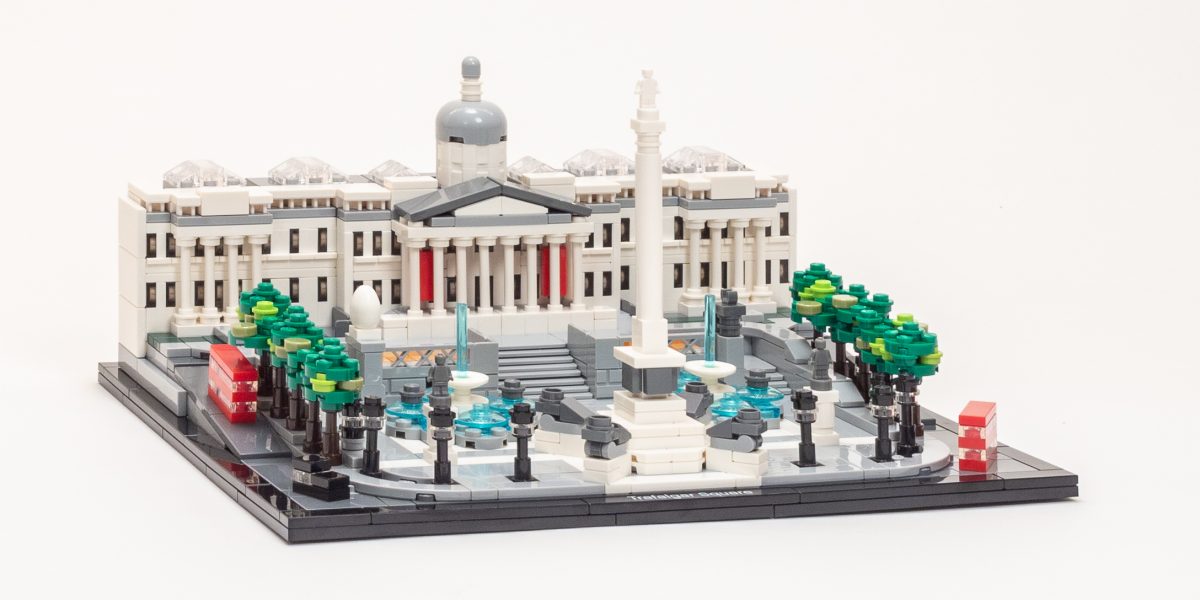 After completing the building, we build two fountains using some clever techniques, and Nelson’s Column which is saved for the very last step. Unfortunately, we also have to spend far too much time for my taste assembling two rows of tiny trees. I strongly believe that half as many trees would have captured the feel of Trafalgar Square, while blocking less of the architectural details. Nonetheless, the finished model looks a bit better than I had expected, largely due to my ability to move around the model to see various details which are blocked when viewing a static photo of the completed set. 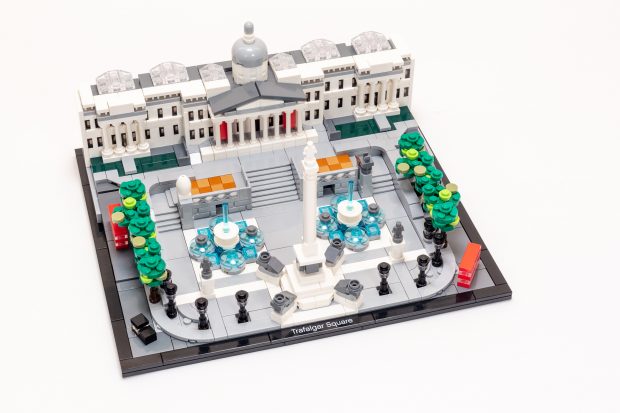 I think the completed model looks better from above.

Here at Brick Architect we take pride in writing honest, and when necessary, critical reviews of LEGO sets. That’s because there are a ton of new sets every year, and we want to help you decide which ones to add to your collection.

I worried that this set would earn a 2/5 star rating due to the overly complex composition and lack of focus on the actual architecture. While I do not love the completed model, it exposes LEGO fans to many creative building techniques that we have never seen in an official LEGO set. This earned my respect, and allows me to give an enthusiastic “Good” (3/5 star) rating to a set that I don’t actually like all that much. 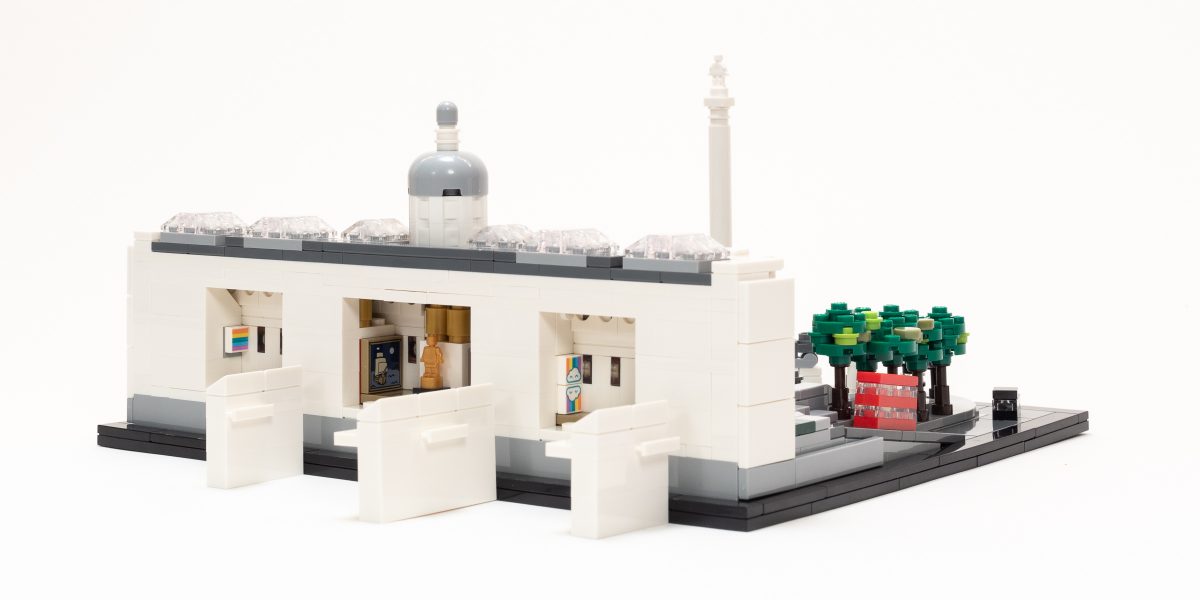 You can visit the art museum by removing three panels.

One other great thing for LEGO Artists is that the set is well priced and includes interesting parts, so there’s no shame in taking it apart when you’re done building it to build something new. 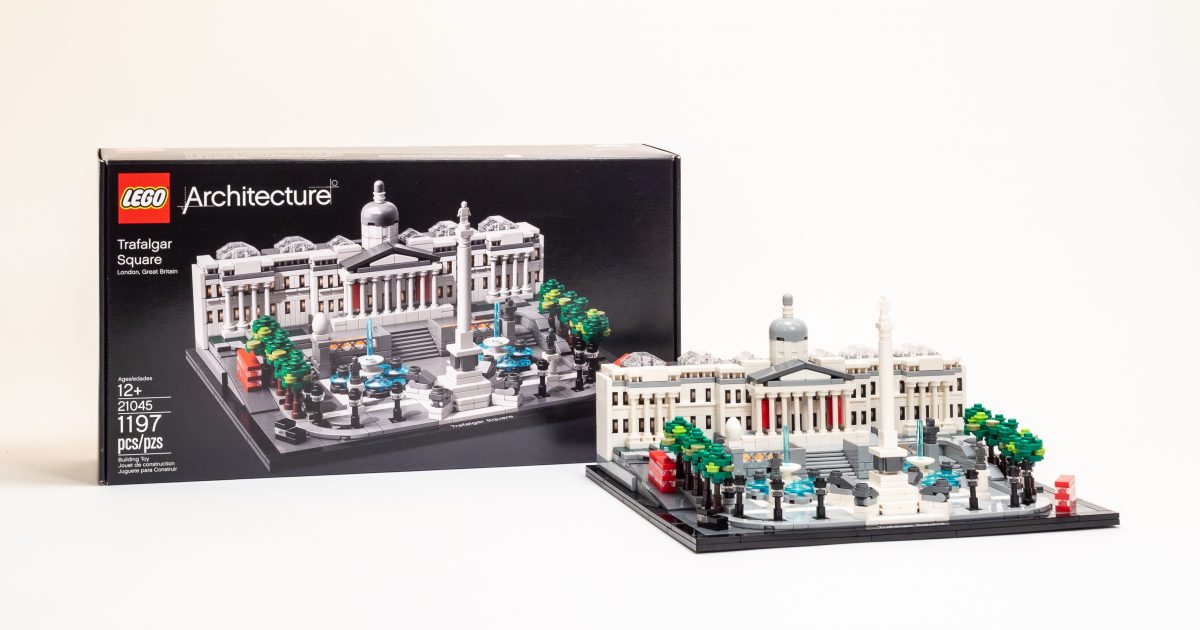 This set might have earned a mixed review, but it offers interesting techniques, great parts, and a good value. If you decide to add #21045 Trafalgar Square to your collection, consider buying it using our affiliate links.
The LEGO Group provided this set for the purposes of this review. The opinions in this article are strictly my own—providing sets for review does not guarantee a positive review. Photos in this article are by Tom Alphin unless otherwise noted. Visit the About page for more info about our journalistic standards and affiliate programs.