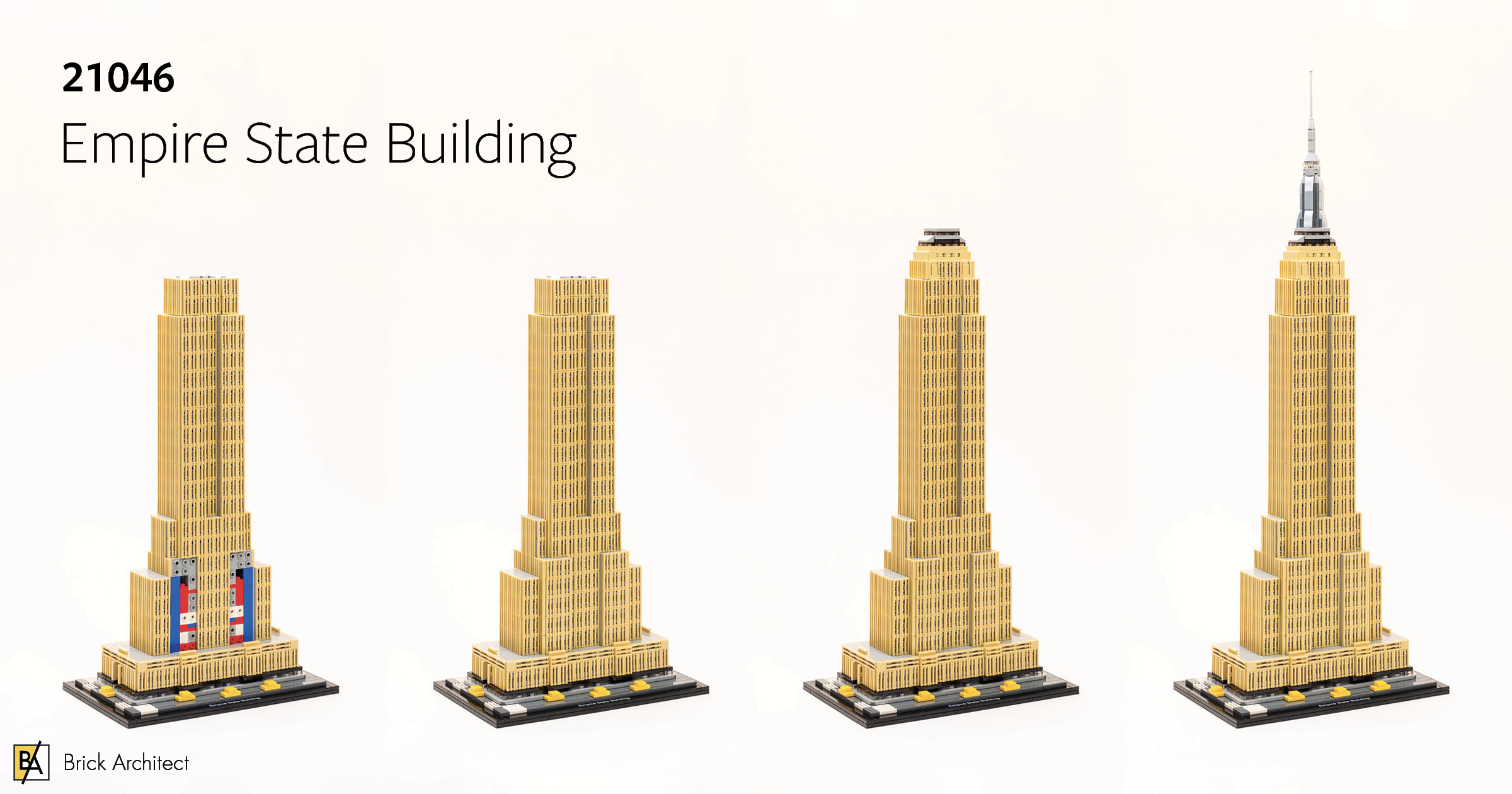 Is this set containing 684 identical parts an exercise in frustration, or a meditative glimpse into the life of the professional LEGO Artist? Let’s find out if you should add this set to your collection!

The newly released Empire State Building immediately caught my attention when it was announced earlier this year. By creating such a large model, the design team was able to more accurately capture the intricate stepped setback design of the real building than in previous attempts. By using hundreds of 1×2 Grille Tiles, the set approaches the level of detail achieved by talented LEGO artists.

I was excited to see if this feels more like past experiences building official LEGO sets, or if it offers a window into the intricate but repetitive world of a professional LEGO Artist.

Immediately after opening the box, I flipped to the back of the book to see just how many 1×2 Grille Tiles were included in the set.

I was shocked to see that the set includes 684 of them, which is more than ⅓ of the 1767 pieces included in the set! (I’ve heard that this is the largest number of the same part ever included in a LEGO Set.) 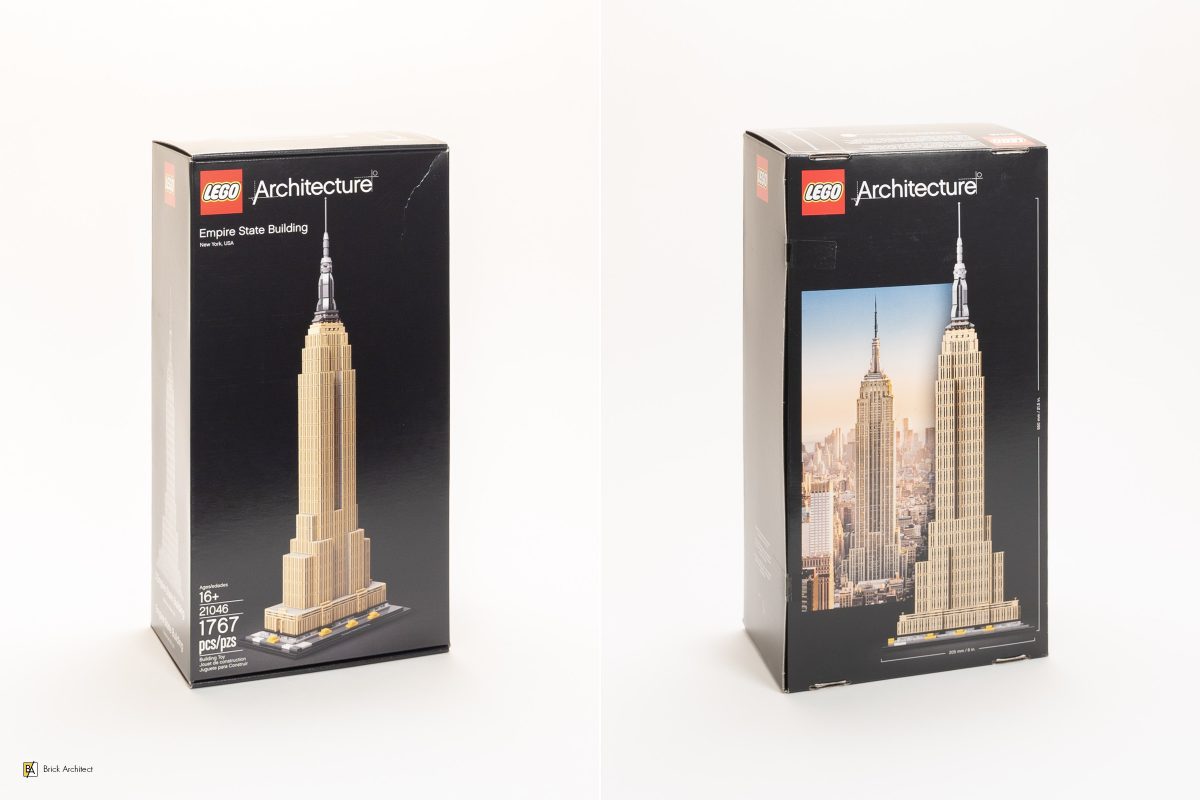 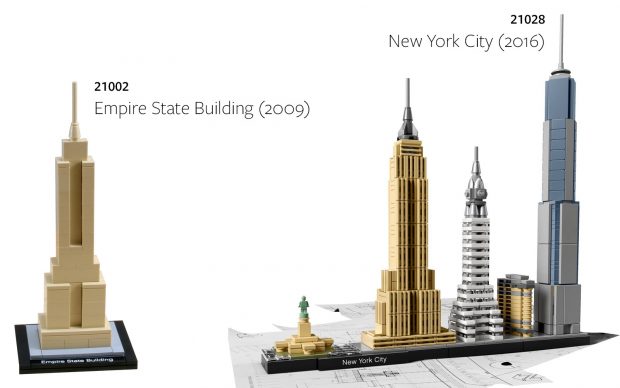 I was excited to get started with this big, intricate-looking model. Since the box included five bag numbers, we will review them one-at-a-time.

The bags are numbered to help assemble the model in 5 stages.

There were two relatively small bags marked with a 1, indicating the first stage of the build process. As is expected for models in the Architecture series, we begin by assembling the base with its iconic black border and printed tile. The base is a bit unusual, in that it embeds four 4×6 tiles with studs on 3 edges. This makes space for a SNOT (Studs not on Top) assembly which we will build later in bag 1.

Building the base of the model.

After assembling the base and ground floor, we get our first glimpse at the SNOT core of this large and complex model. An unusual technique is employed to assemble a rigid 3-stud tall SNOT assembly. Instead of just using a plate to connect 6 brackets, two 2×2 with Technic Pin on bottom are used. This takes advantage of the fact that a Technic Pin is 5/6 the height of a LEGO brick, allowing the bottom of the pin to rest perfectly on the 2×4 Tile beneath it.

This clever sub-assembly uses two 2×2 w/ Pin parts which rest on a 2×4 Tile for support.

You will also find a whimsical detail embedded in the structure’s base—The team hid 8 Metallic Silver Cheese Graters representing escalators. This is purely a treat for the person building the model, as you won’t be able to see them when the model is completed. 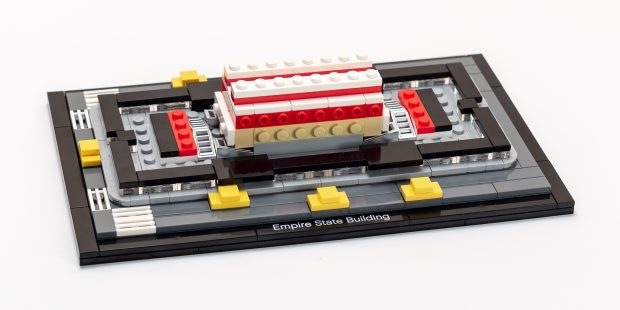 In the second bag, we jump right into more advanced building techniques. We start by adding the exterior panels on the front, back, and sides.

Installing identical front and back assemblies.

After that, we make the central core 3 1/3 bricks taller. This is another SNOT assembly using three different parts with studs on their sides. The front is clad in those increasingly familiar 5Brick YellowTan 1×2 Grille Tiles.

The third bag is the most repetitive section of the build, and the most time consuming. In this step, you will build six very similar modules: the first and last module are slightly different, but the four modules in the middle are identical. 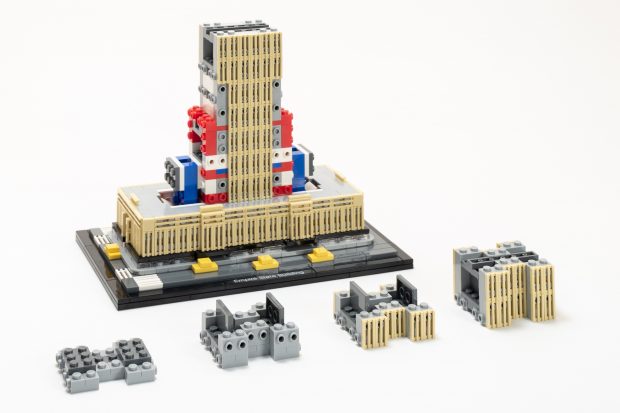 Four identical assemblies will be stacked on the growing central core.

As we saw in the previous bags, these modules were carefully designed to leverage SNOT techniques to work around the unique geometries of the LEGO brick. This includes more sideways 2×3 Tiles that are attached between studs to make the model more stable. Many of the 1×2 grille tiles are attached using just one stud, which makes it harder to ensure that they are all aligned perfectly.

The four identical assemblies are ready to install.

The last module is even weirder, taking advantage of the fact that the 1×5 technic plate with rounded corners is one of the few parts in the system that are 5-studs long. The section wraps up with a set of panels attached to the right and left side of the model using both standard studs, and a 1×4 with Bar which attaches to a hollow stud inside the model. (I’m sure it makes the model stronger, but it feels like the designers are just showing off.)

The last step in Bag 3 connects these panels using both studs and a bar connection.

The fourth bag is also repetitive, but a lot bit quicker. Here, we assemble two sets of two identical modules, which cover the right and left hand side of the building. 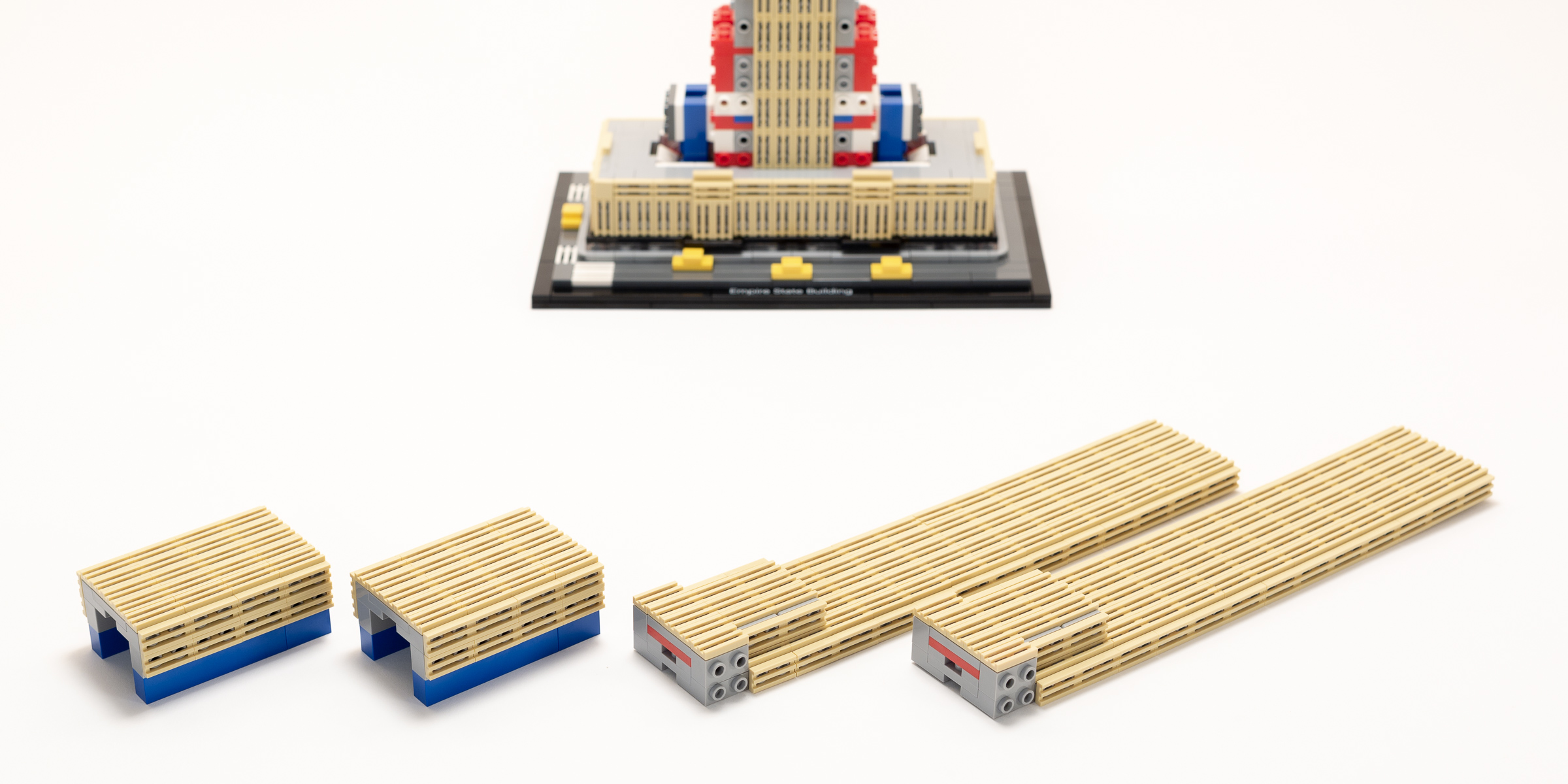 Two assemblies for the sides, and two for the front and back.

The techniques are less advanced than in the previous two steps, but extensive use of SNOT parts remains central to the build process. 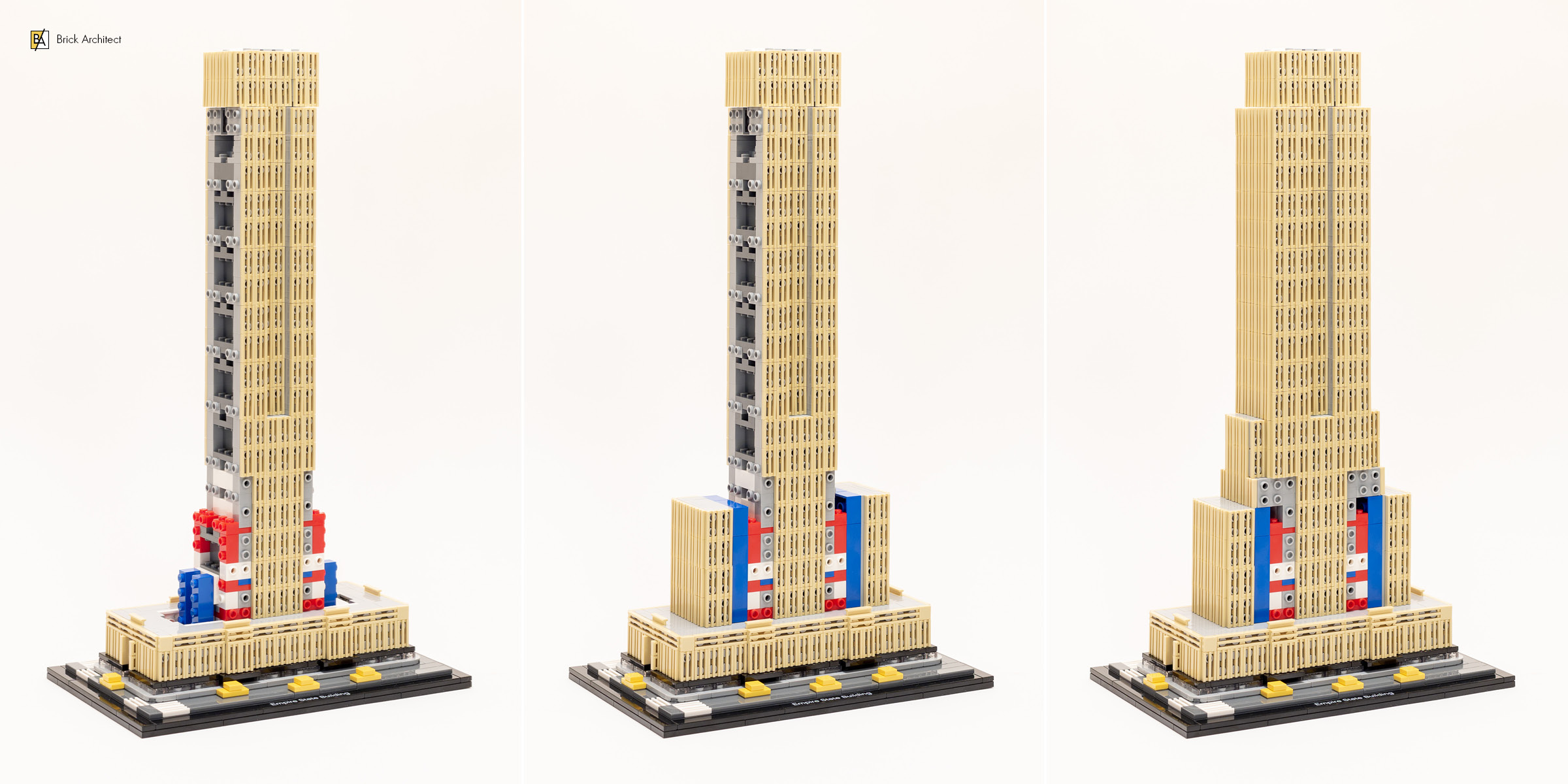 Installing the four assemblies from Bag 4.

The last bag brings the model together nicely. We start by assembling four quick panels to cover the bottom part of the model. These are simple assemblies using basic plates and SNOT elements, and are quickly covered with more 1×2 Grille Tiles.

The remaining stages are fun, quick, and give the model it’s distinctive top. There’s one final set of setbacks for the main building, followed by a section with windows just below the spire. Lastly, we are treated to a beautifully designed spire which uses some drum-lacquered silver parts and clever techniques to good effect.

There aren’t any new parts in this set besides the 1×8 nameplate tile. On closer look, none of the 1767 pieces are particularly expensive on the secondary market. That why I’ve chosen to highlight the ten most common parts instead—this might be a useful parts pack for some builders (especially in Europe where the price-per-part is better than in the United States.)

I’ve mentioned several times how closely this set resembles the larger scale Architecture models frequently created by talented LEGO Artists. I reached out to a few of those artists for their first impressions of the set, even though they haven’t had a chance to build it yet…

All of the LEGO Artists I spoke to were excited about this increased level of detail in an official LEGO Architecture set:

Spencer’s quote in particular stood out to me. It perfectly captures the explosion in enthusiasm for the Architecture Series, and the shift from focusing on the high-level form of the building to capturing more and more of the details.

These quotes set the stage for my closing thoughts about the set. The 2.5 hour build process combines an interesting highly technical central core with less exciting highly repetitive exterior panels. This is very similar to most of the large Architectural models designed by artists like Spencer and Rocco. In fact, the greatest joy in building this set is to gain insight into the complex but repetitive world of the most talented AFOLs and professional LEGO Artists. 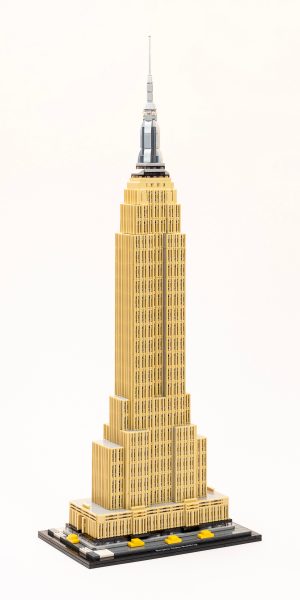 This set is perfect for dedicated fans of the LEGO Architecture theme. Unfortunately, it won’t appeal to many LEGO builders because the build process is too repetitive and the part selection is not very diverse (due to the overabundance of 1×2 Grille Tiles). Nonetheless, #21046 Empire State Building earns an enthusiastic Recommended (4/5 star) rating for fans of the LEGO Architecture theme due to the very high level of detail and interesting building techniques in the central core.

Have you added #21046 Empire State Building to your collection? If so, please let us know what you thought of the set. If not, consider buying it using our affiliate links—it’s an easy way to help support Brick Architect!
The LEGO Group provided this set for the purposes of this review. The opinions in this article are strictly my own—providing sets for review does not guarantee a positive review. Photos in this article are by Tom Alphin unless otherwise noted. Visit the About page for more info about our journalistic standards and affiliate programs.