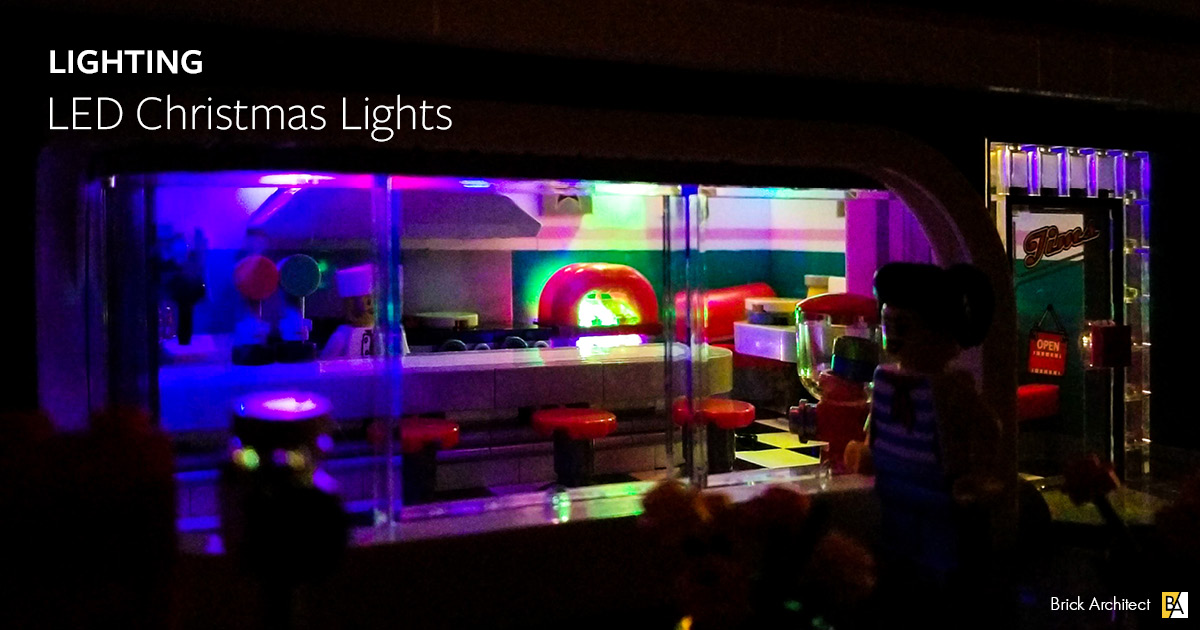 Lighting your LEGO models doesn’t have to cost a fortune. Let’s start by trying the most economical option available: Battery-powered LED Christmas Lights.

This is the first in a series of articles reviewing several products to add lighting to your LEGO Models. In the coming weeks, we will summarize what we’ve learned in a LEGO Lighting Guide (similar to our popular LEGO Storage Guide.)

It’s a lot of fun to build a LEGO set or a custom LEGO creation. Once it’s perfect, you might want to show it off in your home, display it at a LEGO convention, or share photos of your amazing creation online. Lighting is one of the best way to draw attention to your creation and make it stand out.

I realized that I needed to add some lighting when displaying some of my creations at a Christmas event for a local children’s hospital charity where our LUG shows off a Town and Train display. I wanted to try adding inexpensive LED Christmas light strings to a few of my Modulars, so I bought a selection of battery-operated LED light strings in after-christmas sales. Of the strings I purchased, some used ribbon wire and others used normal wires to run power to the lights. 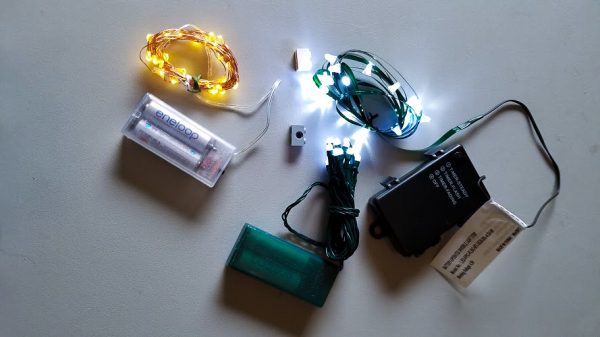 The problem with LED Christmas Lights is that they are not designed for use with LEGO. As you can see, each string has its own battery pack, so if you want to use different types of lighting, or incorporate multiple strings of lights, you need to fit multiple battery boxes inside your LEGO model.

While most products do not offer any lighting effects, some allow the ehitre strand to flash (but who needs an entire string of LEDs flashing in their model?) Some of these strings let you cut the wires to shorten them, but that’s about as far you can go to modify these strings without breaking out a soldering iron. (While I took an electronics class in High School, I don’t really want to cannibalize a string of LEDs.) 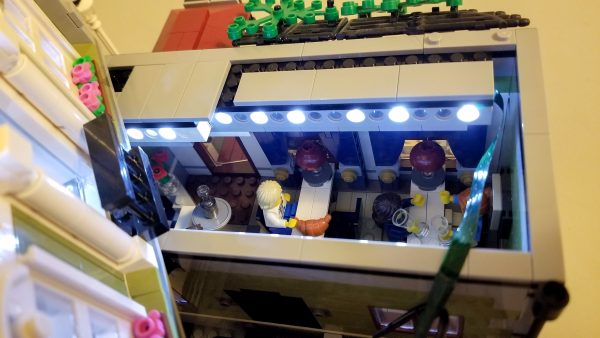 First floor of Parisian Cafe, with ribbon lighting tucked into a groove attached to the ceiling.

If you are planning on buying LED Christmas lights, bring some batteries and a technic piece with you—not all strings fit through a Technic hole. You also need to consider how easily you can bend the wires to fit within your model. Ribbon wiring is nice and thin, so you might be able to fit it between bricks. The ribbon bends nicely in one direction, but it won’t bend at all the other direction. Traditional wiring can be bent in both directions, but is thicker.

With the limitations of your lighting product in mind, you have to figure out how to run the wires through your set, and where to put the battery pack Even though the lights are inexpensive and small, the wiring isn’t as thin as that of LEGO specific light kits from 3rd party sellers.

In the following example, you can see that I’ve added a groove near the ceiling containing the lights (also called cove lighting) and built out the fire place so I can sneak the ribbon up. From there, I placed an LED behind the fireplace and continued to run the ribbon up for more cove lighting on the 2nd floor. Since the roof opens up on the 3rd floor for playability, I created a vertical light bar for that level. 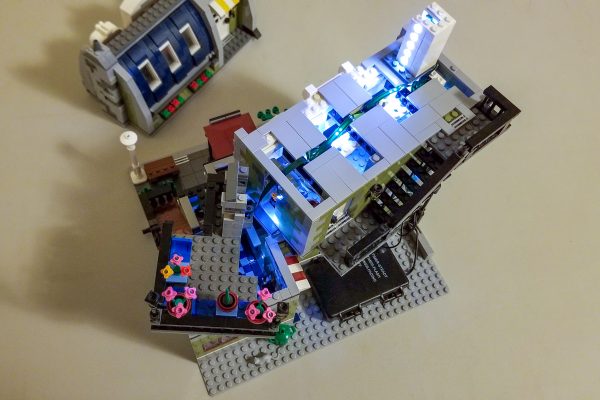 Another big consideration for me is playability. Running a single strand of lights all the way through the model makes it harder to open the model back up again. I didn’t like this as I want to open it up. I went through the model redesigning the floors, ceiling and walls to sneak that cable through while still allowing it come apart. The third floor in this example completely comes off so you can see the 2nd floor, but the second floor ceiling is now tied up with lighting and while I can get the 1st and second apart, it’s not completely separated because there is limited distance for the ribbon to shift around. 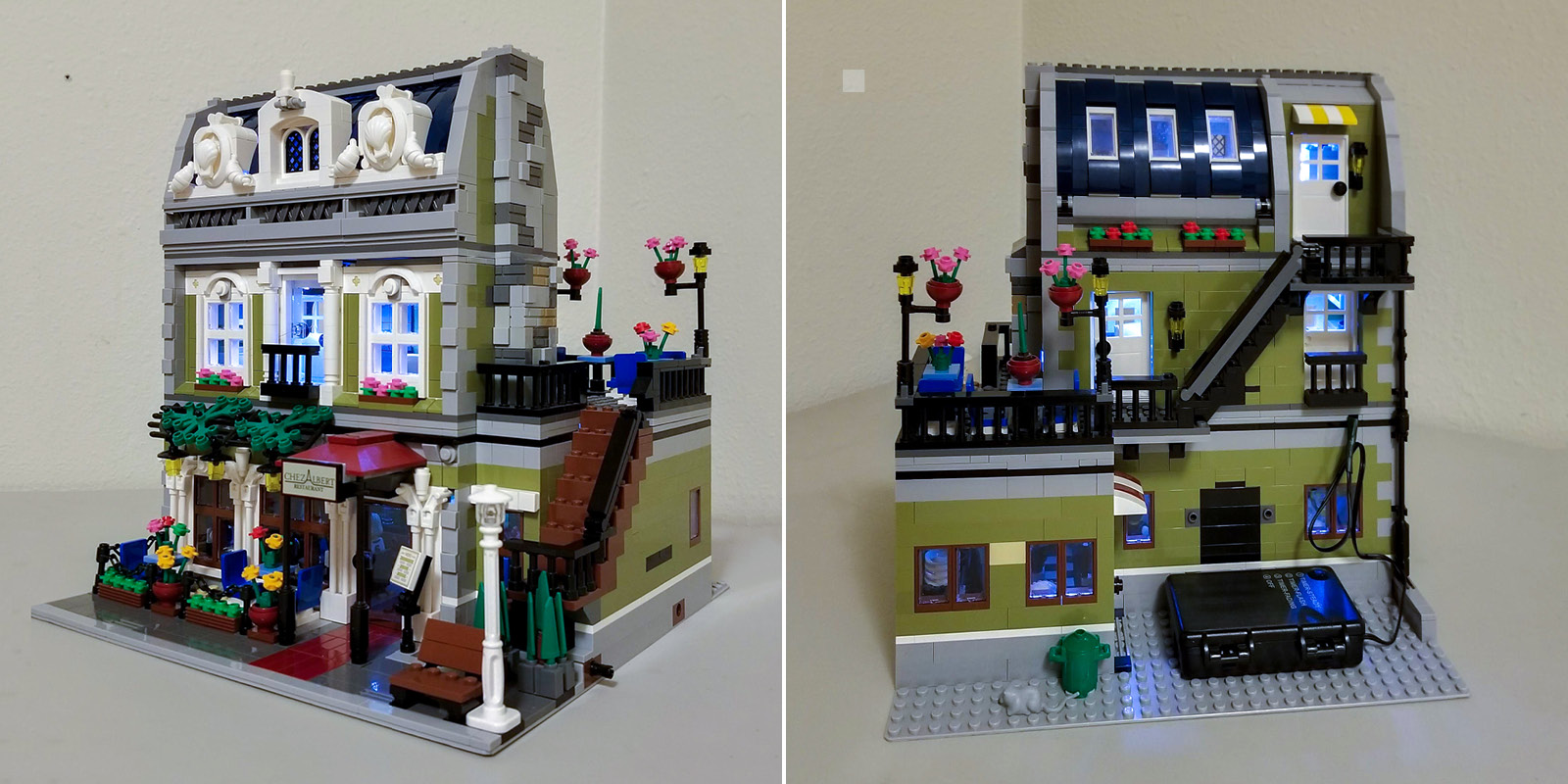 Overall, I was pretty happy with the lighting, but you’ll notice the street lamp and the hanging lights along the front of the building are not lit. Running lighting to them is impractical with this method of lighting your model, which is where a pre-made kit might be worth the extra money. Some kits come with lights for those and features like a flickering fireplace light. While this is definitely an economical option, the biggest downsides were the ugly battery box, and some restrictions on opening the modular up afterwards.

Most of these lighting products fit into a Technic hole, with about one studs worth of space needed for the wiring and the back of the LED bulb. With some skill, you can fit the light into the hole, run the cables back and forth and put a cover on the top to keep it all in place. This actually works fairly well, but the lighting cove is 5 plates high, which really starts to eat into the interior space.

You can really see how much space is taken up in the photo of the recording studio (on the 3rd floor of the Downtown Diner.) Similarly, on the first floor of the diner the cove interfered with the framed records on the walls. This resulted in moving the pictures down so the lighting run wasn’t running over the top of them.

To fully light the Diner, I ended up using 2 strands which meant 2 battery packs. I decided since this was a 50’s style diner to build out a smokehouse in the back and run a chimney up to the roof. This gave me space to hide the batteries, as well as a way to shuttle the wires up from floor to floor and access to the back of the juke box to add four LEDs to that. A small side door and a regular door gives access to both on/off switches. 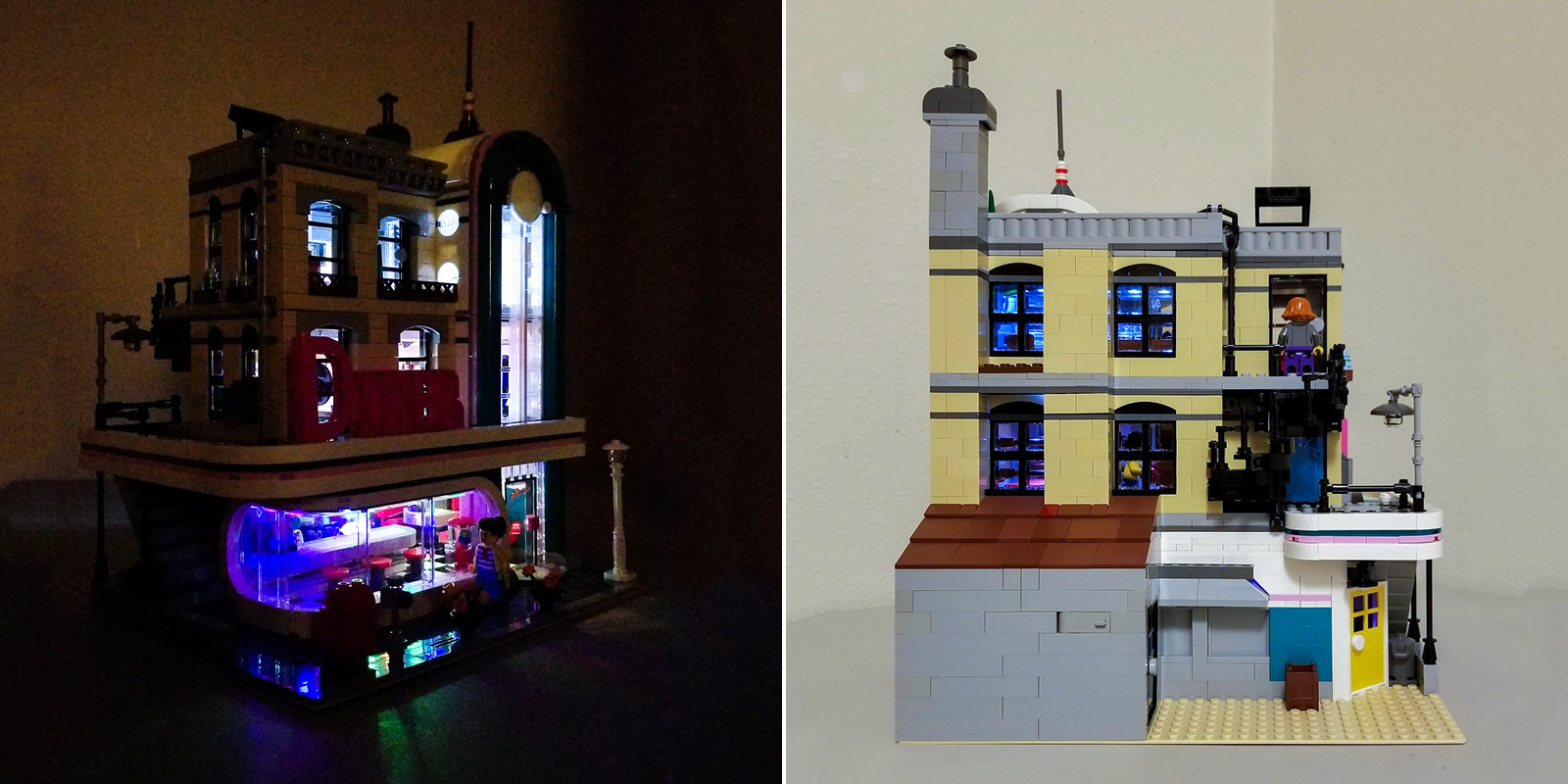 Downtown Diner with Lights (left), and back of Diner showing smokehouse built to cover the battery packs (right.)

The first string is a multi-colored strand which I ran to the diner to give it that sort of fun vibe. In a darker room, the colors give a nice ambiance to the diner. The other floors have a standard white light string. Unfortunately, some of the neat things I wanted lit up like the big 2-story window are very hard to work into the design without completely redesigning the building. While I didn’t mind adding in an extension on the back to hide the batteries on the Diner or expanding the fireplace on the Cafe, I wasn’t really wanting to totally redesign that beautiful large picture window. Here again is where the kits are far superior to the off the shelf Christmas lights.

As you can see, the lights are so dim that I could barely take a photo in a fairly dark room. Even with fresh batteries, these lights mostly disappear in a well-lit space. 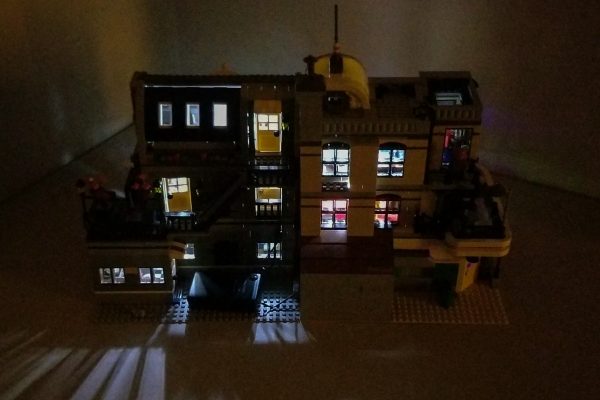 In the end, I was happy with the lighting, but I bought all three strings of lights on clearance for less than 6 dollars. Unfortunately, when compared to lighting solutions designed for LEGO, they pale in comparison! Battery powered LED Christmas lights earn our “Acceptable” (2/5 star) rating—only the very low cost saved them from our lowest rating!

In future reviews, we will look at products designed specifically for adding lighting to your LEGO models.
Photos by Jeannie Jonas. Visit the About page for more info about our journalistic standards and affiliate programs.