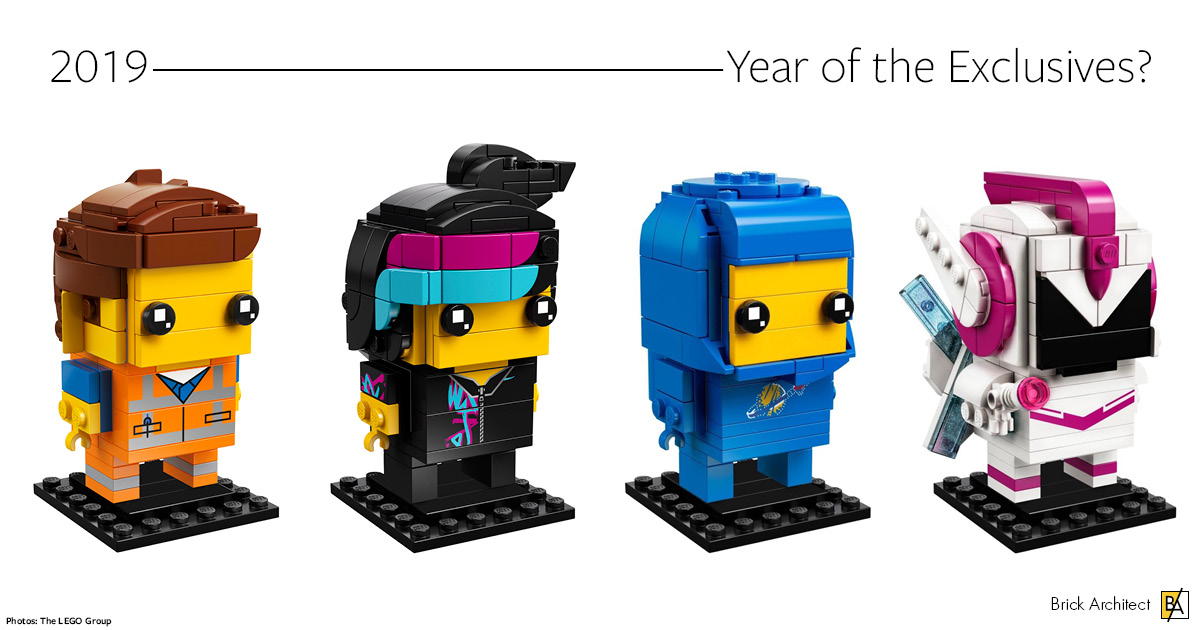 LEGO has offered a couple exclusive sets at ComicCon for years, but there seems to be an explosion of regional exclusives right now. Let’s use the Brickheadz based on LEGO Movie 2 as a case study to try and figure out what’s going on.

Excluding one set from 2004, there have been one or more Limited Edition LEGO sets released at San Diego Comic Con every year. Most recently, in 2018 there were 3 custom sets, and 3 exclusive minifigures. Naturally, these exclusive sets fetch a huge premium for resellers on ebay. Fortunately for LEGO fans, there haven’t been very many other limited edition exclusive sets beyond the Comic Con sets, the extremely rare Inside Tour sets, and the annual employee gift set.

I’m dissapointed that #80101 Chinese New Year’s Eve Dinner is not available in the USA, because the set features beautiful architectural detailing.

This seems to be changing in 2019. First, we learned about two gorgeous sets which would only be sold in Asia: #80101 Chinese New Year’s Eve Dinner, and #80102 Dragon Dance. As far as we know these are not a limited edition, but enterprising resellers in Asia are selling them on ebay for about double their retail price. More recently, we learned about four Brickheadz based on The LEGO Movie 2: The Second Part, which are not only exclusive to the United States, but limited to 5000 sets each, with two sets only available at Walmart, and two sets only availabe at Target. (All four are already sold out.)

Brickheadz based on The LEGO Movie 2: The Other Part.

Let’s be clear, The LEGO Group makes the most money when you buy full-priced LEGO sets directly from the LEGO.com online store. Amazon recognized many years ago that maintaining a warehouse is a lot cheaper than an expensive retail brick-and-mortar store, allowing them to sell the same products for less while still making a lot of money. LEGO has an even better deal than Amazon since they are both the manufacturer and the seller. It’s hard to understand why The LEGO Group would create limited edition sets for Walmart or Target.

In this article, we will use the four LEGO Movie 2 Brickheadz as a case study to try and understand if the primary motivation is to make money selling these sets, or if The LEGO Group has an ulterior motive.

Could Limited Edition Exclusives be Profitable?

NOTE: In order to estimate the profitability of these exclusive sets, I made many assumptions which could very easily be wrong. If you think my estimates are incorrect, leave a comment explaining why.

Let’s start with what we know: each of the four sets appears to be limited to 5000 copies for a total of 20,000 sets. Walmart is selling theirs for $15, whereas Target is selling theirs for $10 (but requiring users to sign-up for a Target Credit Card). That’s a retail total of $250,000 which might sound like a lot of money, but that’s a drop in the bucket for companies as large as Walmart, Target, and LEGO.

Retailers purchase goods from the manufacturer for a signifcat discount compared to the MSRP. Online stores like Amazon can sell at a lower cost while making money than a specialty brick-and-mortar store because online stores do not need to pay for premium retail locations and lots of employees. While wholesale discounts for products such as toys can vary widely, stores probably pay between 40% and 60% below retail. Let’s assume 50% since there is no way for us to know and it keeps the math simple.

Since there’s nothing inherently more expensive about the two sets being sold at Walmart for $15 as compared to the two sets being sold at Target for $10, let’s assume that The LEGO group assumed the same 10$ MSRP as the rest of the sets in the Brickheadz line. a 50% discount on a $10 set would be 5$ per set. By these estimates, both Walmart & Target paid $50,000 to The LEGO Group, for a total of $100k.

For The LEGO Group to make any money, they would need to ensure that the total cost for the Research, Design, Manufacturing, and Shipping of 20,000 LEGO sets is less than $100,000. Is that even possible?

First, there are research & design development costs. It is hard to believe that all four of these sets could go through the entire research and design process using less than a total of three months of design talent spread across the many employees required to make a set including: initial design, design iterations, product safety testing, photography, instruction manual design, and packaging design.

Again, we are guessing, but it is likely that the total cost to The LEGO Group for each employee is around $250,000 a year. The total cost would need to factor in obvious expenses such as base salary and benefits, but we need to also consider support personnel such as cafeteria staff, building reception, security, human resources, janitorial services, and managerial overhead. There are also amortized costs of the buildings they work in, computer hardware, travel expenses, and supplies (including lots of LEGO bricks). Many of their employees come from outside of Denmark, which means additional costs in recruiting and visas.

Lastly, there are distribution costs, but this part is easy. With the advent of container ships, transportation by sea has become so inexpensive that it is a negligible cost for the goods we buy. As such, we can estimate distribution costs to be 0$.

With an estimate of $100k in income and $90k in costs, The LEGO Group might only make $10k. That’s a horrible return on investment for a company as large and profitable as they are.

If it isn’t profitable, why do it?

There are many reasons why The LEGO Group might have decided to create these limited-edition retailer exclusive sets.

Of course, we will never know why they decided to release these four sets as limited edition retailer exclusives. Time will tell if this is a short-term marketing experiment, or a harbinger of even more limited edition exclusives coming soon.

Why do you think they decided to release these sets as limited-edition retailer exclusives? I’d love to hear your thoughts—leave a comment below!