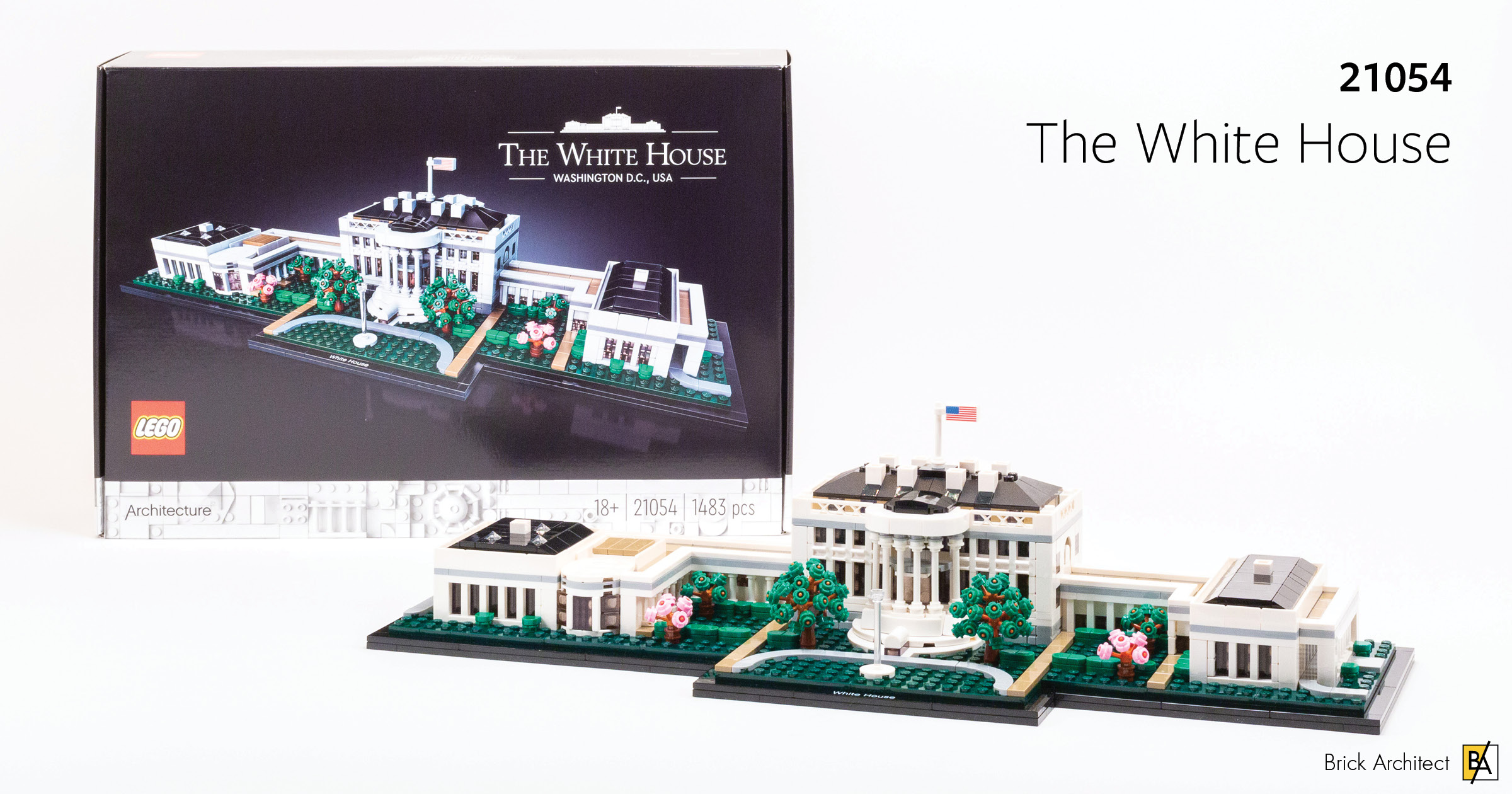 Ten years later, The LEGO Group is revisiting one of the first great models in the LEGO Architecture series. Let’s see if this interpretation improves on the popular 2010 version. 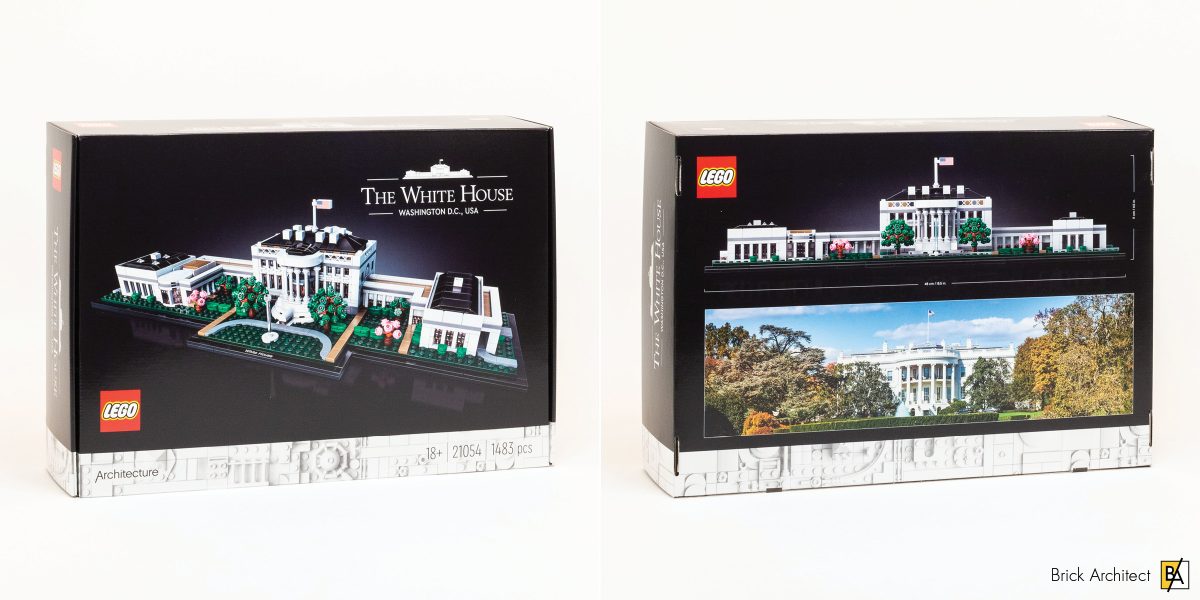 I’m disappointed and confused as to why they are releasing the set two months later in the country where the building is located than elsewhere in the world. I’m not alone—this has already led to confusion and anger amongst many LEGO Architecture enthusiasts who aren’t able to get the set while friends in Europe and Asia can buy it. 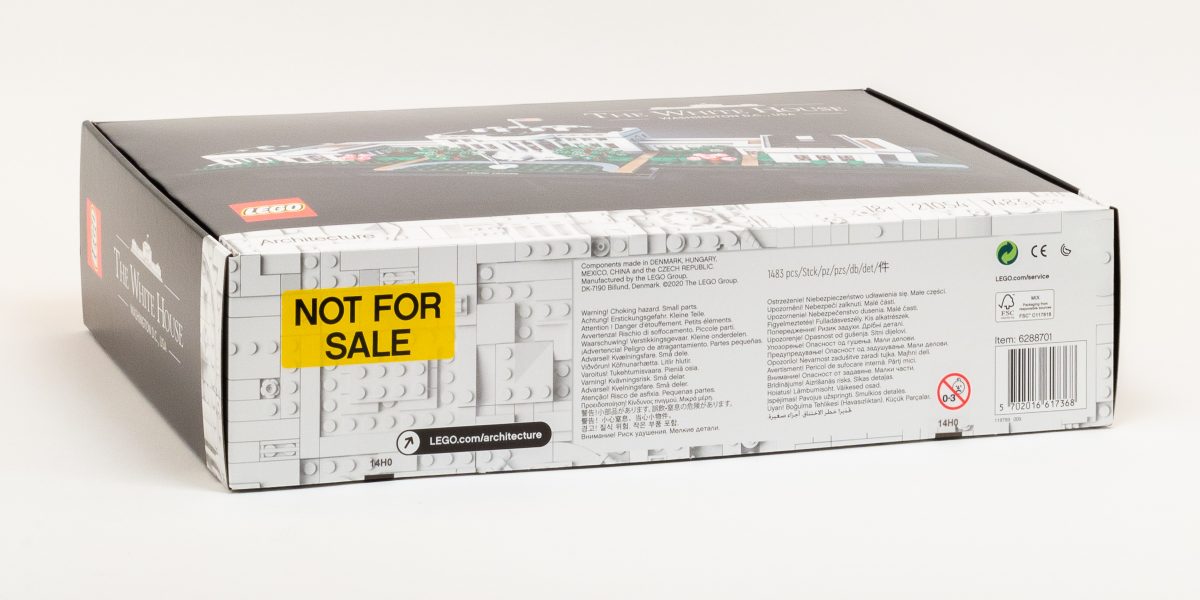 The bottom of the box is white, matching the slender white band across the front.

This is the first LEGO Architecture set with the new Adult-oriented packaging design and 18+ recommended age. In a recent article, we discussed the New design for adult-focused LEGO products. While this is a significant departure from the all-black box of previous sets in the series, I am pleased to report that it is still a premium box with the same recloseable flap design as previous sets in the series.

When this set was first announced, we published an in-depth preview of the new set, which compared it to the earlier #21006 The White House set which was released in 2010. In my opinion, it was the first set in the series that really got the LEGO Architecture formula right, capturing more intricate architectural details in a reasonably-sized model. (The 2009 model of #21005 Fallingwater is also an excellent set, but doesn’t have the same brick-built base and black border as the rest of the sets in the series.) 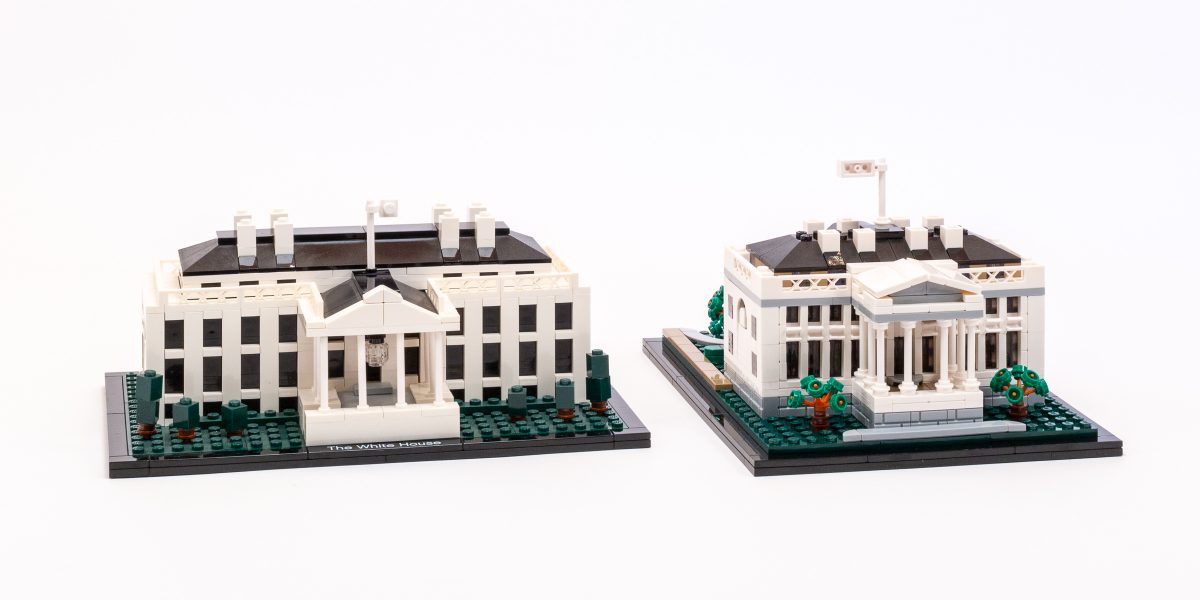 It’s easy to see that the newer version is more intricately detailed due to more advanced building techniques, but the proportions of the newer model are way off! Since the height of both versions result in a 1:298 scale, the 2010 version’s 1:267 scale (based on width) has significantly more realistic proportions when viewed from the front than the 2020 version’s 1:400 scale (based on width). If you want to see all the calculations, go back to my earlier article ᴘʀᴇᴠɪᴇᴡ: #21054 The White House.

Suffice to say, I was already a bit disappointed by the new model due to the poor proportions of the front facade before getting started, but was excited to see if the addition of the East and West Wing make up for this problem. Let’s find out…

I noticed that my instruction booklet was damaged, even though the box was in perfect condition. I suspect that this is caused by the large plates which are not packed in a separate bag. (It didn’t help that the DHL driver threw the box onto my porch.)

Because the model features three distinct sections, we will break the review into stages: Executive Residence, East Wing, and West Wing.

Immediately before getting started, the instruction booklet introduces the iconic central portion of this model as “A Grand Mansion”, noting that it is built in a Neoclassical Federal architectural style, which is heavily influenced by classical Greek architecture. In a modern context, this central portion of the White House complex is referred to as the Executive Residence, because it is the home of the President and his (or one day, her) family.

The first bag begins more-or-less as I expected, by assembling the familiar base for sets in the LEGO Architecture series comprised of one layer of black plate, with a one-stud border of black tile (including the iconic printed nameplate), with a third layer on top of that.

Usually, the third layer is mostly covered in tile, except where the building will appear. For this model, the entire third layer is covered with 141Earth GreenDark Green plate, which results in lots of visible studs in the finished model. Because we spent less time on the base than many other sets in the series, we jumped right into assembling the building’s foundation, which uses 1×2 masonry bricks to good effect. 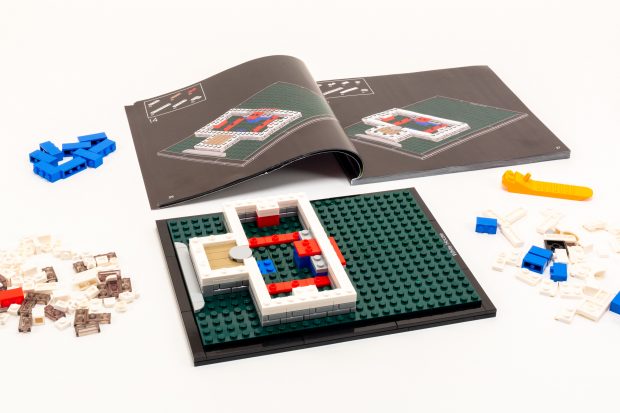 The base and foundation.

After building the base and foundation, we build the walls on either end, which include windows that you need to carefully re-create using three 1×1 trans-black plates. (I am not sure if they chose to use three plates instead of one brick to more faithfully re-create traditional windows made with smaller pieces of glass, or to increase the part count without increasing the manufacturing cost very much.) The ends are topped with a cleverly designed SNOT assembly that re-creates the arched window on each end. 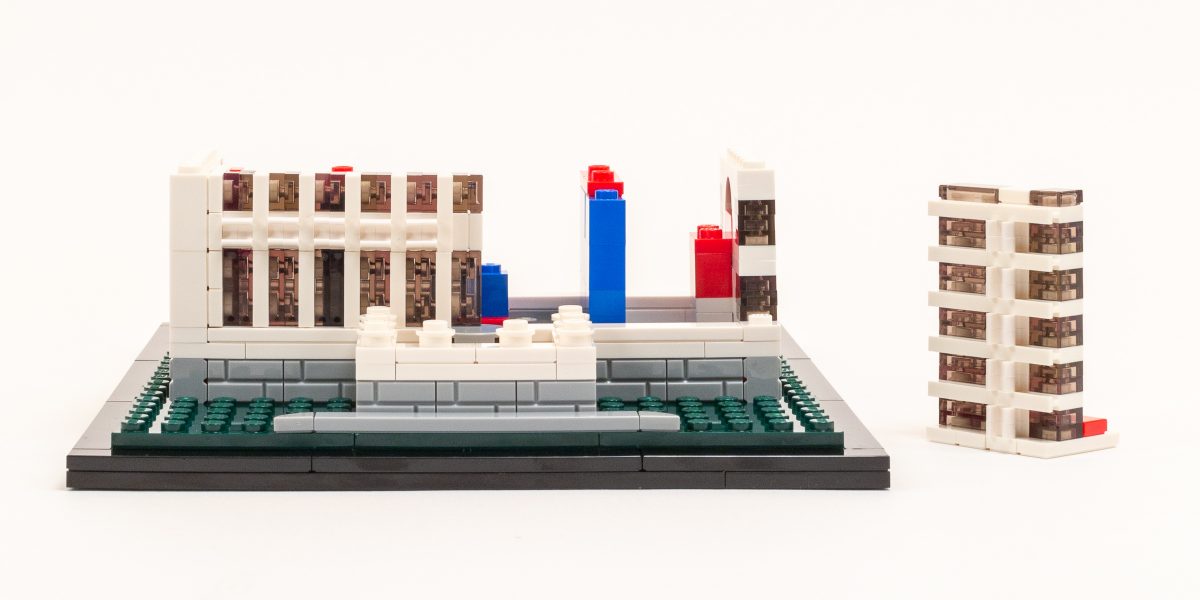 The north side of the building uses two large SNOT assemblies.

Now we move on to the north side of the building, which is built using two huge SNOT assemblies, that cleverly utilize 1×1 w/ clip, horizontal to re-create fine horizontal detailing in between the first and second story windows.

We begin the second bag by assembling a similar large SNOT assembly for the first and second floor windows on the south side of the building. The only difference on this side is that a pair of SNOT brackets are included in these assemblies, which are centered in the front of the building.

After that, we move on to the columns and triangular pediment that comprise the North Portico. I’m not entirely satisfied by the technique used to attach the columns to the model—it relies on the same technique used in #21022 Lincoln Memorial which uses the hollow studs of 1×1 w/ Hole (part 85861) to attach Bar 4L (part 30374) to studs below and above. 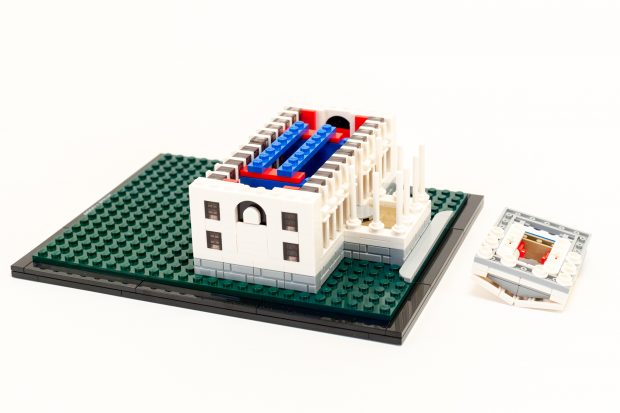 Attaching the rectangular portico is tricky, because it’s hard to get the columns to line up.

The problem is exacerbated by the fact that along the bottom, some of the 1×1 w/ Hole pieces are attached to normal studs and some are attached to 1×2 jumper plates. The bar slides further down when attached to the jumper (since a jumper has a hollow stud) than when it’s attached to a normal stud (with the word ‘LEGO’ on neach raised stud). Attaching the pediment on top of these wobbly columns is needlessly difficult. 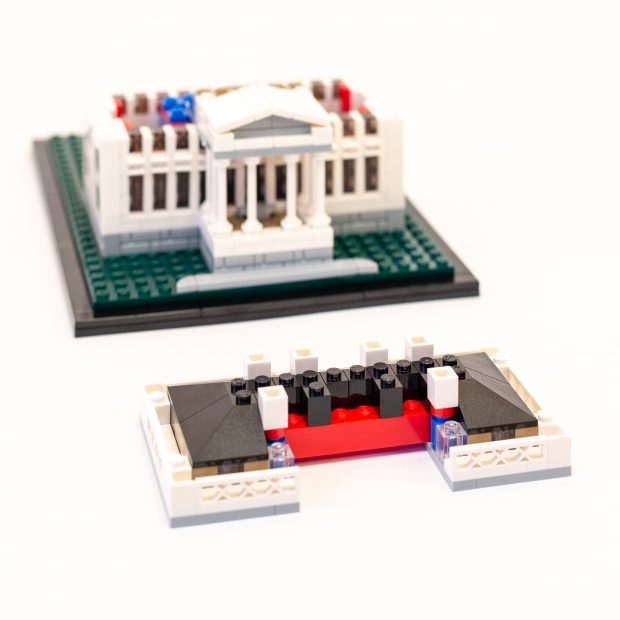 Getting ready to install the roof assembly.

Next, we built a pretty straightforward roof assembly, using similar slopes and fence elements to the earlier 2010 version of the White House. The one big upgrade which we highlighted in our earlier preview of this set is that the chimneys still use 1×1 bricks, but they are inverted which makes the chimney appear hollow when viewed from the top. 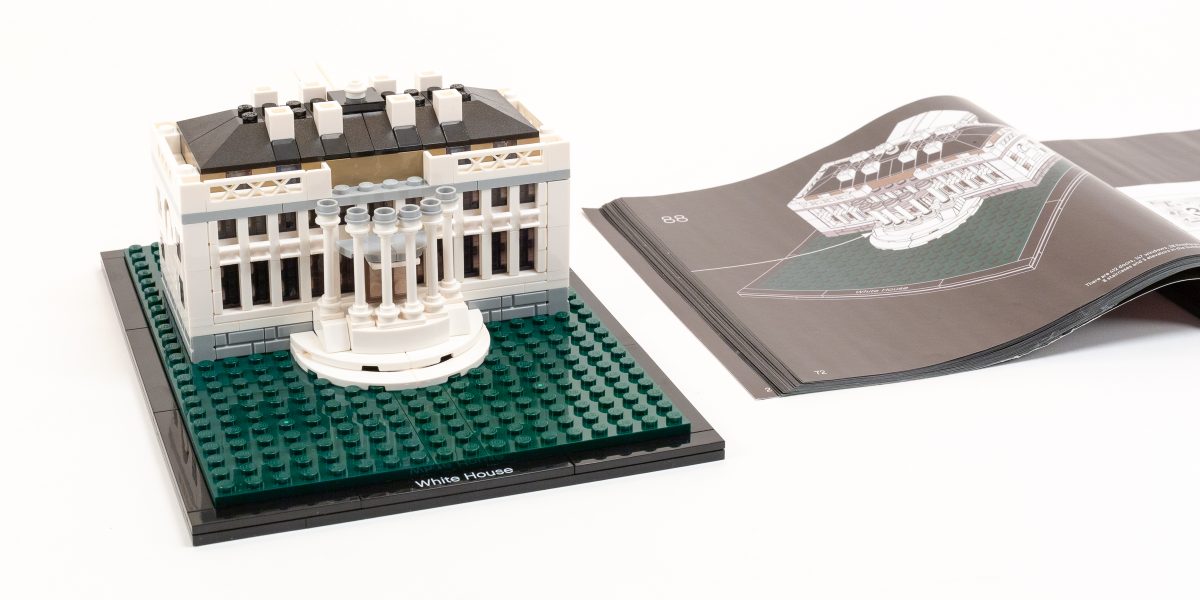 Progress at the end of Bag 2.

The final section of this bag assembles the base and columns for the round South Portico that faces the National Mall. The base uses some nice SNOT techniques, and the columns use the same Bar 4L elements used on the other side.

There are only two small bags for stage 3. That makes sense since all that appears to be remaining is the roof of the South Portico, and the landscaping. One thing that I really dislike is that the curved driveway is placed on top of the grass, instead of being flush with level of the grass. This is in contrast to almost every other set in the LEGO Architecture series, which has relatively few visible studs on horizontal surfaces. 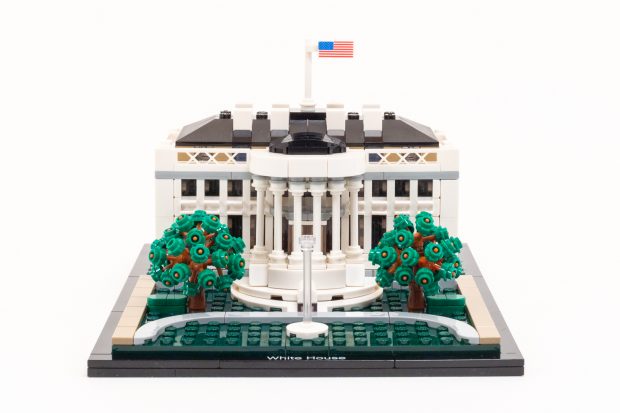 By contrast, the large trees are absolutely delightful, constructed using five 6-Stem w/ Bar (part 19119), which means that each tree has 30 1×1 Flower, 5-petals (part 24866) in 28Dark GreenGreen. This creates a very nice, very full deciduous tree on either side of the South Portico.

After completing the Executive Residence, we move on to the East Wing of The White House. The first East Wing was built in 1902, although it was razed and replaced by the current building (and an underground shelter) in 1942.

This is extremely confusing, since we learn about the West Wing on page 84, then start building the East Wing on page 86. (This may be fixed in newer copies of this set; the building instructions you can download at LEGO.com have fixed this issue.) 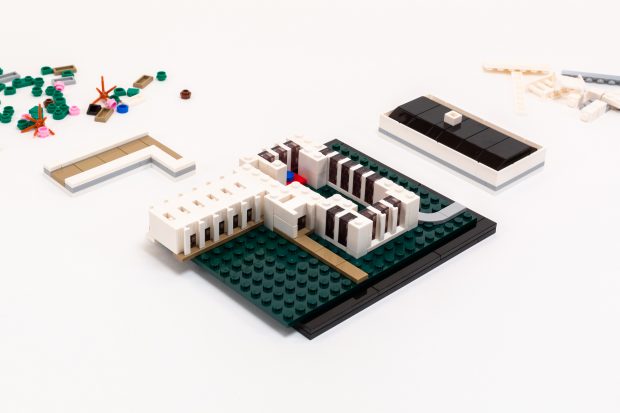 You can see lots of SNOT techniques are visible before putting the roof on.

As for the building process, I’m pleased to report that it is a pretty straightforward but satisfying build. The building’s more restrained architectural style is accurately reflected through the use of more SNOT assemblies, which allow the windows to be recessed ½ stud from the buildings exterior profile. At the end, we add some more landscaping features to soften the finished model. 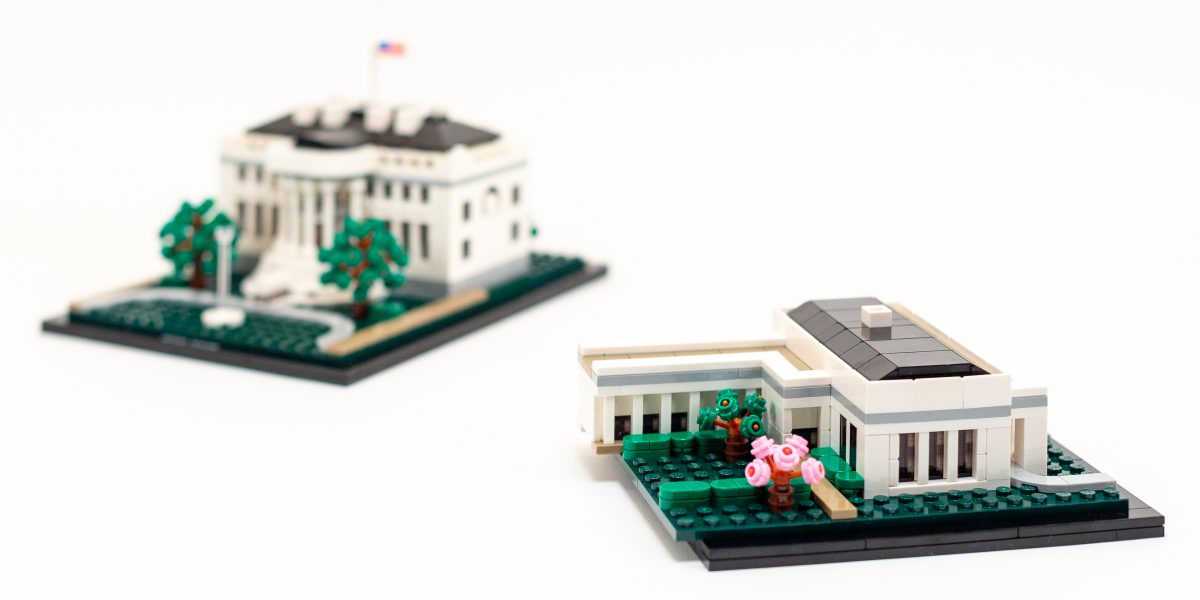 The East Wing can be attached and removed from the Executive Residence.

In the last stage of the build process, we get to build the West Wing. Again, this section of the model is built as a separate module, which is connected to the Executive Residence by the West Colonnade.

The building techniques are very similar to what we just saw in the East Wing, with 2-stud tall SNOT assemblies slotted into bays on all four sides of the building. The biggest difference is that they also needed to approximate the shape of the Oval Office, which they achieved using 30° 1×1 Slope (part 54200) in 111Transparent BrownTrans-Black.

There are also lots of SNOT techniques in the West Wing. 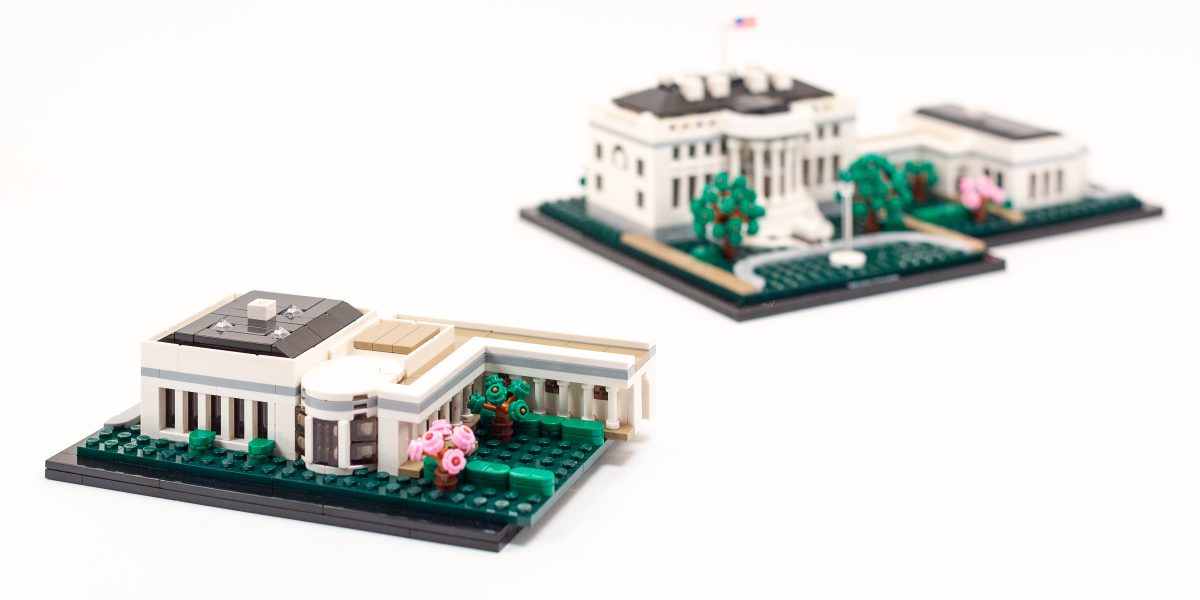 Again, the roof technique is similar to that of the other wing, utilizing 2×2 jumper plates to create a ½ stud offset between the black sloped portion of the roof, and the white cornice that it sits on. We wrap up the model by adding a few more landscaping details.

While certain LEGO Architecture sets (like this one) offer a lot of tiny pieces for a very good price-per-part, these sets almost never introduce completely new parts, and rarely introduce an existing part in a new color. This set does include one existing part in a popular color, and two new printed tiles.

Label for part 35480 is included in LEGO Brick Labels.

Let’s be honest, this release comes at a weird time in American History. As we speak, the Black Lives Matter protests have swept the nation, despite the backdrop of a global pandemic and the most polarizing presidency in history.

We also can’t ignore The LEGO Group’s misguided decision to release a model featuring an iconic US Landmark to a domestic audience two months later than it was released in Europe and Asia. This has caused a lot of confusion and anger from Americans who want to build the brand new set while stuck at home. 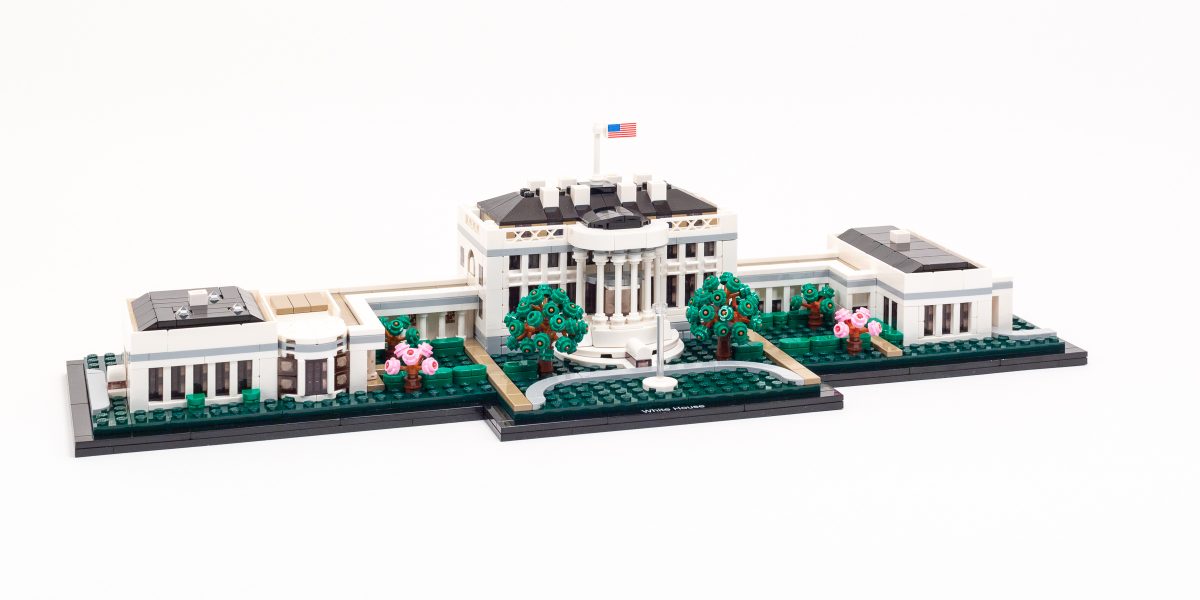 When we focus on the set and compare it to the prior #21006 The White House (2010) version, we discover that this set offers an excellent price-per-part, more advanced and intricate building techniques, and the opportunity to explore the whole White House complex. The removeable East and West wings even offer a very small amount of “playability”.

On the other hand, I really do not like the aesthetic choices for the landscaping. There are a lot of visible studs, and the fact that the driveways and pathways are one stud higher than the grass looks really weird. Most of all, incorrect proportions for the front façade of the Executive Residence are a huge problem of this version. 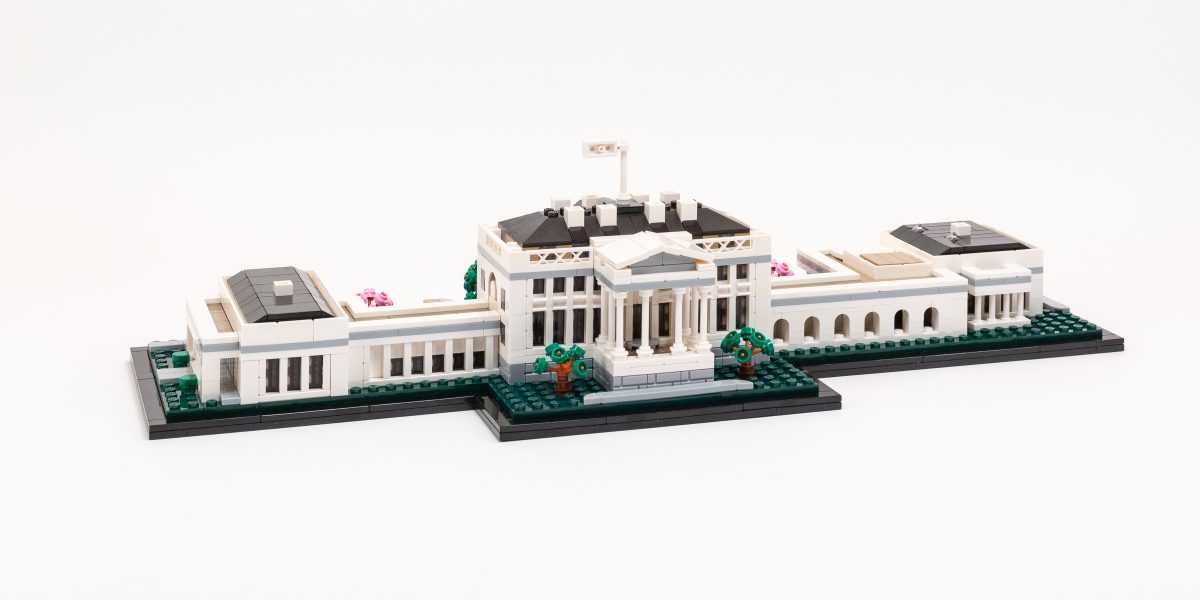 This set is a mixed bag, with many highlights and many lowlights. It is hard to excuse the poor proportions of the Executive Residence, especially when the earlier 2010 model was almost perfect in this regard. As a whole, the set earns our “Good” (3/5 star) rating. It’s saved from an even lower rating because the finished model is nicely detailed, has a pleasing overall composition, and offers a good value.

Ready to add this sprawling model of #21054 The White House to your collections, consider using our referral links. It’s an easy way to help support Brick Architect!
The LEGO Group provided this set for the purposes of this review. The opinions in this article are strictly my own—providing sets for review does not guarantee a positive review. Photos in this article are by Tom Alphin unless otherwise noted. Visit the About page for more info about our journalistic standards and affiliate programs.