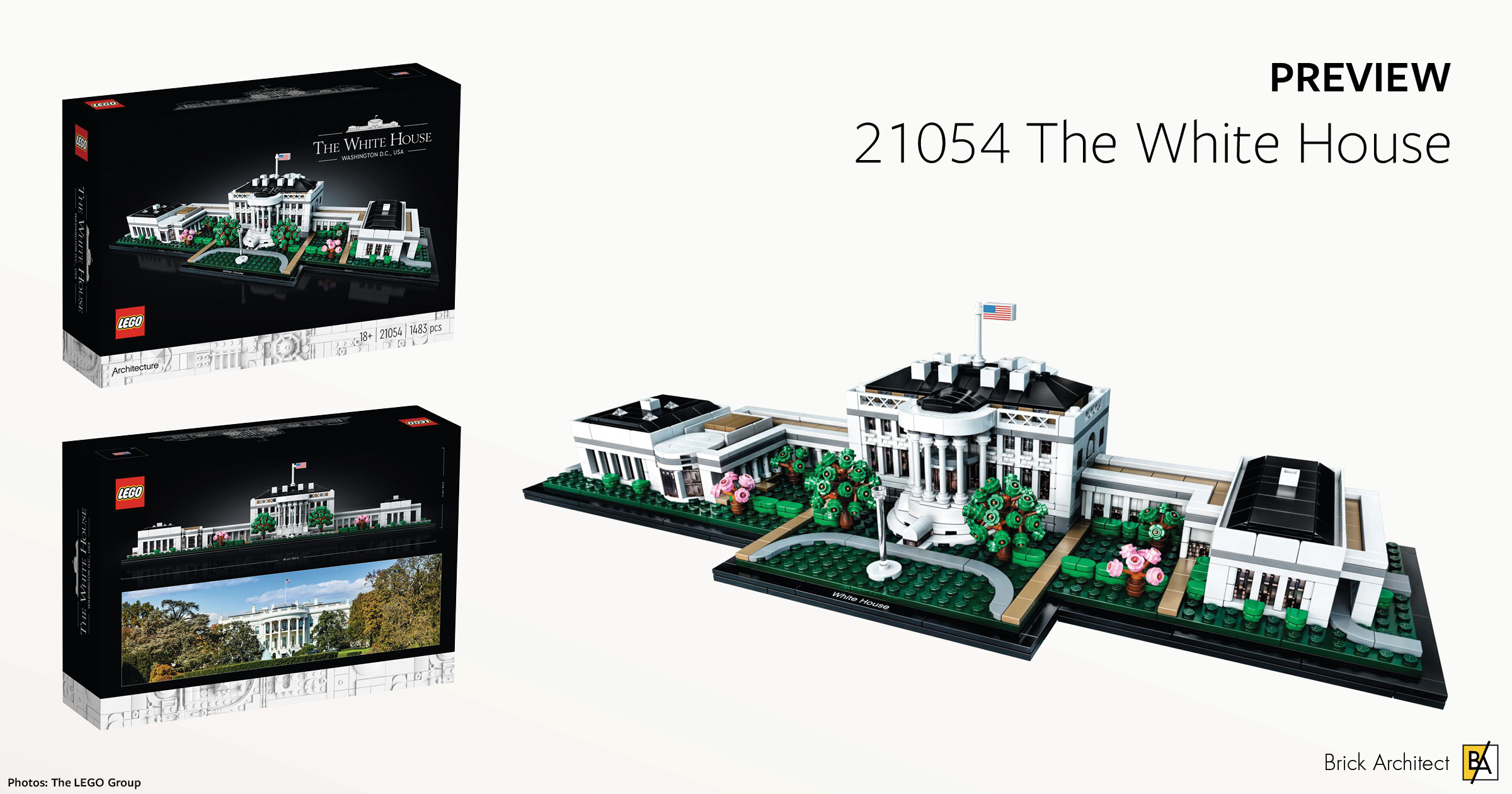 Since the LEGO Architecture Skyline series debuted in 2016, two or three Skylines were released in January, followed by two or three larger standalone models in the Summer. So far, only one large standalone model has been announced for 2020, and it isn’t even a new building for the series.

Instead, they are releasing an updated version of 2010’s #21006 The White House. I am pleased to say that it is a pretty significant refresh to the earlier design, utilizing more advanced building techniques and more intricate construction (made possible by some new parts which didn’t exist in 2010). 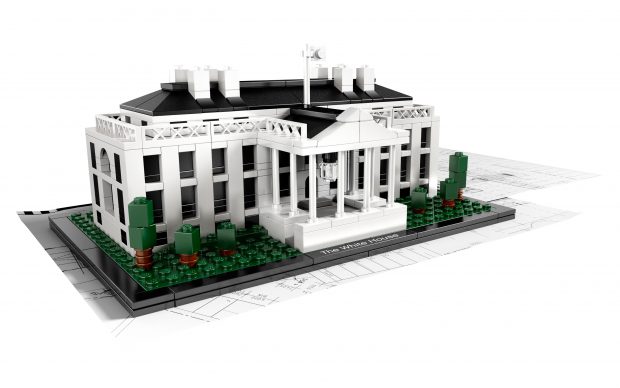 The previous #21006 The White House model was released 10 years earlier (July 2010). While we do not have a firm release date yet, it’s well known that is an election year in the United States. While The LEGO Group has made questionable choices in the past, they are the world’s largest toy company so we should assume that their decision to release a new version of The White House during the most polarizing presidency in history was intentional. As The White House is literally the home of the president, I’m surprised that they decided that this was the right time to tackle a political subject like this.

Nonetheless, let’s focus on the architectural merits of the building, and the technical aspects of this updated version. The new version contains 1483 pieces (versus 560 pieces in the previous version). The larger part count is easily attributable to the addition of both the East Wing (containing office space for the first lady and her staff, and the visitor’s entrance) and West Wing (containing offices for the president including the iconic oval office).

The building’s architectural pedigree is strong but mixed. This is due to the large number of remodels and extensions which have occured since the central building (designed by architect James Hoban) was completed in 1800. Now serving as the executive residence, the central building blends the simplicity of Neoclassical architecture with Palladian influences such as strict proportions and the rusticated lower levels. 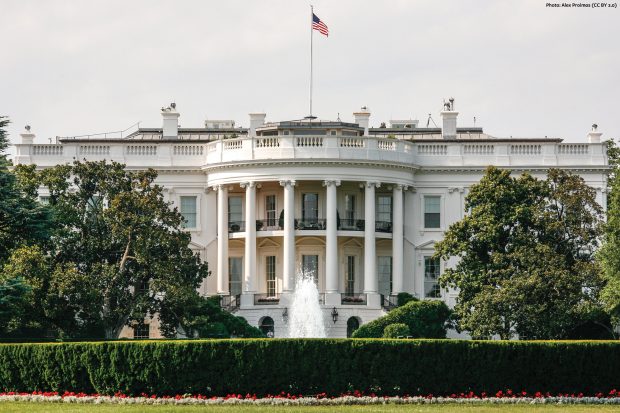 A few years later, talented amateur architect (and US President) Thomas Jefferson added the east and west colonnades to conceal domestic functions of the building. (Jefferson’s home at Poplar Forest also concealed cooking and laundry facilities in a partially hidden colonnade on the east side of his octagonal country home.)

The interior had to be rebuilt after it was burned in the War of 1812. Soon thereafter, Hoban returned to design the elliptical South Portico (1824), and rectangular North Portico (1830). While numerouos interior remodeling project followed, this finalized the central building’s exterior appearance. 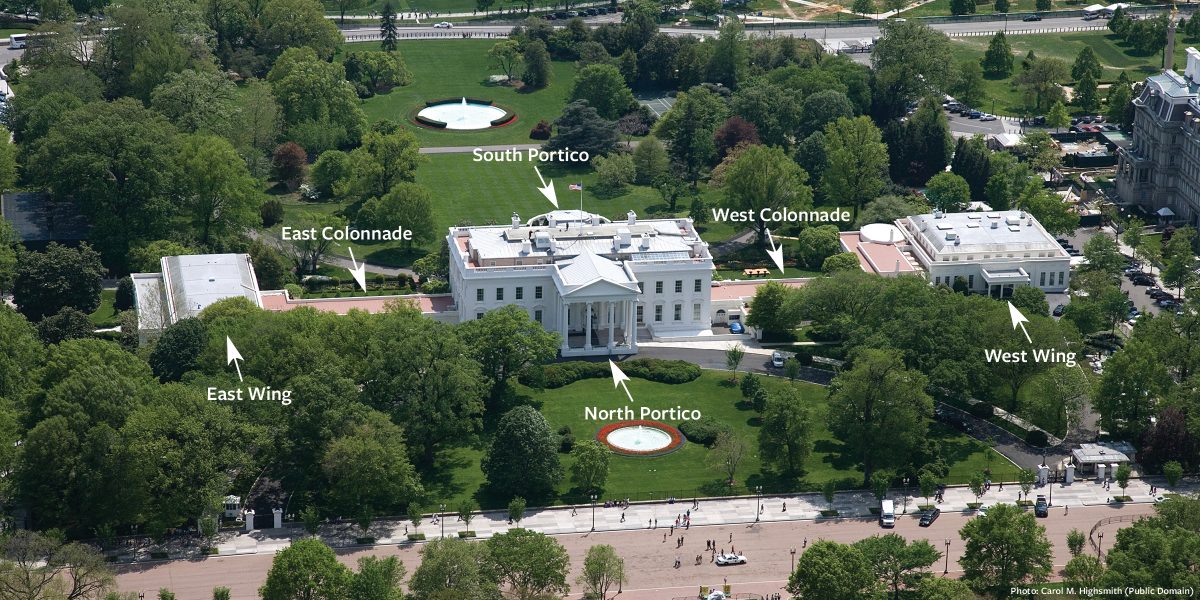 In 1902, Theodore Roosevelt brought on Charles McKim to design the West Wing, providing office space for the executive staff. The iconic Oval Office was added to the West Wing in a subsequent 1925 remodel by Nathan Wyeth.

A small East Wing was also added in 1902, the current East Wing was built in 1942 to house the offices of the First Lady and guest entrance (and to hide the construction of an underground emergency bunker).

While the White House complex is not the realization of a single architects master plan, it is a pleasing composition of three buildings connected through a similar visual style and a lateral collonade.

The obvious difference between this new version and the original model is the inclusion of the East and West Wings. In addition to additional architectural details, this results in a significant amount of additional landscaping, the curved driveway on the south facade, and the tall fountain visible when viewed from the National Mall. The resulting composition is reminiscent of another Washington DC landmark, #21030 United States Capitol Building.

On first glance at the new model, one thing stood out to me; the proportions of the central building do not look right. In both #21006 and the new #21054 versions, the central building is 8-studs deep (excluding the porticos), and about 19 plates tall (excluding the roof). Surprisingly, the older version 24-studs wide whereas the new one is just 16-studs wide (That’s 50% wider than the new one.) We’re going to need to do some math to determine which one is wrong.

What these calculations reveal is a fairly large discrepancy between the building height and depth in both versions of the model (1:408 based on depth, versus 1:298 based on height). Those proportions could be improved by either increasing the height of the model, or decreasing the depth of the model.

Since the new version has a 1:400 scale based on width and a 1:408 scale based on depth, the “easiest” fix would have been to reduce the height of the building by 4 or 5 plates, resulting in a scale of 1:380 or 1:406 respectively. Naturally, it is easier said than done to preserve adequate detail when reducing the size of a LEGO Model. (Alternately, they could make the entire model larger to accomodate a wider and deeper central building.)

As is typical of sets in the LEGO Architecture series, I do not see any new parts in the model. Ocassionally, we do see existing parts appearing in a new color, so we’ll have to wait and see when the set is released.

That said, I immediately noticed a new printed part: 1×2 Tile w/ USA Flag (part 3069). This is the first time the American flag is offered at this size, and will no doubt be popular with fans.

Two building techniques caught my eye that I want to highlight. The first is the extensive use of SNOT for the windows of all three buildings. Even the windows of the Oval Office are implemented using a SNOT assembly containing three plates and two Cheese wedges.

The second detail that made me smile were the chimneys, which appear to be White 1×1 Bricks which are upside-down. I’m not sure how they are attached internally, but I think we can all agree that this looks much better than the visible studs on original 2010 version.

You also might have noticed a significant facelift to the packaging. We’re used to LEGO Architecture sets which come in an austere black box with a front flap. (We can’t tell from the rendered box art if we still get a box flap, or if they’ve abandonded it in favor of a cheaper box with end flaps.) 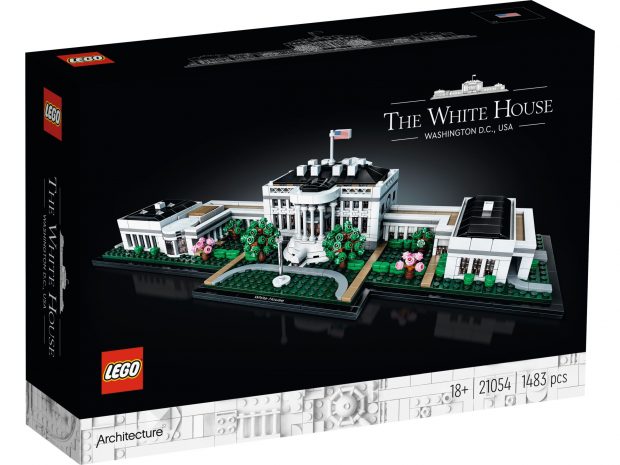 A new stylish packaging designed to reflect the sophisticated nature of the creative process.

Instead, we see a slender band of white bricks along the bottom of the box, containing facts about the set: recommended age | set number | part count. (This minimalist style debuted earlier in the year with three buildable Star Wars helmets.) 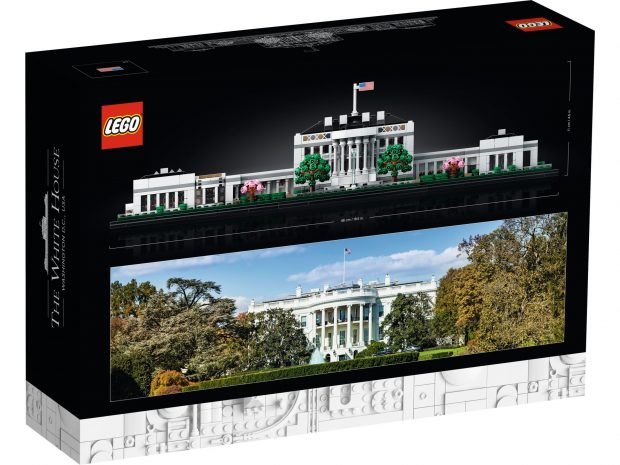 I hope you’ve enjoyed this sneak peek into an exciting upcoming LEGO Architecture set. We will be sure to share a detailed review of the set as soon as we can!