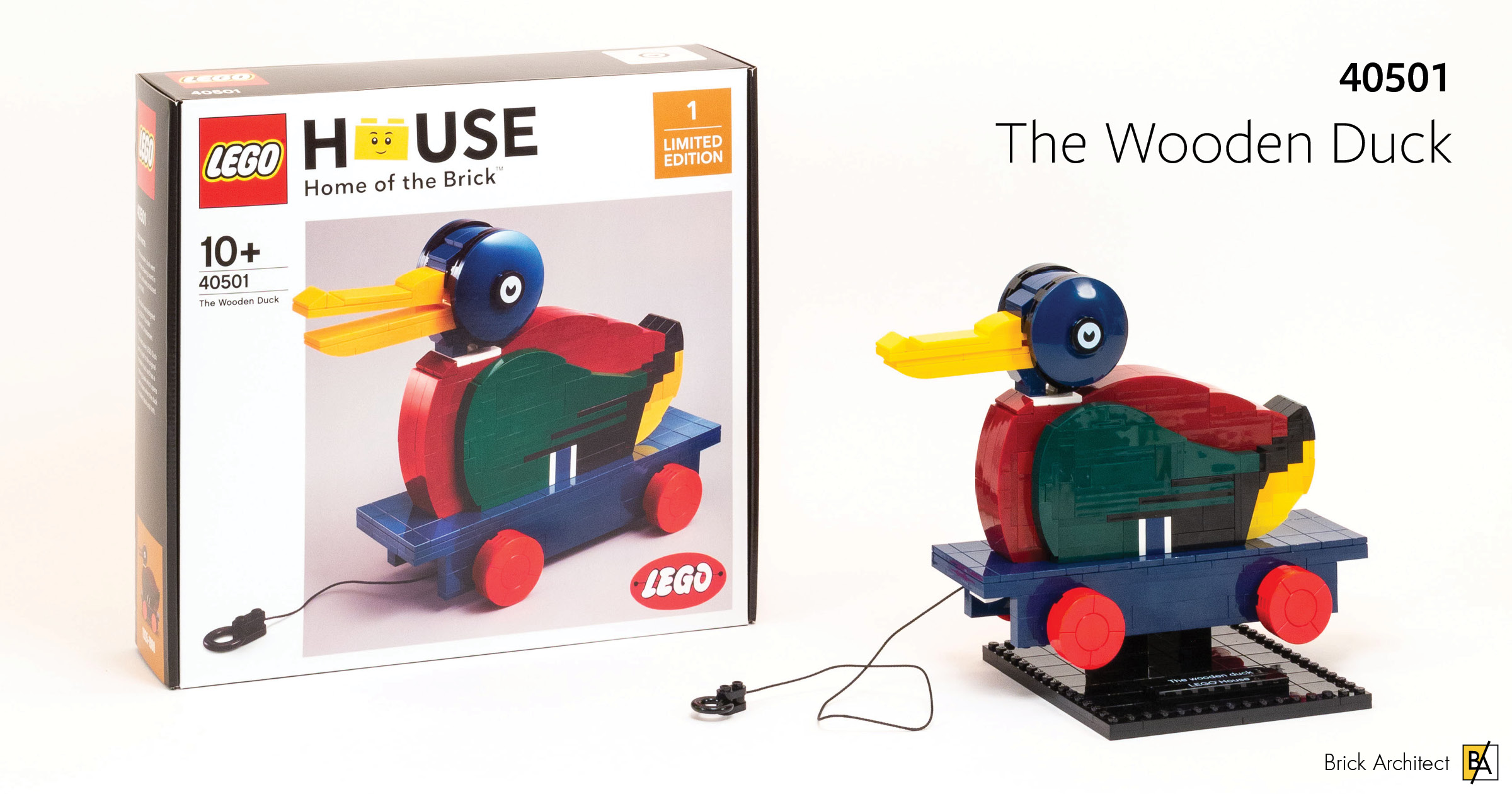 The Wooden Duck harkens back to the company’s early history as a wooden toy maker. In this article, we’ll review the new set, and a brief interview with the LEGO set designers and a LEGO historian. 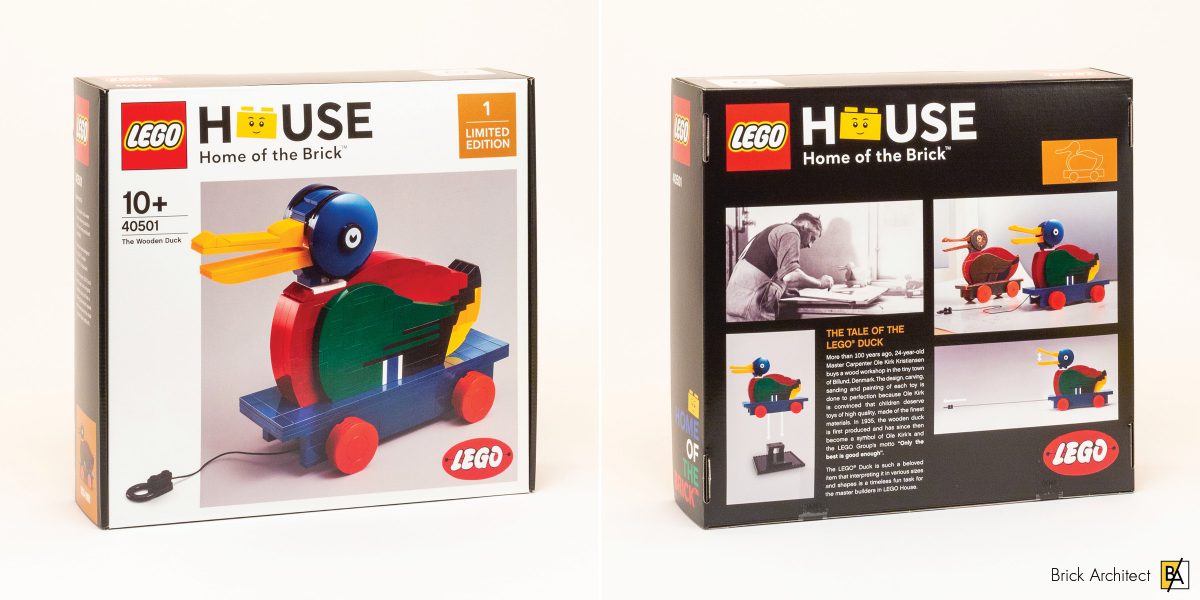 I have to admit that I was expecting a slightly smaller box when this arrived from Billund. The duck looked fairly small during the online press conference which unveiled the new set, so I’m guessing that this is going to be a really dense build, without a lot of hollow sections inside.

The box contains the usual goodies: an instruction manual, just one bag for each stage of the build (numbered for stages 1-6), and one unnumbered bag containing larger pieces. 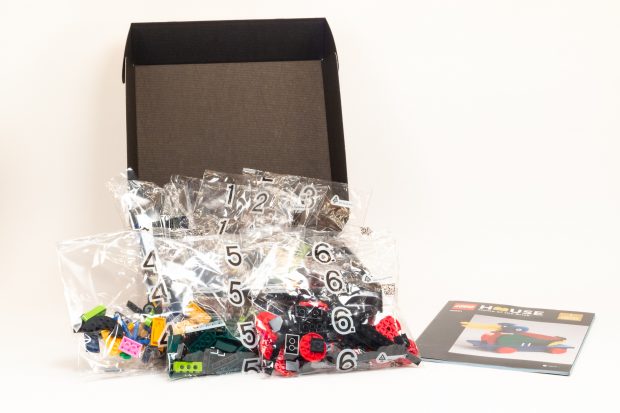 The box contains one instruction booklet and seven bags of parts.

Inside the box you will find:

This is an unusually large number of stages for a set with around 600 pieces. I can only guess that this was done to help keep the recommended age from being higher (since it’s harder to make mistakes when you have fewer parts per stage).

The first bag contains a whole lot of parts in almost only one color, 140Earth BlueDark Blue. The attractive color is hard to distinguish from Black in a poorly lit room, and can be hard to photograph, too.

More relevant for this build, The LEGO Group still hasn’t figured out how to make this color visible in building instructions. The dark blue color looks almost black in my moderately lit room, and the black lines on the edge of each piece in the instructions are nearly impossible to see. 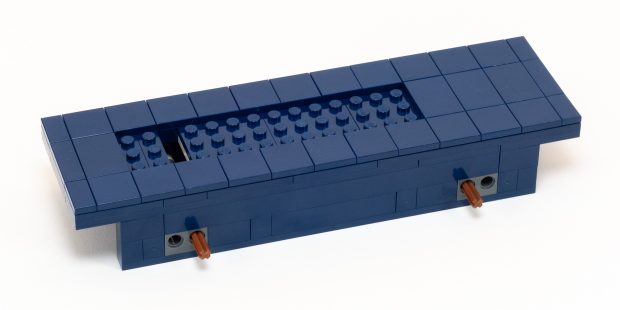 The actual build process is straightforward, even though some trickery is required to achieve the 7-stud wide rectangular base, since System components are not offered in this width. This is also when we build a simple technic mechanism which will be used to cause the duck’s beak to open. (They used the same mechanism for both the front and back wheel, which is not necessary since the rear wheel doesn’t have any mechanical functions.)

Here in bag 2, we start building the duck itself. This is a simple build process, with a large portion of the 3-stud wide assembly being built using relatively rare colors like 151Sand Green and 323AquaLight Aqua. 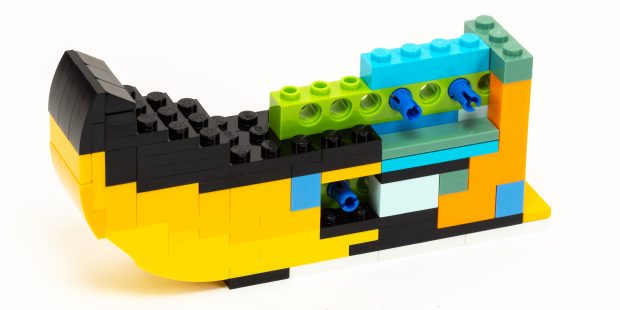 A duck butt is completed in Stage 2.

The only technicaly interesting part is the gentle curve achieved on one end, which uses a mix of curves, slopes, and SNOT techniques. This bag had fewer parts than the first one, so it’s no surprise that this went by really quickly.

This next bag is almost exclusively 154Dark Red, which is a nice thing because it is a nice color for building MOC’s. Unfortunately, it is also famous for being the most problematic color for color matching between different pieces, which is especially bad in this set. The 1×1 bricks (part 3005) and 2×2 corner bricks (part 2357) were noticeably darker than the rest of the pieces. 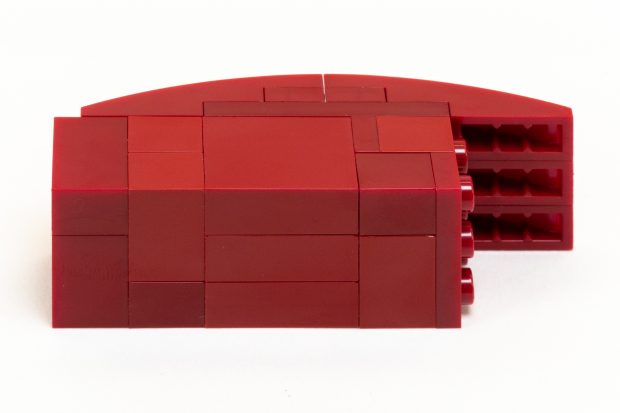 As we continue, we realize that we are building the duck breast, which is attached to the duck butt which we built in the previous bag.

Progress at the end of Stage 3.

This bag offers the highlight of the building process for me, as we attach the duck’s head and bills to the body using some elegant combinations of SNOT assemblies and Technic elements. That would be hard enough to get right in normal circumstances, but round shapes are difficult to achieve with LEGO bricks, adding an extra level of difficulty for the designers. 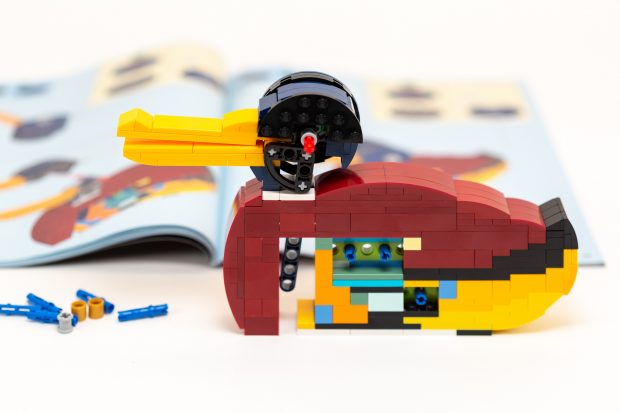 The duck head is attached using Technic and SNOT techniques.

While I did make a few minor mistakes as I was trying to assemble it too quickly, the head goes from being quite floppy to very secure in just a few pages. While there are some visible ½ plate gaps due to the specific SNOT elements used, it is a quite satisfying effect overall.

Wings… Bag 5 is all about the wings. Rather than embedding the wings within the torso we assembled in the previous stages, they are assembled as separate sub-assemblies that attach using three Technic pins.

Each of the wings attach using three Technic pins.

It certainly adds to the piece count and does not introduce any additional play features, but it does allow us to see how it works easily, since the wings can be removed easily too. I should also add that the visual texture on the wings looks nice, with white, dark green, and black pieces forming a checkered pattern. (The color matching on the dark green parts is also not quite right, just like the dark red in the previous bag.)

The last bag is all about the base… In this case, adding the four wheels to the duck, and an unexpected addition of a brick-built base for the model to stand on. The stand feels completely optional to me, since I was imagining the set as a toy, but it was clearly designed as a display piece as well. I guess that makes sense, since this is a likely souvenir for LEGO collectors to take home from “The Home of the Brick”.

Parts in this set

This set does not include any new parts, but it does include two new printed pieces, and a few pieces available in a new color for the first time. It’s always exciting to see parts available in more colors!

This is a cool model that harkens back to The LEGO Group’s heritage as a wooden toy manufacturer. The very same wooden ducks that you will find in the history collection in the basement of The LEGO House, in Billund, Denmark.

Unfortunately, the set is overpriced and there is very poor color matching (for 154Dark Red and 141Earth GreenDark Green colors). These deficiencies are enough to rule out our top “must have” rating. 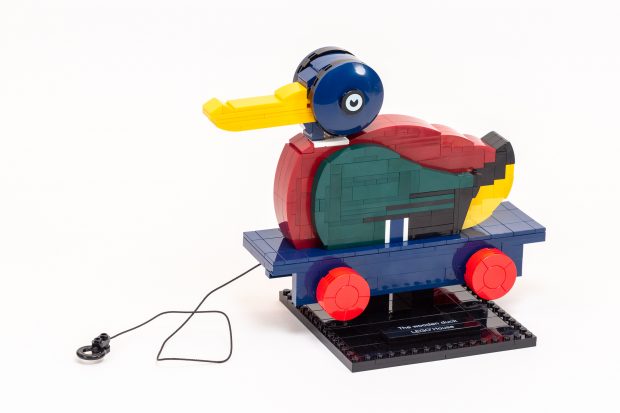 #40501 The Wooden Duck, available exclusively at The LEGO House.

Thankfully, the model includes a simple but satisfying mechanical function that causes the beak to ‘quack’ when pulling it across the carpet. I also loved the beautifully shaped duck body, head, and wings. I can’t wait to torment my nearly 2-year old son with a quacking LEGO duck when he wakes up tomorrow. (I might need to modify it to add a Powered Up hub & motor, creating a remote-controlled quacking duck!)

Especially when we remember that this is a specialty set aimed at guests of The LEGO House, I’m pleased to give the set our Excellent (4/5 star) rating. If you have the opportunity to visit the history collection at The LEGO House, or love classic wooden toys or ducks, you should seek this set out!

What do you think of this cute wooden duck—Is it enough to tempt you to visit Billund (or convince a friend to pick one up when they go)? Let us know what you think by leaving a comment below!
The LEGO Group provided this set for the purposes of this review. The opinions in this article are strictly my own—providing sets for review does not guarantee a positive review. Photos in this article are by Tom Alphin unless otherwise noted. Visit the About page for more info about our journalistic standards and affiliate programs.

The LEGO House invited LEGO Fan Media to participate in a live Press Release on Wednesday, June 17, 2020. Afterwards, we had a chance to do a brief interview with both the set designers and historian.

Note: In the sections below, I have combined topics from the press release and my Q&A session for easier reading. Since I did not record audio/video from my interviews, the responses by the LEGO Employees are in my own words.

Stuart is a LEGO Designer for The LEGO House itself, and he produced the prototypes for this model. They were adapted into the final set by LEGO Set Designer Jme Wheeler, who joined The LEGO Group recently from the Fan Community. #40501 The Wooden Duck is Jme’s first LEGO Set release!

Brick Architect: Can you talk about how you translated the gentle curved shape of the original wooden duck to LEGO bricks?

Stuart: I studied the original wooden toy to make an accurate copy, as closely as I could. There was lots of trial and error to get the sweeping curves using the elments we have, and I tried to use existing shapes and colors. We also created prototypes of two options for colors, a version very similar to the final set, and a more brightly colored alternative. 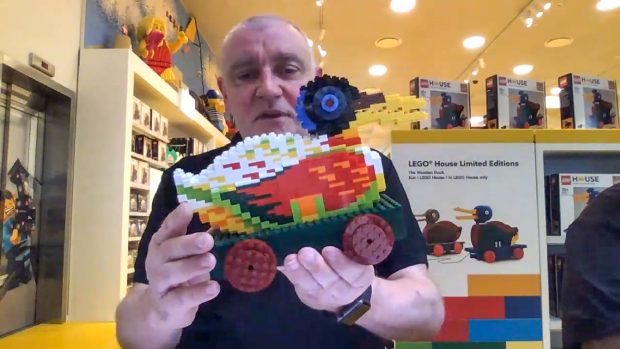 Brick Architect: How does the mechanical mechanism work in the Wooden duck, and in the LEGO Model?

Stuart: The wooden duck used a rigid wire. For the LEGO model, there was a lot of experimenting with different mechanisms for the quacking mechanism, including a Technic Axle and Technic Beam. 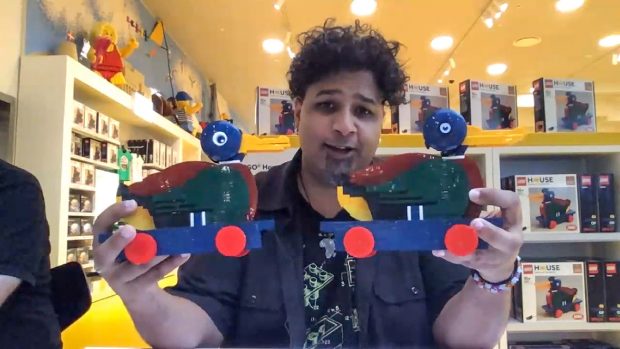 Brick Architect: What was the trickiest part to deisgn so it could be easily built at home using the instructions?

Jme: The decision to make the wings separate kept the building process more concise. It took some time working with the people who design the instructions to ensure that the steps are explained as easily as possible, using from the bottom to the top, and the left to the right.

Brick Architect: Amongst all of the wooden toys that LEGO produced, why did the wooden duck specifically become so iconic?

Signe: The duck is tied a story where LEGO founder Ole Kirk Christiansen asked his son Godtfred to lacquer a batch of Wooden Duck toys three times, then package them and take them to the train station for pick-up in the morning. After applying two coats, Godtfred was convinced that they looked great, so he packed them up and took them to the train station. He was proud that he saved some money on a third coat of lacquer, which he proudly told his father. Ole was not pleased, so he made him go back to the station, apply that 3rd coat of lacquer, and re-package the ducks even if it took all night. This story is often used to explain the meaning of the company motto that “only the best is good enough”.

The wooden duck was not the first wooden toy made by LEGO, but it became a symbol of striving for perfection. While less prominent in public-facing materials, it is commonly used within LEGO to celebrate important events and anniversaries. 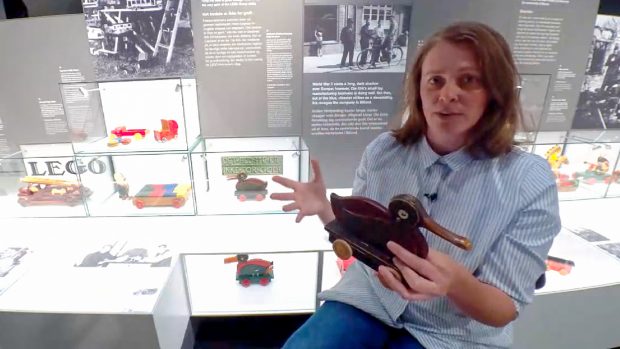 Brick Architect: Did the wooden duck come in a wide range of sizes, shapes, or colors, or were they all more or less the same?

Signe: There were multiple templates used to create the wooden ducks, and they were painted in a range of different colors. Some were spray painted, using stencils to achieve the patterns, while others were hand-painted.