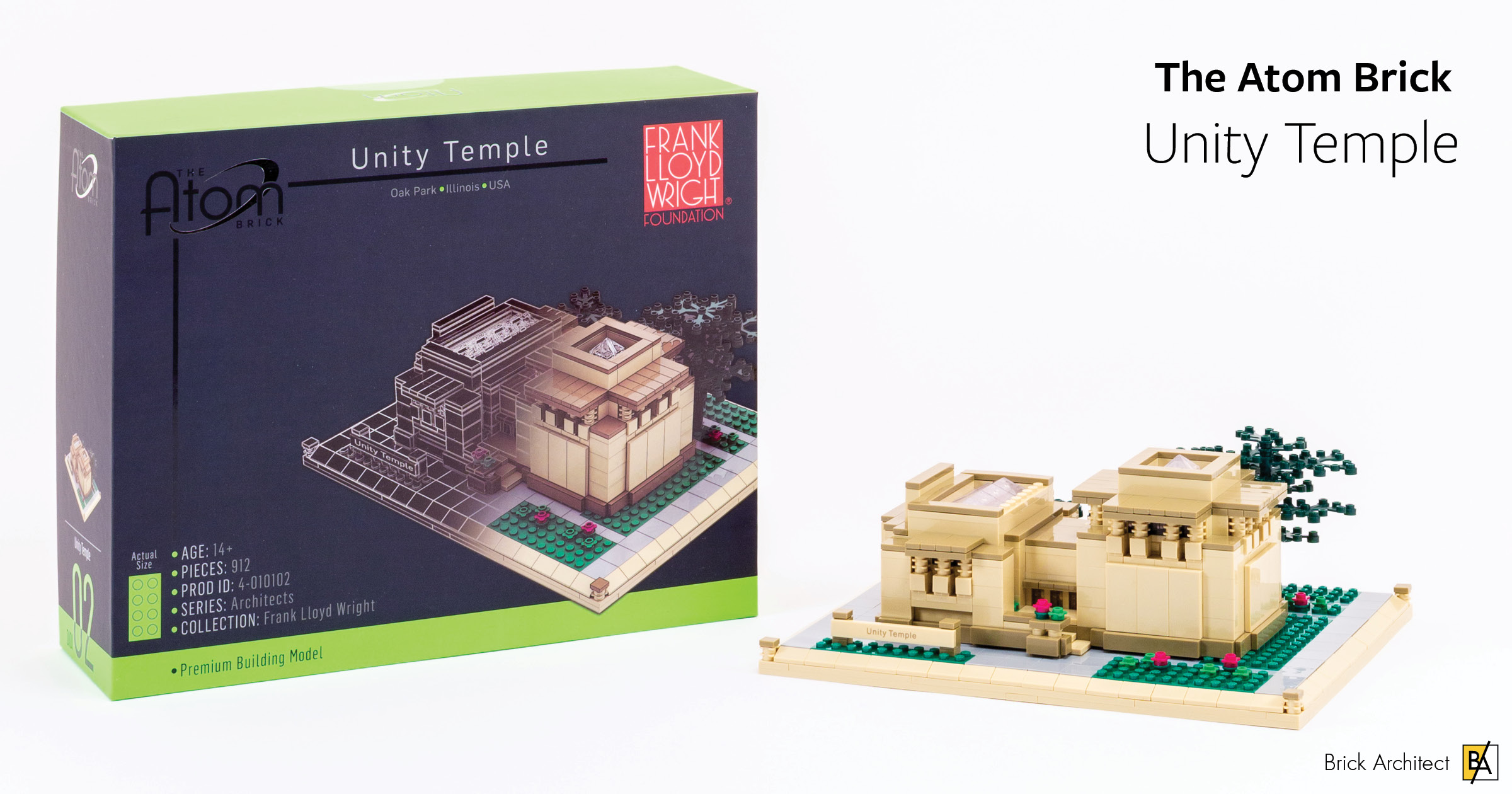 This is the first of three new architecture sets by The Atom Brick (using ¾ sized LEGO-like bricks.) Let’s find out if the model compares favorably to recent sets in the LEGO Architecture series.

The bulk of this review will focus on the Unity Temple model itself, comparing it to sets from the official LEGO Architecture series. Naturally, I will also touch on the packaging and design, plus offer my first impressions of the smaller ¾-sized bricks which are manufactured by a company called LOZ.

The Unity Temple set by The Atom Brick is $74.99 and contains 912 pieces. That’s $0.08 per piece, which would be a good price for genuine LEGO bricks (but remember that this set contains ¾-sized bricks that are not produced by LEGO and are not LEGO compatible.) 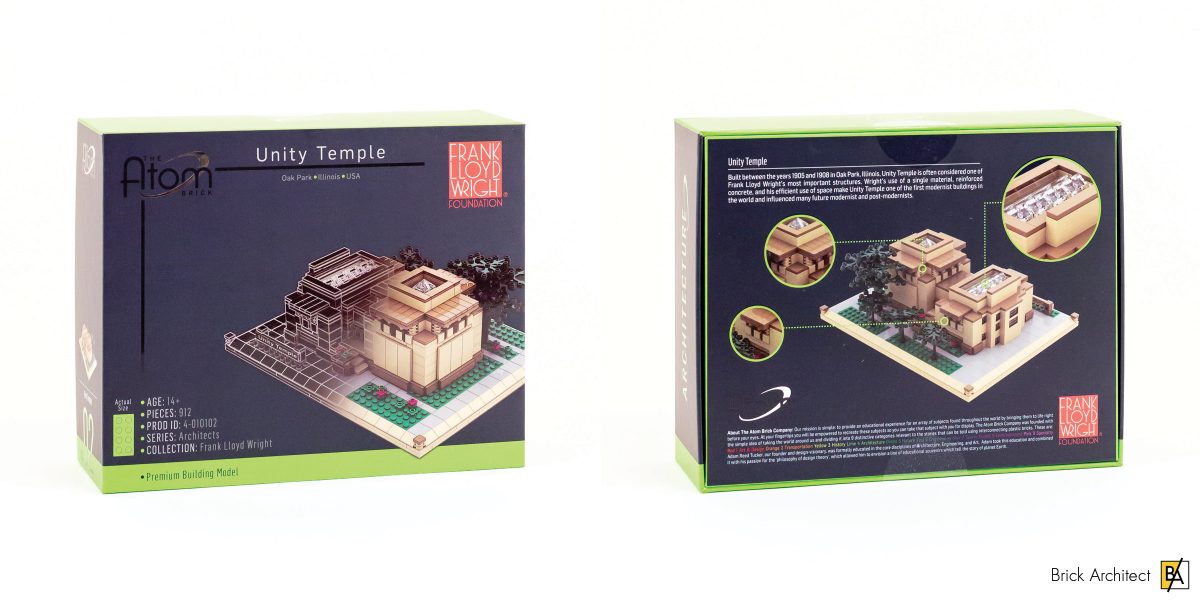 Unity Temple – Front and Back of the premium packaging by The Atom Brick.

My primary motivation in reviewing some of these new sets by The Atom Brick is to continue exploring famous architecture by building. I have to admit that my initial impression of this model of Unity Temple was not very positive because the model looked blocky and a bit boring. This impression was reinforced by my experiences visiting the real building three times. I only find the building’s exterior moderately interesting, but the interior is delightful to explore and features beautiful geometric patterns based on the primary massing of the balconies, as well as the intricate details of wood and stained glass. I was cautiously optimistic that the model would capture some of the magic of the real building.

The set includes seven bags, but they are not numbered to coincide with different stages of the build process. This is not strictly-speaking necessary for a set with around 1000 pieces, but does slow down the build process a little. More importantly, I can’t rely on the numbered bags to structure my review!

Seven bags of parts and a hardbound instruction manual.

Similar to sets in the LEGO Architecture series, the build process begins by assembling a sturdy base. That said, there are a few important differences that I wanted to highlight. 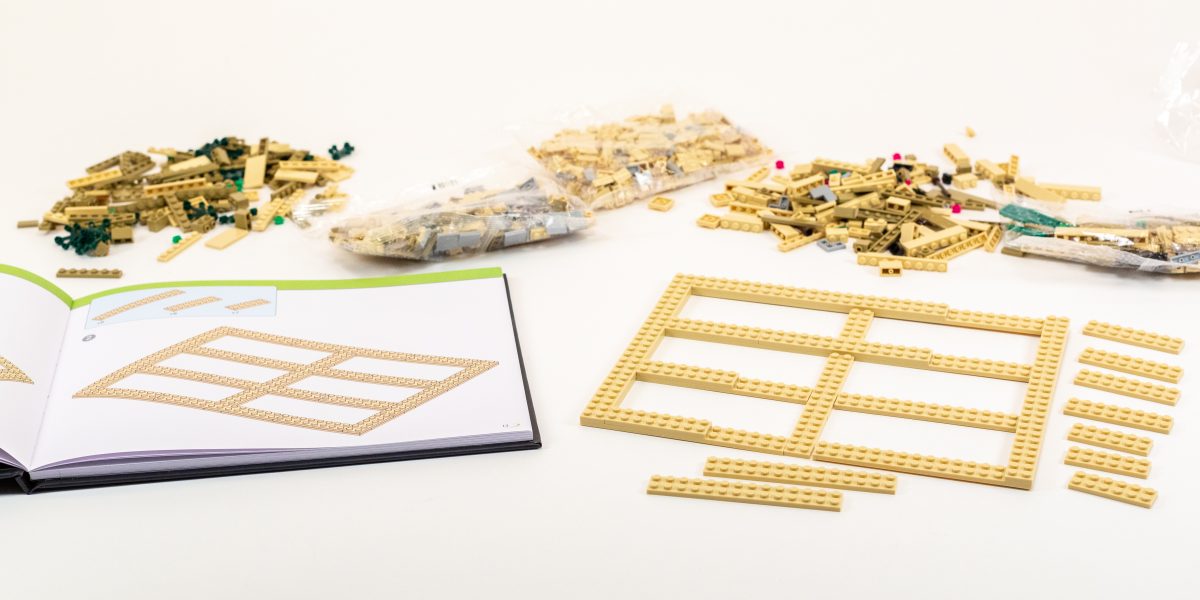 The base uses a two-layer lattice of tan plates.

The first difference is structural, as the base is four plates thick instead of the three plates we have grown to expect in the LEGO Architecture series. An additional layer is added to the base itself, resulting in a rigid two-layer lattice beneath the plates, instead of just one layer beneath the structural support plates.

While this might also be an aesthetic choice, I believe the additional layer of plate is attempting the reduce upward curl of the base due to the thinner, smaller parts, and/or slightly lower tolerances compared to LEGO bricks. (Official LEGO Architecture sets sometimes have this problem too, but have one fewer layer of plate on the base.)

The base is a little different than what we’ve grown to expect with the LEGO Architecture series.

The second difference is purely aesthetic; instead of using black 1×6 and 1×8 around the edges, 1×2 Double Cheese is used around the entire perimeter, with a pair of 1×1 Flower elements on each corner. This is much more time consuming to assemble, but does cover the edges of the top layer of Tile and Plate.

The building goes up quickly, with a lot of Dark Tan elements near the base. We do see a lot of SNOT bricks in these early stages, with outward-facing plates giving it a more subtle shape and smooth exterior. 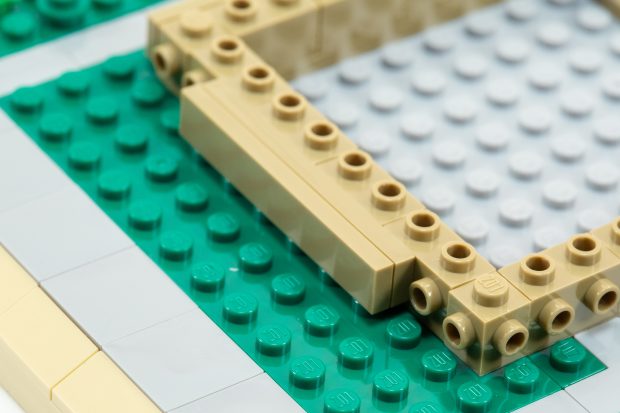 I did encounter some “illegal” building techniques, due to the fact that LOZ bricks and plates have the same quirk as LEGO bricks—the letters on the studs are raised, making the stud slightly taller than ½ of a plate. This causes the ‘LOZ’ letters to interfere with any SNOT techniques used right above it. I’ve included a photo showing how the the SNOT bricks are forced slightly backwards by the pressure. This was a problem in several places around the base of the exterior. 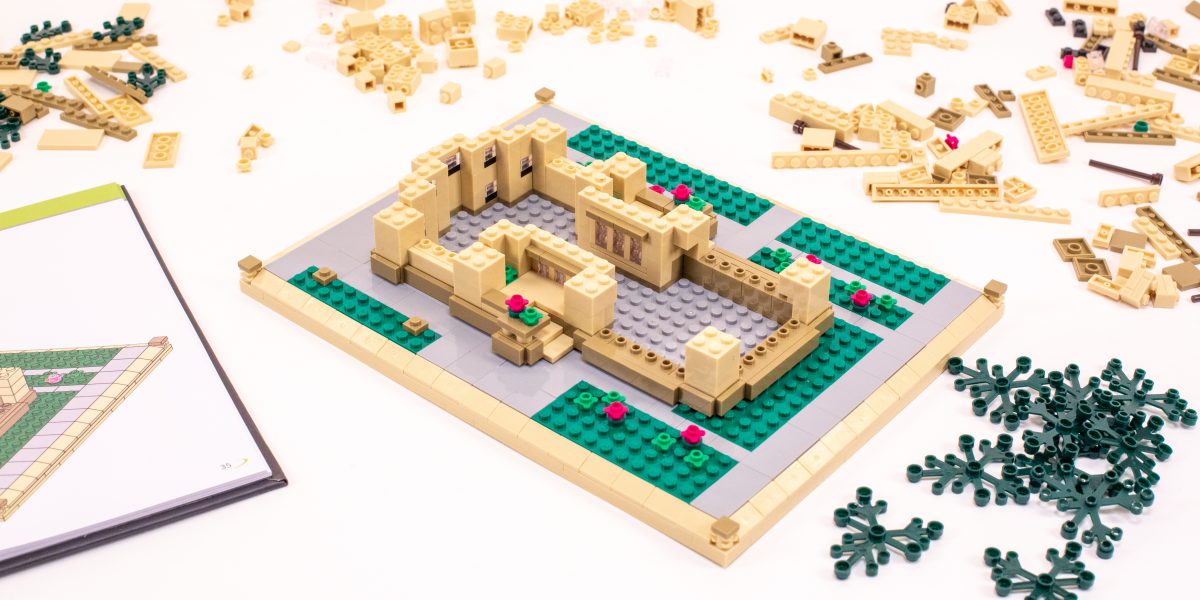 Progress as we complete the first floor.

I wrapped-up this section of the build with several nice SNOT and jumper offset details. I especially liked how well the model captures the enclosed patios on both sides of the model, which is where the entrance is “hidden”. In addition to a module of 40Transparent Trans-Clear and 5Brick YellowTan 1×2 plates attached using SNOT techniques, four jumpers are used above the doorway to create a half-stud overhang.

The entrance is partially hidden from the street by a small raised patio.

The last stage of the build is slow and tedious, but it’s also satisfying because we get to assemble some of the most beautiful details of the building such as the upper windows, skylights, and the roof with it’s iconic large overhanging eaves. 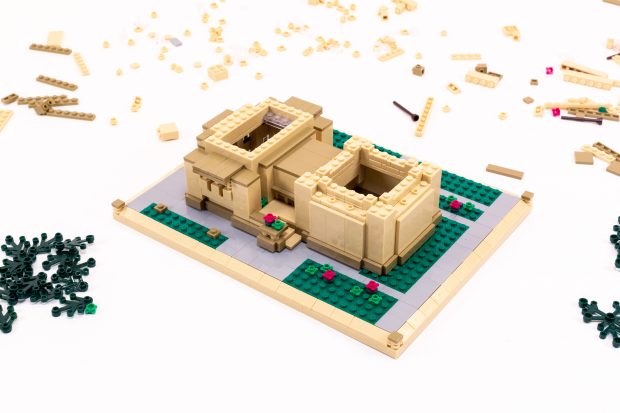 With the Meeting House almost complete, we’re ready to add the upper windows to the Sanctuary.

A common activity when building LEGO Architecture sets is to carefully stack 1×1 elements. This task is a lot more difficult with the tiny LOZ bricks, and even worse when the parts you are stacking are 1×1 Flower w/ 4 petals; the petals are sharp at this small size! 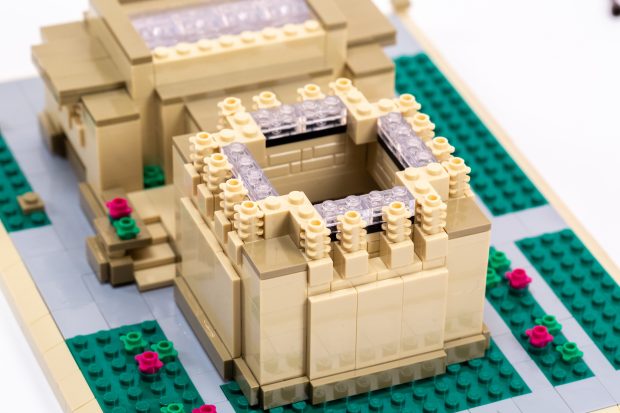 No joke! My fingertips still hurt from stacking all of those 1×1 Flowers yesterday.

I did experience a few issues with the building instructions near the end of the project. Most notably, the walls of the building were not attached to one another until near the end of the project, so I had a few cases where a section of the wall popped out while trying to attach a different section. They are locked together nicely at the end, but could have been better attached in the first place. I also noticed a few minor issues with the building instructions, such as indicating that the step required 1×4 tiles when it really required 1×3 tiles. 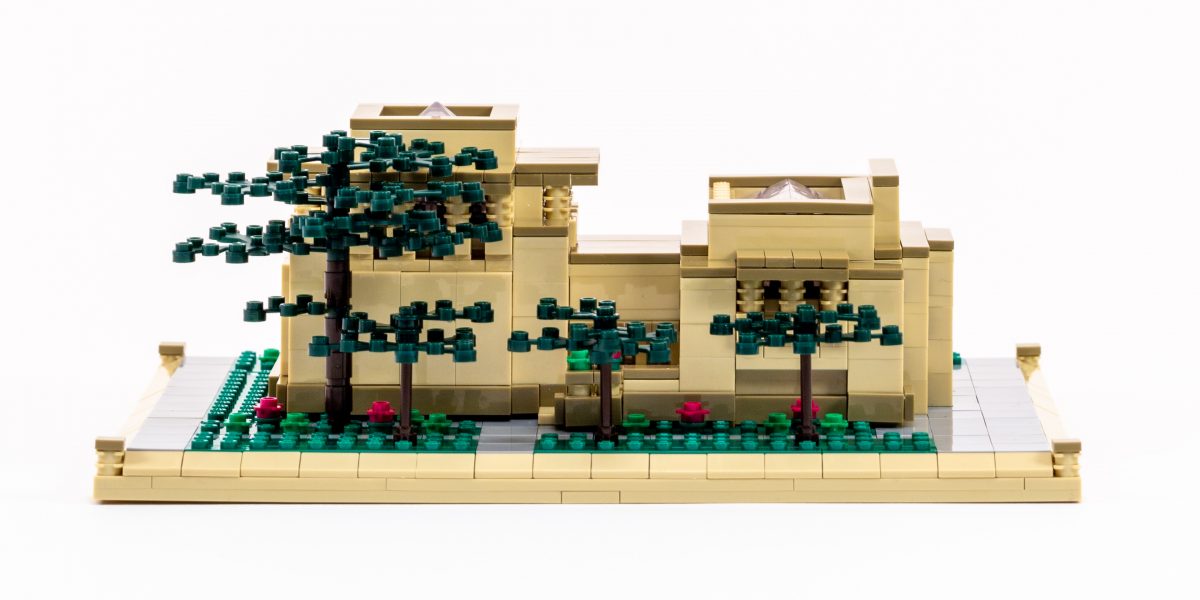 I did not enjoy building the trees.

It’s never good to end on a low note… The final step is to assemble a row of trees, but they are very difficult to build. The first challenge is that it’s hard to see exact orientation of the leaves from the instructions. The bigger issue is that the tolerances on the LOZ bricks aren’t quite good enough to allow you to slide the 1×1 Round Bricks and Leaves onto the flag poles. I also did not like that the tallest tree isn’t quite tall enough, so the leaves are resting on the roof of the building.

This was my first time building with the smaller LOZ bricks. The quality is not quite as consistent as LEGO bricks, but it’s a lot better than other brands I’ve tried. As I noted earlier, the smaller parts are more difficult to assemble, which made the build time slower than I would have expected for a set with fewer than 1000 bricks. 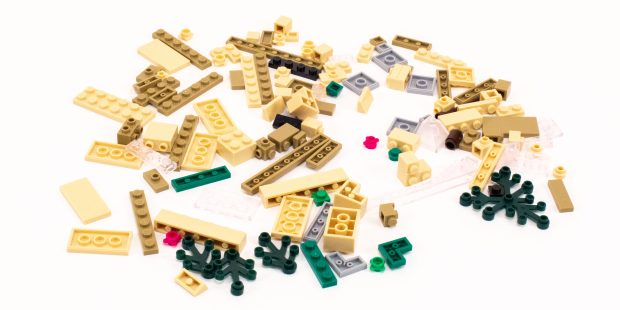 I did not have any missing parts. In fact, I had a huge pile of extra parts after completing the model!

Just ¼ smaller doesn’t sound like much, but I want to be clear—LOZ bricks are really tiny! When the packaging indicates that they are ¾-sized, they mean that every dimension is ¾ compared to what it would be with regular LEGO bricks. Because bricks are three-dimensional rather than one-dimensional, I’ve calculated how much smaller they are based on volume instead of length below…

Comparing LEGO vs. LOZ by volume:

While the LOZ bricks are of generally good quality, I wanted to call out a few issues that I noticed. The first problem is that they clearly have two moulds for 1×2 Cheese, since one of them has a visible gap along the back edge and the other mould does not. (This is noticeable along the edge of the base.) Also, in my previous interview with Adam, he already explained that the plates are slightly too thick. I already mentioned that the trees were hard to assemble because the flagpole is slightly too thick. Lastly, I did encounter two bricks and one tile with one edge which was pretty sharp. (The rest of the parts were perfectly moulded.)

As for the colors, they are a very close match for the equivalent LEGO colors. I should point out that this model will be challenging to re-create using genuine LEGO Bricks, as it relies on several parts which are rare or non-existent, most notably large plates in 40Transparent Trans-Clear such as 2×4, 6×6, and 4×8.

The model faithfully explores an iconic early Frank Lloyd Wright design, and includes some details to help you understand the building better. The completed model is equal in detail to #21017 Imperial Hotel, and even leverages some similar building techniques.

That said, I would have loved to see the model include a removeable roof to help builders understand the interplay of the interior volumes and exterior features, but this is unfortunately not included in the model.

The packaging has a premium feel.

Because this is not a LEGO set, I was curious to learn about the packaging choices and cautiously optimistic about the quality of the smaller LOZ bricks. Thankfully, both exceeded my expectations… The bricks are a bit too small to be ergonomic, but are otherwise well moulded with sufficient clutch power. The packaging and instruction booklet exceeded my expectations: the box is sturdy, glossy and very heavy, and the instruction booklet is actually a hardbound book. I would have preferred glossy pages, but the graphic design choices are acceptable and the print quality is good. 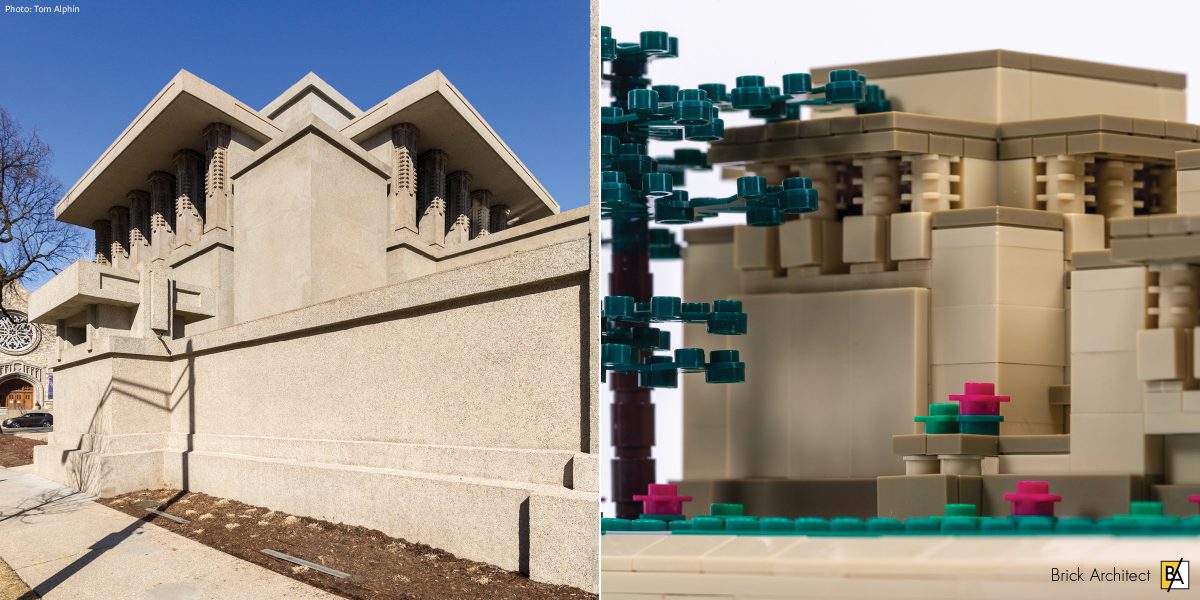 Comparing the model to the real building.

If this were an official LEGO set, many of the minor problems outlined in the article would have been resolved during their formal review process, and it would easily earn our Recommended (4/5 star) rating. Even with these quirks, my preference for LEGO bricks over these miniature LOZ bricks, and the relatively high price, the Unity Temple set by The Atom Brick earns our Good (3/5 star) rating. 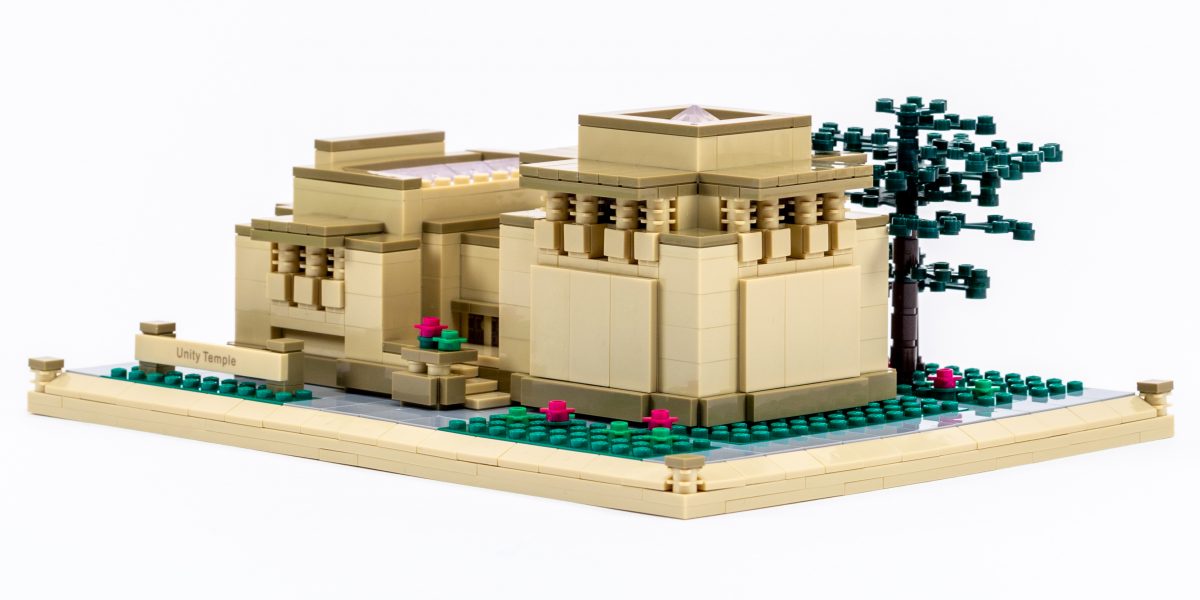 Unity Temple, by The Atom Brick.

This brings us to the most important question—should you add Unity Temple to your collection? The honest answer is maybe; it really depends why you were drawn to the LEGO Architecture series in the first place. It’s a hard sell for Die-hard LEGO fans, but might be an easy decision for casual LEGO fans that love serious architecture.

As for me, I have to admit that the recent focus on Skylines and famous landmarks over important architecture has been a dissapointing evolution for the LEGO Architecture series. Maybe these serious new kits will remind The LEGO Group to go back to making sets based on architecturally important buildings.

If you’re bored by recent additions to the LEGO Architecture series, and don’t mind trying the LOZ mini bricks, you might want to give Unity Temple by The Atom Brick a try. (You can buy it at Amazon.)
The Atom Brick provided this set for the purposes of this review. The opinions in this article are strictly my own—providing sets for review does not guarantee a positive review. Photos in this article are by Tom Alphin unless otherwise noted. Visit the About page for more info about our journalistic standards and affiliate programs.