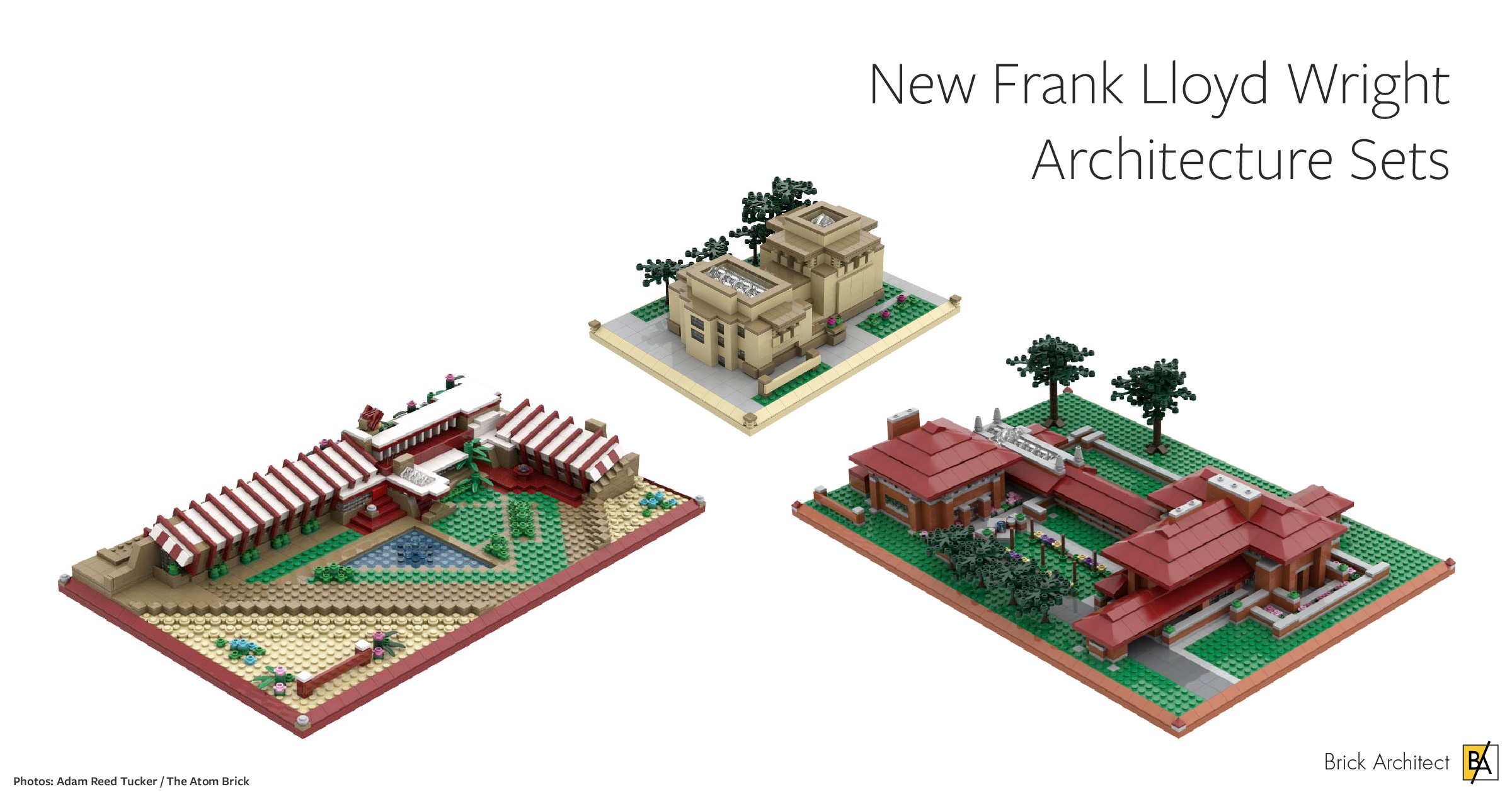 If you love it, let it go… This sentiment echoed through my conversations with Adam Reed Tucker about his journey; from creating the LEGO Architecture series in 2007, becoming a LEGO Certified Professional in 2008, and regrettably letting it go to pursue his vision by founding The Atom Brick.

In this article, we will learn more about the first three new architecture sets by his company The Atom Brick, and look back at Adam’s history with LEGO and Architecture. (Quotes are from my interview with Adam on February 6th, 2020.)

The main reason for this article is to learn more about three new architecture sets based on famous buildings by Frank Lloyd Wright. All three are new designs which have not been included in the LEGO Architecture series, making them especially interesting to fans of the series.

To be clear, these sets are not made by The LEGO Group, and do not use LEGO Bricks. (I’ve included more information about the 3/4 sized bricks later in the article…)

The Martin House is the largest estate home that Frank Lloyd Wright designed in the eastern United States. The home has been restored, but the conservatory and carriage house were rebuilt in the 1990’s. It is considered one of the finest examples of his Prairie Style. 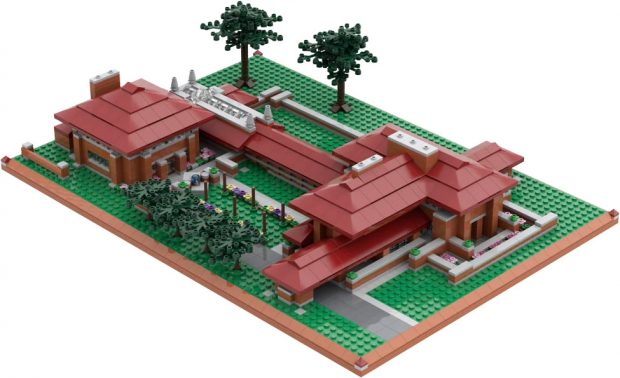 The front facade of the home has some similarities to the Willits House, which inspired the small Prairie style model with instructions that you will find in my book, The LEGO Architect.

You may notice some similarities to Robie House, such as the gently pitched roof, large overhanging eaves, and integrated patio spaces. This is not surprising, since both buildings are part of the Prairie Style, and Robie House was built just 5 years later in 1909.

Taliesin West is the sprawling complex which Wright used as his home, studio, and school during the winter months. It’s more angular features reflect the evolution of his architectural practice from the largely rectangular forms of his Prairie Style to more expressive geometric forms. 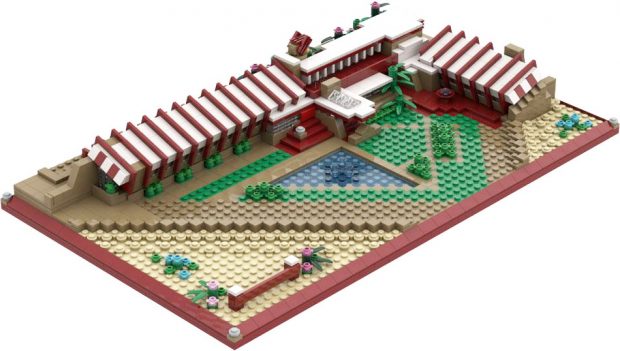 The model of Taliesin West uses 1763 pieces, and focuses on the section of Taliesin West surrounding the triangular pool, which includes the Drafting Room, Dining Room and part of the Apartments.

The entire complex is so large that it is not practical to re-create in a commercially available set. That said, Adam designed and built a gorgeous 4’×8′ model of the whole complex in 2015, which was on display at Taliesin West for several months. You will see many similarities between the new set and his larger model, even though the scale is much smaller.

April 17, 2020: Check out our detailed review of the Taliesin West set by The Atom Brick or buy it at Amazon.

Frank Lloyd Wright’s design for Unity Temple is very unusual for churches built in this period, with no steeple, relatively little exterior decoration, and a difficult to find entrance. Once inside, the building is a joy to explore, with lots of natural light coming through art glass windows and a huge central skylight. 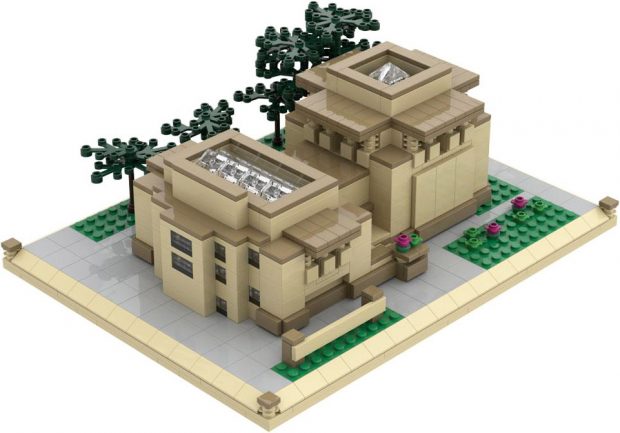 The smallest of the three new models, it uses just 912 pieces. It includes both Unity Temple, and the adjacent Unity House which is used as a meeting room and for sunday school. The building is a natural fit for plastic bricks, since it has a very regular, rectangular form.

February 24, 2020: Check out our detailed review of the Unity Temple set by The Atom Brick or buy it at Amazon. In addition a detailed analysis of the model design, you will also find an honest assesment of the tiny LOZ bricks.

Brick Architect: Why did you decide to create models of these three buildings first?

We wanted to come out with three models [and] not to compete with LEGO. I wanted to make sure we did models I hadn’t done before to start the line. We are doing three more for the summer that haven’t been done before either.

Honestly, I plan on doing as many as it makes sense to do… At some point, I don’t see why we wouldn’t get around to doing 40 or 50 different models [of Wright’s buildings] when it’s all said and done.

Brick Architect: You are clearly drawn to the work of Frank Lloyd Wright… Why do his buildings speak to you so strongly?

I know it’s going to sound cliché, but I like a lot of different architects… Michael Graves, Adrian Smith, Greene & Greene, Arquitectonica, Morphosis, [Zaha] Hadid; I mean there’s a lot of different ones. But I don’t think any one has the breadth of portfolio of meaningful architecture as Frank Lloyd Wright does.

He is, in my opinion, the first architect that didn’t ascribe to form follows function… I’ve [visited] enough of his architecture and know enough about philosophy of design theory (which is my understudy) to know that … function can follow form. … He was more about creating spaces to stimulate different aspects of how you live your life.

He was original. He was an inventor, innovator, and creator of architectural styles which balanced scale, proportion, harmony, rhythm, color, use of materials, use of outdoor vs indoor, the natural [and] the built… How they dance poetically with each other. I feel like [only] Santiago Calatrava is an organic architect equal to Frank Lloyd Wright.”

Brick Architect: The packaging for these models show the Frank Lloyd Wright Foundation’s logo. Can you tell me more about your partnership with them?

Brick Architect: Are there buildings by other architects which you would like to create in the future?

I can tell you that I’m working on Corbusier, [the] Charles and Ray Eames House, Barcelona Pavilion [by Mies van der Rohe], Glass House [by Philip Johnson], and just finished Saint Louis Arch by Eero Saarinen. I don’t think I’ll end up doing any Michael Graves work because … it’s virtually impossible to do out of bricks. [I might also] do some Bauhaus stuff.

Brick Architect: Can you tell me more about other themes beyond architecture that you want to explore with The Atom Brick?

I’ve also got 8 other categories I got to fill out. We have about 20 designers right now that were working with … and I’m always looking for more designers to help with creating subjects that fall in the other areas [such as] Transportation, Nature, History, and Engineering. [Designers will get] a percentage of sales of the set in perpetuity.

About The Atom Brick

Adam’s new company The Atom Brick uses bricks supplied by LOZ, which have the same proportions as LEGO bricks, but are ¼ smaller (making them incompatible).

Adam’s reason for working outside of The LEGO Group is simple: “Finally, I have the freedom to operate. I can create any color, any shape I want. Yes, it’s not with the LEGO brick, but… the subjects are just so much more important to me to explore than the brick.”

Adam was forthcoming that the bricks aren’t quite perfect, but is working with the manufacturer to continue improving the quality over time. He said “based on doing SNOT studies … the 1×1 plate is a little taller, like ¼ of a millimeter taller than it should be.”

I also learned that you may be able to build these models using LEGO bricks instead; He indicated that “I don’t think there are any elements in these sets that LEGO doesn’t make.” (That said, the parts might not be available in the color you need.)

Note: In researching this article, I learned that LOZ has a mixed reputation. While their tiny bricks are of good quality, many of the sets they produced in the past were copies of official LEGO sets, including many LEGO Architecture series that Adam designed!

When I talked with Adam, I learned that he worked with LOZ to stop producing copies of other people’s designs in 2018. I asked LOZ why these sets are still available for purchase, and they indicated that those “products that can be still found on the market were all produced prior to 2018”. I also asked why it is so easy to find lozshop.com (a fake site) but difficult to find their real site at loztoys.com – “we have been in contact numerous times but the process is more difficult as the owner is located in Vietnam and is nonresponsive”.

Naturally, the transition to respecting copyright laws has created new challenges. I asked if they explored a buy-back program for old inventory, and was not surprised to hear that “most of those agents stopped communicating and cooperating with us after we stopped producing the unlicensed sets”.

Quotes are from an email exchange with Horace Chen on February 17, 2020.

Adam was an architect in Chicago when the real-estate downturn in 2006 caused him to consider new opportunities. As outlined in the 2014 book LEGO Architecture: The Visual Guide, he “visited a Toys R Us, filled 11 shopping carts with LEGO sets, and set about refamiliarizing himself with the bricks he played with as a child.”

With these bricks, Adam built several large-scale models of iconic skyscrapers which he shared with other LEGO enthusiasts at LEGO conventions (such as Brickworld Chicago, which he co-founded in 2007.) Recognizing that LEGO can help people understand and appreciate architecture, he designed smaller versions of two iconic Chicago skyscrapers. 1250 hand-packed sets based on the Sears Tower and John Hancock Center were produced with a little help from The LEGO Group, and sold to fans as a proof-of-concept. 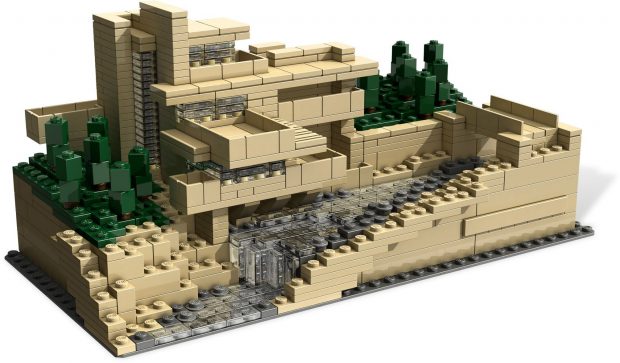 The line was broadened in summer 2009 by the addition of two iconic buildings by architect Frank Lloyd Wright: #21004 Solomon Guggenheim Museum, and #21005 Fallingwater. This began Adam’s relationship with the Frank Lloyd Wright Foundation.

Adam also became LEGO Certified Professional in 2008, which allowed him to continue building massive 1:200 scale models for display in his touring exhibitions around the world. (We reviewed his ‘Brick by Brick’ exhibit in 2016.) 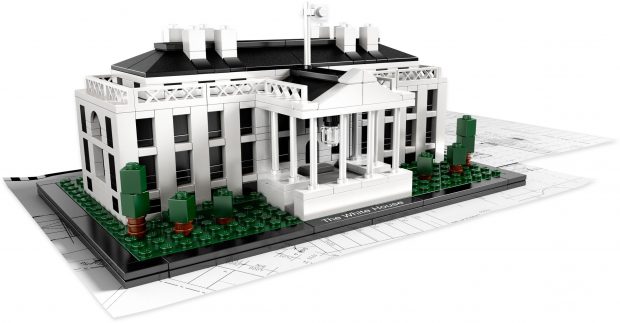 The majority of other sets in the LEGO Architecture series were designed by Rok Žgalin Kobe, who we interviewed in 2018.

In recent years, Adam founded the Blocks to Bricks museum just outside of Chicago which opened in 2018, and founded The Atom Brick in 2019.

Are you excited to build more Frank Lloyd Wright buildings using plastic bricks? Please consider buying these sets by The Atom Brick at Amazon using these links… it helps!