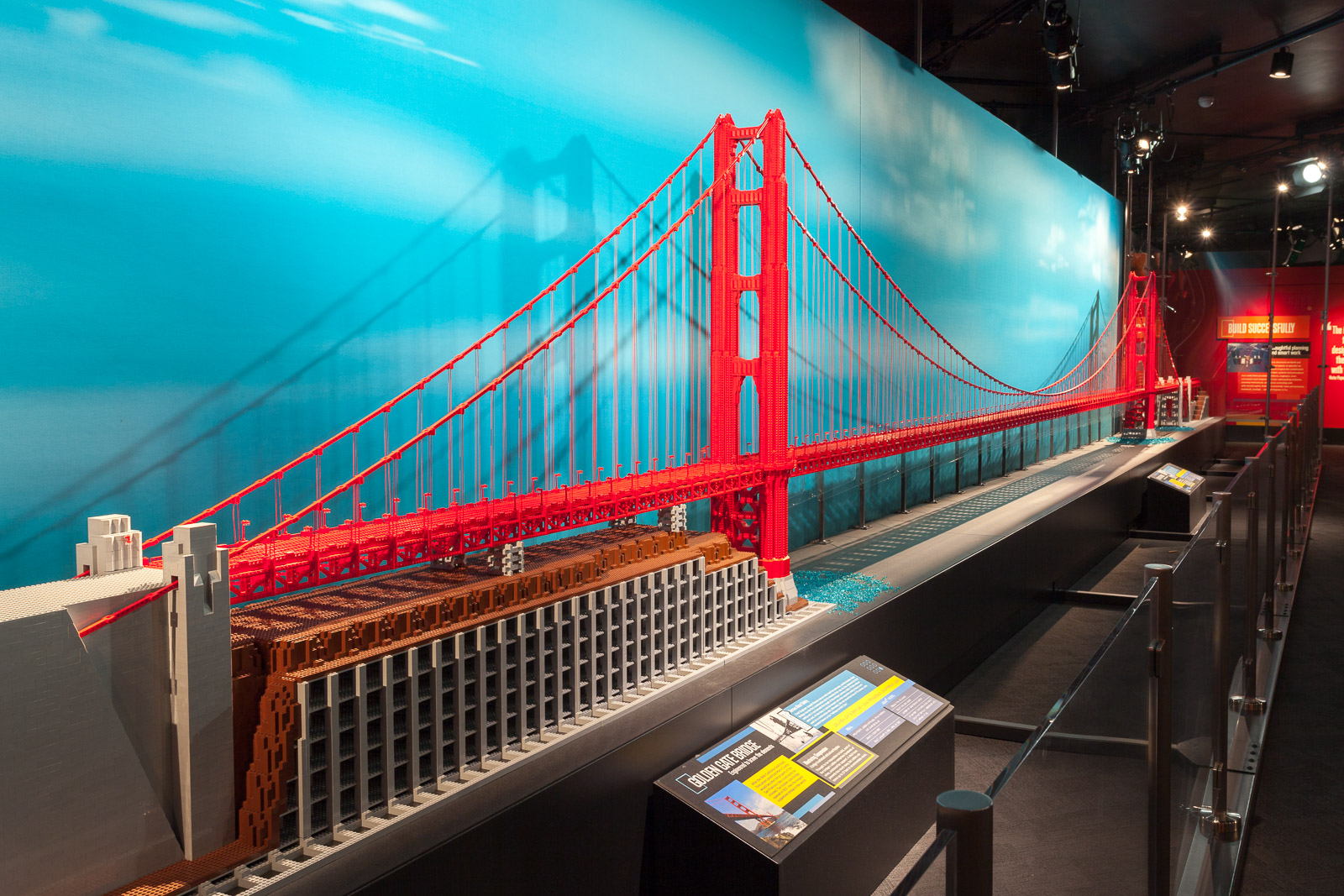 This exhibit at the Museum of Science and Industry in Chicago, IL features models of the Golden Gate Bridge, the Great Pyramids of Giza, the Disney Castle, and more.

While in Chicago for the Brickworld 2016 LEGO Convention, I had a chance to meet Adam Reed Tucker and talk with him about his work including his new Brick by Brick exhibit at Chicago’s Museum of Science and Industry. Adam is an LEGO Certified Professional, and the exhibit exhibit features a diverse collection of amazing models. A warm welcome to ‘Brick by Brick’ when you enter the Museum of Science and Industry, Chicago.

Adam’s education and career began in Architecture, where he was a practicing architect for several years before the LEGO brick caught his attention leading to a career change. The large scale LEGO Skyscrapers that Adam built earned the respect of the LEGO company, earning him a position as one of only 14 LEGO Certified Professionals.

His previous touring exhibit focused just on Skyscrapers, which he built at a scale of 1:200, resulting in towering models that dwarf visitors to the show. For those exhibits, he used a consistent scale for all of the models so viewers can compare the relative size of skyscrapers from around the world. Autograph by Adam Reed Tucker of his model of Taliesin West, as it appears in The LEGO Architect.

Adam’s work is featured in my book: The LEGO Architect. This includes a model of the Transamerica Pyramid (pg 129), some design sketches for the Coliseum and Chrysler Buildings (pg 172), Fallingwater (pg 176), and a Builder Profile on page 177.

The LEGO Architect is published in English, Français, & 日本語.

“Brick by Brick” is a new exhibit by Adam which goes in a different direction. Rather than focus on just Skyscrapers, he wanted to explore history, architecture and engineering through a wide variety of impressive LEGO models. This exhibit departs from his strict adherence to the 1:200 scale, allowing him to build each model at the scale which best explains each landmark.

The most imposing new model in the gallery is an beautiful 60-foot long model of the Golden Gate Bridge in San Francisco, CA. The huge bridge span is built using only LEGO bricks and string – no hidden steel supports are needed. (For safety purposes, a few clear plastic supports have been installed in the museum, but Adam assured me that it really works!) Adam explained to me that his favorite detail in this model is the use of outward facing LEGO studs throughout the model which are representative of the thousands of bolts which were used in the construction of the real building. He went on to admit that LEGO studs are far too large to represent real bolts, but his goal for the model is to explain the engineering which makes the bridge work, so the exaggeration is well deserved.

Another highlight from the show is a large model of the Hoover Dam where he shows one side of the dam in its completed form, and the other side showing how it was built. I really enjoy this approach, as it highlights how the dam was built, and how the water is transported through massive tunnels to power the hydroelectric generators at the base. A similar cut-out approach is used to explore both the exterior and interior of the great Pyramids of Egypt.

Two impressive Skyscrapers are included in the exhibit to appeal to architecture enthusiasts like me, and they don’t disappoint! An impressively tall re-creation of the world’s tallest skyscraper, the Burj Khalifa in Dubai, which barely fits in the very tall room housing the exhibit. I find it striking how effectively Adam captured the complex form using only very common LEGO Elements such as 1×1 round brick and 4×4 round plate, but in huge quantities. We also get a model of the new One WTC building in New York City, which is built using a massive quantity of clear bricks to a very neat effect.

I also enjoyed seeing his large model of Fallingwater which is built in a very simple style reminiscent of architectural models. It’s big enough that you can really see how the various volumes and cantilevered planes come together in the final design of the building. Other models which round out the exhibit include a model of the Ping An skyscraper which will be the tallest skyscraper in Asia when it is completed this year. The LEGO model is also shown under construction, revealing how skyscrapers are constructed. There is also a rollercoaster which actually works that’s based on the American Eagle, a classic wooden rollercoaster at Six Flags Great Adventure which was built in 1981. You will also see the Roman Coliseum, the Gateway Arch, the International Space Station, and the 1893 Palace of Fine Arts which now houses the MSI. Lastly, for the die-hard Disney enthusiasts out there (I know there are a lot of you), the last model you will see is a fantastically detailed re-creation of Cinderella’s Castle at Disneyworld. The model diverges from Adam’s typical style by employing many different colors and smaller specialty parts to achieve the fine details. I enjoyed looking closely at the model to find inspiration for my own models. Little did I know when I visited the exhibit that The LEGO Group would release a massive official LEGO model of Cinderella’s Castle as an LEGO Exclusive. The massive model has 4080 pieces and opens to reveal rooms for your LEGO Minifigures of your favorite Disney characters to hang out. (While I haven’t built the model, it has much the same feel as the Death Star model which is filled with minifigure-scale recreations of the key scenes from Star Wars, A New Hope.) It is a treat to see Adam’s huge and intricately detailed model and the official set side-by-side. The exhibit also features three interactive areas, which can extend your visit a lot. I enjoyed building a tower out of foam blocks on their earthquake simulator, only to see that it didn’t last long. There is also an area where museum staff works with visitors to complete specific LEGO projects, and finally a free build area which contains thousands of white and clear bricks for you to create your own architecture to leave behind for other guests to enjoy. Behind that display, you can see what members of the architecture community created with the same white and clear bricks. Free building area with White and clear bricks in the style of the LEGO Architecture Studio set.

Adam is a talented LEGO builder who understands that his work is more than I think this is an excellent collection of models, and I really like the decision to explore a diverse selection of topics. The lighting and presentation of the models is excellent, although I am afraid that some people might miss the amazing model of Cinderella’s Castle because it is hidden in the back behind the LEGO architecture building area.

While I recommend the exhibit without reservations, I do think there are a couple things that could have been done a little better. The first is that I love how they made a wall showing the LEGO bricks which were used for each model, but they are displayed along a single wall rather than being displayed next to each model. By placing them next to the models, guests would be encouraged to look at the models closely to see where each part is used. This is especially interesting for Cinderella’s Castle, as that model features the most diverse selection of parts and the most advanced building techniques. (I also saw several parts in the model that weren’t actually shown in the parts list.) Wall highlighting the parts used for each model.

The second concern is that I feel like the exhibit relies a little too much on the amazing models themselves to teach architecture and engineering methods, missing the opportunity to reinforce the engineering an architectural concepts which could be expressed through smaller LEGO models, structural illustrations, or other supplemental content. I think these small changes to enhance the storytelling and educational moments could help the exhibit be even more engaging.

About the Museum of Science and Industry

The Museum of Science and Industry is an amazing museum housed in the beautiful former The Palace of Fine Arts which was built as part of the 1893 World’s Columbian Exposition, also known as The Chicago World’s Fair. The fair had the nickname “The White city” since most of the buildings were built inexpensively of plaster, but the building that now houses the MSI was the exception as it was built to last. I did not get to explore the entire museum, but it is huge and contains a lot of really interesting exhibits.

Thanks to MSI for providing complimentary access to the exhibit before public hours to take photos of the exhibit. The opinions expressed in this article are solely mine.