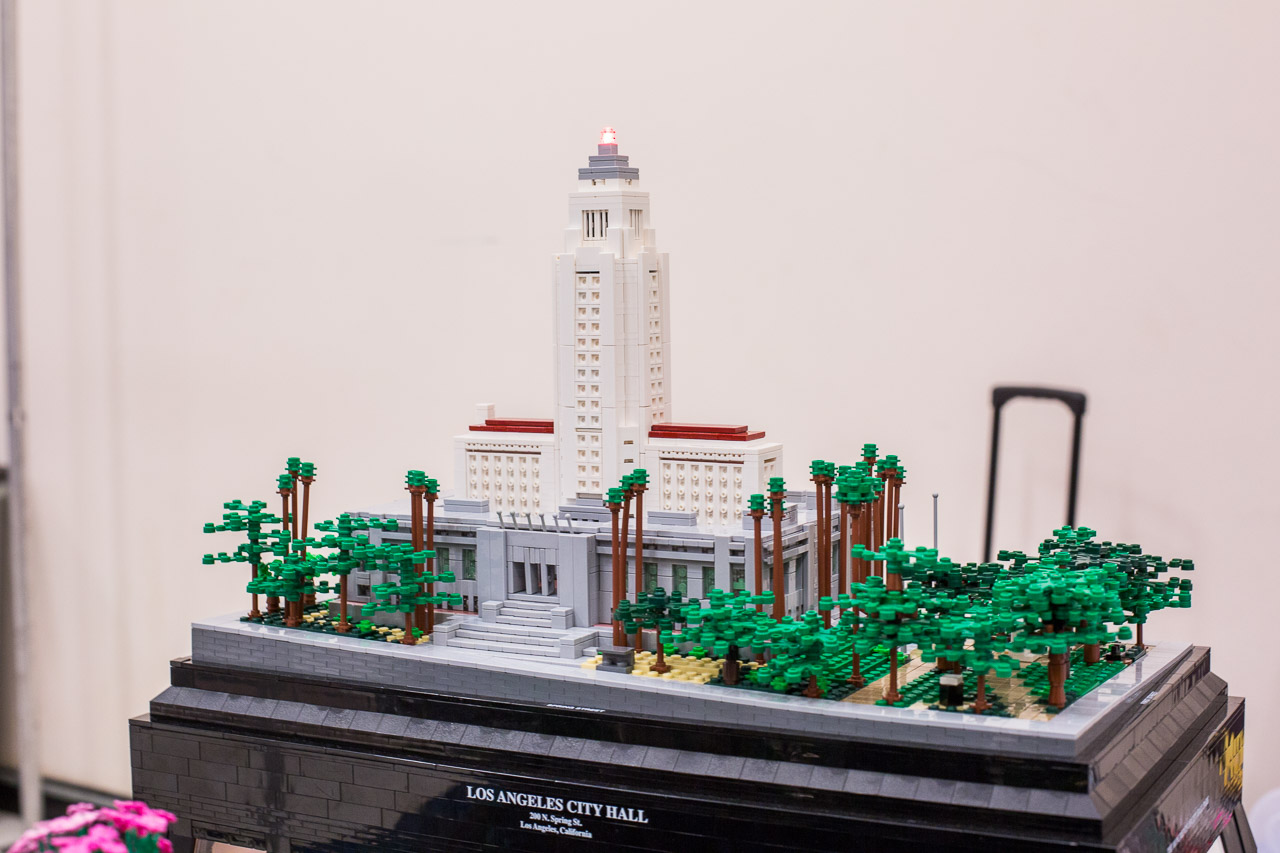 Highlights from the 2016 BrickCon Convention in Seattle, WA – including some really amazing LEGO Architecture creations.

This year marks the 15th anniversary of BrickCon, Seattle’s annual LEGO convention. BrickCon is really two events: During the 2-day “Public Expo”, you pay about 10$ to see amazing LEGO creations made by fans. We typically see over 10,000 attendees across the two days! All of those amazing models are built by LEGO experts who are attending the larger 4-day “Convention”. Most of the 400+ attendees are from the Seattle area, Portland, or Vancouver, but the show includes folks visiting from all around the country and world. The convention includes talks, games, raffle, prizes, the meet-and-greet, and informal parties after hours. Beyond the chance to meet talented LEGO builders and learn from them, one of the greatest benefits is that you have time to see the LEGO models outside of the crowded Public Expo Hours I displayed a few new models at BrickCon 2016, including the Rainier Tower (left) and Torre Cepsa (right). I will share more photos in a future article.

This is my third year attending the 4-day BrickCon Convention. Before that, I visited during Public Expo hours in 2009, 2011, and 2013. To meet builders outside of Seattle and to help promote my book The LEGO Architect, this was also my first year attending LEGO conventions outside of Seattle: Bricks Cascade (February 2016, in Portland, Oregon), BrickCan (April 2016, in Vancouver, BC), and BrickWorld (June 2016, in Chicago). It should be no surprise that my favorite theme is Architecture, and I’m pleased to say that we had some excellent architectural models on display at BrickCon this year. Most of them were displayed in the “Architecture” theme, although I also saw awesome buildings in Castle, Town and even the Space themes. I’ve posted a few of my favorites here, although you are welcome to browse my 48 photo gallery on Flickr. One of my favorite models in the Architecture theme was this intricately detailed model of Los Angeles City Hall, by Bruce Keller. The model itself isn’t that large, but he decided to put it on a pedestal to tell the history of the city and building through small vignettes in the base. The model also rotated slowly which was awesome, and he had an red LEGO lighting up the tip of the tower. It is an exceptional model. The other highlight of the architecture theme was this LEGO model of The Norwegian National Opera building in Oslo, Norway by Justin Marx. It is a beautiful contemporary building flanked by water on two sides. The LEGO re-creation captures the gentle slopes beautifully. While it was displayed in the Castle theme, this massive model of Mont Saint-Michel in northern France was a treat to see, especially since we visited this UNESCO landmark a few years ago. The architectural detailing on this model is good, and the large scale is very impressive! While not architecture per se, the collaborative build called WACKTRON had great detailing, a retro feel, and an Architectural scale. Paul Hetherington always brings a model that blends art and playfulness, and this piece inspired by the Day of the Dead and Tattoo art is no exception. As I mentioned earlier, BrickCon is also a 4-day convention aimed at the “Adult Fan of LEGO”, or AFOL community. The extra time beyond public viewing hours has become the highlight of the show as I can learn from other LEGO builders. Ty Keltner has a passion for environmental Sustainability, which he shared with us in a very in-depth look at the cutting edge sustainabilty work taking place at the LEGO Group.

This year I felt like the selection of talks was excellent and very diverse. This is a testament to the caliber of attendees that BrickCon attracts, since the talks are presented by members of the AFOL community that have a topic that they want to share.

I gave a talk last year at BrickCon exploring architectural styles using LEGO. I went on to refine and present that talk at Bricks Cascade, BrickWorld, and an abridged version during the Keynote at BrickCan. That’s why I decided to take this year off! The winning model in the “Madness” themed Master Builder competition.

Games are another big draw at events like BrickCon. This year I got to participate in the “Blind Build” (Where you can see the instructions but can’t see the LEGO bricks or your hands.) I did pretty well, but wasn’t in the top 10 this time. I also participated in the qualifying round for “Master Build”, where you are given two unrelated sets, a theme, and an hour to build your best model. I was not happy with my model, and neither were the judges, so I escaped the final round. Ningago models are confusing and sometimes you need some help.

There is also an unaffiliated, unsanctioned late-night building contest to see who can build a model fastest after an intoxicating day of LEGO activities. It is a lot of fun to see people succeed, and to see when people need a little help. The theme of BrickCon 2016 is “Madness” which was reflected in some of the games and activities.

Everybody who attends these events receives a “goodie bag” containing small LEGO sets or mixed bags of LEGO bricks. They also give out larger sets in a raffle during the evening ceremonies. It’s not uncommon to take home a large set you’ve always wanted! Trophies for the best models in each category are awarded on Saturday night, and People Choice / Best in Show awards are presented on Sunday. Matthew Kay from Beyond the Brick interviews Bruce Heller about his model of “Los Angeles City Hall”.

After attending four different shows this year, coming back to BrickCon feels very familiar and comfortable. It’s also a top notch show attended by the best LEGO builders in Western US/Canada, and around the world. We don’t have the largest convention space, but the caliber of models and attendees at BrickCon is world class.