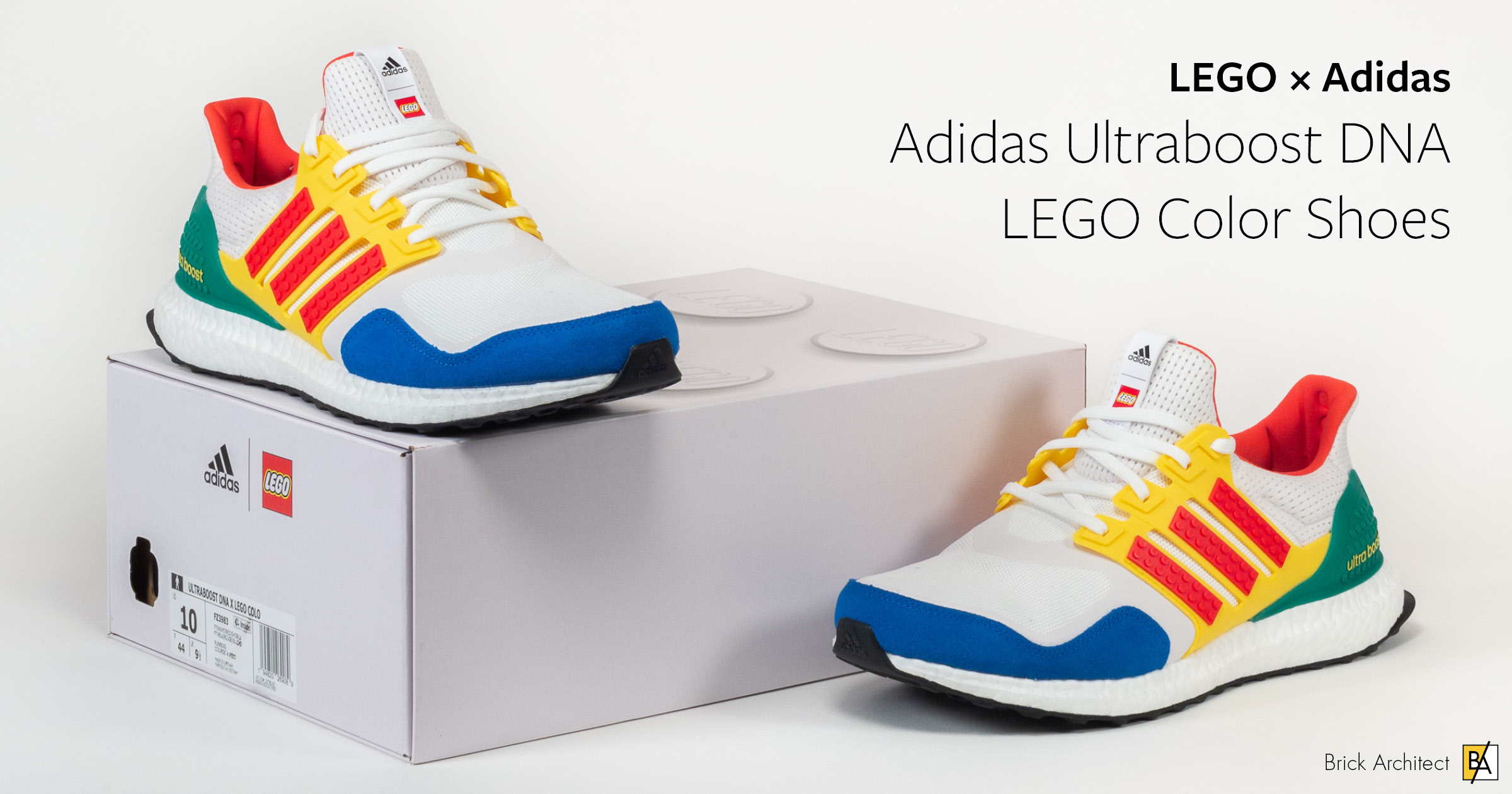 I’m not trying to keep up with all of the “LEGO ×” brand collaborations, or even all of the LEGO-branded Adidas shoes. Nonetheless, after a number of shoes that did not catch my eye, Adidas released a second pair of shoes that caught my attention for the same reason that I purchased and reviewed the ZX 8000 LEGO Shoes last year.

Here’s the thing, I’m not willing to pay a premium for boring looking LEGO shoes… I want them to stand out with bright colors that capture the spirit of the LEGO brand. The new Ultraboost DNA × LEGO Colors Shoes line includes four two-tone options, and the rainbow-colored shoes which I ordered. (The more subdued options are Blue/White, Yellow/Black, Green/Black/White, and Red/White.)

There are a couple reasons why I decided to buy a pair of the new LEGO × Adidas Ultraboost DNA shoes when I already own a similar-looking pair from the earlier ZX 8000 collaboration. For one, I plan to save the older pair for special occasions, since it was a very limited release and the first product in the line. I’m more likely to actually wear the Ultraboost shoes on a semi-regular basis since it is a less exclusive release.

I also hope that they are more comfortable! The ZX-8000 is based on a pretty old sneaker design and I found the arch to be a bit uncomfortable. Granted, the newer shoe might not be that much better because I have a wide foot, and limited-edition footwear is not usually offered in multiple widths. 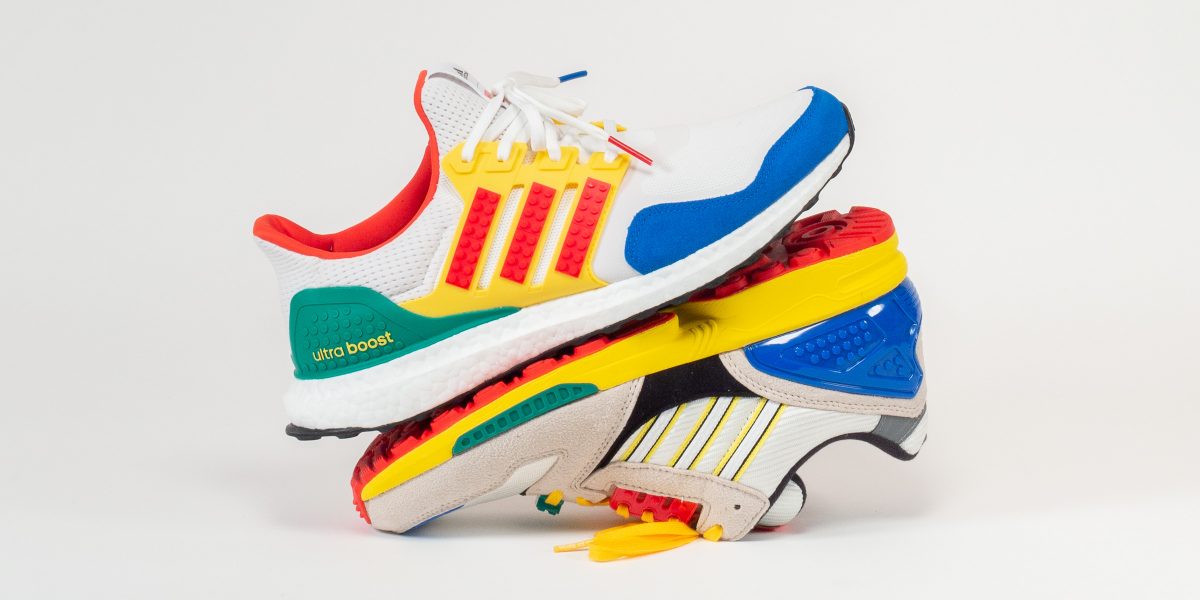 Lastly, I think this is a better looking shoe! While I like the bright colors of the ZX-8000, The thin black border on the white ribbon (which is used for the 3 stripes on each side) clashes with the chunky color blocking used throughout the rest of the shoe. The simpler color blocking of the Ultraboost is a better reflection of the LEGO brand and the most iconic classic LEGO colors.

Upon receiving the shoes, I opened the box for a first glimpse, and I’ll admit that I was a bit disappointed right away. First of all, I thought that the 2×8 pattern of LEGO studs along the side was going to be 1:1 scale with real LEGO bricks, such that I could attach real LEGO pieces if I wanted to. In reality, it is a lot smaller, and the studs are not proportional – they are much shallower, but still has the familiar “LEGO” text on each stud. 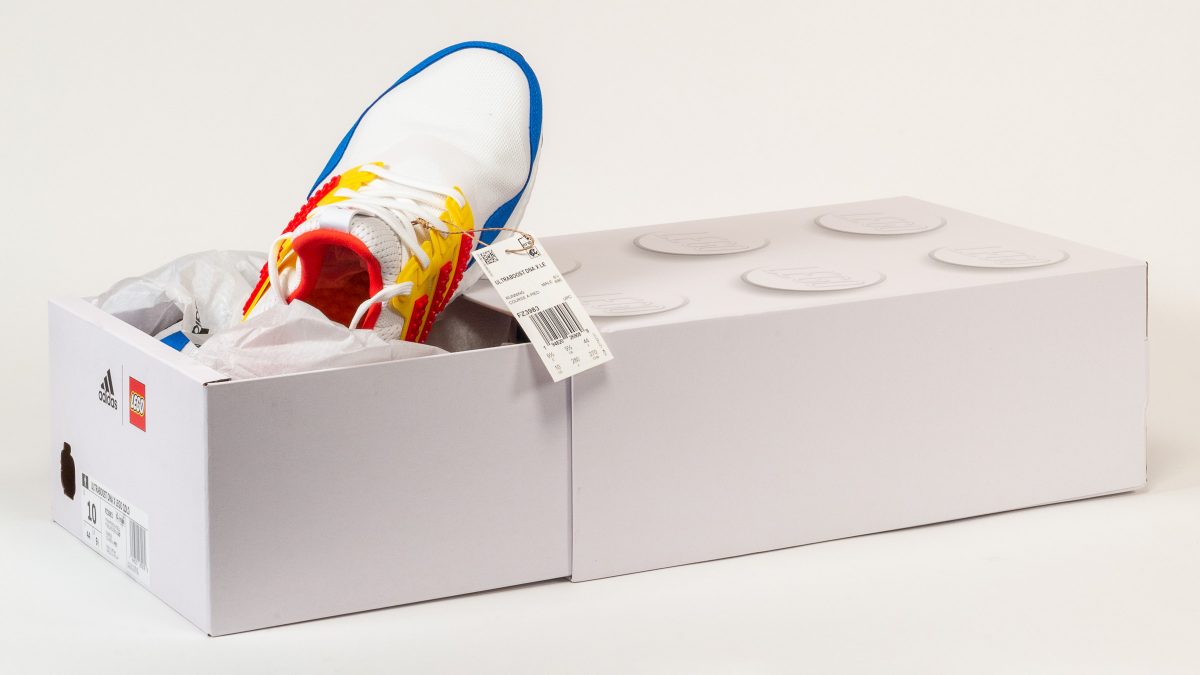 The shoes come in a slider-style box with LEGO Studs on top.

Secondly, the manufacturing is not perfect – there is a visible scuff on the green pastic right out of the box, and some blue fibers were trapped in the stark white fabric over the toebox. I’m also concerned because the outer sole is very thin and has holes in it, reducing protection of the white material that the midsole is made of. Speaking of which, the midsole has a subtle bubble pattern that looks like cheap styrofoam at a glance, rather than a premium product. (Further research shows that this is the same ‘Ultraboost’ foam used across the entire range.) 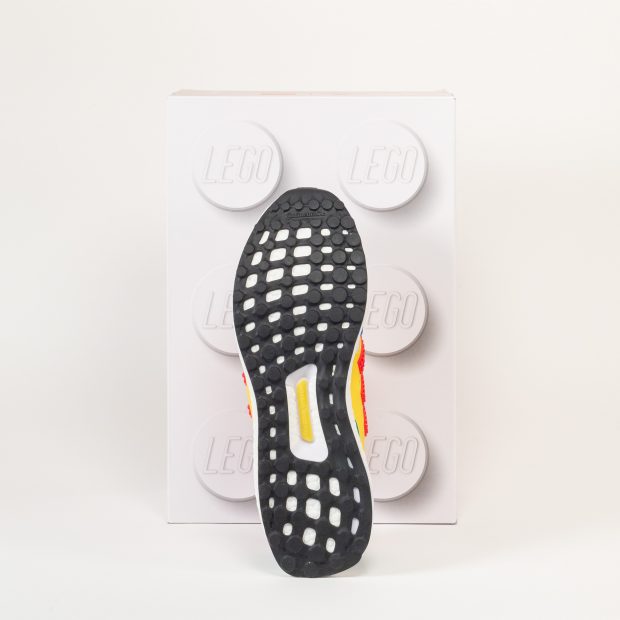 The outersole is thin and has holes in it (presumably to reduce weight).

All of that said, the red, green, blue and yellow colorblocking that drew me to this shoe online looks pretty good in real life, too. I’m just grumpy because the craftsmanship and materials of a 200$ shoe should be premium and flawless. Realistically, Unles you are already willing to pay a premium for Adidas Ultraboost shoes, you are buying a $100 shoe with an additional $50 premium for each of the two logos: Adidas & LEGO. 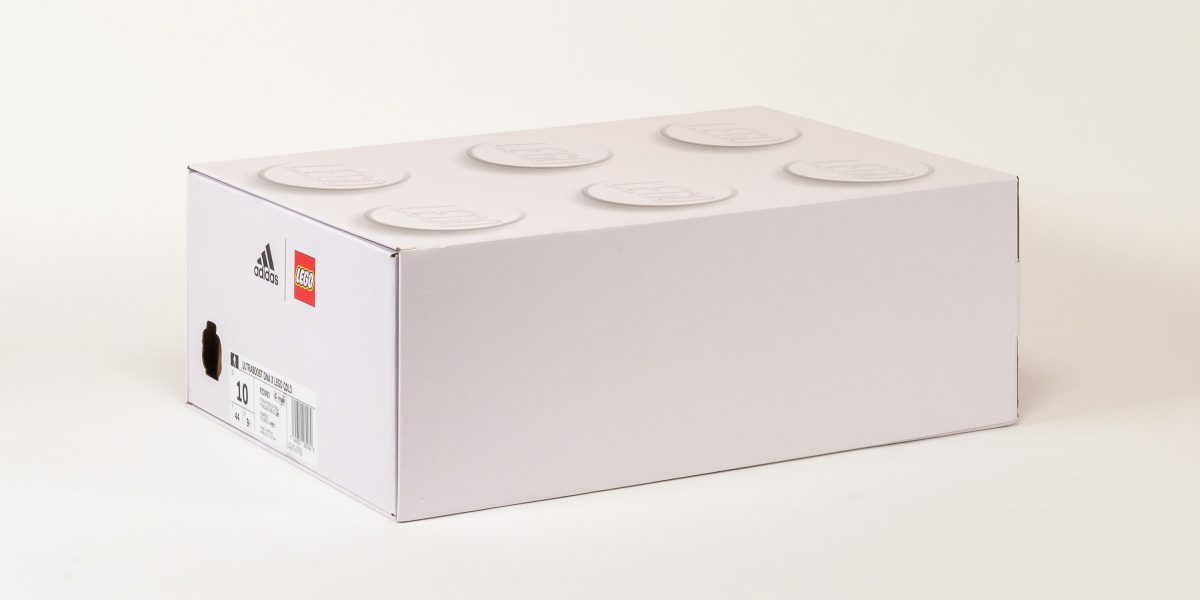 The box itself is minimalist but reinforces the LEGO brand with the 2×3 Stud pattern on the top of the box, the minfigure head cutout on the side, and white tissue paper printed with both Adidas and Ultraboost logos. A barcode is tied to one shoe with thin jute rope (it apparently includes an RFID), and a cardboard insert protects the toebox from getting crushed.

The studded insole is actually noticeable when wearing the shoe – it’s a pleasent effect similar to nubby sandals which were popular when I was in high school. 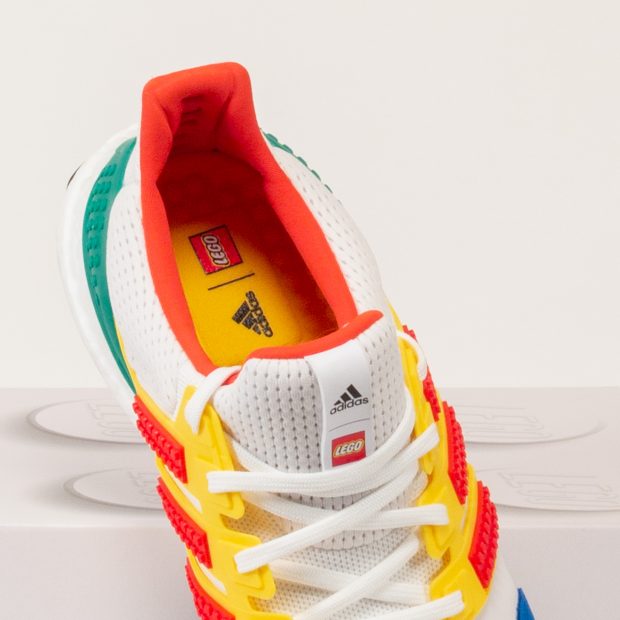 Insole has both LEGO and Adidas logos, and a pleasant bumpy / studded texture.

Despite being a physically larger shoe than the ZX-8000 (although both were size 10), it feels a bit too snug for my foot, especially in the toebox. My wide foot is not as well accomodated by this shoe. Unlike a traditional shoe, the shoe doesn’t really have a tongue beneath the laces. The shoe is snug enough that I hardly need to tie the laces at all, and it is difficult to slide the shoe on without crushing the heel. (To actually use it as a running shoe, I would need a wider size, and they don’t make one.)

Since it is based on the popular Ultraboost design, I’m sure it would be very comfortable for folks with narrower feet. As for me, it’s pretty snug and I’m not sure if it will stretch enough to ever be all that comfortable (although it’s more comfortable than the dated ZX-8000 design).

This is a much better version of the collaboration between LEGO and Adidas brands. The color blocking on the shoe is more aesthetically pleasing because each color is only represented in one place on the shoe. This results in a shoe that stands out even better when viewed from a distance.

It’s also a more modern shoe with a more refined shape. While I do not plan to take them on muddy midwinter trail-running adventures, this is a more competent shoe if you did decide to take a short urban run during lunch break at a LEGO convention. 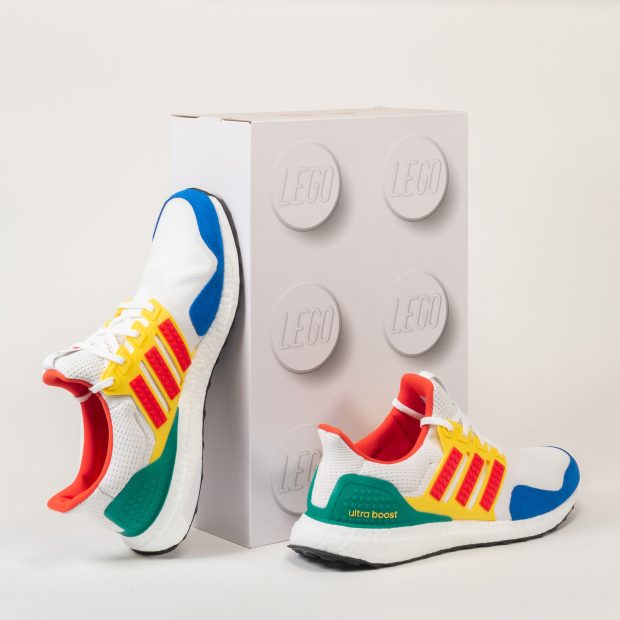 The LEGO × Adidas Ultraboost DNA shoes is good looking and comfortable (especially if you have a narrow foot).

Lastly, you can actually buy it! Stock is somewhat limited, but it has come back in stock a couple times in the past month in my size. The Adidas App is terrible and does not hold the shoe for you when you put it in your cart, so you may be disappointed when it is no longer available after you enter your CVV number to finalize your purchase. Worse still, at 180$ plus tax, it is a very expensive shoe!

Because the LEGO × Adidas Ultraboost DNA shoes are more attractive, more widely available, and more comfortable than the earlier attempt, they earn a higher 3/5 star (Good) rating. I would love to give higher marks to a LEGO-branded shoe, but it will need to be a lot less expensive, or justify a premium price with premium materials and craftsmanship. (I know that LEGO is open to collaborations at a more down-to-earth price, as evidenced by their upcoming Holiday 2021 line that’s exclusive to Target stores.)

Alternately, if you want a great LEGO building experience, check out the #10282 Adidas Originals Superstar for less than half the price. It’s one of the rare LEGO sets which earned our Must Have (5/5 star) rating — Read our review to learn more!

I hope this review gave you a better look at this rare collectible (and wearable) LEGO product. While you may be able to purchase from Adidas app or website, the easiest (and cheapest) option might be to search for them on eBay. Good Luck!
I purchased these shoes with my own money. Even when products are provided for review, we review products fairly and do not guarantee a positive review. Photos in this article by Tom Alphin unless otherwise noted. Visit the About page for more info about our journalistic standards and affiliate programs.